I kept reading all these people's journals with their interesting lives and livestock, and thought that I would never have enough to post a journal of my own without it being boring, but we'll besides that fact let's try it out!

I live on 7 acres of land only four of which are usable all year round (the other 3 only half the year due to flooding) in southern ontario; with my dad his parents his youngest sister his fiance and her mother... (so many people ). We have two dogs, both of them smaller breeds, my dog cora is a pug mix and hurcules is a dashund.
When we started out our little farming adventure we stepped into it with the mindset that we wanted to provide better food for our family! And with that we were off to the auction! And came home with what we thought were 8 laying hens, but to our suprise and dismay one of our hens started crowing a week later (no wonder becky wasn't laying

). Apparently "becky" wasn't a hen, but the name stuck so becky he stays .

Fast forward a few months later, we decided to get into bigger livestock and did our research deciding on three large English black piglets our girls were named suey, suey, and our castrated boar bacon. It took lots of time and hand taming and frustrating hours but they eventually became like full blown puppy dogs where If i wanted i could fall asleep in their pen and the worst they would do is fall asleep on top of me. They were amazing animals and as I discovered they were very smart. (We raised them to 300lb or a bit over, they were huge. Thinking of a breeding pair this next year) 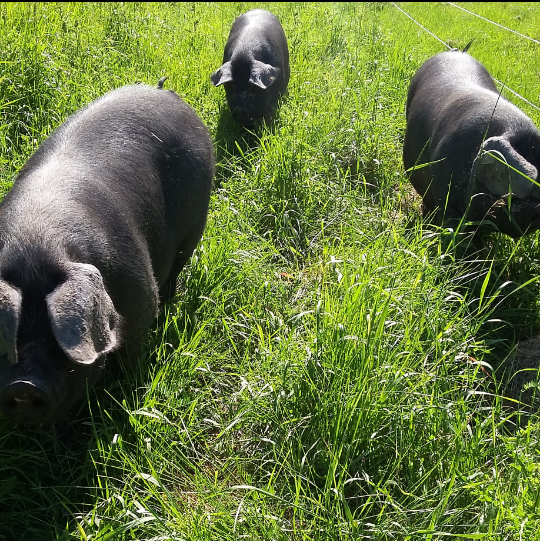 When our piglets were about a month old my dad went back to the auction near us looking for some food dishes and poultry cages for selling birds later on. I happened to be babysitting at the time and suddenly got a message from my cousin who had went with him telling me not to be angry when I saw him, and didn't bother explaining why I would be angry. So later on that night I went back home to find him bottle feeding a tiny little baby goat only a few weeks old and not even weaned yet.... she was barely 9lb and honestly didn't look like she would make it.. neither of us knew how to raise a baby goat so it was a lot of trial and error (more error than not) but somehow that goat has survived
This is her about 2 weeks after we got her she had put on around 5 lb so was looking stronger but was still pretty small. 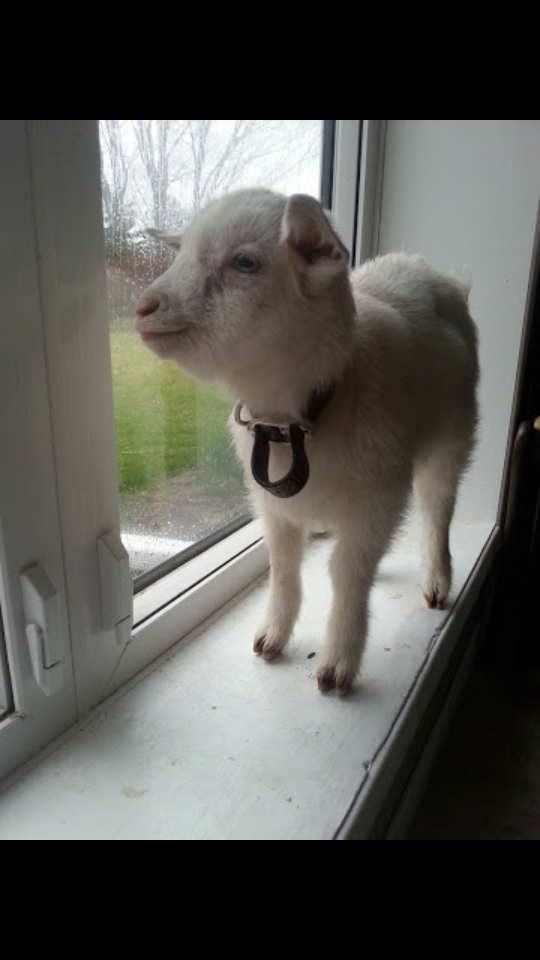 As she grew up she eventually got too big to be in the house so one $1000 dollar fence later we had our hundred dollar goat safe and out of the house in her own little pasture. One issue we discovered was that goats are herd animals..... so back to the auction and home we came with rosco our (I think) nigerian billy (correct me if I'm wrong) 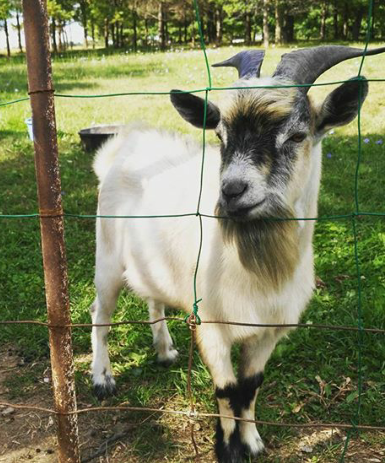 A sweet little boy who had quite the personality, and about s month after getting him (which we should have known he was a FULL male) we noticed newton was gaining some weight and thought that she was just getting fat. We changed their food to try and discourage her getting over weight but found her belly was only getting larger. ... so my dad did some research and found there was a possiblitly she was pregnant.... and that the date she was bred around will have her dropping in the coldest month out here.. and we were nowhere close to prepared. So one homemade shed later both of them were situated quite comfortably for the winter months. But in the end we weren't able to keep rosco and had to find him a new home and newton now lives closer to our house in an old smoke shed with a fence so she can go in and out as she pleases.

Like we didn't learn our lesson with the goat, a few weeks back we brought home a young katahdin ram we named Gordon RAMsey and the next day a pair of mothers with 3 month old ewes and one katahdin barbedos cross.
When newton drops her kid she will be returned to her old enclosure baby in tow and in her pregnancy enclosure we will be setting up for more piglets, wish me luck.... it's starting to get crazy here lol. Newton was a doll! Can't wait to see her kids!

luvmypets said:
Newton was a doll! Can't wait to see her kids!
Click to expand...

She was a fun one to raise! I'm hoping they get their dad's color but look like their mom, stature wise lol.

Well, there ya go...and it didn't even hurt a single bit, did it? Ya even included some pics, too.
I'm hooked and will be keeping up with your Journal now, too....

CntryBoy777 said:
Well, there ya go...and it didn't even hurt a single bit, did it? Ya even included some pics, too.
I'm hooked and will be keeping up with your Journal now, too....

Lol thanks, I'll try and keep it interesting lol.

Just keep it "Real" and it will be interesting enough, because "Life" for others in other parts of the country and world is always more interesting than the same ole, same ole in their "Daily Routine".
"Life is an Adventure" and we can always learn from another's situation....and sometimes share personal experiences that can assist them with theirs....

My dog cora has never really officially been introduced to the sheep before, she always goes into the pasture with me but they kind of keep their distance from each other. So today I was in taking photos of my flock in the snow, so as usual they came to investigate my camera. Poor cora just happened to be sitting beside me at the time and found herself suddenly surrounded by overly curious creatures who were over four times her size

I'm glad we raised her the way we did, they were just sniffing her and when she had enough of them investigating her she made a little noise and pushed her way through the wall of sheep and went about her buisness. She's my good girl 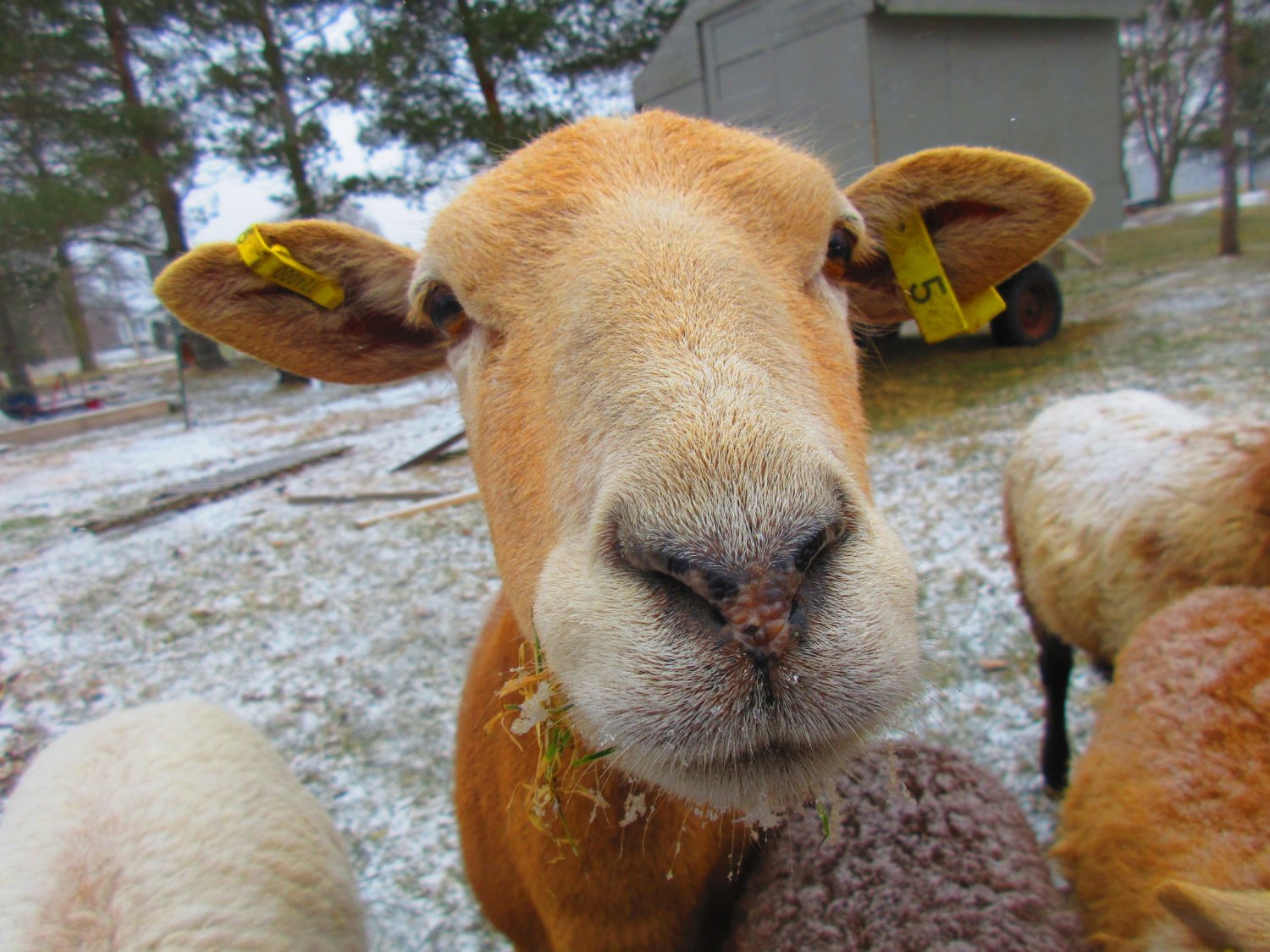 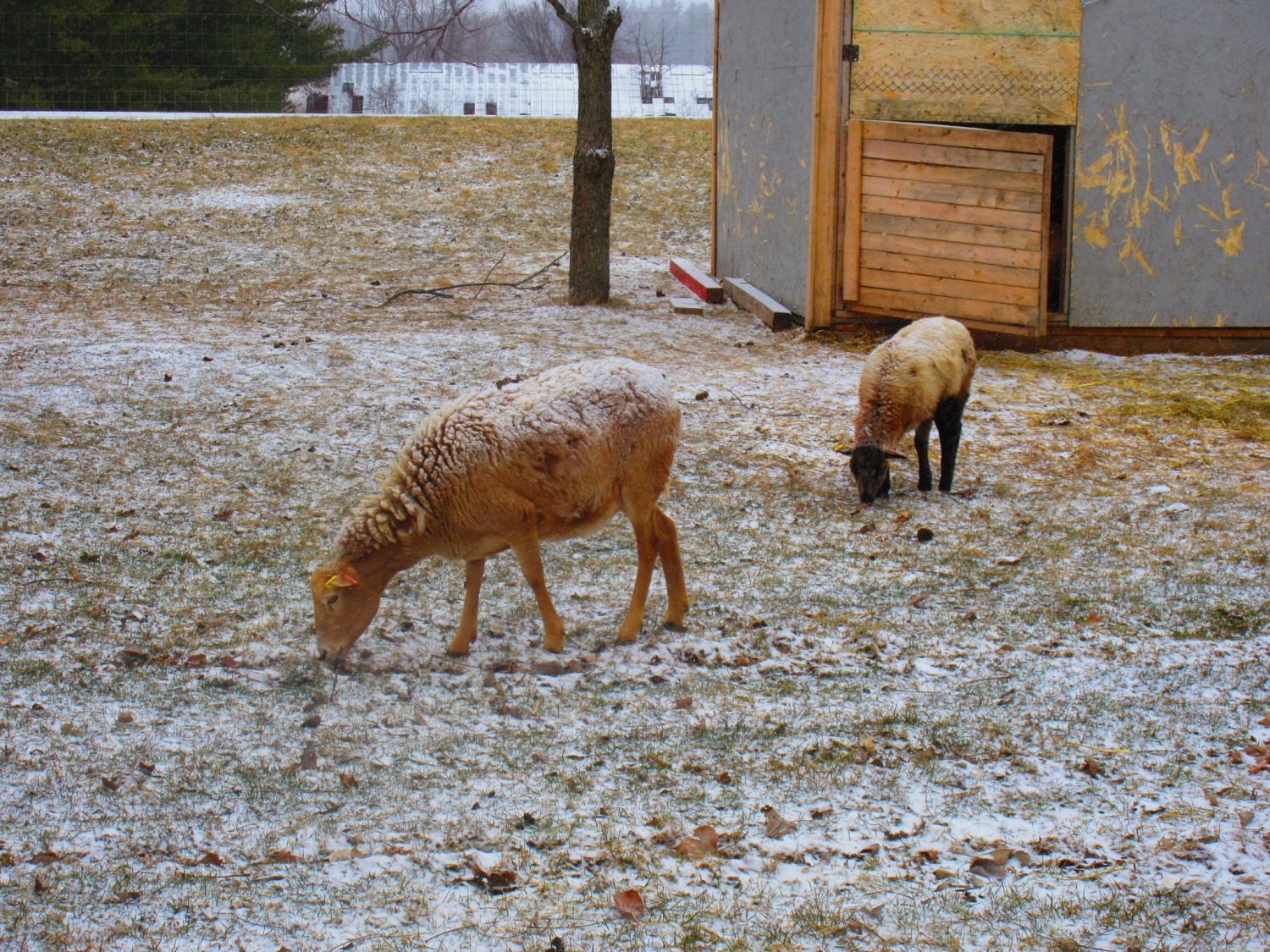 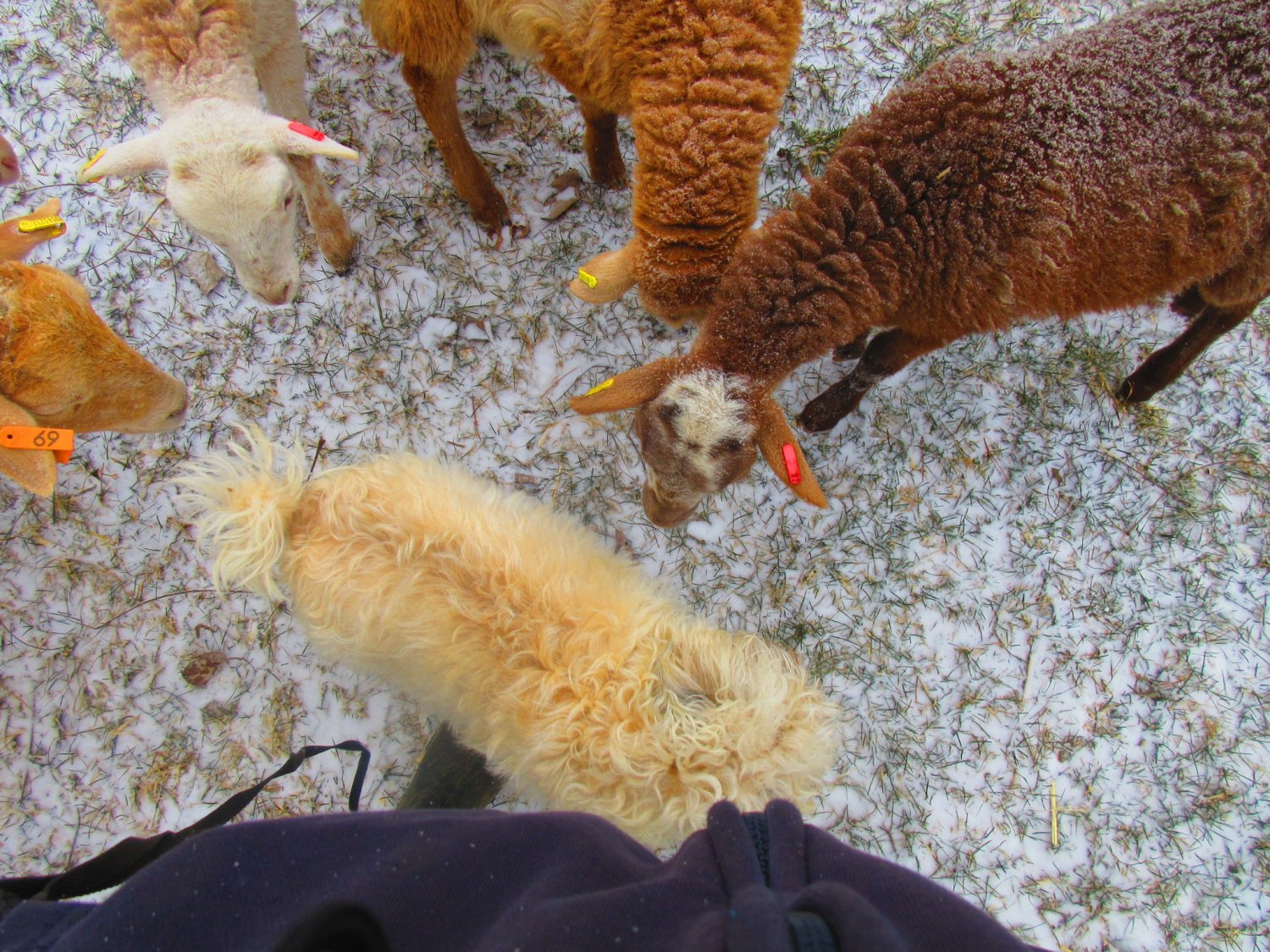 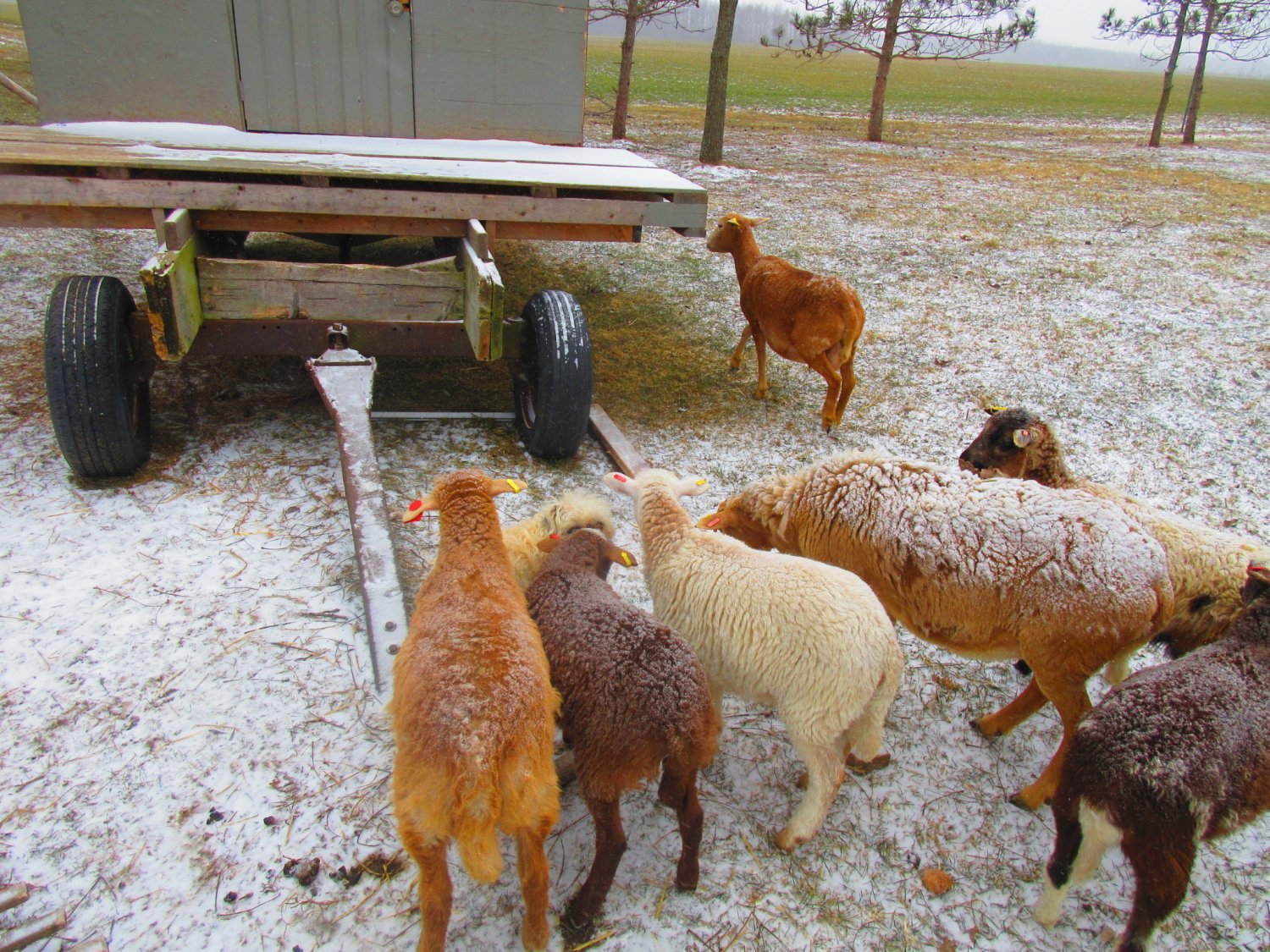 Any other dog probably would have reacted badly to that situation unless trained other wise.

Update I just went to go refill their water bowl since theirs was frozen and she was playing with the lambs like she would another dog running back and forth. They would charge at her playfully and she would do all these playful manuvers and then run a circle around them! They absolutely loved it and carried on for a good 5 minutes

newton the goat said:
Update I just went to go refill their water bowl since theirs was frozen and she was playing with the lambs like she would another dog running back and forth. They would charge at her playfully and she would do all these playful manuvers and then run a circle around them! They absolutely loved it and carried on for a good 5 minutes

Be a bit careful with the chasing, I was sold 100lb Katahdin lambs one year that had had their tails "docked" by the family's pet rat terrier.

That said, I already love your journal! Your sheep and goats are beautiful, can't wait to read more about them (and come on Newton the actual goat, hurry up with the whole babies thing). Thanks so much for posting!
You must log in or register to reply here.
Share:
Reddit Pinterest Tumblr WhatsApp Email Share Link