Nicot system, even split, walk away split, or typical split?

Just wanted to ask if anyone has any opinions on the best way to multiply honey bee hives.

We tried the Nucot method last year, but we made a number of mistakes:

1. Used a smaller, weaker hive when beginning the process [only got 25-30 queens instead of the full 110].
2. Did not carefully keep track of the time [lost some queens in the process].
3. Did not have enough bees, eggs, larvae for the nearly 30 queens we hatched [threw away 20 queens].
4. Installed robbing screens on the nucs, causing many of the returning freshly mated queens to not be able to return to their nuc [lost over half our nucs].
5. Started the process way to late in the season [August heat wave killed a number of our queens].

We are thinking of trying the Nicot system again, but this time adjusting our methods to alleviate the poor results.

1. Use a super strong hive when beginning the process [we should have 100+ queens instead of the meager 20-30].
2. Keep careful track of the time [keep a daily journal].
3. Wait until we have several strong 20+ frame hives, then be able to set queens in healthy nucs.
4. Do NOT install robbing screens on the nucs. AND, make certain to set nucs all around the property, each nuc a minimum of 25 ft. apart.
5. Start the Nicot process in March or April, not in August heat wave.

Other options include the even split, walk away split, and typical split.

Some pics of the Nicot system included. 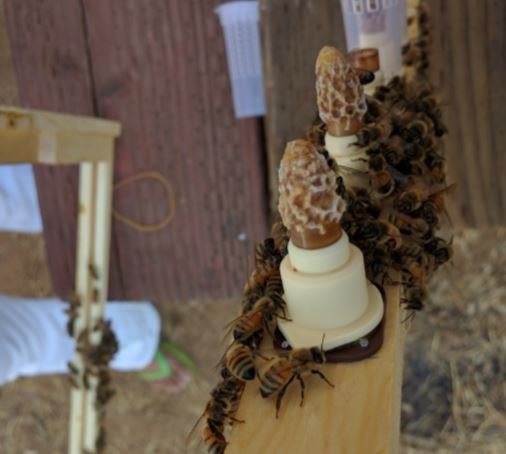 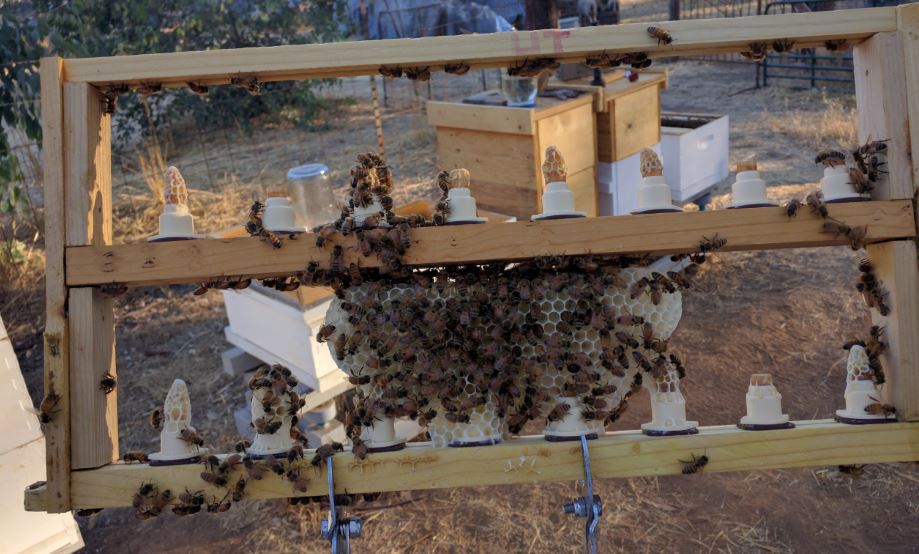 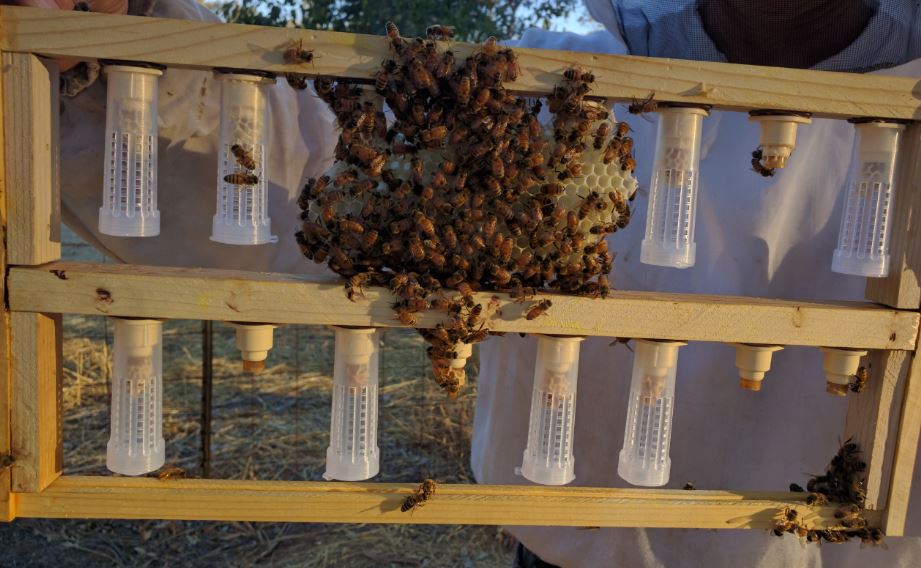 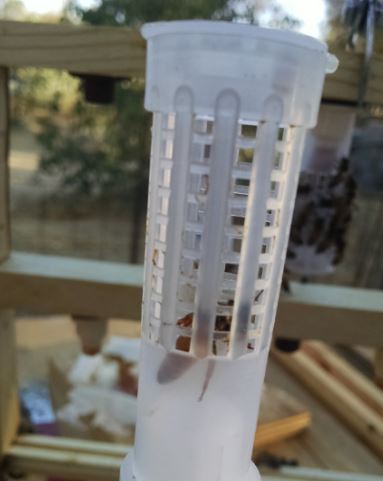 How many full size hives are you running, and what is your target number?

Did you sell a bunch of hives? I thought you had more that that before winter?

I'm holding to 3 hives at the moment. Possibly a 4th at my MIL's house to take advantage of the mandarin's and her HUGE tulip poplar tree. I'm not wanting to expand until I figure out if I'm allergic or not. I'm trying to be super careful and not take any chances of getting stung, but I'm sure it will happen at some point.

Happy Chooks said:
Did you sell a bunch of hives? I thought you had more that that before winter?

I'm holding to 3 hives at the moment. Possibly a 4th at my MIL's house to take advantage of the mandarin's and her HUGE tulip poplar tree. I'm not wanting to expand until I figure out if I'm allergic or not. I'm trying to be super careful and not take any chances of getting stung, but I'm sure it will happen at some point.
Click to expand...

Thanks for your reply. Well, first of all, I highly recommend you obtain an Epi-pen if you are not sure if you are allergic to bee stings. The Epi-pen saves lives big time if you have a severe reaction to a bee sting. My wife and I are not allergic to bee stings, but our Doctor prescribed an Epi-pen just for good measure. So we keep it in the refrigerator. Somehow it was free for us.

On very rare occasions, we have both had stings that developed into infections...my wife somehow had a sting that developed into a large infection on her hand, and she needed antibiotics, steroids for the swelling, pain meds for the pain, and anti itch meds too. It was extremely serious. I have averaged getting stung 10+ times per year, and now I am super careful to monitor the still site. Most of the stings I receive are gone within a day or two.

I rarely use gloves anymore, rarely cover my arms, and sometimes use the veil to cover my face. 99% of the bee stings I have received were simply because I was trying to get too much done in too small of a time frame. If you take your time and do it right, bee stings are incredibly rare.

Regarding our numbers of hives...

I made many, many mistakes with the Nicot system last fall, so that is why we did not achieve higher numbers. It was the very first time I tried it, and now a part of me wishes I had simply done walk away splits. So much easier, so much more successful, unless you know how to do the Nicot system well.

The Nicot system has a much higher learning curve, and if done correctly, you can easily multiply 10 strong and healthy hives [20+ frames each of eggs, larvae, pollen, and honey] up to 50 very strong nucs in just a matter of weeks. It is actually quite fascinating to do too.

I listed 5 mistakes we made in our original attempt to raise queens and nucs with the Nicot system. 3 of the mistakes were huge and actually very deadly. If we had not made those mistakes, I am convinced we would have easily had a minimum of 30+ new hives.

I believe our biggest mistake was the poor timing [the new born queens had to do their mating flights when we were in the middle of a week long 105F heat wave. This was a massive mistake. Splitting hives and raising queens in our area in the August heat is simply not a good idea. I was impatient and wanted to try it anyway. Also, you should never use a weak, wimpy hive as the starter hive, yet that is exactly what I did. Last, installing robber screens before the virgin queen as done her mating flights is a HUGE no no. Most of the newly mated queens could not find their way back through the robber screens. I learned many painful lessons and most of it was based upon impatience on my part...I wanted to try even if it was too late in the season, rather than wait another year.

This year, I plan on going much more patiently, have the correct timing, and use the strongest hive of all for the initial part of the process. I believe we will see a radical difference this year...

I do have an epipen. My hope is that if I can go with some good time between stings, maybe the reaction won't be so bad. (probably wishful thinking) My last sting came with full body hives and ear canals plugged. Luckily for me, benedryl took care of it. I told my husband if I wasn't better in 20 minutes, we were going to the hospital.

I looked into allergy testing, but they aren't 100% effective. The only one that is 100%, you have to sign a waiver (for anaphalactic shock) and they sting you like 100 times. I can do that in my back yard. So, I'm just covering up really well and seeing how it goes. If I am allergic, the next sting should be a worse reaction. (which I'm not looking forward to, because the last one was not fun)

Well, I hope you do not develop a severe reaction to the bee stings. For me, the first time I was stung, I felt like it was the end of the world...so painful. Now, I often barely even notice the sting...but on rare occasion, the sting will hurt really, really bad after a few hours...I think it may depend upon how much of the bee venom was injected into the sting site...

A while back I was stung 25+ times by yellow jacket subterranean wasps [I accidentally ran over their nest with my tractor]. Now that was painful. Most of the stings were on my face and head. My doctor told me to go to the ER room immediately. I thought I would wait it out for a few minutes to see if there would begin a serious reaction. Nope, no serious reaction...just a lot of pain.

I rarely drink alcohol, but I found a solution that worked for me...I asked my wife to drive to Walmart and pick up a pack of Benadryl and a quart of vodka. Needless to say, the last thing I remember that evening was telling my wife that I did not feel any pain at all!

Two weeks later, the skin on my scalp was still breaking open and oozing wasp venom and I was still itching like crazy...

Well, we just removed the first starter cells from a super hive. 5-6 cells are being built up by the bees even as I write. Then we added 6-7 more queen cup cells this afternoon. This is incredibly exciting.

As an experiment, we did a walk away split with the same hive used for the Nicot system. It will be interesting to discover which method does better.

Here's a frame of these hard working bees. 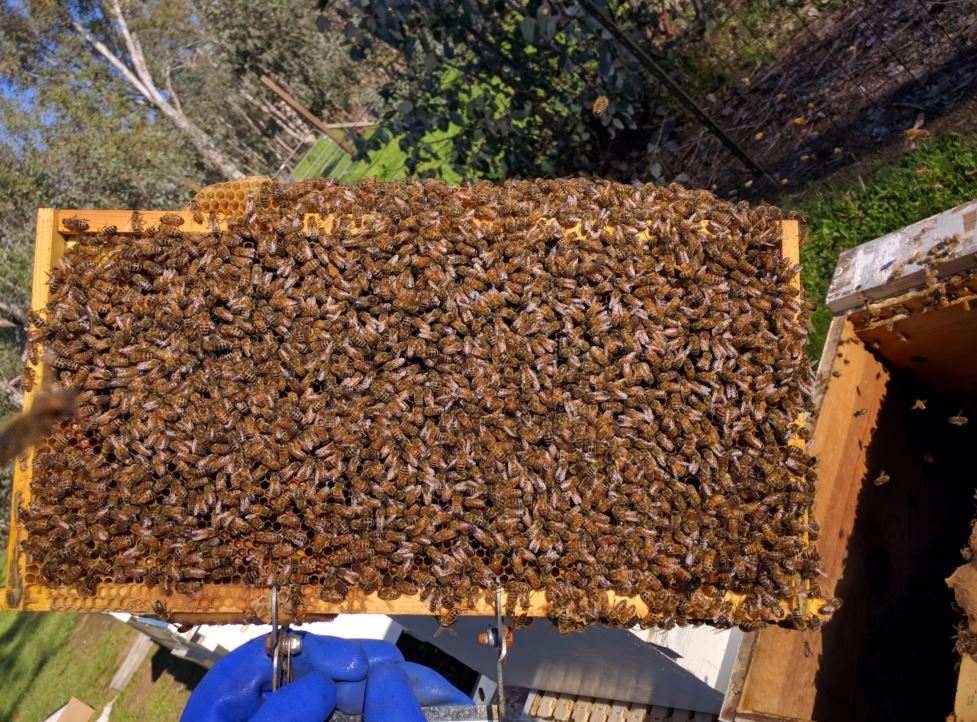 Here is another frame. 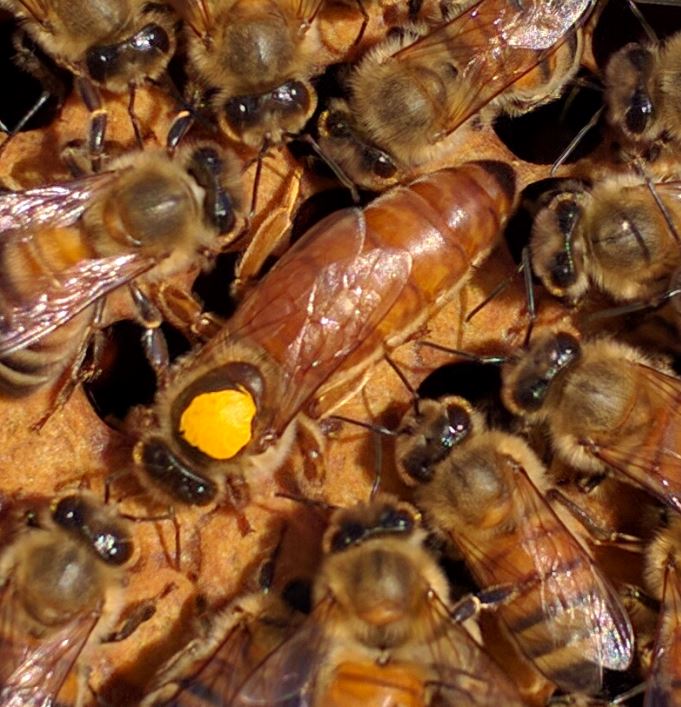 And let's not forget the Nicot system with 5-6 two day old cells being built, and 9-10 new larvae cells installed today!

And finally, either swarm or emergency cells from the hive finisher...probably due to leaving the Cloake board on for too long! BTW, we did a walk away split and placed 8-10 of these queen cells in the split. 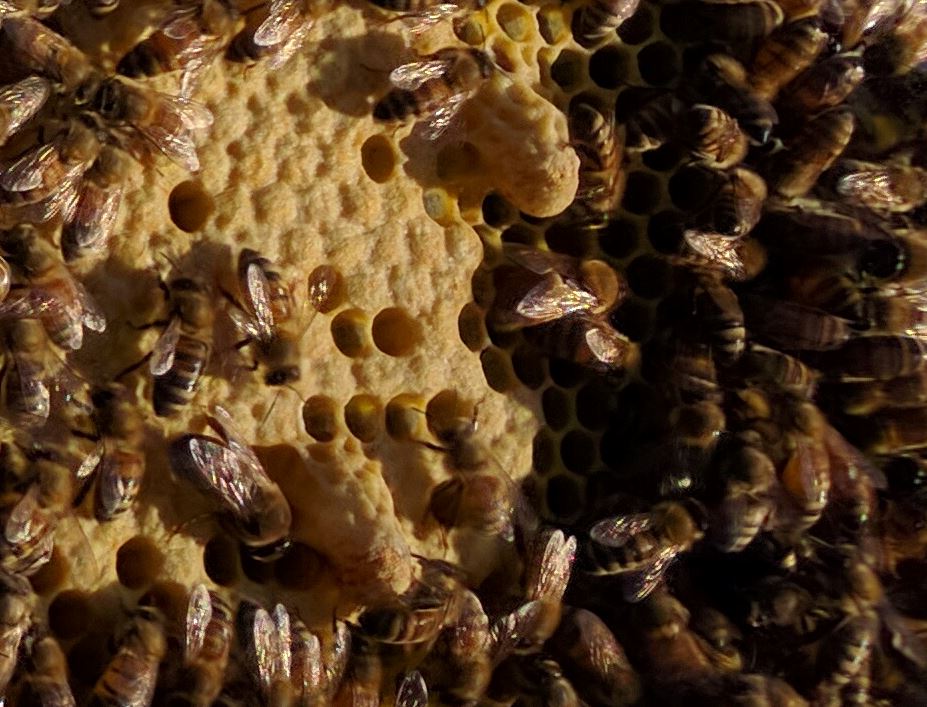