Preface: This is a long story that is not over yet. I will split up what has happened so far and update as we go. We love our LGDs and are always learning from them and about them.

Our first LGD we acquired as a pup, a male named Shep who was 3 months old. We were looking for a maremma, but settled on Shep because he was said to be half maremma and half Great Pyrenees and was raised with chickens. When we went to pick him up he was actually sleeping in the chicken house and didn't want to leave.

Being new to LGDs and raising mostly poultry, this seemed ideal to us. We brought him in at night as our coyotes are quite large and we had no mature LGDs to keep him safe or show him the ropes. We spend every moment with him attached to us at the hip. We fed chickens with him. We did parameter walks around the edge of the property with him.

We knew he would need backup as soon as possible and we were really set on getting a maremma to pair with him so when a working registered litter became available just a few hours away from us, we got him a buddy. Her name was Lana. We had her just a few days when we realized that something was not quite right with her. She was just a few months old, but bit us all and wouldn't release. She bit the crown of my head while I was bent over a task. She bit several of my fingers until blood dripped down them. She charged and bit my chest. She was happy go lucky and very attached to me and to Shep, but would drop her head and spread her legs in the front and growl in a split second before lunging to bite someone. Shep still adored her and would watch over her while she slept, but he was fearful of approaching her and she was half his size. When she bit Shep on the face and left puncture wounds (that would take a few months to completely heal up) the breeder offered to take her back and we accepted. She is still there under her parents' supervision and is said to be doing well.

Shep was now 6 months old and very sad to be buddy-less. In this lull of loneliness and boredom, he realized that if he ran into the chicken flock they would flap and scatter. We made the decision to move him to the fenced in pasture that surrounds the chicken yard so that they were safe from his youthful games and he could continue to observe them. We continued to take him in on a tether when we tended to the birds. One duck thought it would be a good idea to visit his side of the fence and did not survive the experience. We made it clear how disappointed we were with his handling of the duck. Shep wouldn't look at me for a full day. (He did this again later with a chicken and hasn't again since.)

Meanwhile I had been keeping an eye out for another potential companion for him. Before I share how that all came to be, I will say that looking back, we feel incredibly lucky. It very easily could have gone much differently, but it didn't.

I first saw a post about Annie in an LGD group on Facebook. Her first owner had posted asking for help and advice as Annie was a maturing female said to be half maremma, half GP and the adult female in her pack decided she had to go. Looking back at other posts about her, she had been attacked in November by the older female dog and again several times between then and in March when I saw the post that her owner wanted to rehome Annie and try to work with the older dog as she knew the older dog would be put down if surrendered or adopted to someone else. Looking for a female, I asked where she was located and wished her luck when she told me she was in New Mexico as I am in Ohio. Annie's owner at the time was not deterred by the distance between us and offered to make the trip if we wanted to give her a shot. She sent me a few photos... 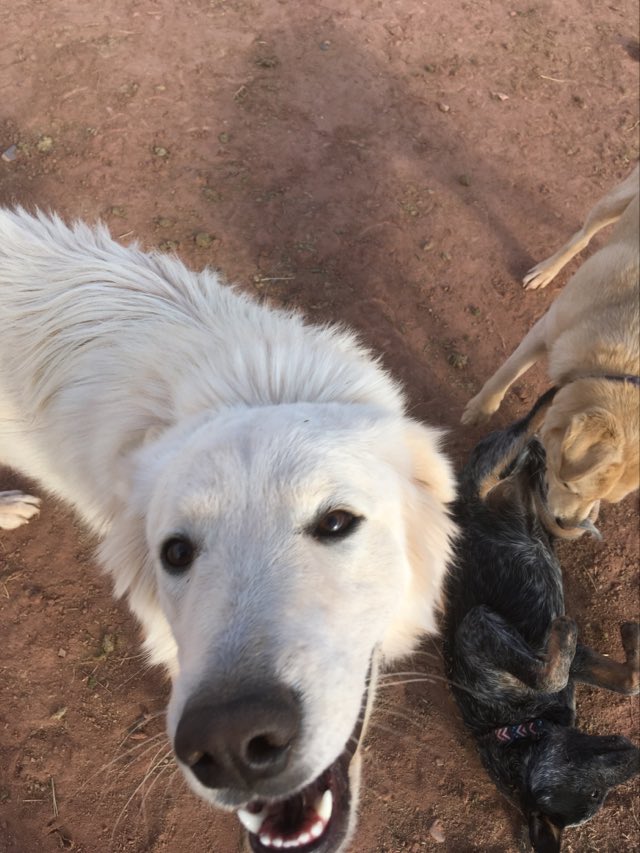 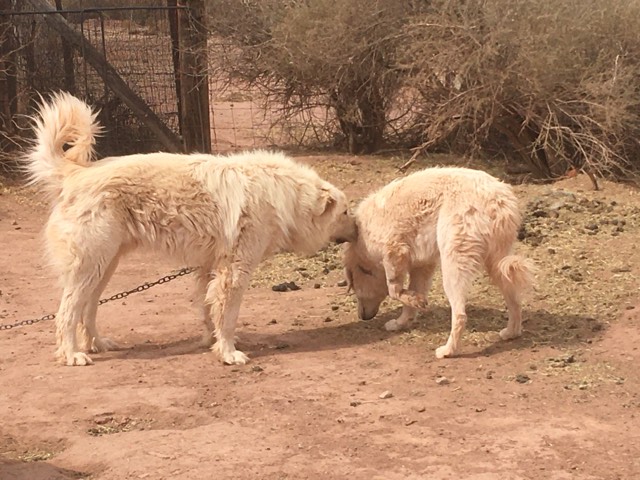 ...and said Annie was starting to have the confidence to go after coyotes, was an escape artist, and was great with her large stock, but hadn't been proven with poultry. We thought about it for a bit, and decided to give her a shot. Her owner called from Oklahoma and said Annie had developed a limp on the trip.

She got to Ohio early April. One front leg was shaved where she'd just had her most recent stitches out and the other had some scabs from a new squabble. My heart sank when I saw she wasn't using her back left leg at all. She was scared about the whole situation and her fur was full of desert sand. 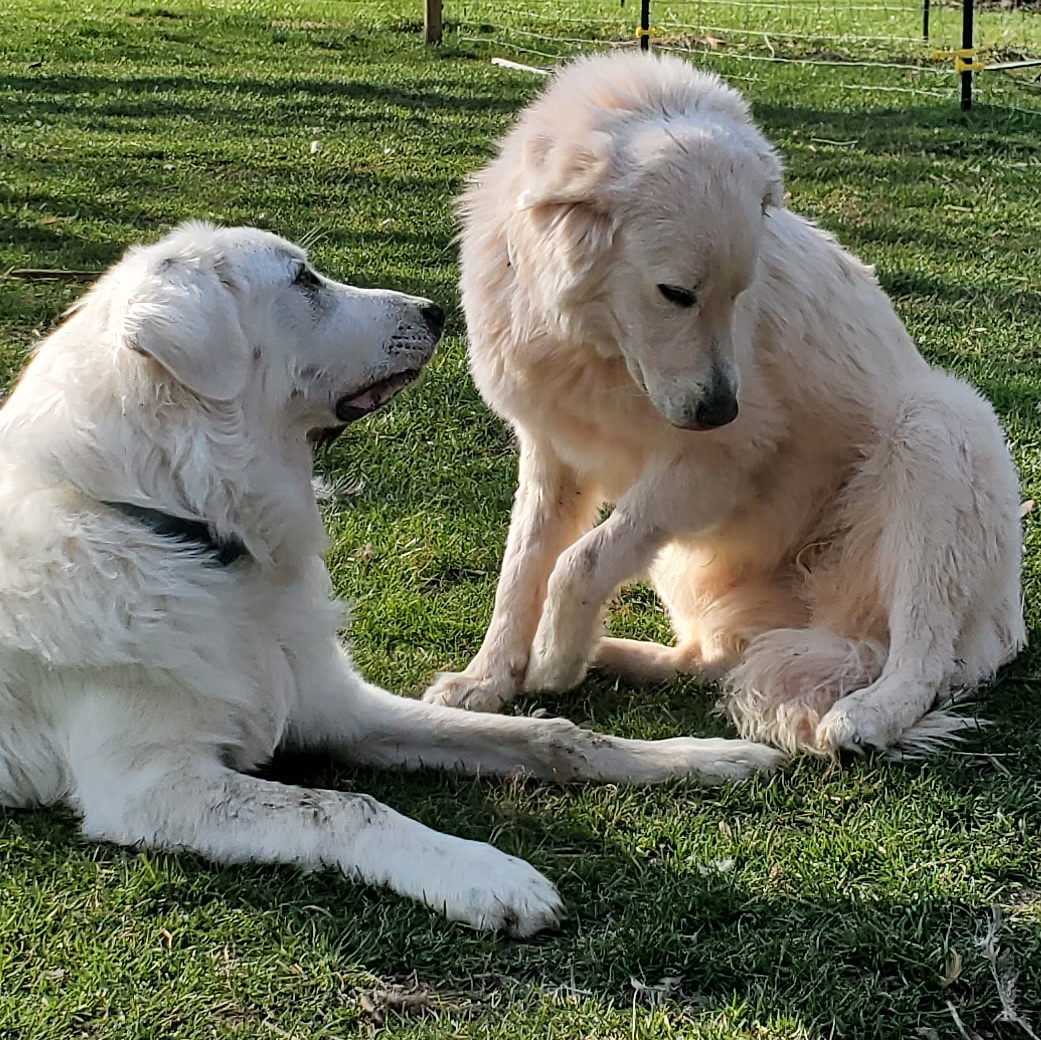 I was proud of how respectful Shep was of her. Although half her age, he outweighed her and was already taller than her. Being a pup, he really wanted to play with her, but she just wasn't up for it.

My vet got her in that afternoon and the lady said she would be sticking around for a while to make sure it worked out. The vet said torn CCL was likely, but found fresh bite wounds on that same back knee that were likely gotten right before her trip across the country that her first owner was not aware of. We really needed a buddy to work with Shep, but not a huge vet bill for a dog we just met. We weren't sure what to do.

And then she started to blossom. And eat. And heal. Her leg regained full use within about a week. And she bonded to us in a way that was unexpected and beautiful. 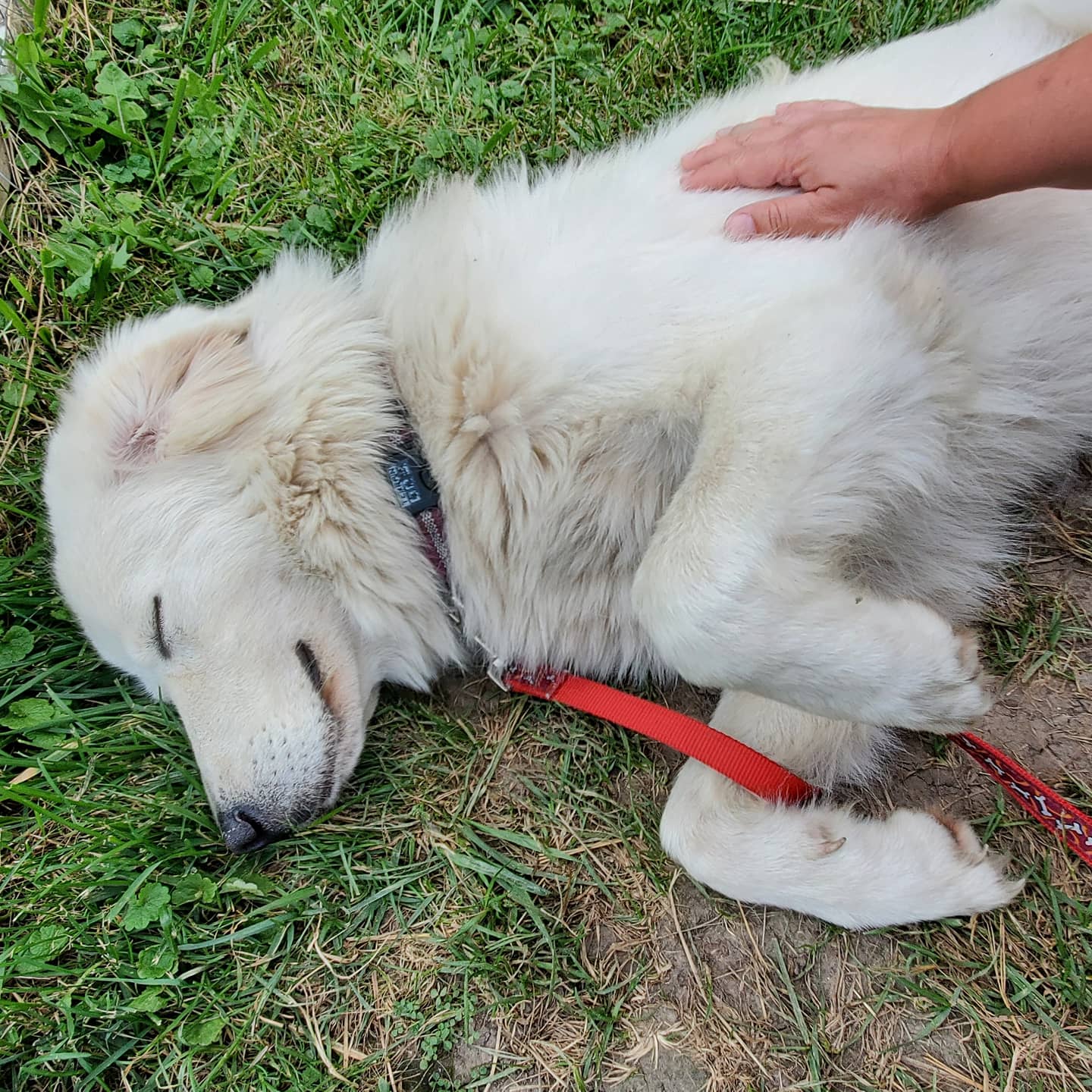 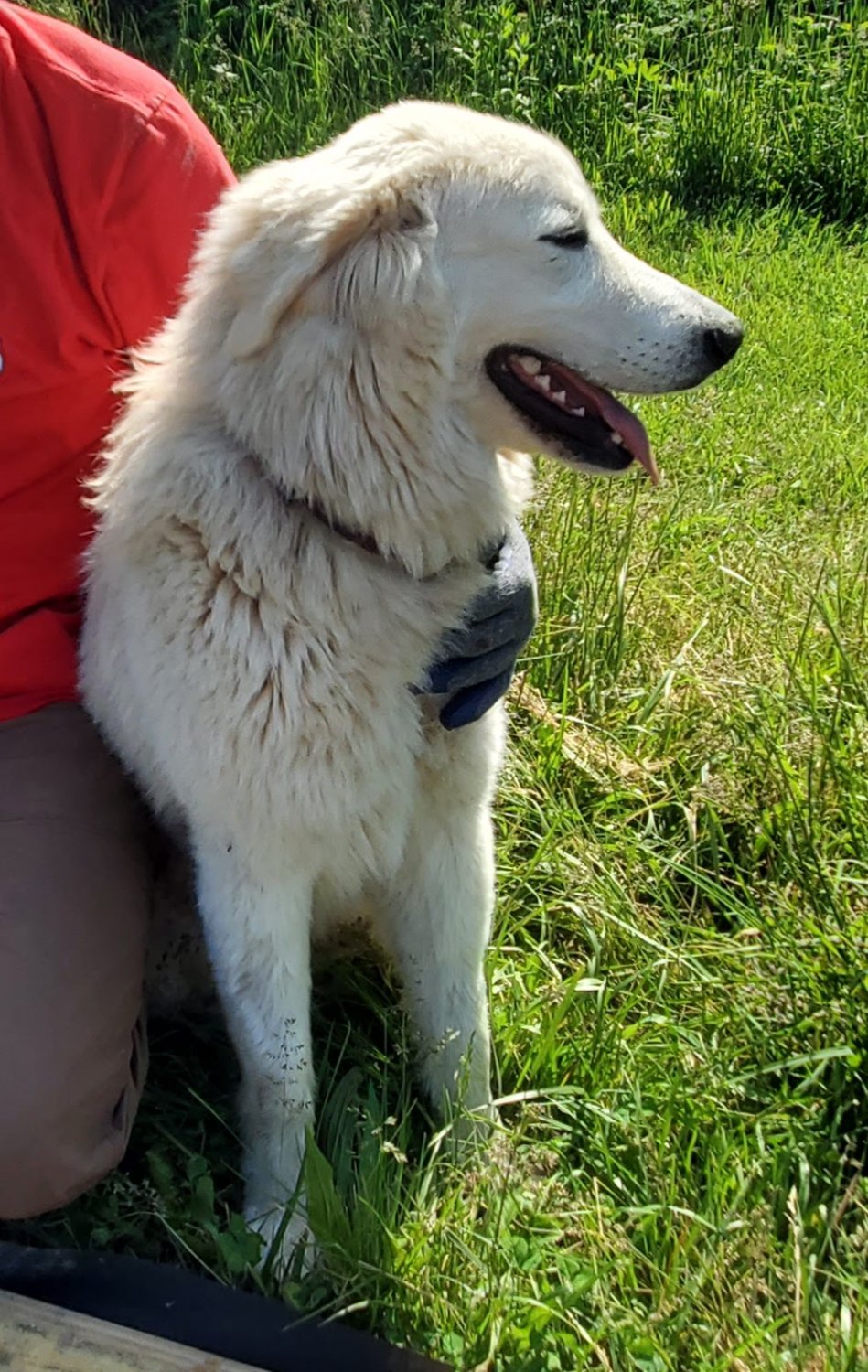 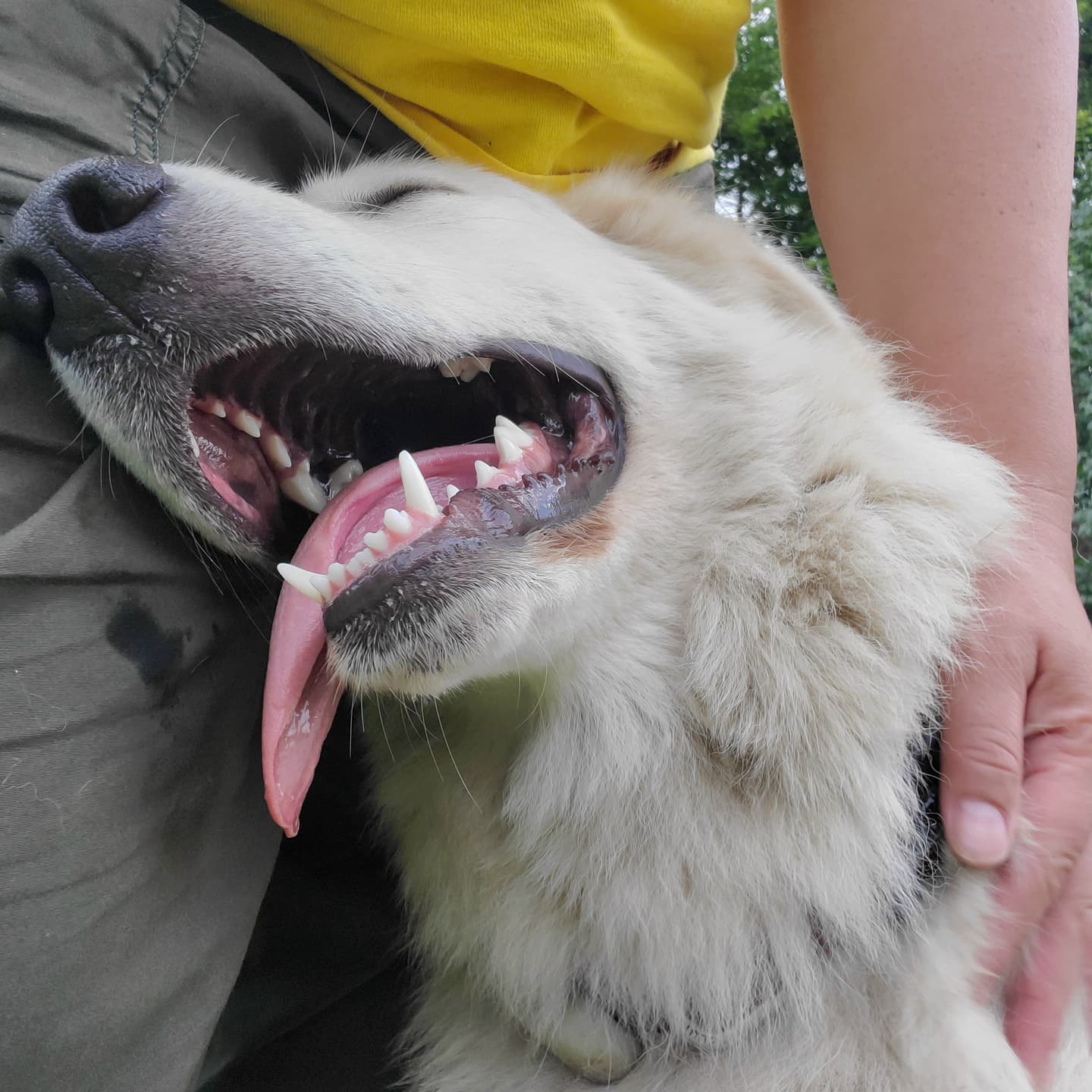 We had doubts that there was something else in her and wanted to see what her deal was and make sure we were going to be able to work "with" her genetics and decided to do an embark dna on her and Shep both. Turns out we were surprised with both of them. She is roughly 40% maremma, 30% GP, and 30% anatolian shepherd. Shep came back 100% GP. Not what we expected, but we could work with this.

Not being experts at this, the only way we knew to start with her was to do like we would with a puppy. Love them, have expectations of them, trust them with responsibilities a bit at a time, and give them freedoms as they prove they're ready. Annie joined Shep on parameter walks on Day 1. She was sensitive to his cues and although cautious at first, she wanted to work with him.

She went with me to check on the poultry on a lead and was calm and steady. I looked up soon after we got her and saw that she had wiggled in to visit the ducks. I held my breath as I tried to walk calmly toward them, hoping that all would be well when I reached them. Nothing happened. She has a thing for duck eggs, we realized, but was happy to just lie down near them and watch over them. 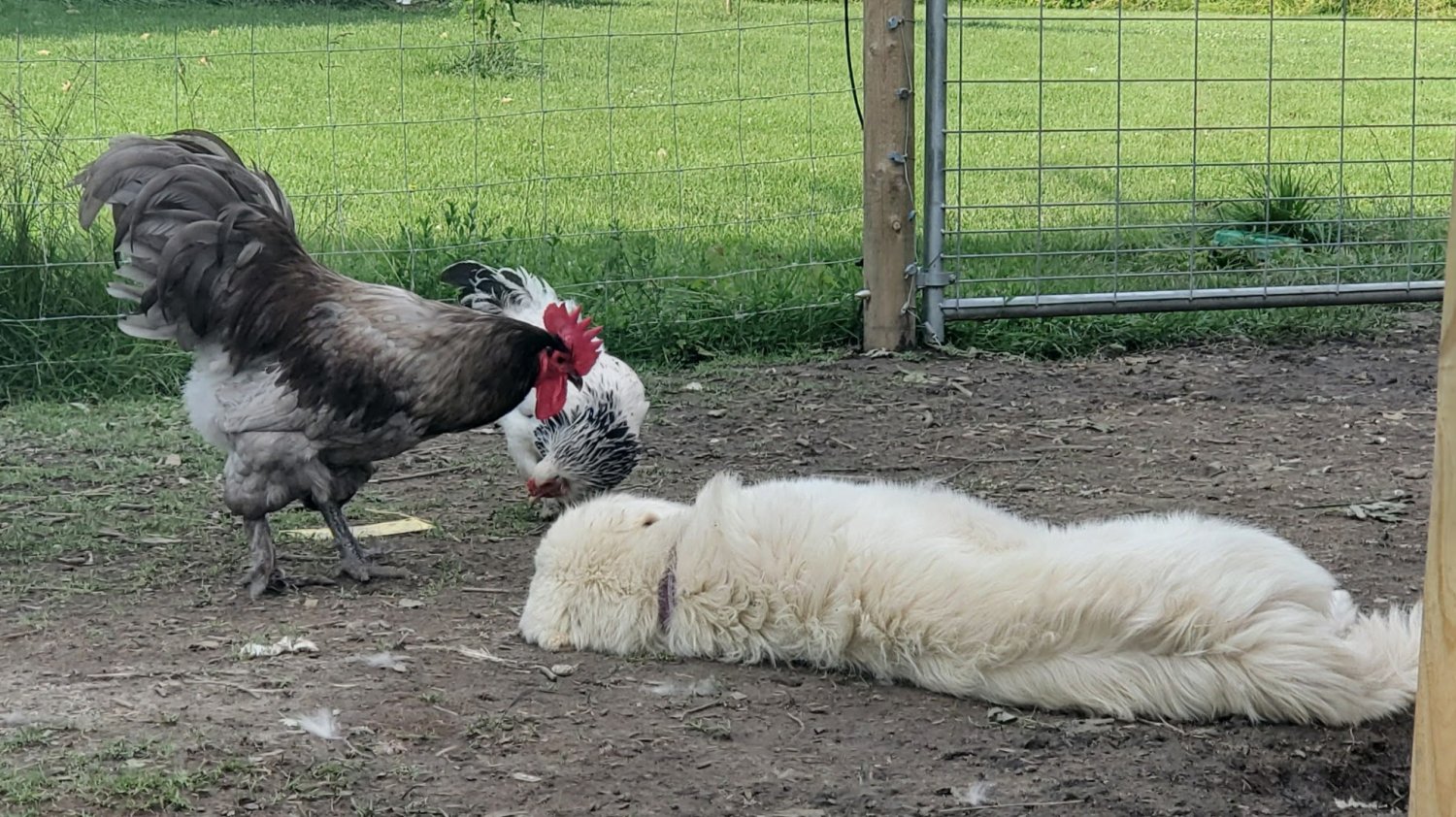 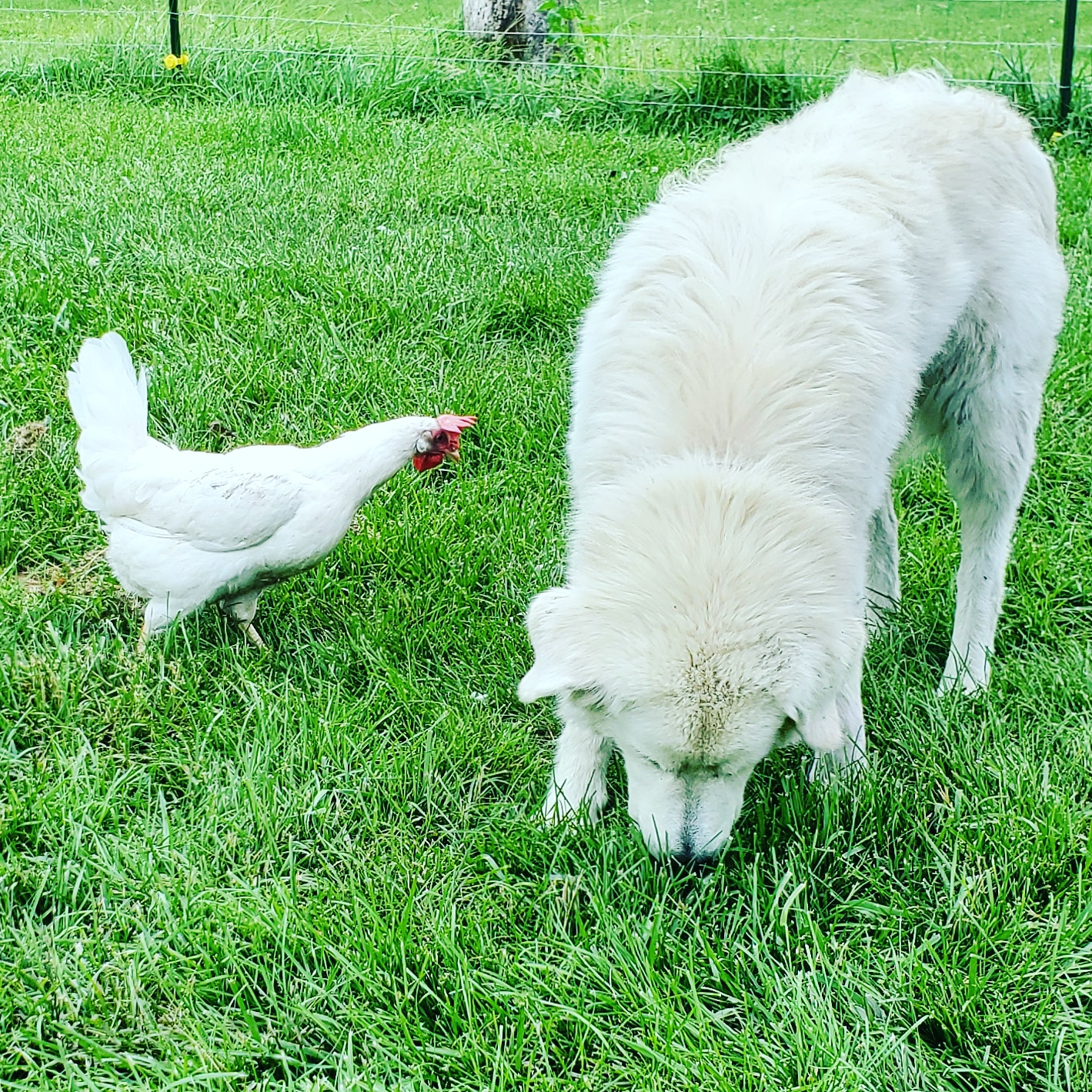 The one thing we realized was not going to happen, and we wished that it would.... Annie was never going to correct Shep when he wanted to play with the birds. A consequence of him being on her team? We appreciate that they get along so well, and do believe that Annie's example with the birds has been very helpful to Shep. The time he chose to play with a flyover bird, she came to bark at the windows of the house, but she doesn't step in.

All in all, we feel like we should be ultra grateful for her help to us and her gentle companionship to Shep.
Last edited: Dec 21, 2021

I love hearing others LGD stories!

Thanks for reading! I do as well!

Mid-summer, Shep is growing up and living his best life with his new buddy Annie. We start to notice the side of his jaw is a little bit sloped to one side and where his baby teeth vacated space, there are no adult teeth on one side.

We start to see the dog vet, then another, then our farm vet took a look at him... no one had ever seen anything like it. So the search begins to sort out what is going on with our toothless tiger.

The current theory is craniomandibular osteopathy. Basically, his jaw bones seemed to swell during his development and didn't fully form or form correctly. Now we're uncertain what he will be able to do or not do. His jawline on one side is ultra thin and he's missing important teeth.

Even on the "good" side his teeth are crumbling and falling out.

The current plan is to allow him to finish developing and take xrays. We love him to bits and fortunately have puppy health insurance on him that I've never got in the past, but expected that they might get into scrapes here and there and that it might end up being useful.

Now our question is whether or not we should add a third dog. And if we do, how soon or how long should we wait?

Oh dear. That is a diagnosis nobody wants to hear. A big barking dog that eats soft food, may still make a valuable LGD. Unless his jaw itself disintegrates. Poor Shep.

I don’t envy you a hard decision you may have to make, hopefully not.

Baymule said:
Oh dear. That is a diagnosis nobody wants to hear. A big barking dog that eats soft food, may still make a valuable LGD. Unless his jaw itself disintegrates. Poor Shep.

I don’t envy you a hard decision you may have to make, hopefully not.
Click to expand...

Yes, hopefully not. Just taking it a day at a time. They told us if he really goes after something his jaw could snap. He loves chasing raccoons and anything really that shouldn't be there. We know the day could come when we have tough calls to make, but we hope the situation with this jaw takes a turn for the better.
M

Wow, it's usually the hips! I'm sure you love them both. Sure hoping things work ok for Shep. Annie seems to have worked well. Then, you have this new pup in mind. That's brave and love.
Last edited: Dec 21, 2021

Mini Horses said:
Wow, it's usually the hips! I'm sure you love them both. Sure hoping things work ok for Shep. Annie seems to have worked well. Then, you have this new pup in mind. That's brave and love.
Click to expand...

Thank you We'll see how it goes. It is definitely the hips you hear about. Ofa testing, etc wouldn't have helped us on this one.

If anyone has pointers for choosing #3, I'd be happy to hear them. Our criteria for now is that he be male as Annie likes to be the only lady in town.

I had a female Great Pyrenees that also wanted to be the only lady, had to keep her and Sheba separated. Paris went to that green pasture in the sky in October. Sheba is now the reigning Queen. But I have 3 males, Sentry (Anatolian) hates the other two. Sigh….. dog drama!