Mini Horses said:
I love his looks! He's looking for a good home, he found it !! Handling and training, he'll do you proud.

We're so glad to have him! I'm going to run dna on him in hopes of finding his breeder. I posted him in the working Anatolians group and they all think he's purebred AS. A couple of people think Turkish Boz. A local AS breeder was asked if it might be any of hers and she's accounted for all of her recent pups so he may be a farm pup from an oopsie litter. I suppose we'll likely never know for sure, but I do hope to find where he came from and who his parents might be on the off chance they're in the database.

After the first walk past the dogs and into the barn, he found Moose's crate that was still sitting there and ducked into it. I think he must have had crate experience wherever he was before. He wouldn't come out or eat a bite the first full day. I added a beef knuckle and an egg to his bowl and it all vanished. He is quickly relaxing though. If I bring one of the other dogs into the barn, they coax him out and then they go off on an adventure. They're still a little unsure about him when he gets playful, but nothing more than a grumble here and there. When any of them grumbles, we end social time to give them all a break. I don't want to go too fast, but I do want to integrate him while he's got puppy brain.

Don't be surprised if, as he gets older, that he might get aggressive with male dogs. I have 3 male dogs. The black Great Dane/Labrador cross and the Great Pyrenees get along just fine. All 3 used to play together and were buddies. Guess who doesn't get along now? Sentry, the Anatolian. Sentry is half Anatolian, 1/4 GP and 1/4 Akbash. Fierce, and the smallest of the bunch. Sentry loves Sheba, Anatolian, and they are an awesome working team.

That's my experience, just thought I'd give you a word of caution. Not saying that he will, but if you see it, recognize it for what it is.
He is a beautiful pup.

Baymule said:
Don't be surprised if, as he gets older, that he might get aggressive with male dogs. I have 3 male dogs. The black Great Dane/Labrador cross and the Great Pyrenees get along just fine. All 3 used to play together and were buddies. Guess who doesn't get along now? Sentry, the Anatolian. Sentry is half Anatolian, 1/4 GP and 1/4 Akbash. Fierce, and the smallest of the bunch. Sentry loves Sheba, Anatolian, and they are an awesome working team.

That's my experience, just thought I'd give you a word of caution. Not saying that he will, but if you see it, recognize it for what it is.
He is a beautiful pup.
Click to expand...

Thanks for the heads-up! I won't be surprised, but do hope we can keep them running together as a pack. If anyone gets pulled, it'll be Shep, but hopefully they'll all learn to work together.

Current challenge... Annie's resource guardian is rearing its head. Shep got a bunny which she slyly took from him and then decided to guard it before eating it. Puppy got snarled at before we realized what she had and didn't back away or snarl back, just stood. When the situation was diffused he wanted to return to his crate in the barn for a bit.

That was this morning and we removed any "treats" we could find and let Rocky back out (always together under supervision). They were full on playing hide/seek around a few obstacles for the first time. Running, chasing, play biting... I was relieved that no grudges were being held. The good life of being a puppy, I guess. A pass is given for so many things that they'd never allow out of an adult dog.

Did I mention he already outweighs Annie at about 80 lbs? He's going to be a big boy!

It’s fun to watch them play together. Your puppy is learning how to be a dog. He needs this interaction with the other 2 dogs. He is one lucky puppy to belong to y’all.

Baymule said:
It’s fun to watch them play together. Your puppy is learning how to be a dog. He needs this interaction with the other 2 dogs. He is one lucky puppy to belong to y’all.
Click to expand...

Awe, thanks! I hope we can be the pack he needs.

So far no interest in the chickens. He seems totally unfazed by their flapping and running. We'll see when he unwinds a bit more, how he feels about them.

I've been feeling like Rocky's been doing so great. And he really has! Topping up water and food this morning I turned around to find he'd hopped into one of the portable electric fences and was lying in the grass near some chickens. 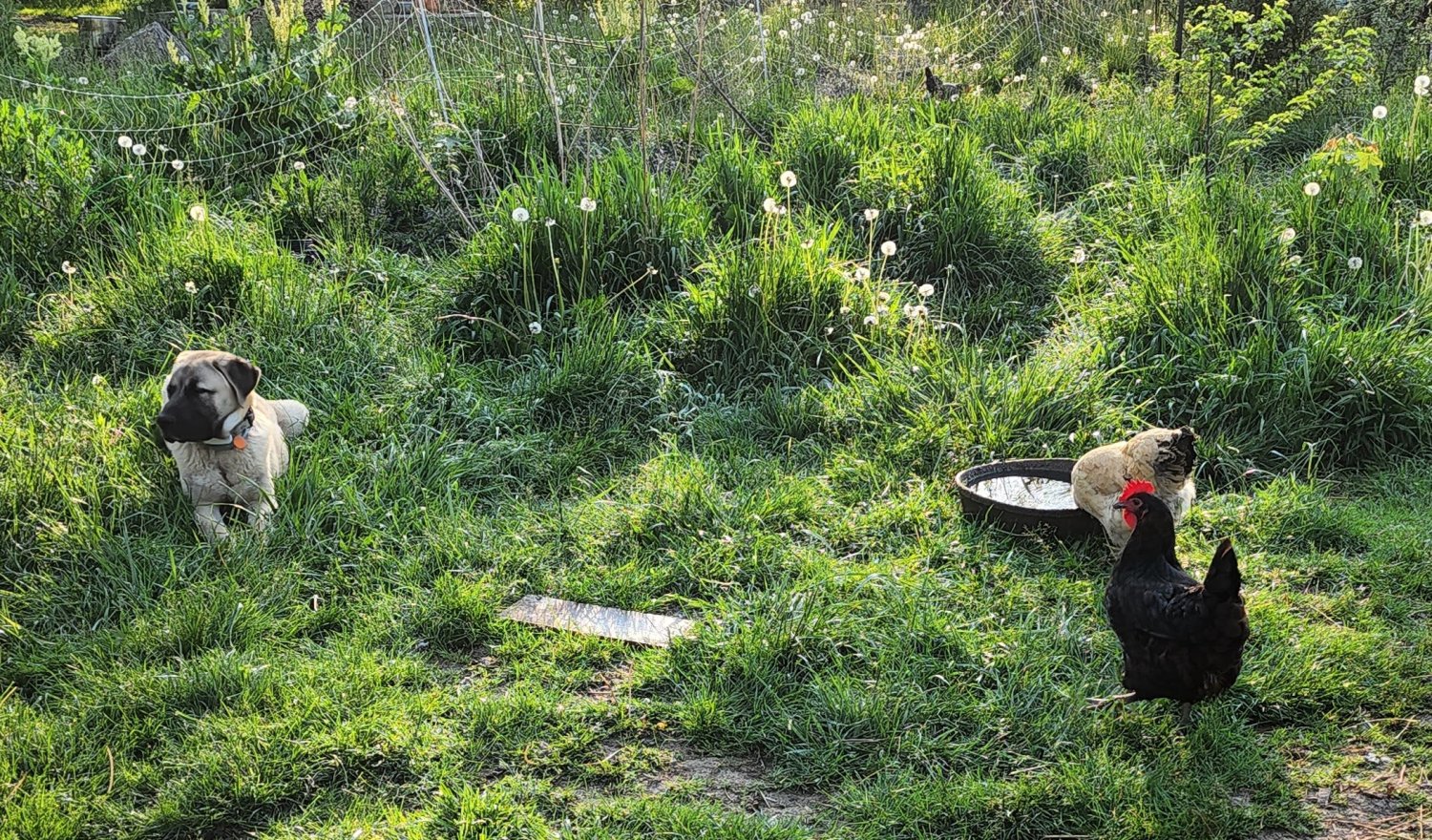 What I failed to realize was how much of his progress was thanks to my dogs... Annie in particular. (Shep is a little jealous of having another male around, so we'll see how that goes.)

This morning we were late for work and trying to corral everyone to their appropriate places after morning "free run time". We don't leave them together unattended, but they have a few hours a day when they are free to run together. I put Annie and Shep up first and Rocky froze. He didn't want to go to the barn which has been his safe place of choice or the small yard where he likes to hang out when we are all there. I put a leash on him and he turned to stone. Wasn't going to budge.

This was now right about the time I should be getting to work and live about 20 minutes away, so not really going for perfection at this point, more for any safe place that I could trust to leave him in. Raw beef bone didn't cut it either at this point as he had shut down and was making it a big deal in his own mind to move in any direction.

The answer turned out to be pretty simple. Bring Annie back out. It took him one second to move once he saw her and he bounded into the small yard (that he'd been terrified to approach a few seconds prior). Annie then didn't want to return to her post when she discovered the many goodies that were in Rocky's space, but we made it and I finally could leave for work.

I want to map out a space where he can stay near Annie, but without access to the birds until we know him better. Haven't figured out what that looks like yet, but she is comforting for him, toothy corrections and all. Maybe he sees her as a mother figure? lol

I’m loving reading Rocky’s story. He is an awesome dog!

Thanks for reading this far!

Love your dogs, keep the pictures and stories coming!

Rocky is feeling new confidence. I love it and I am also keeping an eye on him and Annie. They've gone head to head a few times. They both have a tendency to resource guard when the other is around. We don't leave food out since Rocky came to us, but someone caught a mouse and they both felt they deserved and owned it. The good news is, they move from that to playing with no hard feelings. Shep just rolls over and is happy letting them be large and in charge.

As his confidence grows, he no longer wants to sleep in the barn either. He wants to be out barking at the coyotes. I haven't been sure how I felt about letting him free at night just yet, but he howls and carries on in the barn and is only quiet if I'm out there with him. I slept in a lawn chair near him a couple nights so everyone else could sleep, but finally let him out and he's been pretty good. He has slipped up near the house a couple nights to sleep under the bedroom window. So far mostly good.

Still no chicken chasing either. Hoping he and Shep and Annie stay friends.

Did I mention that our local DNR brought in and released bobcats to help control the deer population? Not sure why they didn't just increase the bag limit during hunting season. A lady who raises sheep down the road found a mom and cubs in her barn one morning a couple weeks ago. Really hoping these three can work well together.
You must log in or register to reply here.
Share:
Reddit Pinterest Tumblr WhatsApp Email Share Link