Our Steer is Here!

Our steer was delivered today. He was born last October, 2019. He has a slaughter date in March 2021. He is half Charolais and half Hereford. We named him Goldie. 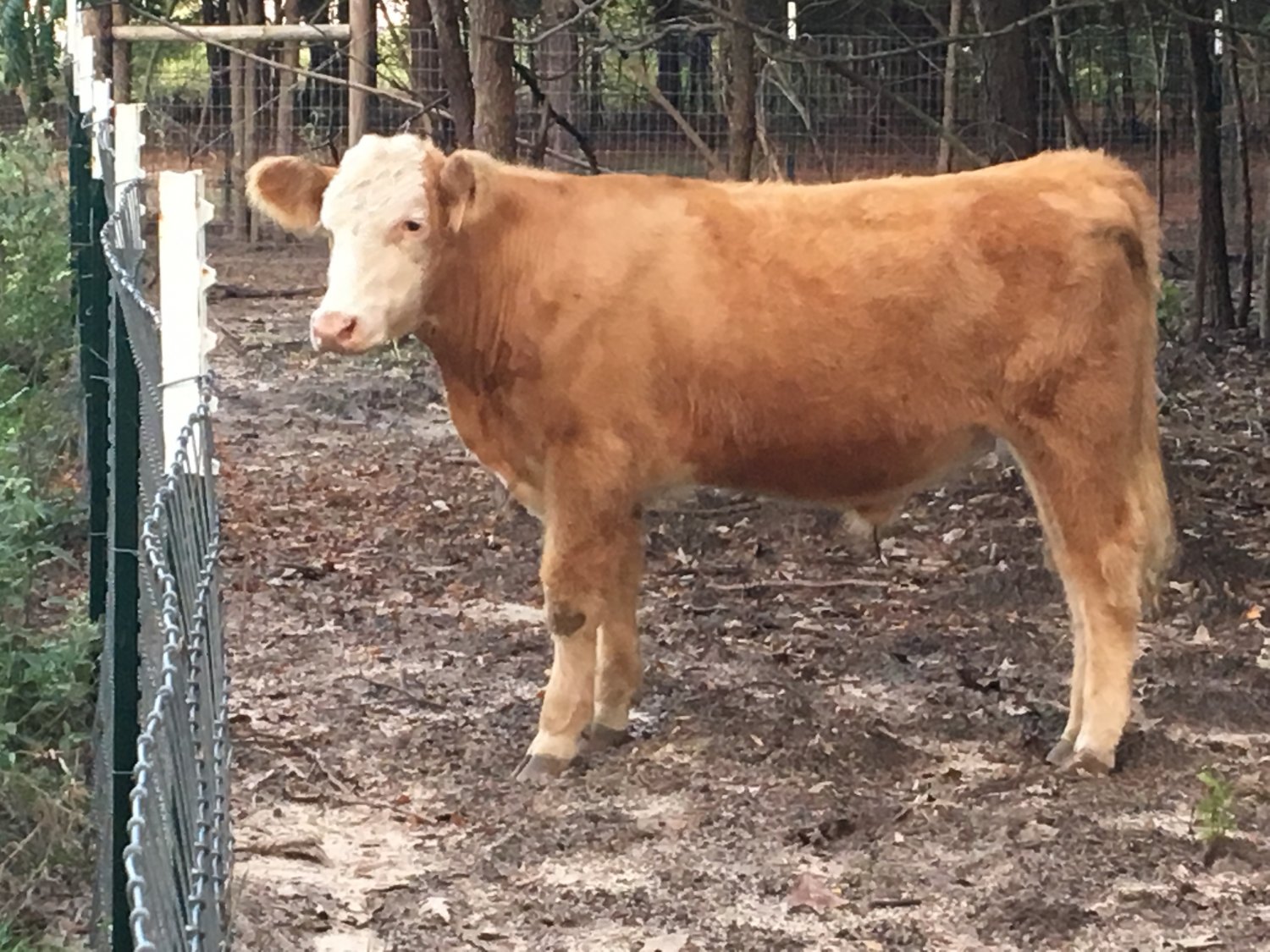 @farmerjan what do you think of him? I'm kinda excited to have him. Been a long time since I had cattle. Won't keep him long, but I'm happy to have him.
F

Nice looking animal. Looks like he stands pretty square on his legs, straight back, alert but not "looking for a way out" face. If he were my heifer, he would be on the short list to keep as a replacement.
The her/char cross will give you decent growth from the char, with a little more fleshing out from the hereford. If he is about 10 months, then you will be butchering at about 16-17 months... hopefully he will "finish enough" to get some good marbling in the steaks. That is going to be a little young for the full marbling... especially since the char is a growthier breed and would finish better at about 22-26 months. He will be tender when you do take him. Since he is going to be what we call "dry lotted" since there isn't much grass... make sure you grain him well so his growth does not stagnate.... you want him gaining 2-3 lbs a day for the best weight conversion and to put the most taste into the meat. It isn't going to be cheap meat, but it will be meat that you know where it came from. And if I remember rightly, you are making out like a bandit with the exchange of lamb???? That steer here is worth 1.45 or more live weight.... so I am guessing he is in the 6-700 lb range now.... so you are looking at an animal that is worth between 800 and 900 .... the hereford crosses are not discounted as much down in the south as they are up here.... because they make a good cross for y'all with the chars and the brahma - "eared" cattle...
I think you did pretty good. Too bad you aren't set up to keep him another 4-6 months for more weight and a better finish to the carcass.... But then again, you might like the milder tasting, and less marbling/fat of the younger animal. Herefords do marble up well, so you might just have the best situation. Looking forward to how well he grows.
Did the farmer give you a weight? or an idea of what he thinks he weighs? It is hard to tell from here.... and char crosses tend to fool you weight wise. I always think they weigh more than they do when they are younger as they have more frame.... then they start to fill out and they hit the scales heavier than I think as they carry their weight well.

Thanks @farmerjan, I value your opinion. Russell has been feeding him about 7 pounds a day and free choice hay. I didn't ask him what he thought the steer might weigh. If he was a heifer, he would have joined the herd, for sure. He is very calm, not high headed and stupid crazy. Russell weaned him and has kept him lotted since. He is also feeding out a steer for his own freezer. He proposed swapping chicken for him keeping the steer fed and I jumped on that deal like a duck on a June bug. He originally was going to wean the steer and turn him back out on grass until we were ready for him. So I am feeding 10 Cornish Cross chickens on buttermilk fermented feed for Russell. I'd say that was a darn good swap.

Haha, as the garden is winding down, Ringo is with the ewes taking care of business, the pigs are gone, the 45 Cornish will be slaughtered in October and I am looking forward to less of a schedule, here comes the steer. At least he won't be needy, just plenty of hay, feed and clean water. We are looking at running a temporary fence across the pipeline, then we can open the gate to his pen and open the back gate to pasture #2. The sheep have grazed down the bermuda, but there is still plenty left. The fescue and clovers will make a nice pasture in February/March, so he would get a little grazing. Eh. We'll see how it goes.
M

I like Goldie. But -- too cute a name. He's more masculine than that.

Passed a field of heavy bred Fall calving cows yesterday. They were a combo of Char & Angus. A nice looking herd! One cow looked like she was carrying a litter

Of course, made me want one -- but, not going there! You know -- first a beef, then a heifer, then AI for another calf, then another before that one is old enough to butcher, then -- oh, why not a milker....I can get carried away!!! Nope. Will buy my beef and milk my goats.

Getting Goldie to eat feed has been rather interesting. I put pellets in the trough and he wouldn't eat them. Oh, he knew the sound of feed being poured out and he was interested, but nope, not eating that. When I run into a stump with an animal, I try to look at things from their view. Ok, so Goldie doesn't like the trough? It must be because he is not going to eat from anything that smells like pigs. So I got a rubber tub and put feed in it, same thing. Nope. Not having it, it was used by chickens. Cleaning it did no good, he wasn't having it. Ok Goldie you win. I got my cordless Hitachi circle saw and cut the top off a blue plastic barrel, making a tub about 18" deep. I scrubbed it, Cloroxed it and left it soaking in Clorox water for a couple of hours. Then I rinsed it over and over, left it in the sunshine for several hours to air out good. I carried it to his pen, poured feed in it and was rewarded by him coming up to the fence and digging in. Bingo! Goldie moos when he hears my voice. He is friendly, but stand offish, which is good. Don't want a crazy steer or one that wants to be a pet and knock me down.
F

All according to what they are used to. And you are right, smells do put some animals off... some don't seem to care. But he knows what he is supposed to be eating out of ...... get with the program new owner !!!!!

Glad you got it figured out.

That's funny! You got yourself an OCD fastidious steer.