I only have the children’s pedilyte on hand, has anyone know this to work/be effective? If not any other ideas? Vet can’t see her for another couple days!

Find another vet, now. Any vet knows that scours in a kid only a few days old is serious. The pedilyte will help keep her from dehydrating. I haven't had this problem, so I am not much help. Like you, I would be rushing my baby to the vet.
@Sheepshape
@babsbag
@Goat Whisperer

Sounds like the abrupt change from momma's milk to replacer is what is causing the scours.

How much are you giving? How is she acting? What replacer? I really hate replacers. My goats have never thrived on it, but you did what you had to do. In the future I'd just put them on whole cows milk.

I would give a little jump start plus gel if you have any.

I have never used pedilyte but I know others have.

I agree that it is probably the replacer. I would honestly start adding cow milk from the grocery store to the replacer and get her switched over completely but do it gradually. Tractor Supply might have powdered goat electrolytes, mine carries it. But if they don't the pedialyte will work if you can get her to drink it, just be careful she doesn't inhale it. But she is drinking her bottle so she is getting fluids which is good.

If you think that she has something else going on the main cause of scours at this age is eColi. Spectoguard (Scour Halt) for pigs is the drug of choice. It should also be available to Tractor Supply.

Thank you so much for all the info guys!! She went down hill very quickly this am I thought I almost lost her!! My vet was away on a farm call already but I put her in the car and drove to another vet clinic that was able to see her Yay!!!!

They gave her iv right away and an injection of stronger electrolytes because she was so on the brink. By the time I got to the vet (1hr drive) she couldn’t even lift her head.. They sent me home with powdered electrolytes to give her instead of milk replacer for the day as well as a medication and antibiotic for scours for what ever else might be lurking in her gut.

She never had moms milk, the mom passed its a kid from someone else’s farm they called me and asked if I can take her because it was more then they could handle at the moment and was going to let her go

That’s so interesting about the cows milk! This is my first time with a bottle baby.. kids here have always been with mom! And I don’t have a pregnant or nursing doe to pop her in with at the moment!
I just assumed thats what I needed and ran out and grabbed it! I wish I had known cows milk was better from the get go! Saved money and maybe not have been so harsh on her poor tummy!
I did start with very very small amounts more frequently so she didn’t guzzle and get an upset tummy but it happened anyway.

Since all her fuss at the vet she’s bounced back and it up on her feet and walking around seems very perky compared to near death this am!!! I’m watching her like a hawk poor baby but she’s 100x better!!!!

I attached a picture of her.. because she’s too cute not to share! Ignore the crate and puppy pads... I was trying to control the poop clean up!

Vet said to start milk replacer again tomorrow. I’m really nervous she’s going to go down hill again once starting it back up. Even with the meds and supplementing with electrolytes 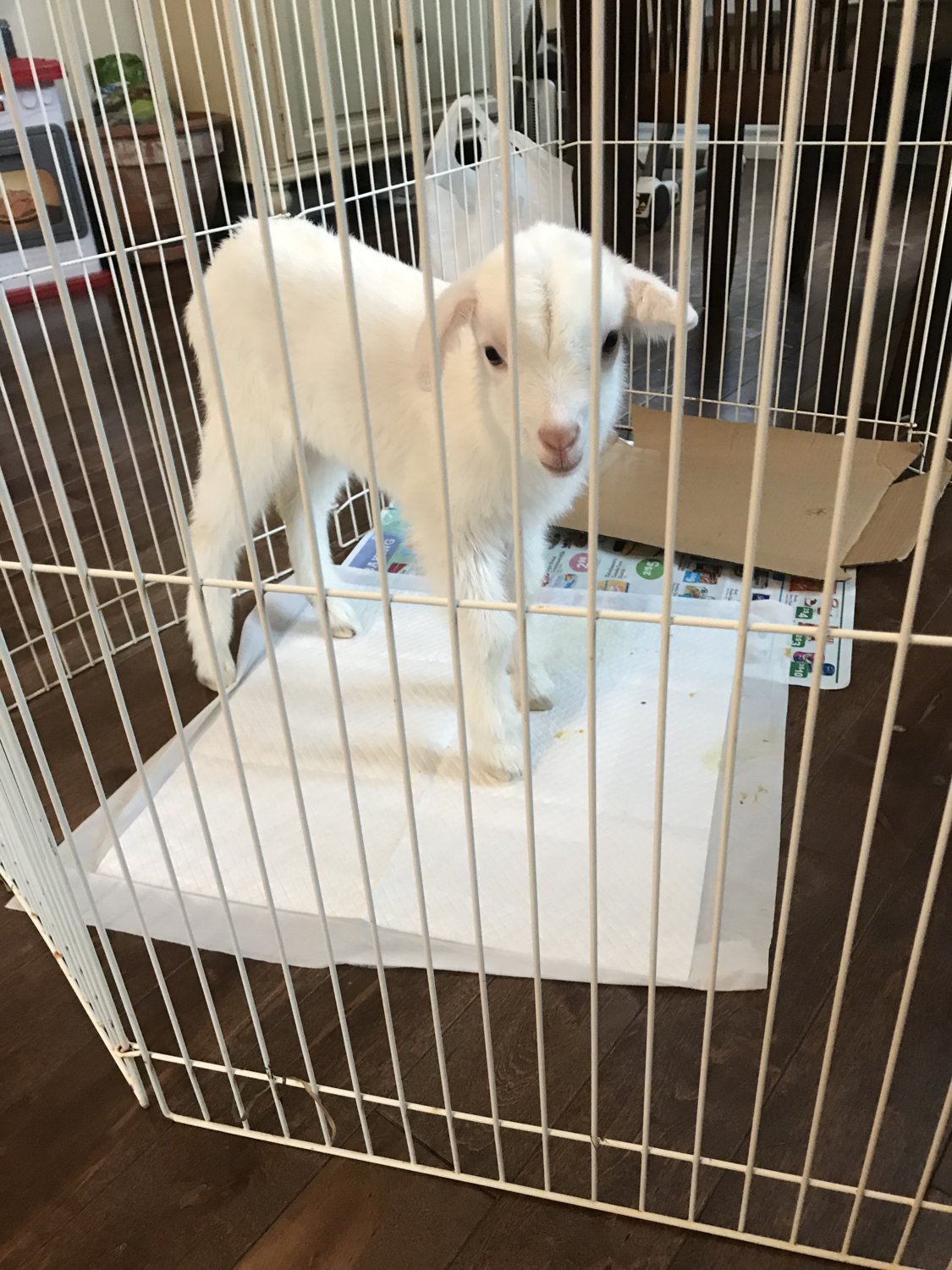 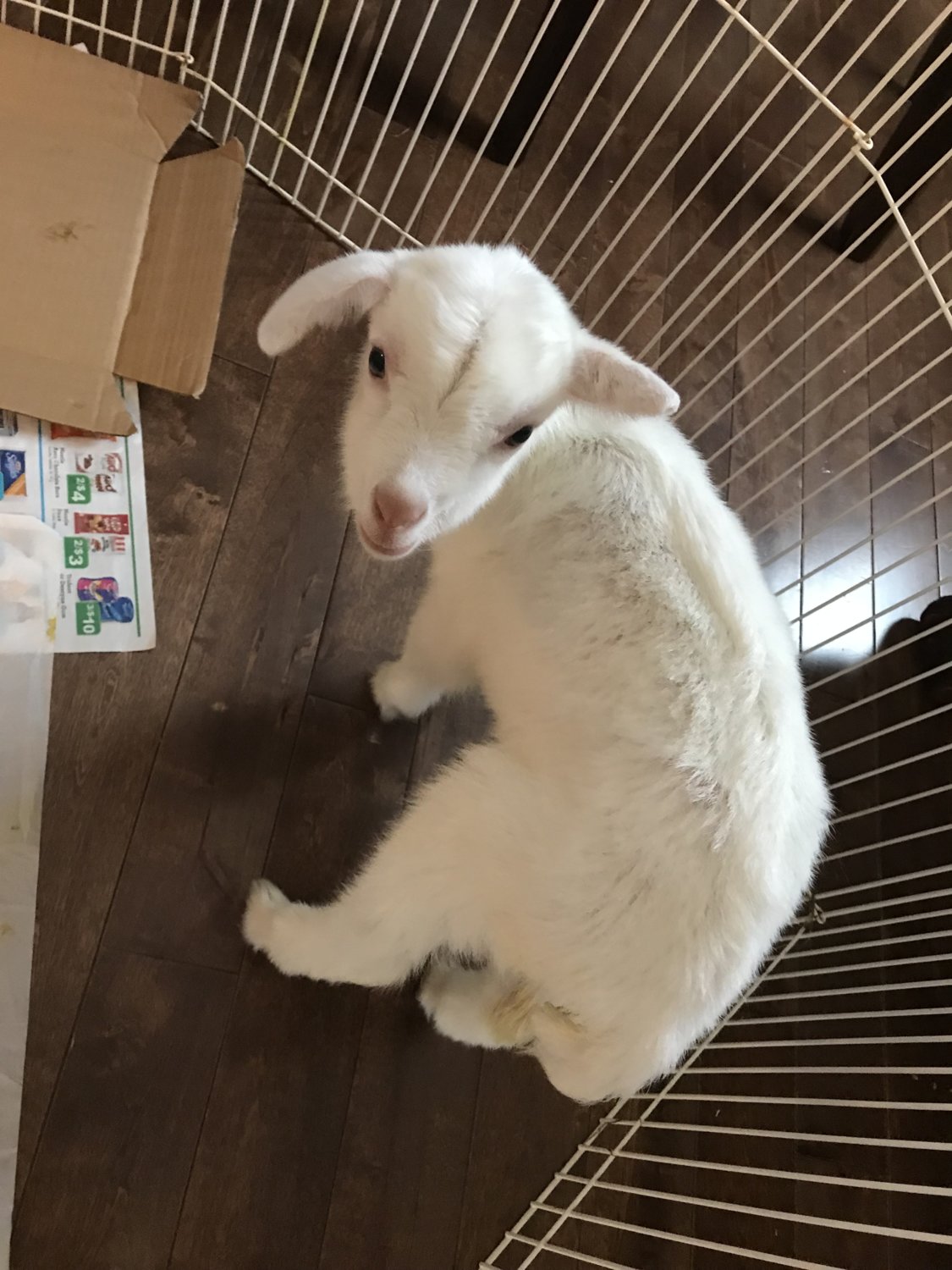 She is sooo cute. And I am very happy to hear that she is doing well. I would just keep the vet on speed dial for a few days, but hoping that you don't need it.

babsbag said:
She is sooo cute. And I am very happy to hear that she is doing well. I would just keep the vet on speed dial for a few days, but hoping that you don't need it.
Click to expand...

Yes! I took all their info and my regular vet will be back Saturday! But fingers crossed I don’t need it!! I think they covered basically everything and she’s so
Much better I hope it continues I’m really worried about starting up the replacer again tomorrow.. Augh! This little babe is just pulling on my heart strings!

Any chance you can find someone with some goat milk locally? If you could at least do that for a week even if you had to transition to cows milk it could really help her.

If you don't know if they test for diseases.you can heat to 165' to pasteurize.

Where are you located?

So she went down again this am after 1 feeding of replacer after she finished her electrolytes from the vet... so just ditched the replacer and picked up whole cows milk instead/ she’s really keen on it and really wants to chug it but I’m only giving small frequent meals. Fingers crossed she clears up.... yet again with getting rid of the replacer!!

This may be a stupid question or a 2 late question but in your opinion how much do you recommend per feeding? Vet said roughly 300ml every 4hrs (at 4 days old now) but I’m wondering if she’s getting a bit to much?

Curious your thoughts! Since you guys have me good advice on the cows milk!