I made the plunge and finally purchased 2 feeder pigs. No clue what type. I'm sure he told me but I'm sure I didn't care since I'm almost positive I can make them taste good.

I do have a question I wasn't expecting though. I have a trough that I poured their food in. I just went ahead and poured and 50lbs of it in at once. They are around 75lbs and i read to let them free feed until a magic number which I don't know. So I guess that can be another question but my main one is that they are sleeping in their food. Is that normal. I mean I like sleeping too and I like eating but....... Well.... Actually that sounds REALLY NICE! 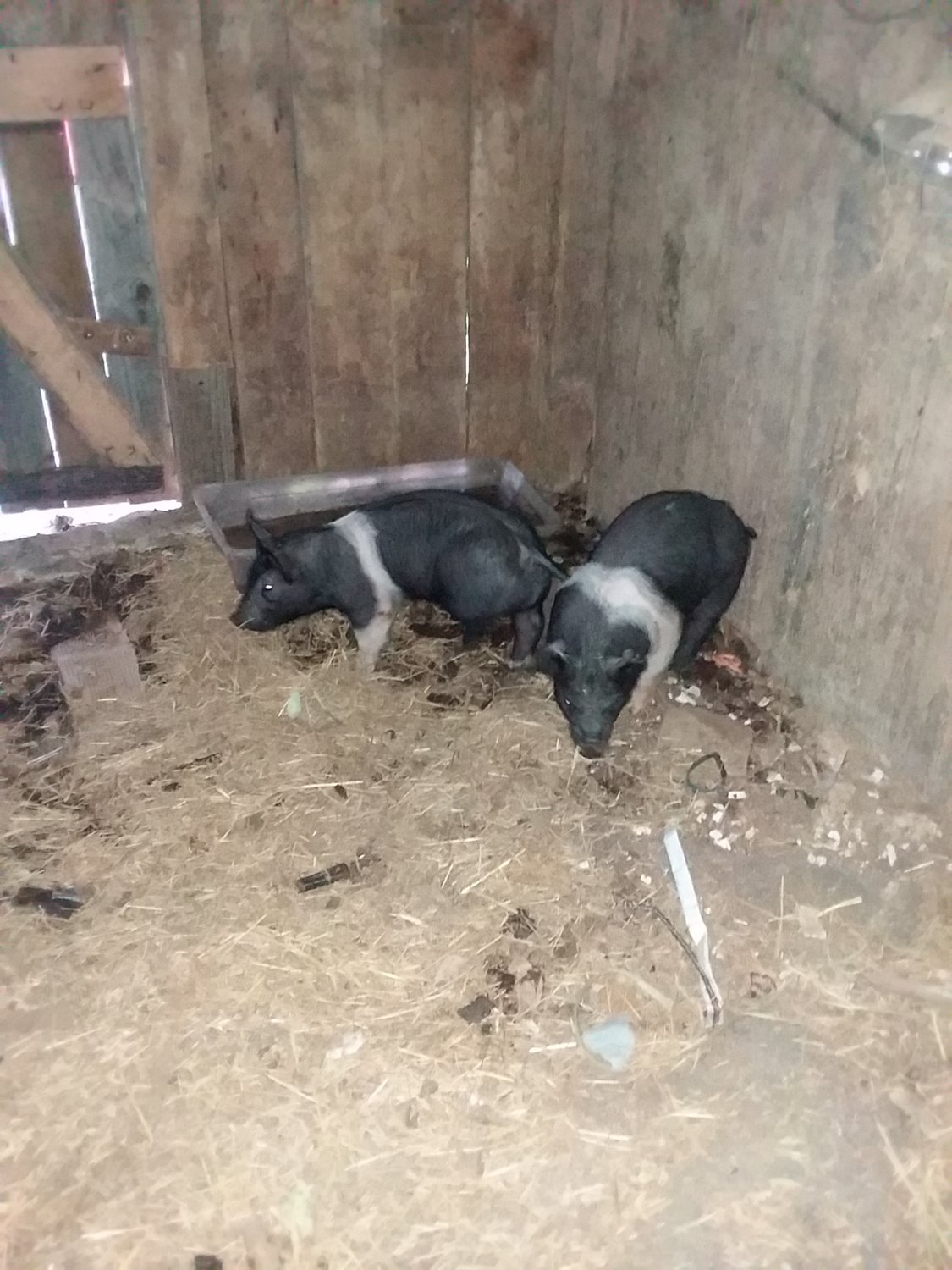 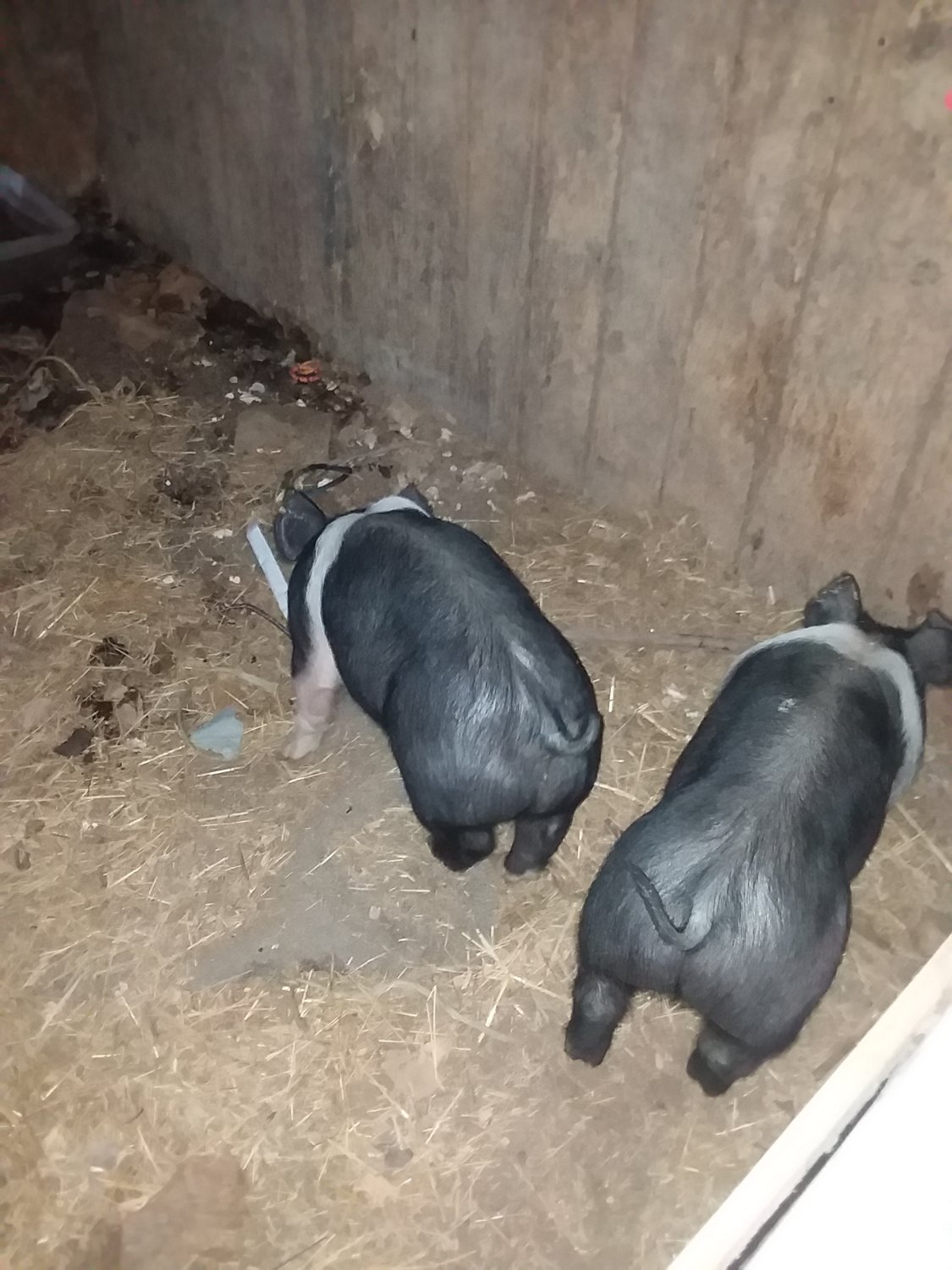 Pigs are remarkably tidy animals. They will use one corner for their bathroom. Their feed trough is big enough for them to get in and makes them feel like they are snuggled in. We use rubber feed pans so this isn’t a problem here. (Others use the gravity feeders where the pigs have to pick up the flap.) If you’d rather they didn’t sleep in their trough, spread a bale of straw in another corner or just take the strings off the bale and let them spread it. They love to do that and make their own bed!

As far as feeding goes, it’ll take those pigs several days to eat a whole bag of feed. By dumping the whole bag in an open trough, you are opening yourself up to several issues: waste (they’ll root through it and knock a lot on the ground and won’t usually eat it), wild birds will find their feed and it’ll turn into a feeding frenzy (you’ll then end up with bird poop everywhere and in their feed causing more waste), and it’ll get stale and not taste as good.

We’ve found that ours grow better given a set amount twice a day. They waste less too. For example: we have three 200# pigs right now that we are finishing. They get 3/4 of a five gallon bucket twice a day. If they don’t clean it up, we skip a feeding. If it’s cold and cleaned up before we are done with other chores, we give a bit more. It’ll take a little trial and error to figure out how much feed is just right and then increase as they grow. Note: some swear by full feed, I’ll just say that we’ve only found that effective when dealing with a young litter.

As mentioned, we do the rubber pans. One of the biggest issues is that you have to get in with your pigs every time you feed to dump the feed. Ours are accustomed to us enough that this isn’t a problem. Some aren’t comfortable getting in with big pigs frequently. We typically have pigs that enjoy scratches and will even lay down and roll over for belly rubs. The pans are also great for giving treats in! This keeps them from having to eat off the dirt. Ours get all kitchen scraps except pork. They also get any eggs that get cracked before use. In fact, they know that DH is the one that feeds them more and I give them treats more and they get excited to see me! When I’ve had milk that needed dumped, it was super nice to just dump in their pans and let them slurp it up! We do one pan per pig to minimize the scuffling.

I looked at your pics again. I don’t know how reinforced the walls of their pen are but as those pigs grow, they have the potential to be very destructive. I’ve seen them destroy a horse stall, walls and all. If it was me, I’d line the walls of their pen with pig panels to keep them from rooting directly against your boards. Just another thought.

Btw you’ll have yummy pork before you know it!
F

The breed is Hampshire. They look to have some of the "double butt" breeding in them since their rumps are so wide. Nice looking pigs. I raised Hamps and Durocs and Berkshires.
They will sleep in a corner that is DEEPLY bedded with straw, old hay, etc. The trough maybe their preferred place because it is not on the cold floor. There should be enough bedding so that they can burrow into it to keep warm. 6-10 inches deep minimum as you are in colder country than here.

As stated, they will decide on one spot to do their manure and that will be their bathroom corner. Most pigs do this, occasionally they won't. You can then just clean that spot out regularly. They will do some of the pawing and then some covering up of their manure too sometimes. Like a cat but not as tidy. But some just squat and go.....

I also would not put out more feed than they can eat in a day unless it is in a self feeder that they have to lift a flap to get to. Too much temptation for birds, mice, RATS, and possums and skunks. It will get contaminated and wasted and it's not cheap. Why feed the wildlife? I used to feed twice a day except when my work schedule was complicated but they got fed once a day then. You want them to clean it up. If nothing else got into it, it will spoil and mold on wet damp rainy days if there is too much and they don't clean it up.

The "flat black rubber pans" are good for feeding in but you will have to go in with them to feed. Or use a 1/2 old water heater tank. Cut in half longways, makes a good trough. Gives room for them to eat without fighting for space. But still only what they can clean up.
You must log in or register to reply here.
Share:
Reddit Pinterest Tumblr WhatsApp Email Link