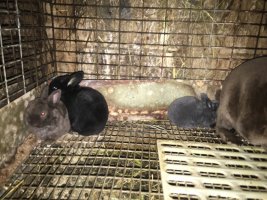 Our youngest litter, the ones we saved after the mama was late building a nest. They're doing great.
Got DD1's mini a Pink rain sheet... 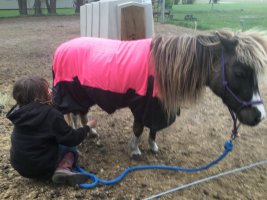 Not sure the pony likes it... but it made a little girl happy.

And working in the field, we are replanting another 4ish acres. DH is trying to get it nice and even so it's easier to bale. 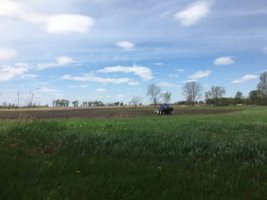 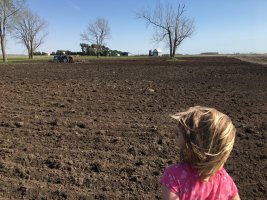 Best of luck to your DH getting the field as smooth as possible. You don't think that a little bump here and there makes a difference til you are baling hay with a wagon behind it... and the tractor dips a smidgen then the baler dips off center then the wagon wheel drops a bit....It sure does make a difference. even with the planting, I found that out when seeding the one field and hit just small ridges and dips....
Pretty land from the pictures...

All this work will absolutely be so worth it! Just the dirt looks good! As a hay field it will be beautiful.

Hey pony, suck it up and wear the pink rain sheet! A little girl loves you and loves pink!

Busy week.
Vet came out and gave their vaccines on Tuesday, both Rayne and Daisy reacted, I'm told this is common with the Rabies but it's required for 4H. Normally we don't do rabies and I do the others myself. Both are fine now, gave both a dose of banamine. Lightning got a good exam. Vet thinks he'll improve with more chiropractic care, so the chiro came out Thursday. I kind of hate how much $$ we're putting in him but at the same time it'll be 3 times the $ to replace him... but we wouldn't have to replace him until Jocelyn out grows Babe.... IDK still on the fence with him. Though he improves and have the stuff to start ground driving him. One of the trainers does have room for him in about a month... need to decide if I'm sending him by June 1. Thursday Jocelyn had a riding lesson on Richie. He did spook but she was fine and handled it. 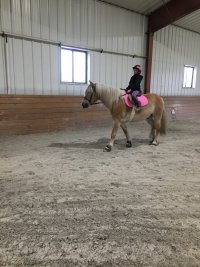 DH borrowed a packer thingy... so worked more in the fields. And yesterday he planned on planting it, 4-5 acres in new hay and 1-2 that has been weeds since we bought in new pasture, though may be cut until we fence it.
The drill did not work so we had to hoof it again .... got the hay fields done but it was dark and we were exhausted so the pasture didn't get finished. 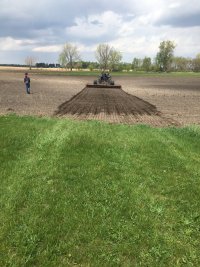 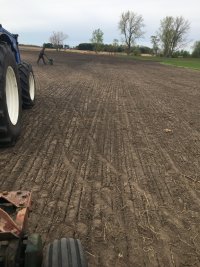 Then I brought the camper home from the farm as we have a trip planned in about 3 weeks. Need to get it unwinterized. DH has never let me pull it as it's super short (to the ground). So fun to pull a trailer I've never pulled in the dark and the rain.... I totally poked along. I don't particularly like driving at night anyways. But oh well. I survived and kept it on the road. It was a long day, friend's chores, got feed and a few groceries in the morning, Softball practice (yes I get to rest then) then out to the farm until 10 pm. DD2 has a cough so am home with her this morning. There's several things I should be doing but between the rain and it being Mother's Day.... I may just take it easy. We are hoping to go trail riding next Sunday.

Every night this week is 4H/Church or Ball.... I told the kids we totally should take the year off of kids stuff... I have no idea how I will be able to help with hay in June with all the practices we have scheduled. I guess one day one thing at a time.
F

Cultipacker? Smoothes, levels with small ridges, usually used before seeding a new field. Makes a good seedbed to plant into.

You are amazing and get more done than I ever did. Yes, one day at a time, you will make it.

Yeah a cultapacker.
So finished the planting yesterday and had a good rain last week after planting last week.
Had a busy week but finished school.
Was supposed to go riding today, even DH was supposed to go, but I woke up not feeling well. Guessing it's a flu bug...praying it's short lived. We have a ton of things to get done this week. I bought vegetable plants yesterday and hoping to plant the garden between ball games and 4H practices. Been resting and DH is getting things done, mostly outside stuff but he did feed the girls and run the dishwasher.
Here's some photos from the week. 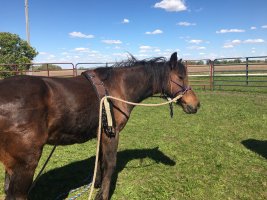 Line drove Lightning, he did great. Getting closer to riding again. 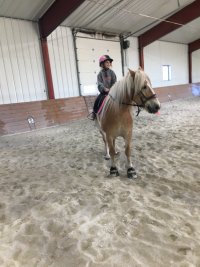 Jocelyn had a great lesson on Thursday then she and I went for a short trail ride afterwards. 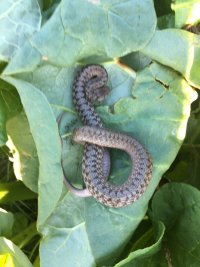 This guy found a warm bed in the rhubarb as we've been covering it. Not sure but possibly a brown snake. He was cold so I got a good look at him...he had the triangular head but no other signs he's poisonous... no poisonous ones that match this guy anyways. 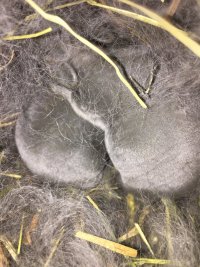 I would be very concerned about the snake because of the head designating that it is a poisonous snake. I would guess at a diamond back water snake; I know they don't have to live around water. Different times of year you may see different colors. But I am not an expert by any stretch of the imagination.
I am not scared of snakes, but do not like nor do I want to be around poisonous ones.

@farmerjan I've been watching out for him, I love snakes and that they are good control from everything from grubs to mice. Haven't seen him again, I'd be mostly concerned about the dogs or cats getting bit. So far haven't seen him or gotten a good id on him. He was small and matches the description of a brown snake that's common locally though I've never seen one. Corn snakes can have different patterns too.. IDK
This was my thought https://www.inherpatlas.org/species...s home to,by a total of 28 species in Indiana
You must log in or register to reply here.
Share:
Reddit Pinterest Tumblr WhatsApp Email Share Link