@farmerjan & @Baymule
this is my sugar cream pie recipe, double the vanilla if you like. 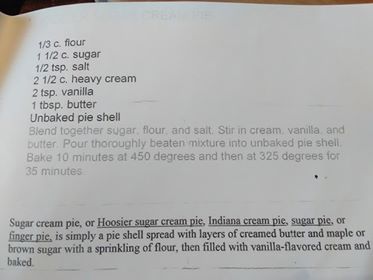 If you google it there are a ton of different recipes. This is a friend's Grandpa's recipe and I found it's the way I prefer it. Not sure a heart doctor would appreciate it...

To my understanding it was German and possibly Amish as the folks pushed West through these parts. The crust is made and I think left raw, then the cream ingredients are poured in and traditionally stirred by a finger so as not to puncture the dough. Like pumpkin pie, no top crust. I haven't had homemade in quite a while since it was made by the matriarchs that are no longer with us. I buy mine in the freezer section already to thaw and eat! I would have to Google it or find an old cookbook with it in there.


Just an interesting side note: (at least to me)
My German ancestry came as one huge family across when an Amish movement was occurring here into the Colonial US in 1600's. My folks were Lutheran, but at that time they all lived "primitively". My people moved West just as the Amish and other pioneers moved West and settled in various states ending up in Indiana. We just maintained our religious beliefs in a more modernly advancing lifestyle. The spelling of the surname changed various times, but I have only found one family that ever immigrated to the US, and then spread out like wildfire.

@Pastor Dave my father's family also came over in the 1600's. At some point the family was in Kentucky then moved North near Indianapolis. And have been in Indiana for several generations. My Dad's parent's "lost" their farm when 465 was put in around Indy. They bought a lake cottage in Koscuisko county with some of the proceeds. My Grandparents moved there permanently preceding my grandfather's death in 1975. Which is how my Dad ended moving north and meeting my Mom. My maiden name is Dearnger also German and many spellings.


On the farm front, we're getting some quotes for the horse barn Mom wants built. And the septic will be started next Tuesday/Wednesday.

My family went through PA and then TN before moving into IN when it opened up to settlement. The other families that married into each other in TN moved here too and those names are linked. Boone County is where my family settled, but brothers and cousins settled other IN counties and now have lost the history. The name began as 'Nehs', but has changed spelling so many times that most of the newer spellings would trace back to that original family with 10 sons and 2 daughters all sailing across from Germany. Some Nehs still live in Eastern US.
F

Is your mom getting the horse barn built on her property? With the outbuildings, barns you have there it would seem to be a better use to just "remodel" a bit to make horse stalls for anything you have. After all you have gone through with her situation, I wouldn't think having anything financially tied to her is a good idea.

Thank you for the recipe. I am going to have to try it.

You read my mind Jan.


promiseacres said:
this is my sugar cream pie recipe, double the vanilla if you like.
Click to expand...

So basically it is a whipped cream pie?

I'm going to try that pie. I like pie a lot better than cake.

It is a firm cream when it bakes. Good warm, room temperature, or cold. I like all pies, but it's my favorite!

Pastor Dave said:
It is a firm cream when it bakes. Good warm, room temperature, or cold. I like all pies, but it's my favorite!
Click to expand...

I prefer cold, though at a carry in recently they warmed it before serving.... I just let it cool. Praying we get our rain put up and the coming rain falls apart like they say on the news...

How many acres did y’all cut? Get it on the trailer and in the barn, you can unload later.
You must log in or register to reply here.
Share:
Reddit Pinterest Tumblr WhatsApp Email Link