Yep, you never know when a skill learned early will be useful in the future.

Got our hay analysis back. According to my research it's " fair to good" but still feeding a lot more to each horse than I anticipated. So upping their grain. Animal Nutrition class was a long time ago... Not bad for old cow pastures.

You did pretty good with your old cow pastures. It can only get better from here and you have a good head start!

Before the snow melted yesterday afternoon I took the kids out for a "photo" shoot for our Christmas card. We had fun with it and the horses did great., helps we let them eat a bit of snowy grass.

Today DH is home with the flu and I'm feeling a bit off also. So taking it easy this weekend... Working on house work. All the kids seem fine though Kinzey's been fighting congestion all week. Hopefully they stay that way. It's bad DH's boss only let him off since he actually vomited... he worked all day yesterday being nausas I cancelled all our obligations at church, I was supposed to teach preschoolers and make goodies for our snacks... but fortunately others can help out. 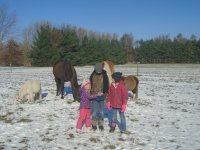 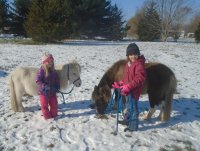 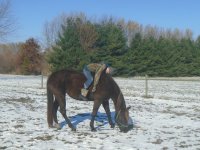 Great pictures. I wonder if Boss Man will rethink his attitude toward illness at work when he's the one praying to the porcelain god.

Not much going on. DH made it to work all week. I never truly got sick though felt off several days.

Been debating on our rabbit situation. Want to keep up with some 4H bunnies but really want to cut numbers overall. We only got 2 litters from the Velveteen lops, and I culled the majority of them. They didn't pass this year again, but get to try again next year. So at the very least 3 more years until they are approved. My son absolutely loves them and wants to show them 4H... but our county won't allow them.. In any case I need to just cut some numbers but struggling with who to cut/sell. I need enough from the various lines but the one doe I kept from my expensive buck I had to cull due to his teeth/snuffle issue is not great though was the best of the lot. Which is so frustrating... Then there's a show next weekend.. with a specialty for the Velveteens... but...not super into going. But why keep breeding if we aren't going to make a few shows, especially with the kid's rabbits. Show experience for the bunnies does help sell them... we have both a very nice MR and a Polish doe from litters this year, both ARE really nice.... but haven't been able to show or sell. But the bunnies are doing great, we have a couple of litters of Polish which have survived and are doing well.

On the farm front Mom still hasn't gotten anything out of the farmhouse, though on our part we haven't had time to start much demolition.... and frankly having her horses here sucks. Despite having what should be plent of hay I am still worried that we have 1 too many horses to make it until hay season next year as we are also having to feed more per head than in the past. That's with upping their grain to 3 times the "normal" amount. A combination of too many horses, aging horses and hay that just doesn't have the nutrients they need. So her unbroken 19 year old Morab that she has done nothing with is just a constant reminder that she's eating hay the others could use besides the fact that having to keep Mom's horses are a constant reminder to me of all her broken promises....

I really am trying to stay positive and patient. I told DH I'm ready to take out some walls!!! LOL I think it might be fun and make me feel as if things were moving a bit forward.

Bashing things can be very therapeutic

Exactly what I was thinking...….scary how often we are in synch with each other! LOL

Knocking out walls to some good loud rock and roll could really be fun!

Fortunately so can rolling out pie dough, so far we aren't quite ready to knock out those walls. But DH got the roof patched back up. 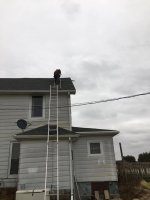 We moved the hay out of the big pole barn and into the corn crib so DH could move all the hay equipment inside. He said about 20 times how much better he feels about that. We even have room for the camper. We are working on a plan for the house and Mom did get a few things out, the kitchen is almost empty of her things. We also had two turkey dinners, one made 100% by yours truly and we got firewood brought inside, so we should be able to start the wood furnace soon, I hope! It's snowing again. I have a 4H kid coming to see the nice chocolate otter doe we have for sale. So hoping that works out. Going to start on Christmas cookies but need to get a few things at the store.

Getting equipment out of the weather is always a good thing. Y’all are making progress.

Planning out what y’all are going to do to the house, moving walls? Drywall? Paint? Floors? Be sure to take before, during and after pictures!
You must log in or register to reply here.
Share:
Reddit Pinterest Tumblr WhatsApp Email Link