I don't think Rachel would really want those 2 little boys having the "keys" to the riding mower!

...oh dear, that's a scary idea. Yes, please no keys for the boys to the heavy, cutty, cool colored, choppy thing-and yes, it has keys, that are hidden somewhere. I have a hard enough time keeping them out of the washing machine and using it as a "merry go round" (dkfjsldkjsdlkfj!!!!! on so many levels!).
...come to think of it, I don't think we're anywhere far enough from the me saving them from themselves phase.

I let out the little bachelor roosters. The girls and Mr. Teddy are locked up in the 8x8 coop with the chicks. The bachelors are running around red alerting at everything like the hollow headed nuts they are. 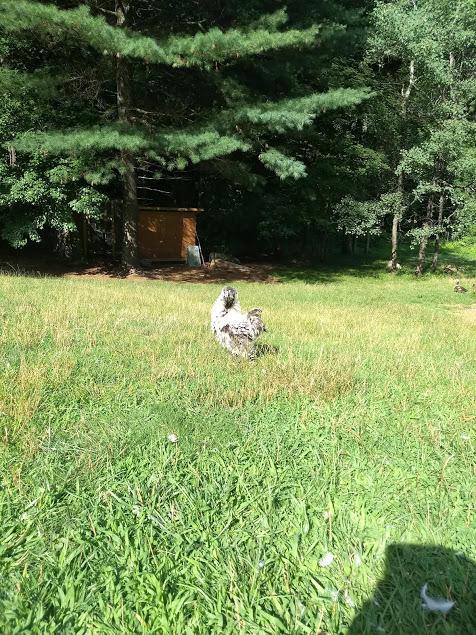 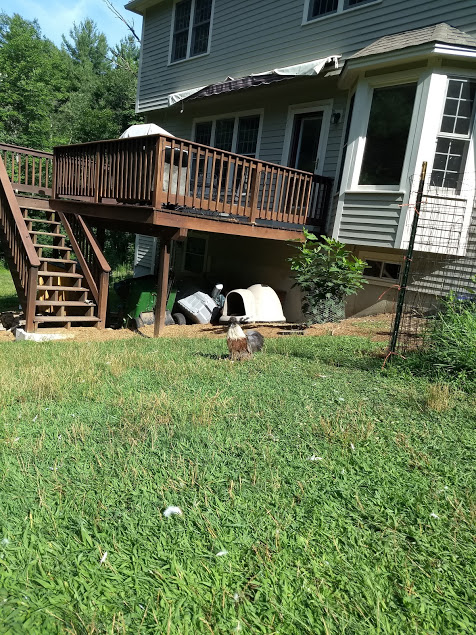 The silkie flock has been locked up with the chicks for over a week now. The polish chicks are smart-still tiny-but sharp. The silkies including the adults are not so bright. Teddy does his best to kick shavings in the water, trying to show off and feed his ladies for extra rooster points, and the polish pullets figured out how to clear it out so they can drink (the waterer can only be raised so far when there are chicks and adults together). If the chicks would just grow I'd hurry up and free range everyone together for maximum chicken fun.

I'm probably going to have to do something with the pekins. I usually lock them in the chicken run at night, and the chicken run is a terrible place now poo-wise with the rain and duckery. Honestly, with DH's work stress and no time to build another shed I should probably just sell them off and restart when he can help me or at least when we're not trying to survive a bad time. The younger kid wants me to keep 5 of them. If we're selling ducks, I'd like to be done with them all and restart all together with the exact sexed ratios we want when ready, so I disagree. It's just sad. They're good ducks. I just can't devote the time to shed building right now.

The goats keep having ploppy poo. I'm beginning to think it's the hay. The poo always seems to follow when they've had the chance to eat as much as they want all day and night long. The thing that makes me doubt that is that the bucks are fine and normal and on the same hay, so I'm not sure what's up. I guess the bucks don't get to eat as much as they want and I limit them to one bale per day. The goats have also been coughing when they eat it (course as it goes down? they gulp the straw and all) and occasionally have white snotty noses-maybe once or twice a week. I am fixing to stick someone with a thermometer, but I know what feverish goats act like, and no one acts off at all other than the above, so I doubt I'm going to get anything.

I should probably do a fecal on the plops, but again, no one has pale lids, and no one acts tired or wormy. I'm just sick of the mess.

Oh, and Lace is the first Lamancha starting a heat, hollaring at the bucks across the barnyard, and driving the month old nigerian bucklings crazy (uh, a little too ambitious?). She is also terribly behaved again. Among other things I got headbutted yesterday by that jerk, so I think it's time to notch and band some scurs. She is also listed for sale until breeding time, which it is not yet. She is pretty, and is really just a young goat and has a lot of developing and growing to do (in the head too), but I'm thinking I don't want to stick around for it if someone else would appreciate her more. She's a hard headed goat, and I don't want to keep goats around I have to be super firm with and expect bad behavior from. I've already got Ava. Moving her onto a herd would also take away her place in the pecking order and give her a humility check, and probably eliminate a lot of the issues all together. She's got some of the best genetics on this side of the country, but a terrible attitude at the moment. If she doesn't sell, she'd better chill. 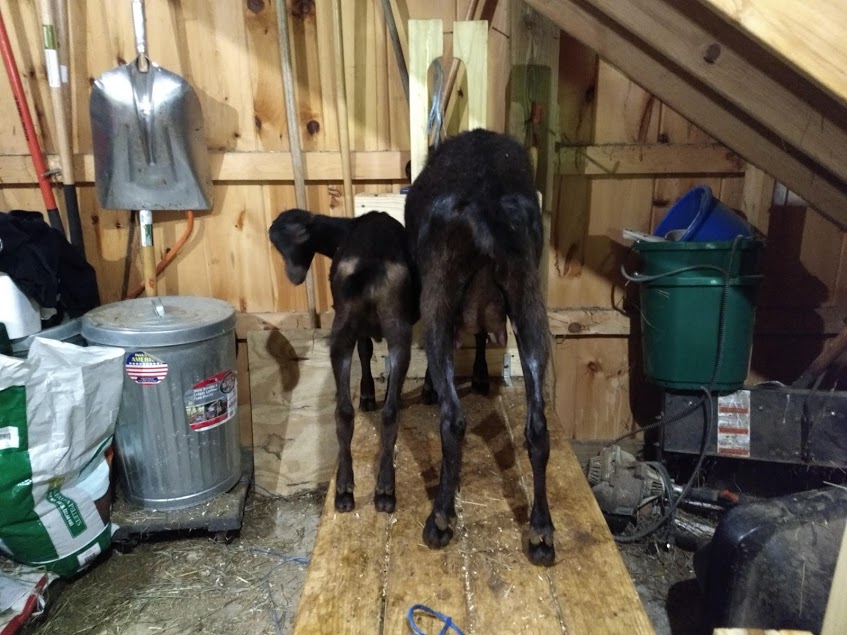 The wether with the processing appointment is sweeter and easier to handle than his mom, and I handle mom daily and him almost never. Pity, Lace has nice feet.

People in this state keep meeting my low "expectations" for them and it makes me so sad. My husband was 45ish miles into a 47 mile ride on his road bike and he ran out of water. He stopped at our gas station in town, covered his face, and asked to go to the bathroom to fill his bottles and was turned away. Now I've got a husband with weird recovery symptoms and I've got to put him back together again. He usually brings about half a gallon of gatorade dilute, and did today but he went through it. When he came home he drank about another two quarts before his shower, but it did not appear to be fast enough. Massachusetts, you have lost your "M". You should be embarrassed, but you are far too arrogant for that. Time to feed the guy who just burned through over a day's worth of calories in less than 2 hours, and keep him drinking and resting (some movement is good). I'd be mad, but I'm too busy being sad and disappointed.

What is wrong with those people? Are they given RUDE transfusions at birth? Or are they just born that way? How sad.

Fear is a powerful "motivator" and it is sad that sooo many are terrified beyond "good sense".....I sure wouldn't want to be stranded on a "lilly pad" in the middle of a "storm".....always better to have at least "some" close enough to help ya "back to shore".....

BOTH, the larger number of natives are born that way...... and all the transplants that have been around for years are even worse than the natives that are too uppity for their own good.

Texas is derived from the word tejas (tay-HAS) meaning friendly. We are a friendly bunch of people. I just don't get rude people. Smiles and politeness are free.
F

In Mass, arrogance and rudeness and stuck up know it alls and you are way below me..... is the norm. That and stupid drivers on the road.... and believing that they can just keep raising the taxes on the average guy because they have all their money in protected accounts....That's their entitlements.....free to them, costly to the "little dumb, average working peon of every color...."

Poor guy! They definitely should be ashamed of themselves..

He only needed water..Wasn't asking for much.