Well, I had a pudding pooer goat again today, so I pulled a few fecals on the goat that was runny and a few that had no symptoms AND....
...everyone has a ridiculous number of coccidia. Even the asymptomatic goats, which is why it seems like they're taking turns having pudding poo.
I called the good vet, since I'm dealing with 24 goats in that barn (bucks across the barnyard appear to have been spared) and she recommended maybe snooping around and looking for some of the harder to get a hold of things, and mentioned a Rx for the sulfa drugs, but doesn't like them as much because of the antibiotic part, but says they usually do a good job nipping it back if I have to use them. She seems to think the adults can muddle their way through things. Alternately she mentioned a medicated feed. We don't use tons of feed though, so I'm not sure if it would help or just breed resistance. I'll consider it after treatment.

So I guess at this point I'm going to break out the baycox for the keeper kids from this year-Dahlia, Trinka, and the new ND bucklings Obi and Ant. Then I'm going to corid the rest of everyone, since I don't have much Baycox and it's extremely expensive, so at least those who have a scouring baby's rear end to lick and infect themselves (3?)...and Ava because she had pudding poo for a while too. Then the others I will watch like a hawk, I guess.
After treatment I will clean the goats' sheets, and get rid of some of oocysts in the environment.
The wethers will need to be corid. Their processing date is coming.
We won't breed resistance this way I hope.
F

I have a calf on the nurse cow that is loose/watery. Decided today to treat for coccidia... this heat seems to help them find everything you don't want to deal with.

I know. Something about cooking the animals in the humid soup of summer really bring the inner bugs out. Who doesn't love forcing drugs down throats in a sauna?

Here's Saffron's cocci-hunch. Her side is making funny noises again and if you tap the hollow before the hip it sounds like a drum, but she's not terribly bloated. There's pudding poo waiting. I picked up the corid tonight. I'll be force feeding it to the adults tomorrow morning. She's barely eating a half ration. But now I can help! 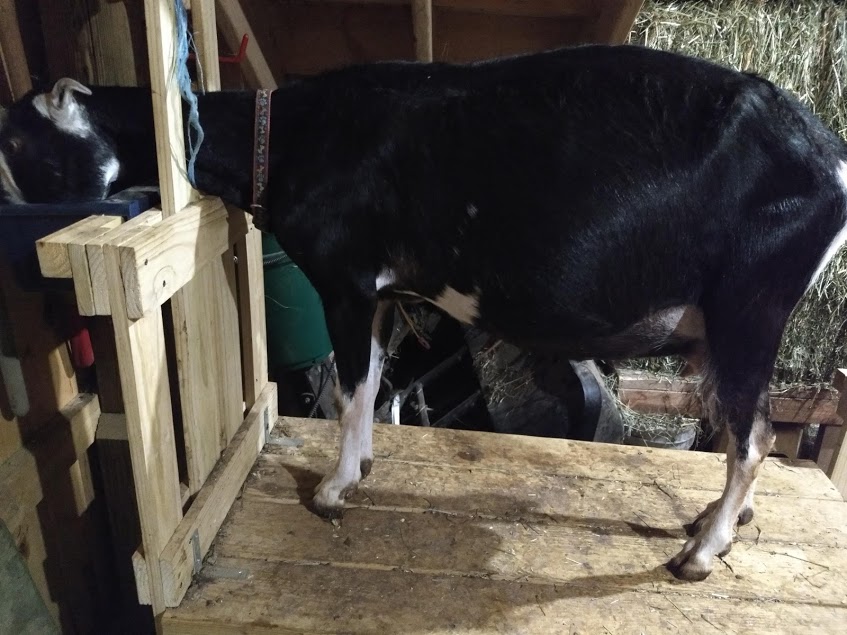 I didn't "like" it cause ya are having to deal with such....

...but, because ya know what ya are facing and have a "plan of action" to combat it with.....so much better, than guessing and throwing the "kitchen sink" at it hoping something will work....

Your husband needs to get a mule. It will turn around and come back home before it runs itself to death. LOL LOL

Good news for us, it looks like only the top pecking order does need treatment-excluding Summer, so we get to keep having milk during treatment and withdrawal. All babies will be treated. Go figure goats.

We seem to get a coccidia bloom in about half of our keeper lambs every season after weaning. We still pull enough fecal samples to confirm that's what it is but I keep a couple of water cans with "Corid" written on it so I just treat all of them when I put fresh water out each time.

rachels.haven said:
After treatment I will clean the goats' sheets
Click to expand...

And their pillowcases? Seriously, what does it mean to clean goats' sheets?

The thing that gets me is that 2/4 of the adult does that have coccidia I've only had to worm once in the year I had them, so I guess worm resistance doesn't apply to coccidia.


Senile_Texas_Aggie said:
And their pillowcases? Seriously, what does it mean to clean goats' sheets?
Click to expand...

The shavings in their stalls where they sleep. Some goat keepers call them sheets. I'd happily give them pillows with pillow cases if they would just be toilet trained, but a goat is a goat and they are potty pellet sprinklers and pee just about without thinking.

Don't know if I mentioned it, but I banded Ms. Lace's scurs and took her off CL at least until they fall off. Having tender horns has taken her down a notch. She's still a punk, but she's grunting at others when she would have normally smashed them.

Realized I miscalculated and have been giving Lace and Saf too much Corid today. Saf is bloaty and Lace has been going light on the hay to I rechecked my math. I wonder if I can stop them early and if I've given them enough of an edge over it yet. Probably not.