rachels.haven said:
Hope you did okay, @Bruce.
Click to expand...

No issues. A couple of inches of rain through the day. The ancient sugar maple in the front yard dropped a couple of dead branches, not big but one is probably 15' long. A small bit of firewood.

Whatever happened to Wile E. Coyote? Did he go away? And I seemed to recall that at one time you were having problems with hawks getting your chickens. Did that resolve itself?

If the dog is out and working and not living (and pooping) 24/7 in the barn the hawks don't risk it lately.
I'm not sure what happened to that big coyote. Several armed people quietly wanted him dead, so I'm hoping he got shot. The mass of coyotes will probably be back in the fall and Bailey will be waiting to bark them off.

Upduckdate:
This morning the muscovy drake ravaged one of the pekins. He must have known someone was coming for him to buy him as a dinner drake since i don't want to breed pied white heads. I also sold the pekin drake to the man so the injured duck will have no males to molest her as she tries to regain her walking ability and her bleeding stops. If she doesn't recover I will do her in, but we will make accommodations for her for a while. My five year old has claimed all the remaining 8 pekins for himself and his own tiny duck kingdom and says I am not to sell any more, and he can count, so I guess she'd better live. It's not normal for a muscovy drake to be so aggressive to other ducks, so I guess I'm glad he's gone. Sorry duck.

I still have a muscovy drakling, btw. At least one of the solid colored ducklings I bought is a drake. I think the other two are hens, but they are a VERY solidly built line that I am not familiar with, so I'm still waiting before saying I'm sure...at 8 weeks. He's sure not mature though. There is also a nest due to hatch under one of my white head girls. She was standing off it this morning in her nesting spot and it was not hot so there may have been some hatching occuring. They don't like to sit directly on the little guys as they pip. Drakes there too, I'm sure, and not keepers.

I kind of want to find a white hybrid layer drake for the pekin girls. My son likes his ducks white. I can stick with that theme. He'd also be lighter on them when he did breed. I may not mind not letting them have a drake boy toy either. The ducks of a 5 year old do not have to breed.

And finally, I'm trying to convince my husband to help me build 5 year old Dan a duck shack this weekend. I'm tired of having them exposed to the elements in regard to egg cleanliness. The ducks do not mind, but I sure do. They love rolling their eggs in mud and poo. Blah.

I'll take a pass on ducks. I've had Pekins-off to the freezer they went. I had runner ducks-I gave them away. My last effort were Muscovies-the ultimate farm duck. Nope, didn't make it-Trip decided they were on the menu, killed and was eating them when I found him. He lunged, snarling, at me to protect his kill and I beat him half to death with a handy pine limb. Took his damned ducks too. So, no ducks for me. LOL

Lol, yes, muscovy are that good. Worth fighting and getting a whooping for. Yeah, you'd better skip them with that dog around. Also, knowing them, they probably started the mortal battle with Mr. Trip themselves.

Well, the nest sitting muscovy has demonstrated her hatching intelligence by pushing almost every single one of her fertile, developing eggs down the hill out of the nest. She is down to two eggs. Guys, I don't think I'm getting any baby muscovy out of this pair of females I bought that had been bred for "egg laying and production". Both are epic fails on the incubation front (one abandoned her nest in favor of 4 week old ducklings, this one is rejecting and not caring for her eggs). Maybe the trio I bought from a local farm that breeds show quality ones will be better next year when they mature. Meanwhile, this pair might find themselves back on the market for egg laying since I don't really need more duck eggs (got 7 eggs this morning out of 7 birds counting the lame one and most are goose egg sized).

Lace is refusing to go down in milk production to just meeting the needs of her baby. She looked really uncomfortable this morning. So I persuaded her up on the stand and she matched and therefore doubled what Summer put in the pail before her, giving us over a gallon this morning for breakfast. Both got a huge, milking ration. I'm hoping to put some flesh back on Lace after the coccidia she had. That butthead can apparently make milk and now Saffron is dry (thanks cocci!) so we need the milk. The bucklings I'm raising are hungry and so are the human kids.

The pekin eggs tend to be large. We do get doubles, but these don't look like doubles. 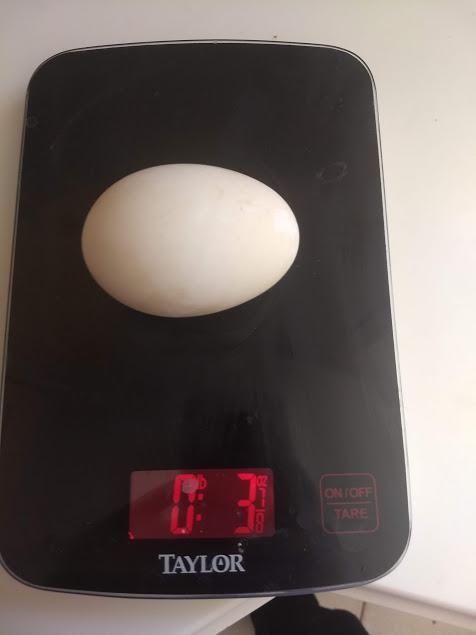 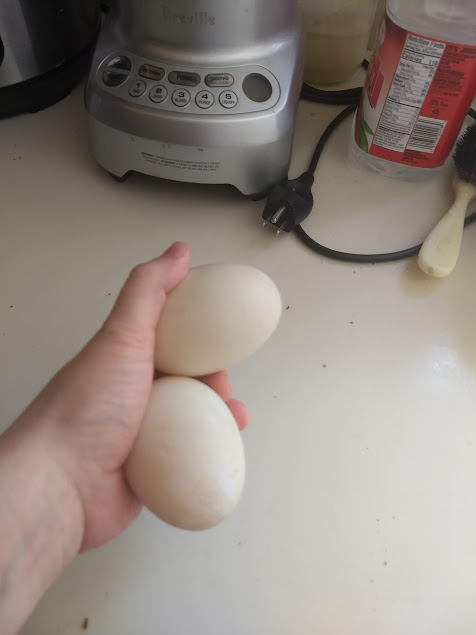 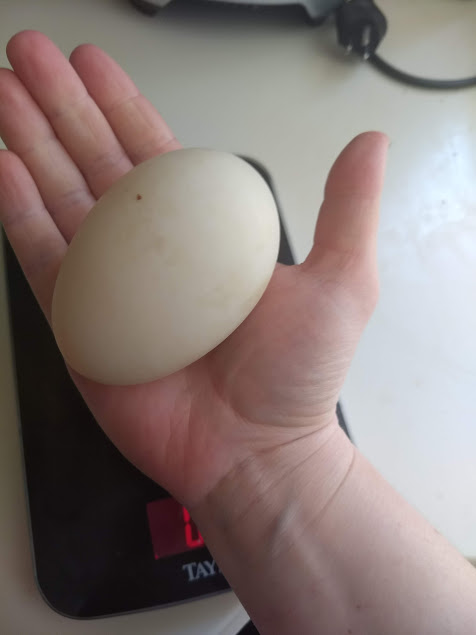 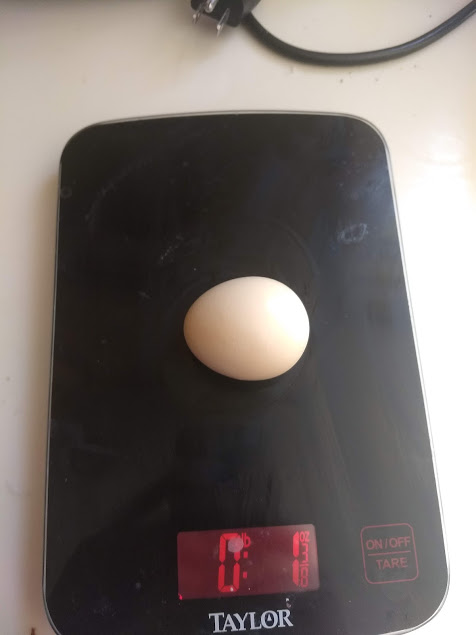 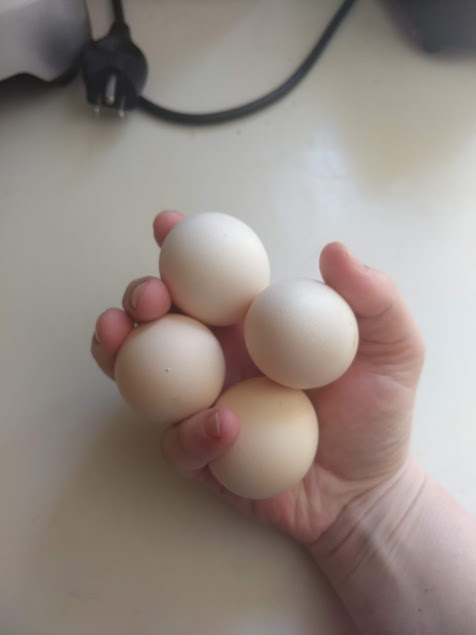 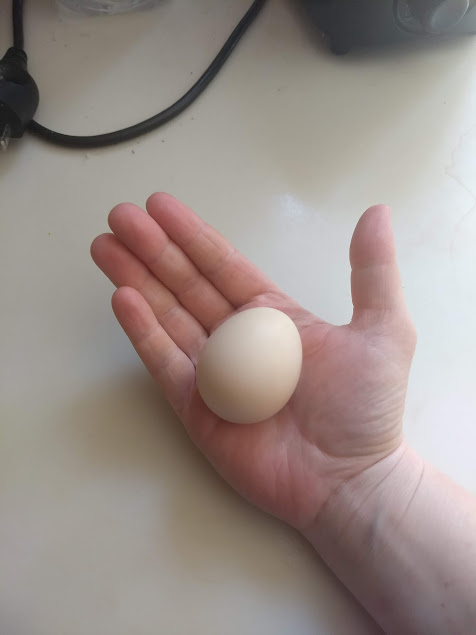 Sold Rosasharn MM Mili's Buckeye yesterday. He called for his bros all the way down the long driveway as they took him away, so it was a little sad. I didn't want to use him, but still sad. He will get many girls this year though, lol. He'll be happy when he gets there.

Having a "I hate people" day. Earlier I sold a couple 3 definitely female Pekin ducks. I had hand sorted them at maturity. We ate the drakes, and of course I double checked when crating at time of sale-a paranoid practice I will never quite doing now. They all quack. The next day they emailed and wanted me to refund and replace one of them because they were convinced one was a drake because she mounted other ducks. She quacks, and they acknowledge it. I said no, if it quacks (and I know it does) it's a duck. Eventually they decided she was a duck and told me so.

Now they want me to replace her with a healthy, not beat up one, one because their drake, that they got ducks for because he was raping chickens, beats her up without mating her and he is beating her into the ground and beyond submission and is going to kill her. Their argument is that because when they pick her up NOW she barely honks at all now, so she must now be male or hermie, so they and their drake deserve another duck to destroy.

I said no and now I'm ready for the fallout.
But hey, all ducks I sold WERE female. They were checked and rechecked. Our egg production went down accordingly. I'm mad as a hornet. And their drake's behavior is not my problem. I'd consider taking her back without refunding, but I don't want anything to do with them again and I definitely don't want them coming to my home. Letting known nuts come to your home is unsafe.

Oh Rachel, entitled people are just horrible to deal with...sorry you are among a bunch of them......
I have a girl who bought two rabbits and I GAVE her a nice free buck....she has been texting me for baby pictures, wanted pictures of both parents, birth dates and on and on, this has been going on for a week.....( she is raising them for meat) ....I finally asked her last night if she is making a $#==@<;;& baby bunny album to show the next kits.....people are beyond stupid