So they are silkies crossed with something else????

Nope, all silkie this round. The polish are still immature so no eggs of theirs got hatched. Maybe later. The polish do not seem super bright and the silkies are smarter. The best chance for any polish genetics to survive would be to cross them either the two silkie roosters and breed some chicks with more brains and less head fluff so I will likely let the silkies hatch some.

I like Polish. I say that, never had any, so if I had some, I might change my mind. I had never had guineas, I got some a couple years ago, they are dumb as a box of rocks. Their stupidity is amusing.

You'd probably like them. They are not bright, but sweet, and mine are staying close to home. They may be brighter than guineas and definitely less nutty than the guineas I've met.

That being said, mine are still babies. Maybe they'll grow out of it and grow some smarts, right?

We have 2 male guineas. They have discovered their reflections in the chrome trim on DH's truck. They get all excited and chatter up a storm to their "friends". Dummies probably think their reflections are females.

I like the Tolbunt Polish, they are beautiful.
F

Hey, @Baymule didn't you have some guineas hatch a little while back? Did you lose them? They are the worst mothers and they aren't real bright all around. But they do like to eat bugs and ticks.... just got to incubate them and raise them that way.

farmerjan said:
Hey, @Baymule didn't you have some guineas hatch a little while back? Did you lose them? They are the worst mothers and they aren't real bright all around. But they do like to eat bugs and ticks.... just got to incubate them and raise them that way.
Click to expand...

Yeah, out of 11 hatched, 4 survived. Then my #%&%^^ dogs went on a tear, guineas were on the "toy" and "menu" list. I beat hell out of my dogs with dead guineas until my arms were sore. I raged, screamed my lungs out, ranted and raved like an insane looney idiot. I went utterly ballistic on Trip when I caught him munching on guineas twice in the same day, beating him with one of the guineas until the guts came out of it, then I switched to a flyswatter. I locked him in the backyard for 3 weeks, making a point to go in every day, not look at him, speak to him or touch him. He came out very subdued. I couldn't catch who was doing the killing, but all the dogs (not Paris) were chasing them. So all 4 got their guinea beatings. Haha, the day I went ballistic on Trip, the sheep ran to the far corner to hide from me. Whatever was wrong with me, they wanted no part of it.

The new pup, Sheba kept chasing them, totally clueless when I scolded her. So I finally lost it on her too. I clipped a leash on her and we chased guineas. Or rather, I dragged her LOL. I'd get close to the guineas, and whallop her with a rolled up newspaper, while screaming at her. For some silly reason, now guineas aren't all that attractive to her anymore.

Out of 7, I have one left. One. Neighbor had a snake get after his, the male flew over here, so that makes 2 lonely bachelors. If we could catch the darn things, I'd take them both to the neighbor. He thinks he has several female youngsters.

So that is my guinea story. I enjoy the dumb things, don't know whether to start over or give up due to the blasted dogs.

No kidding! The worst thing I can say abou Bailey lately is that now she's an egg thief and a food bully. I'd be so ticked if she started killing the poultry she's supposed to guard (I'm ticked enough at the egg stealing). I hope getting beaten with a dead guinea fowl haunts them in their dreams-zombie guineas, back from the dead to flog them with their dead carcasses until the birds explode. Guineas-NOT what's for dinner. Not sure I'd have the guts to do that, but they totally deserve that association.

No, the polish aren't guinea dumb. They just tend to pick a special friend or group of friends and get "lost" from them and be sad and making it so they can see doesn't seem to help. They also took several weeks to figure out how to go back to the coop and nobody perches. It's like they have no memory or ability to remember anything period. I don't even think they can really tell eachother apart. They are very handleable, but they just kind of float from one activity in life to the next. It's a little sad, but they certainly DO get along with silkies. The silkies are much smarter and feistier than my McMurray standard polish girls. The positive thing is that they are hens, and my roosters already want to shepherd them.

Hey, but Polish are supposed to lay better than silkies their first winter, and we need eggs. 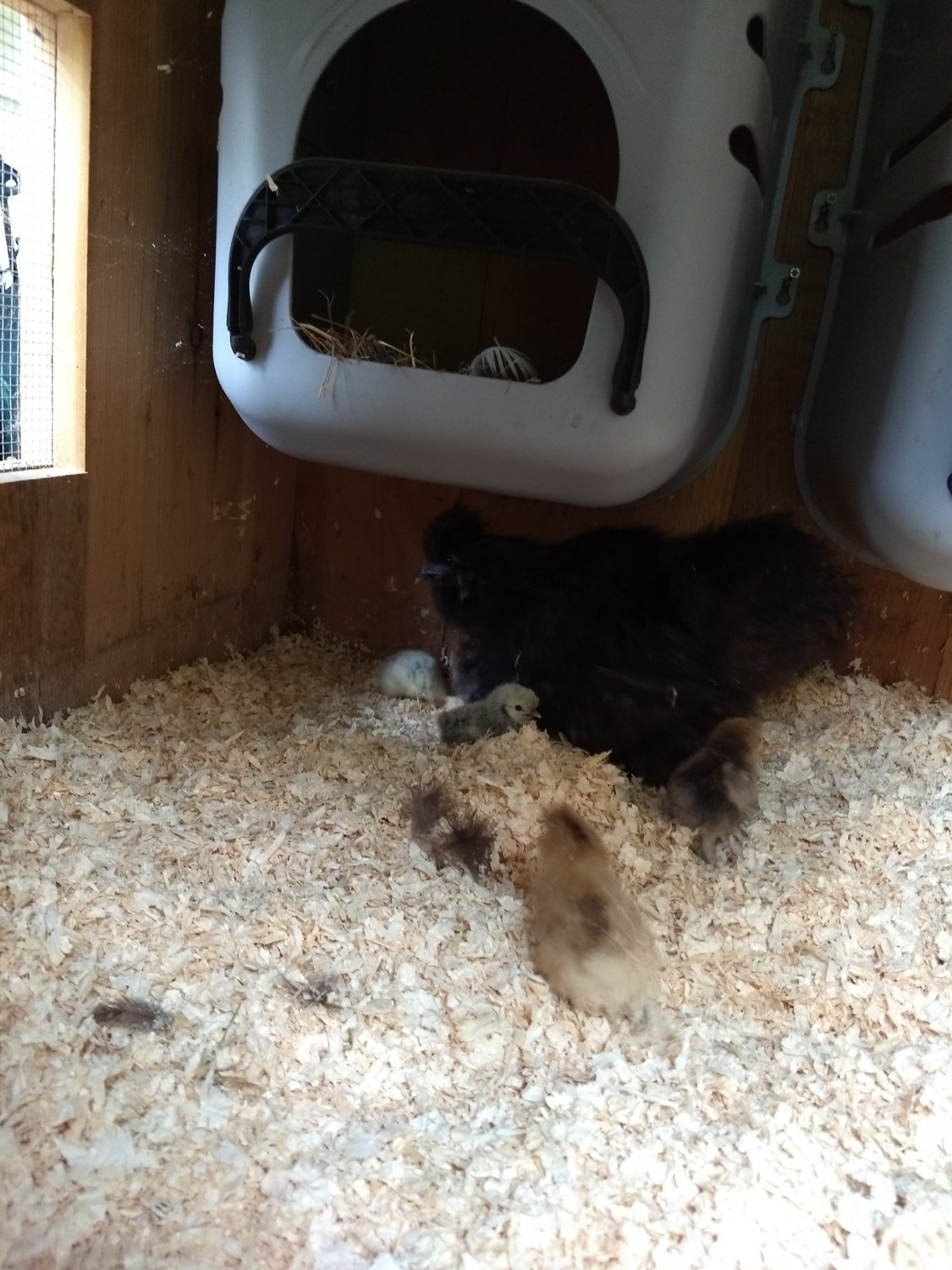 Mr. Teddy BABIES! Take 2! A different hen took up nest sitting on the remaining eggs. I really should candle later and take out the bads so she can continue.
You must log in or register to reply here.
Share:
Reddit Pinterest Tumblr WhatsApp Email Link