Sounds like Polish are dumber than guineas. I didn’t think it possible. LOL At least they fly up in a tree to roost.

Yes! BAD DOGS! They went totally off the rails. I had a HUGE pack disorder. Maybe if I had doped them all up with Ritalin I could have still have some guineas. I should write a post on it.

100 bales put up and stacked away. About 60 coming tomorrow.

rachels.haven said:
100 bales put up and stacked away. About 60 coming tomorrow.
Click to expand...

Wealth!!! I’d rather have hay for the winter than diamonds. LOL

You said it.
In addition to that more silkies are hatching out under the new hen to boot (and plenty more broody hens envying her to take the nest when she gets off so they can try to hatch every one). Go magical multiplying chickens, go.

Three new chicks and a few more eggs trying. I took out the rotters and the one that pipped and died, then separated off the eggs someone snuck in and had developed and put them under a different hen. Fingers crossed for the late ones.

Durango has been crying in the pen because the preggers does are bullying him and he's a disgusting, pee covered, blubbering fool, but in the end he's just a little guy and wanted to go home, so I sent him home to the bachelor pad, took my 87 pound yearling lamancha doe out and put her with the dwarf does, and added young Atlas to the three mature lamancha does I have left in their pen. I wonder if we'll get everyone bred this year. If Atlas fails, Buggy is waiting for does, I just want to bring my inbreeding coefficient DOWN before using him and bringing it back up. He's a little local, short bodied, but has great feet and throws easy milk daughters. Not sure I like his dam's rear udder attachment, but I think his other daughters have turned out okay in that regard.

For Trinka, the yearling doe, I'm shooting for 100 pounds before I breed her. She's getting there. Maybe November or December if she's still cycling. She's still...kinda short. Wide, but short. Not sure I buy the whole "87 pounds" by the weight tape thing. She's also NOT happy to be out of the lamancha pen and in with those pesky dwarves.

One of the late hatchers got booted from under the new mama and looks like it got chilled. Might have underlying issues, but it never hurts to give it a chance. My hands don't stay warm enough so it gets popped in the incubator after getting breathed on a lot and a little massage to get circulation back (ie, i made it mad enough to try to live). We'll see what happens. Late hatchers often die. The hens abandon them for a reason. I'll get a picture if it survives.
F

Getting pretty late for you to have chicks up there????? One thing, the late ones in the fall seem to feather quicker.... cover their chilly butts!!!!!
I had a hen that came with the house when we moved into it in CT, that we called the wild hen because we couldn't get her to go in the coop for anything...then she produced a batch of chicks in DEC ... I let my different pens of purebreds out loose regularly so the roosters naturally caught her.... and then when it snowed, she came in when I was doing some feeding with the door open.... and realized that if she came inside, she could have food all the time instead of having to scratch around for it and whatever I put out for her.... Within 2 days she had all the chicks in with her so she became the resident "inside" wild hen. I put eggs under her several times after that as she was a super good momma....

I didn't realize how fast the cold would come this year when I set the eggs, but I've had them hatch eggs in sub freezing temps too and I find I don't mind it. They do stay in the coop, and I have the old mini coop to keep them in here.

So I miscounted chicks. Apparently a hen that was sitting in the corner was stealing chicks as they hatched, she got bored of them, then left them all over the coop, so now there are 12 hatched chicks, 2 dependable broody moms, and one pipped egg still trying to hatch. Here's the none the worse for the wear chick (okay, so he's ugly, sorry). 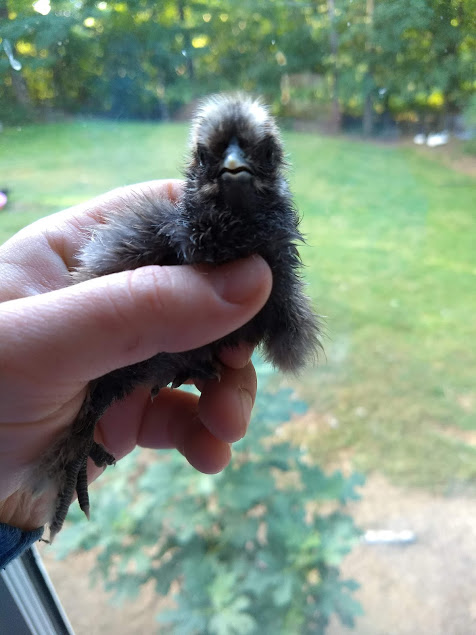 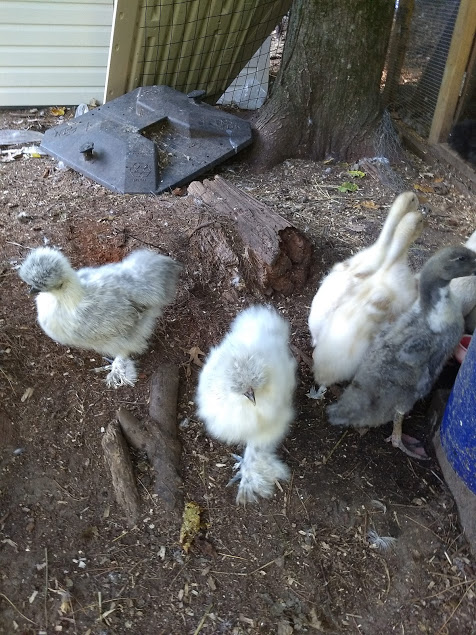 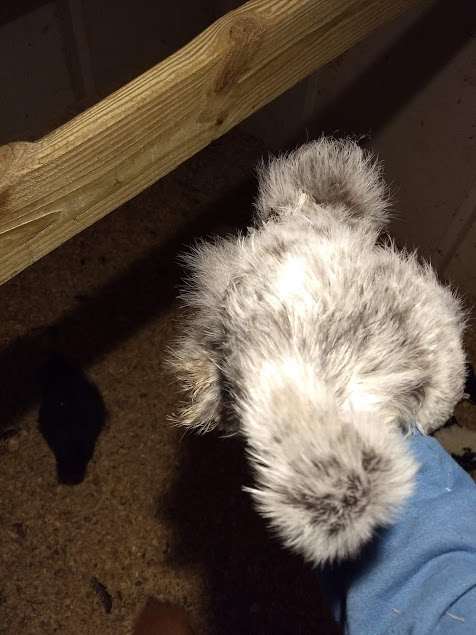 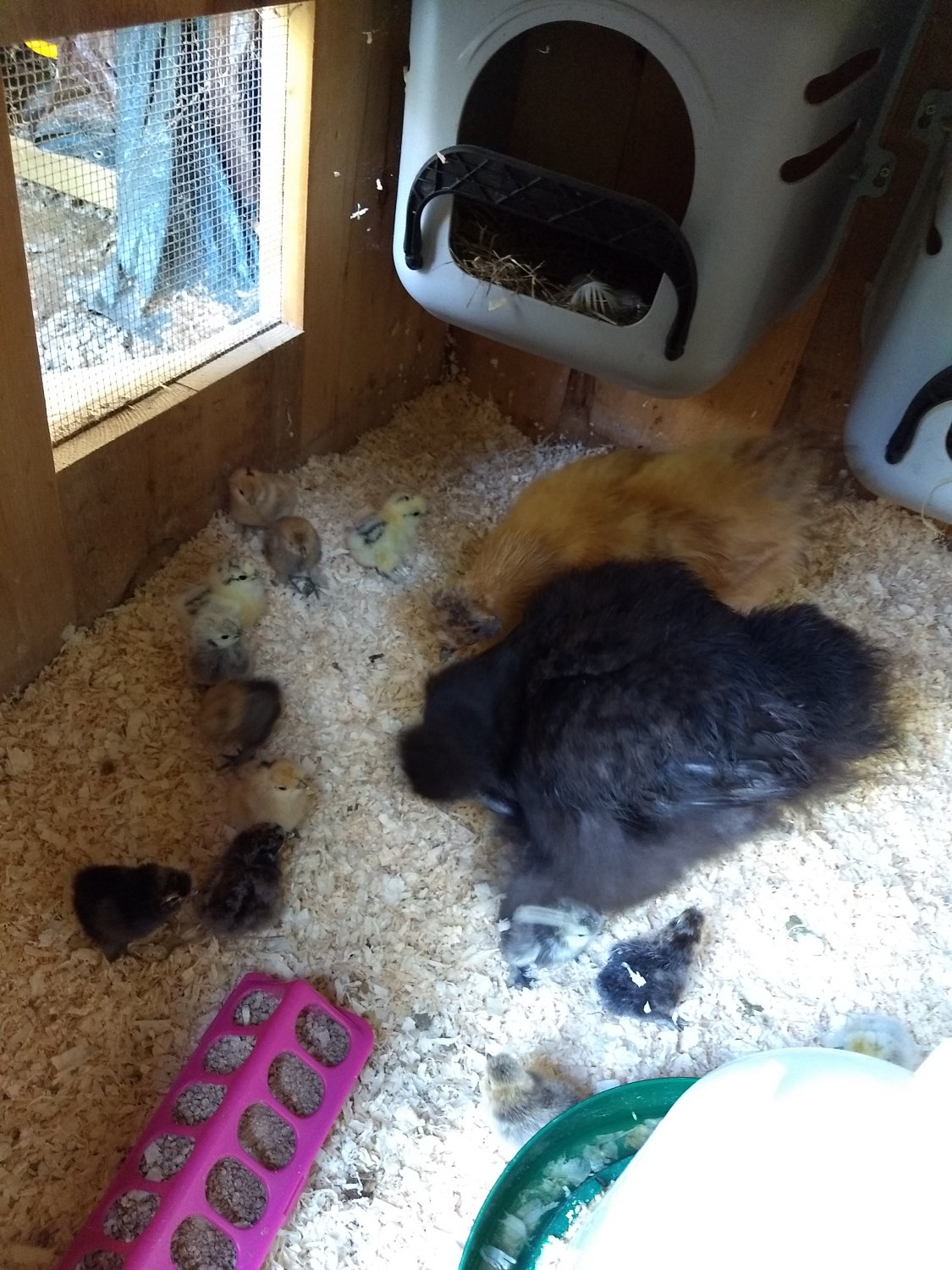 Grand total is 14 chickers. The one I "saved" has not splayed legs, but something is up with them so it may be a loss, but that's still pretty decent. Nest box is DUMPED...but the two snuck in eggs are under a different broody.
You must log in or register to reply here.
Share:
Reddit Pinterest Tumblr WhatsApp Email Share Link