Somebody's battling for her status in the already bred dwarf/staying dry Trinka pen today. I hope Ava goes down. They've already gone to bloody heads. If Trinka has the guts, she has the size. Problem is, Trinka is very laid back.


OH, and Ava mostly remembered her manners today. She blubbered at me, but did not try to jump me, push me over, or smash me. 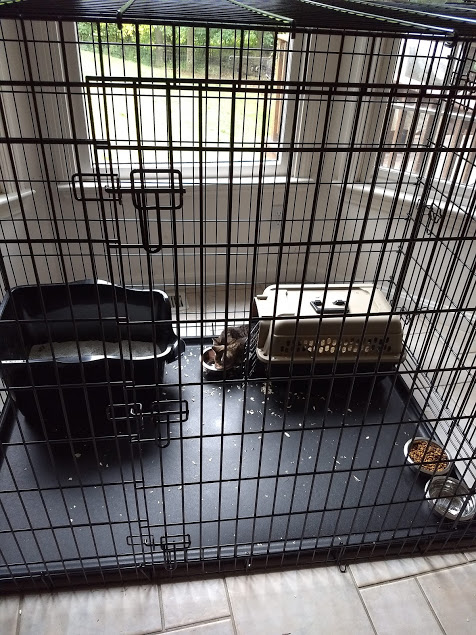 My daughter is a college professor, her husband is an assistant principal, they have 2 kids in school and 1 in day care. They are exposed to everything. I don't know how they do it. With them moved so far away, DD can't call me at 5 AM to babysit a sick kid. I just hope they all stay healthy this year.

Goat has been approved for use as a meat in this household. I may be doing something regularly on Sunday with it.

Oh dear, that would scare me so much. I really hope they stay safe.

And yes, that is two future barn kitties. I really want a pair. Wondering if I have to start with half a dozen to wind up with two permanent barn hands.

I bet goat burgers would be good. Always put a thumb print in the middle of the meat patty, it keeps the meat from drawing up when it is cooked.

@Baymule were you one of the people who were suspicious they'd already had covid? If you were (and if getting it gives you immunity) you could be really helpful to them if they do get sick. Best wishes either way.

rachels.haven said:
And yes, that is two future barn kitties. I really want a pair. Wondering if I have to start with half a dozen to wind up with two permanent barn hands.
Click to expand...

Yes, you pretty much do. We would start with a whole litter and their mother, and after a year only have 1-3 left. The third time was most successful. That year we got a pregnant indoor female from a crazy cat lady’s basement. We made her live outside. I fixed up a nice nest for her in the garage, but when the day came, she kept leaving it and coming to me crying. She went to the door, obviously telling me she wanted to go in, so I let her, and followed her as she explored every nook and cranny. She chose the upstairs hall closet which is a walk in. An hour or so later, she started delivering the kittens. Of course, once that was over, I moved them all back to the garage in a large dog crate.

There were 5 kittens, and 3 of them lived the longest we ever had a cat. 7, 11, and 12 years. We attribute their longevity to being raised by a paranoid indoor cat that never allowed her kittens to stray far from the front porch. We think she taught them to be extremely wary.

Good luck with your kittens. Are they male or female? We always neutered our males as soon as they were weaned, but left the females intact just in case we needed more kittens the following year. But the females didn’t always make it to the next year. I wonder if that’s because they were intact. I might try spaying future females and see if they live longer.

We got lady cats this time. I'm still deciding on the spay timing. This barn cat thing is more involved than I thought.

Well the tip that was given to me years ago by the place my daughter took her first riding lessons, was that any male kittens would be run off or killed by whatever neighborhood tom already existed in a place. But not if the male kittens were neutered at a young age. So we did that and it seems to hold true in our experience. Different “stray” toms would come and go over the years, and when we saw them, they did not bother our boys. They would just eat their food and our boys would just let them. (We also saw them sitting by and watching raccoons eat their food too.

The neutering of males is not a bad tip. I've seen it at a neighbor's house who left all cats intact. Only the females stayed. The males either wandered off or were driven off.
You must log in or register to reply here.
Share:
Reddit Pinterest Tumblr WhatsApp Email Share Link