*Sigh* today I got to deal with a yahoo who thought they could shove Lace in a small dog crate and pick up a $50 buckling from a NH dairy in the same trip to be her permanent companion. This is why I don't list goats cheap. I think I'm going to keep her until she kids and either then list her (so she can teach those yahoos a thing or two? some part of me asks) or to really ship her with the wethers.

This, for reference, is all a good guide to goat bucks. You don't house them with does!
https://fiascofarm.com/goats/buck-wether-info.htm

It all goes back to one of my favorite sayings,

The overwhelmed of moving has set in. The kids have a week off before closing week after next, so I don't have to play teacher/taskmaster then. Dh will take that week off and part of the next so we can pack. We still don't have that much stuff despite the big house...thank goodness.

Yesterday Trinka had small buck/doe twins by Rustic Wood's Black Tie Affair. She's the first doe I've had to date that refused to push so it was a waiting game for the baby to ooze out enough for me to pull. The buckling got a puffy head and tongue. It subsided by the time his sister oozed out. Both were small kids. She's a yearling milker now. She needed evening out, so I milked her and she's doing good on the stand.

Lady is doing well on the stand too. She's just in the habit of throwing her weight around on the way up. Now we just need their milk to clear.

Moses is happy. When I go out to milk in the morning he likes to stand on top of Bailey and bark and jump on her until she does anything, then he tries to get her to play. She is gentle most of the time and he tells her when she's not. He wouldn't have it any other way.

The last doe to (maybe) kid is Lace.

I have one pair of wethers leaving on Friday, the next the following Saturday.

An odd thing happened. The people who wanted Lavender the tiny teated dwarf left a $30 deposit and left with the understanding I'd contact them when she was ready to be separated from her wether. So I contacted them on Sunday via email and text and no response still. I even offered to mail their deposit back if they had changed their minds. So I guess I'll wait a few weeks and relist her as a pet for $250 instead of $150 and maybe get a better crowd?

Just took Trinka and her kids out. Still deciding if I like yearling milkers developmentally speaking. They still reach the same size. Just small now.

Anyway, the trip stressed her out, so after a few minutes, back she went. 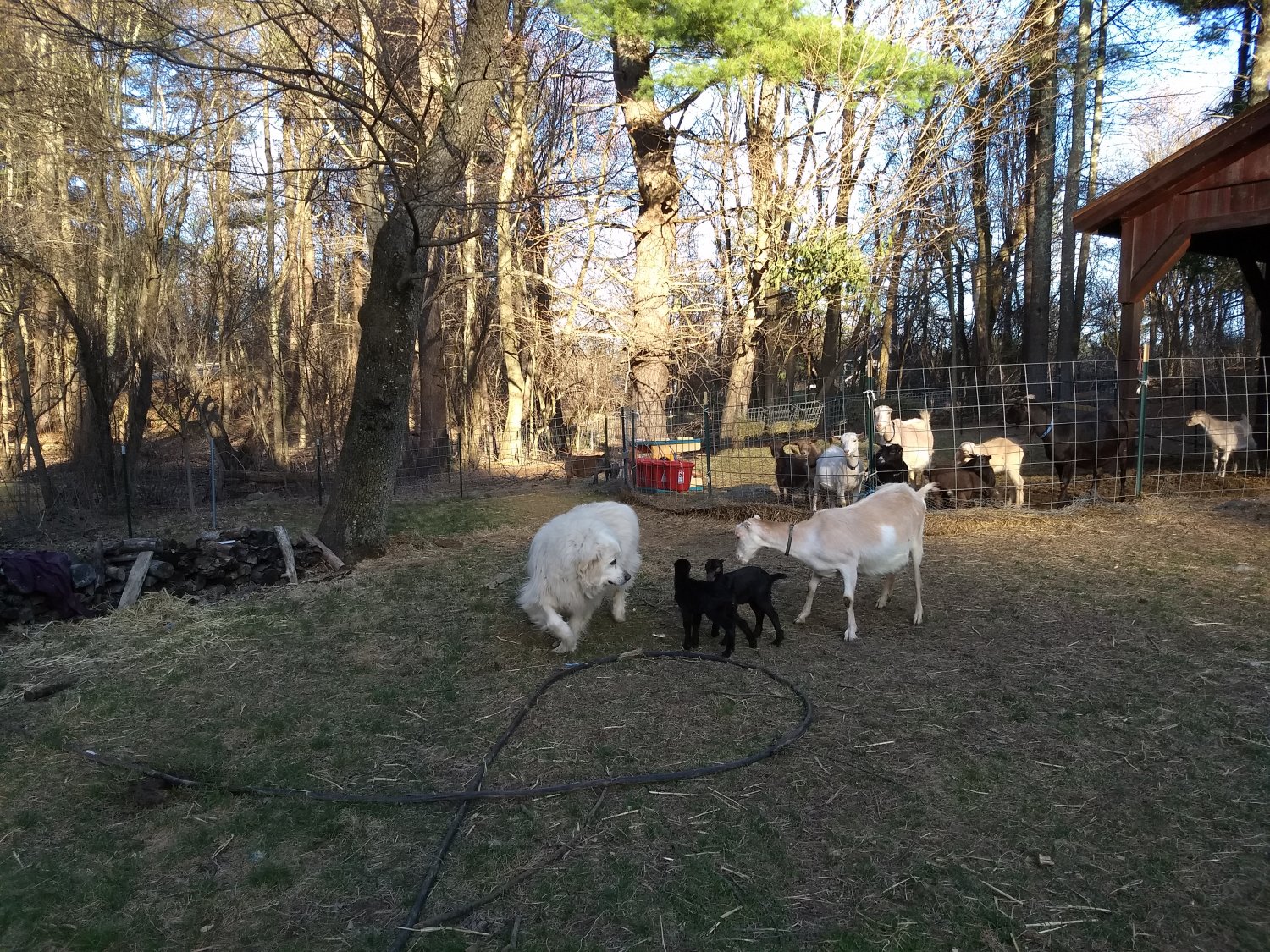 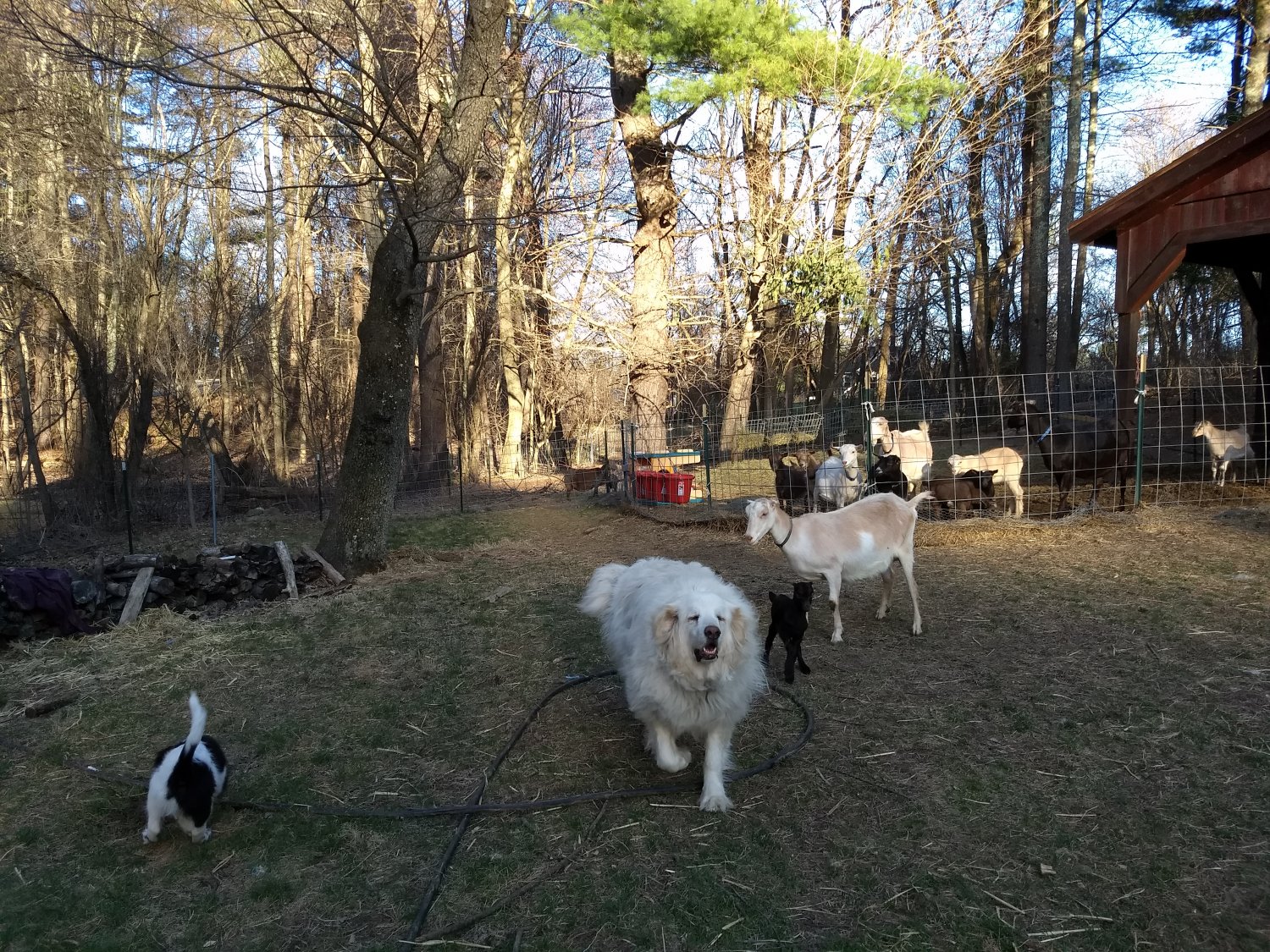 Happy Bailey and mud puppy Moses in this one. Bailey approves of her new kids. Moses approves of MUD and can't pass a water dish inside without jumping in it and knocking all the water out, so he gets water on the hour every time he gets out-and mud too. His coat seems to shed that well though.

Rachel, when my puppies are 4 weeks old they use a new chicken watering container to drink from...at 6 weeks they get a regular water that holds half gallon and gravity feeds the water as it's used, but I set it up on a crate so they stand on their hind legs to drink and can't play in the water....works great for less mess. MOSES was drinking from it , you may want to try that for his water that is inside the house.
On the mud playing lol...you gotta figure that one out lol....

I think there are only three puppies in this current litter that are just chilledout like Moses, he. Is such sweet boy

I'll try it. If it doesn't work and he still uses the water as a toy when bored...well, we take him out a lot and the water is cool and fresh there and the splashing doesn't matter. I think eventually he will stop. If not...well, he is a water retriever breed x water retriever breed. We'll just make sure he gets lots of water every hour or so. I may try a dog water bottle at some point as long as he doesn't figure out how to bathe in that too.

Sure Moses doesn't have duck DNA in there somewhere? Did he get an animal Covid vaccine shot?

Big dead tree by the house got removed on Monday. -$750. You pay a premium for reliability around here apparently.
I banded chickens and determined that I have 9 or 10 keeper hens.
Patrick the nigerian dwarf buck was listed for $800 and somebody jumped on it (I bought him from Rosasharn farm for $1,200, not cheap). I expect him to go home on Thursday. That will help with a deposit for goat shelters.
I got the DNA tests for the other dwarf bucks in the mail. Apparently you can't sell dwarves very easily right now if they are not tested because of pedigree faking and crossing in of standard goats to improve production...hmmm...Hopefully they will come back as claimed.
One doeling and one doe is going back with the doe's previous owner in theory.
Lots got done, I'm being crazy busy lately.
Next week=no school and husband off into the next week and it's the week before close. Guess what we're doing? Spring break? No way. It's going to be busy just as it should before moving.

Oh, and I listed Max the lamancha buck. He's going this weekend. I really don't like those darn Barnowl line feet.

And as a Moses update: he's doing better with potty training and not going in the house. This has let us let him run free inside more out of his playpen (or crate) with looser supervision and for some reason he's taken it upon himself to eat all the large black ants that come in and pester us every year so I won't be poisoning them and I will be amused. He's also attached himself to Aiden, who tends to be anxious so now Aiden's toting Moses around everywhere he's anxious about going, so I'd consider that a win. Next week I believe he gets another round of shots and I **think** after that we can start taking him out on walks and adventures. Then we can go on walks with two dogs.
You must log in or register to reply here.
Share:
Reddit Pinterest Tumblr WhatsApp Email Share Link