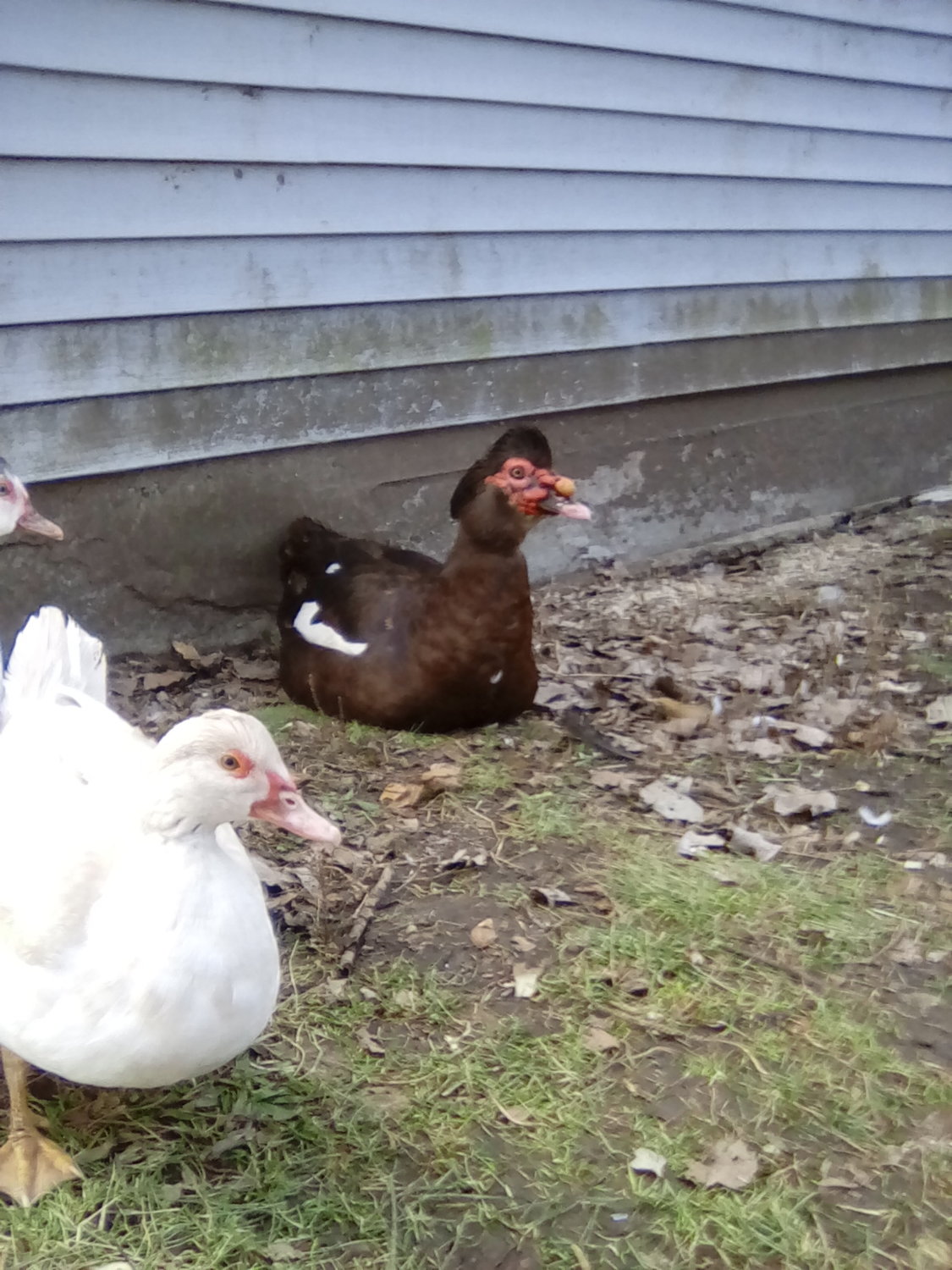 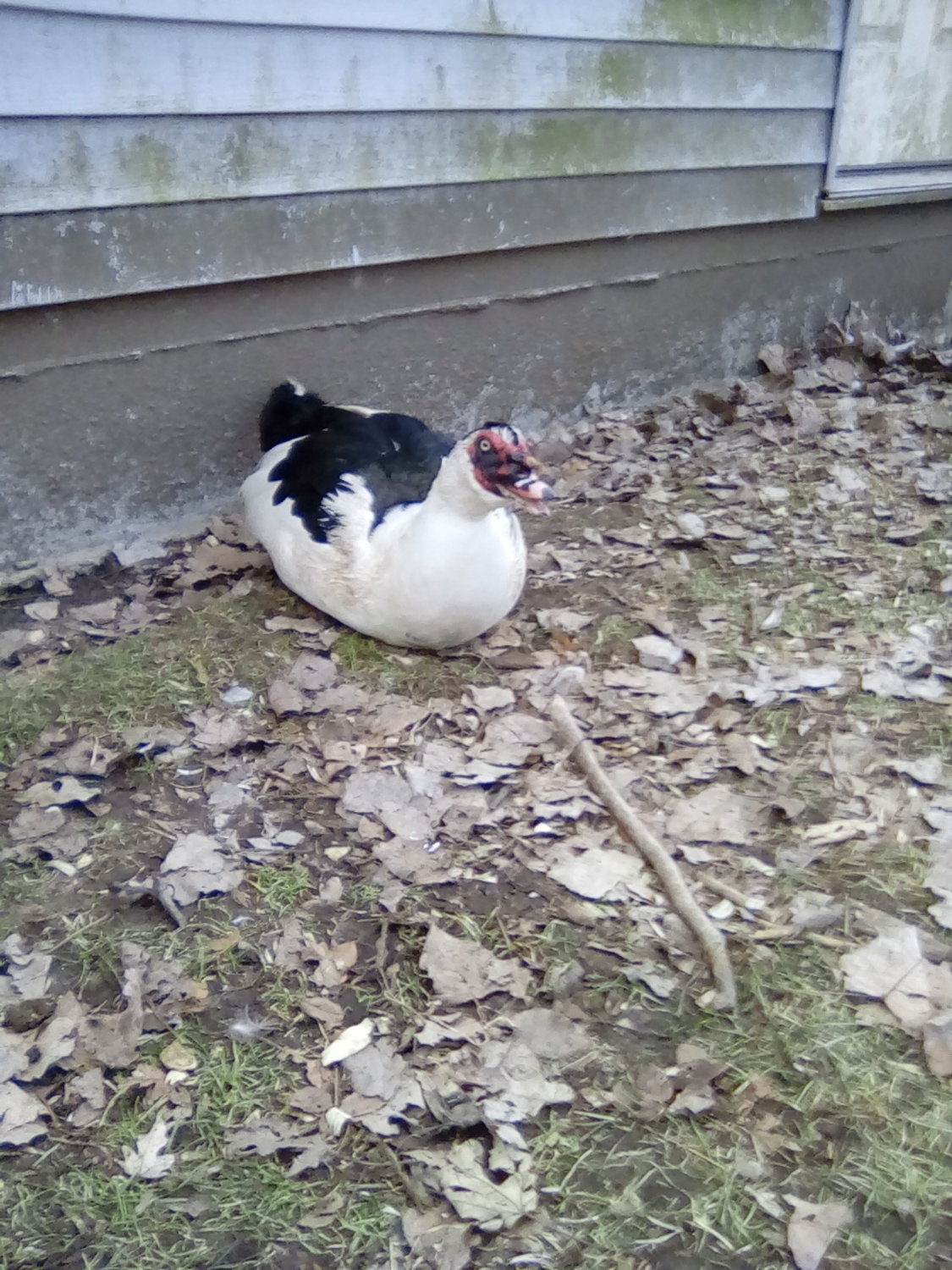 Elvis looks like a gator in this one. He's really a nice, gorgeous guy, but he's trying to dance with me here. I'm his buddy until nail or wing trimming day. Then I am shunned . This is our third year with him, and Cocoa's second.

For a first attempt at construction, your DH did a really good job! Looks great! Thanks for the pics.

Kinda funny how our animals love us right up until we try to do something to benefit them.

Well, last night we tried to let the bucks out, one at a time to be handled and work on posing and to "run around and play" as my four year old put it. Lol, bucks do not run around. Just run back and forth around the other's cage, trying to terminate each other through the wire. Silly boys. As soon as the basement is done being cleaned out, back into the hole they will go! At least until spring, then they'll go out on the cage rack.

I'm so glad the does think about stuff besides covering other rabbits and fighting...like digging, nesting, and eating. I might get some pictures of the does later. They're still nesting robots right now, but one of them is starting to take breaks for pictures now and again. Kindling date should be this weekend sometime. Then they'll be all about food, food, food and probably more digging.

Also processed my extra cockerel. After butcher and cleaning I was left with a 5 pound 8 oz carcass at 10 months. Not bad for a heritage type breed. All done with all foreseeable butchering until the muscovy ducklings that haven't even been set are 16 weeks old, unless we have rabbit culls or if there are any pugnacious cockerels in the three accidental hatches we had late this fall. Still not out of muscovy from the fall, which is good, because we have at least about 6 months to go before the freezer starts getting filled again.
Last edited: Jan 29, 2018

This Sunday brought us the kindling. My black doe, Arkansas Black (AKA: Apple) had 4 kits, 3 peanuts and 1 normal sized kit. 2 of the peanuts already passed on, trampled at birth because she's a first timer, but they would have died anyway. One peanut still hanging in there for now. Apparently Apple is a true dwarf. Funny.
Rhubarb, my red doe had 5 healthy, normal kits. I am pretty sure Rhubarb is a false dwarf, but honestly, that's not so bad. She's still right around what a mini rex doe should weigh. If she ever throws a peanut, then I'm wrong about her big ugly status. We'll see.

Pictures as soon as I get around to it. The does are back to their normal selves and everyone but the bucks are chilling again-and the bucks want those does and nothing else. NOPE. Kind of want them back in the basement at least, then for it to warm enough for me to be able to take care of them outside without dead ice fingers. Basement isn't cleaned out yet though, and it's still so winter.

Here's Apple's one baby. Rhubarb rejected one of her crazy kits so I rolled it in Apple's litter box and dabbed it, Apple's nose, and the other kit with vanilla, and slipped it in and it's doing much better now. That's why we have red and black in the nest box in one pic. 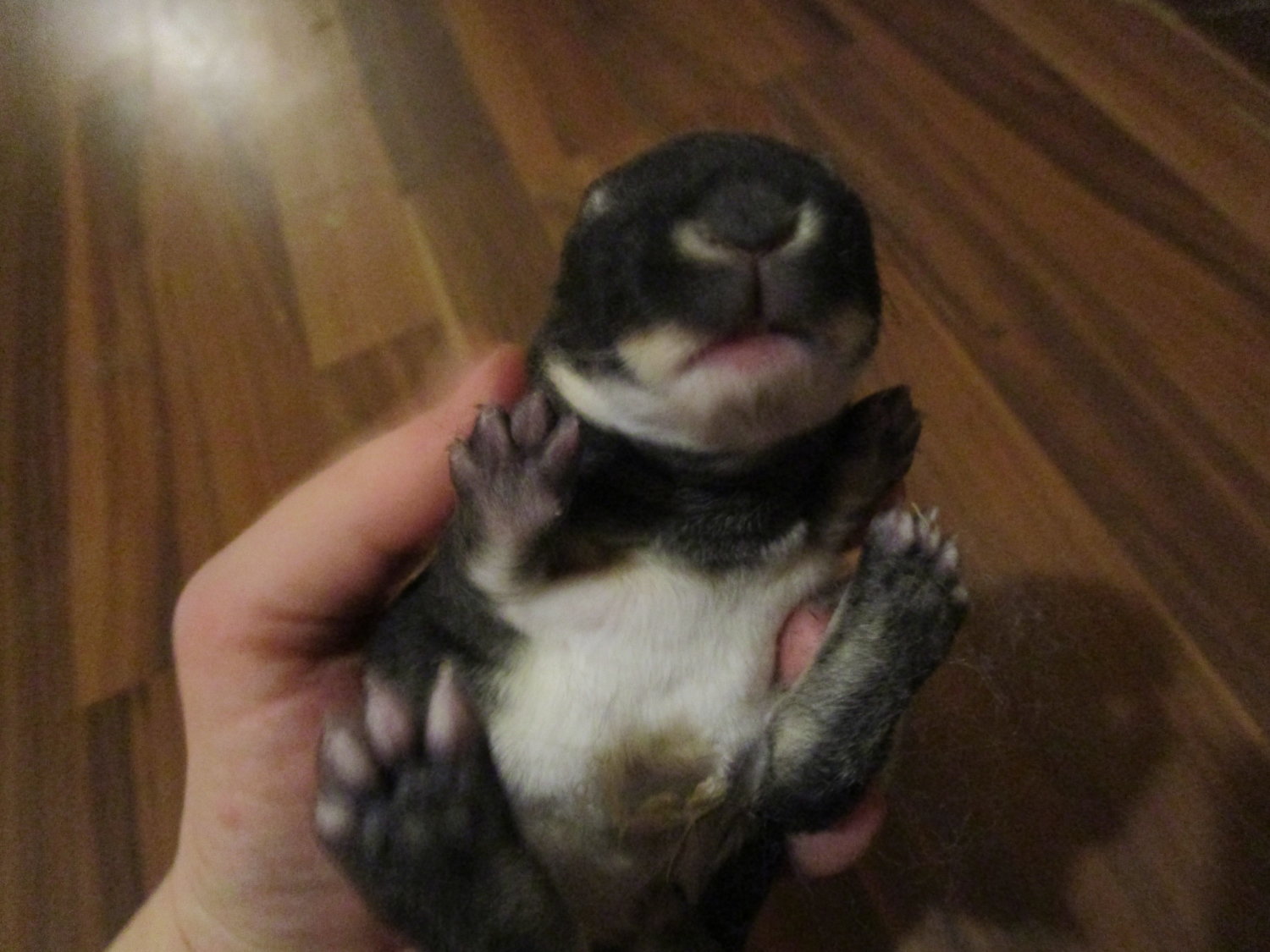 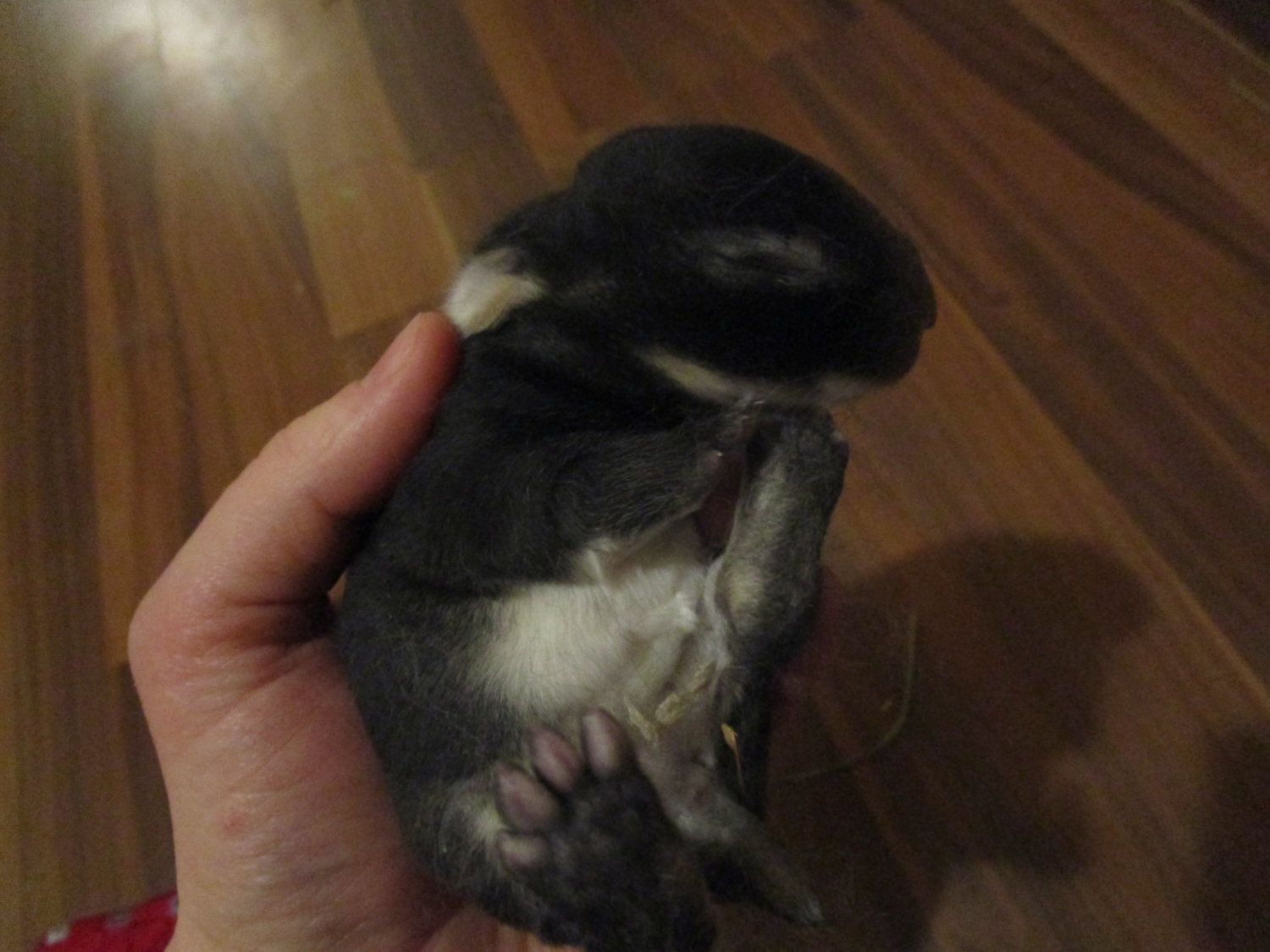 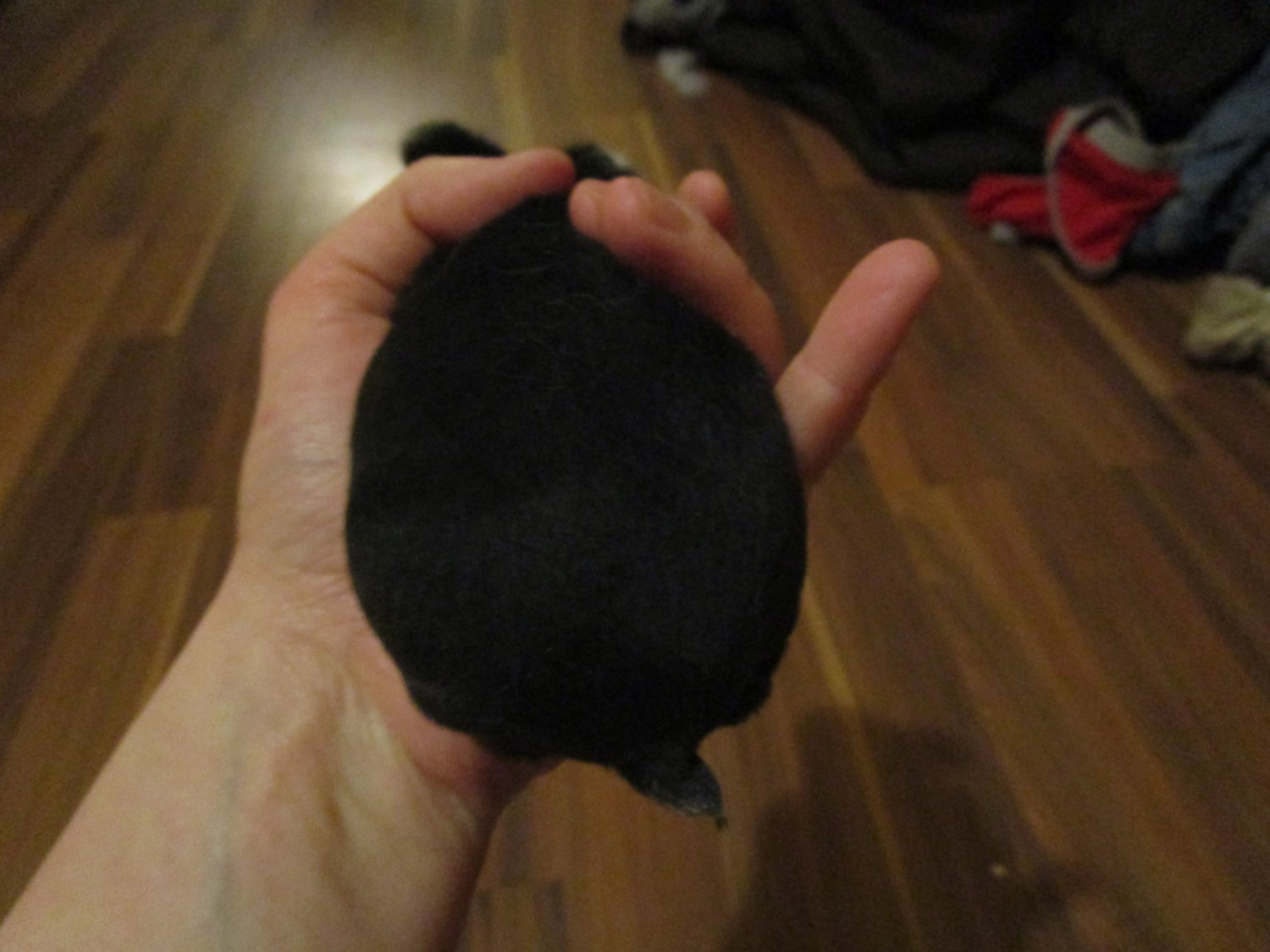 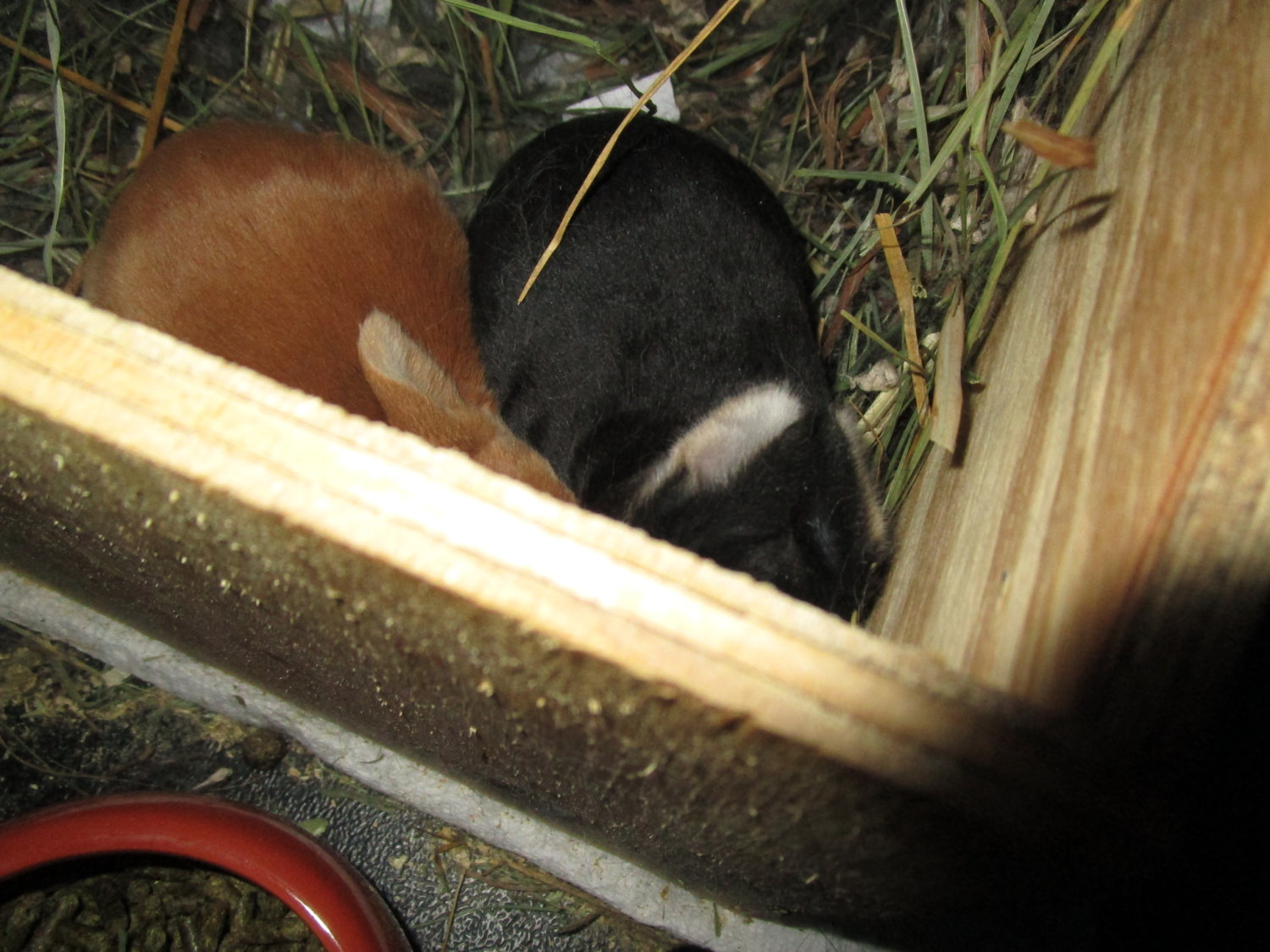 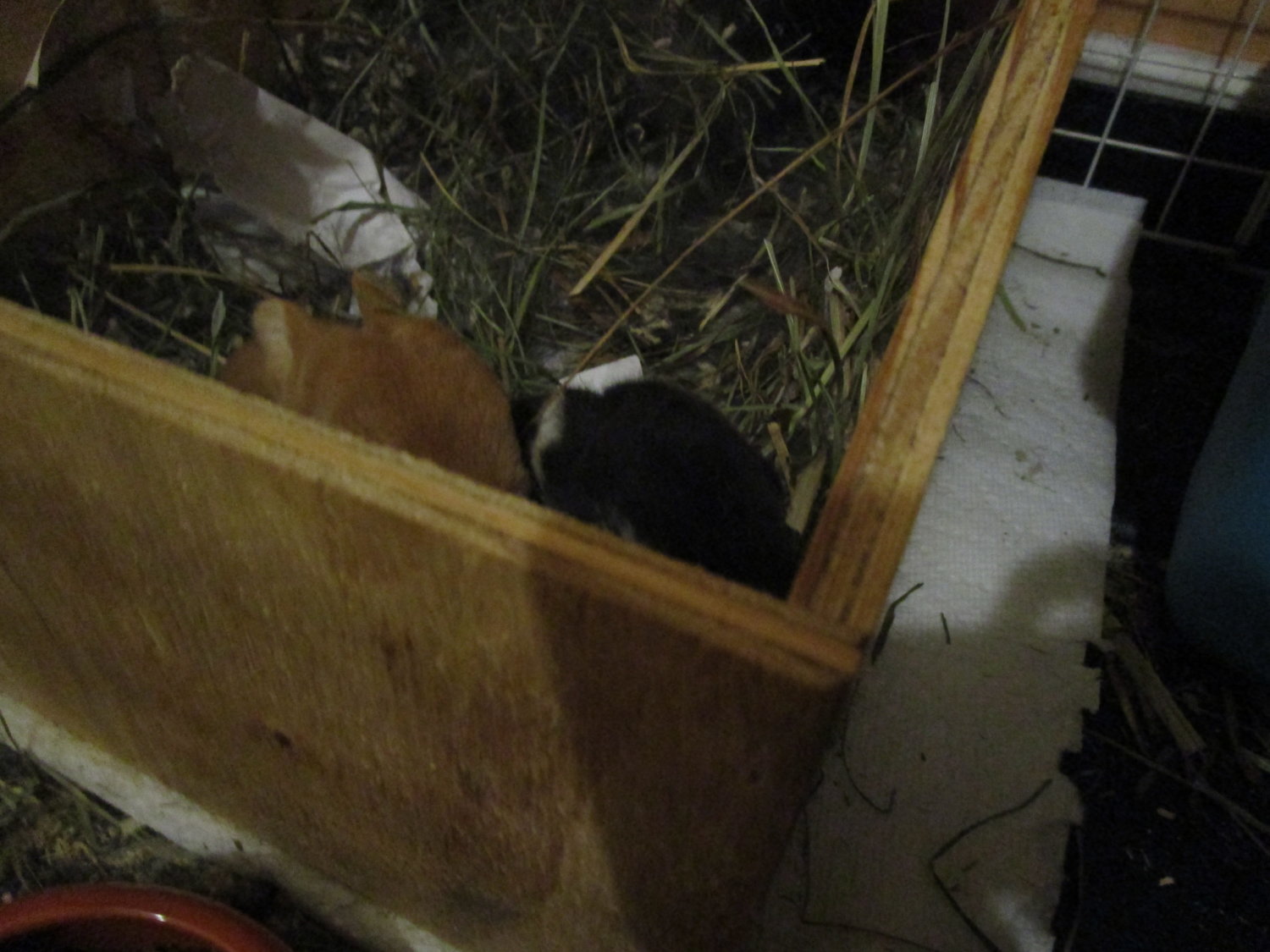 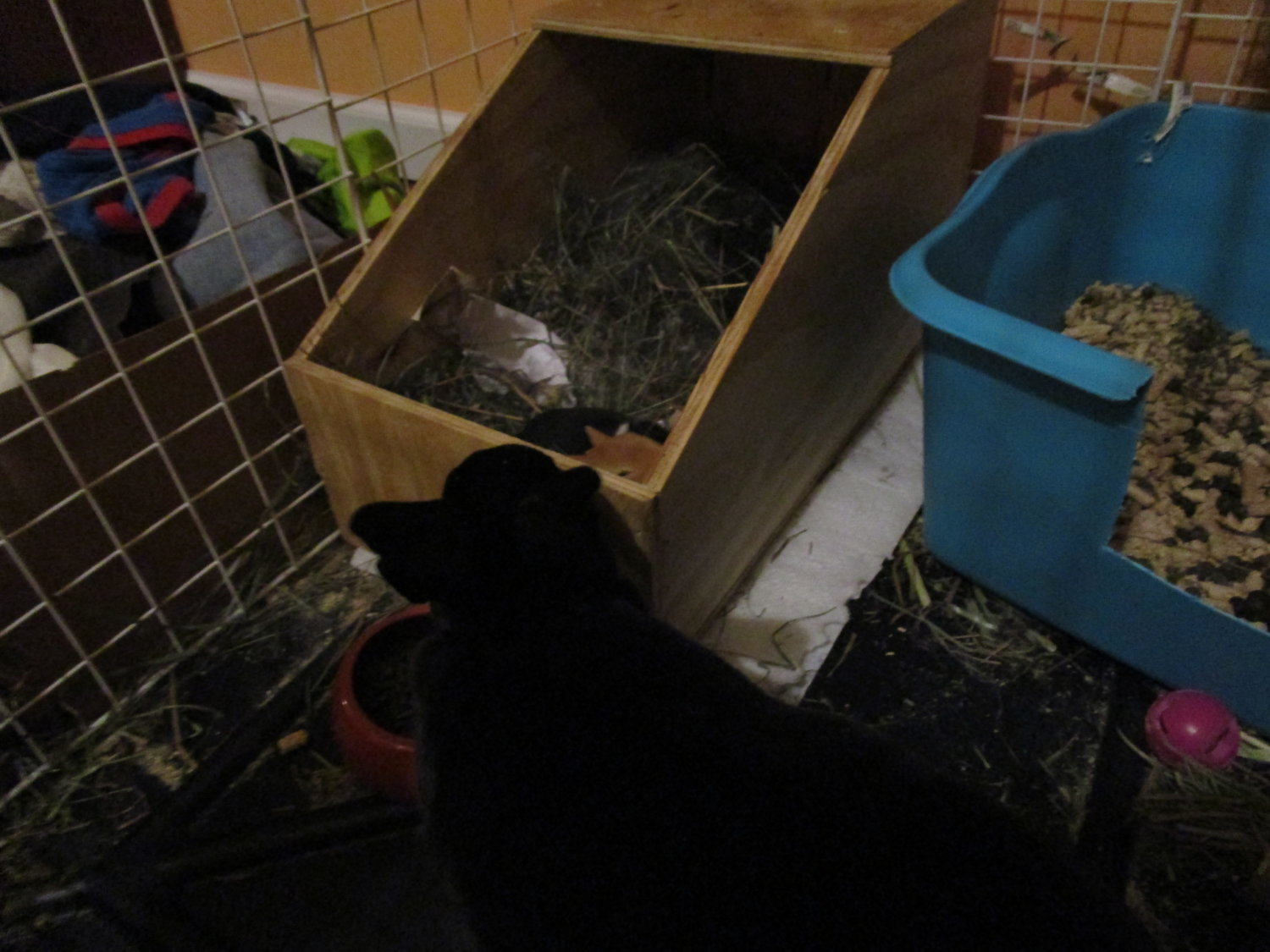 The picture with my hand around the kit's shoulders is to show how round the kit was. The bulge you see is just it's belly. It was a singleton for a good long time before I added the little red. Single babies get FAT. Also, does in Apple's line really like nursing their babies, multiple times a day, almost every time you turn around.

Very tired Rhubarb (I accidentally used flash, so she got red eye, she does not really have red eyes). She has four kits since I subtracted the one she didn't like when it started getting skinny and gave it to Apple. She's kind of a temperamental doe, right at the limit of what I want to put up with, but in her defense, the first thing her babies did when I went in to inspect for deads after birth was jump up and bite me. I've never been bit by an hours old kit before, much less a whole nest of them. My mom, also a rabbit breeder, calls them "vigorous". They are a lot more normal now that their eyes opened last night, although now they are starting the "chasing mom all around the cage" thing already, and Rhubarb gets kind of feisty with them, and even feistier with me when I try to put them back. Wonder how the next few weeks are going to go for them. We might be doing an early weaning if any bunnies start getting beat up. 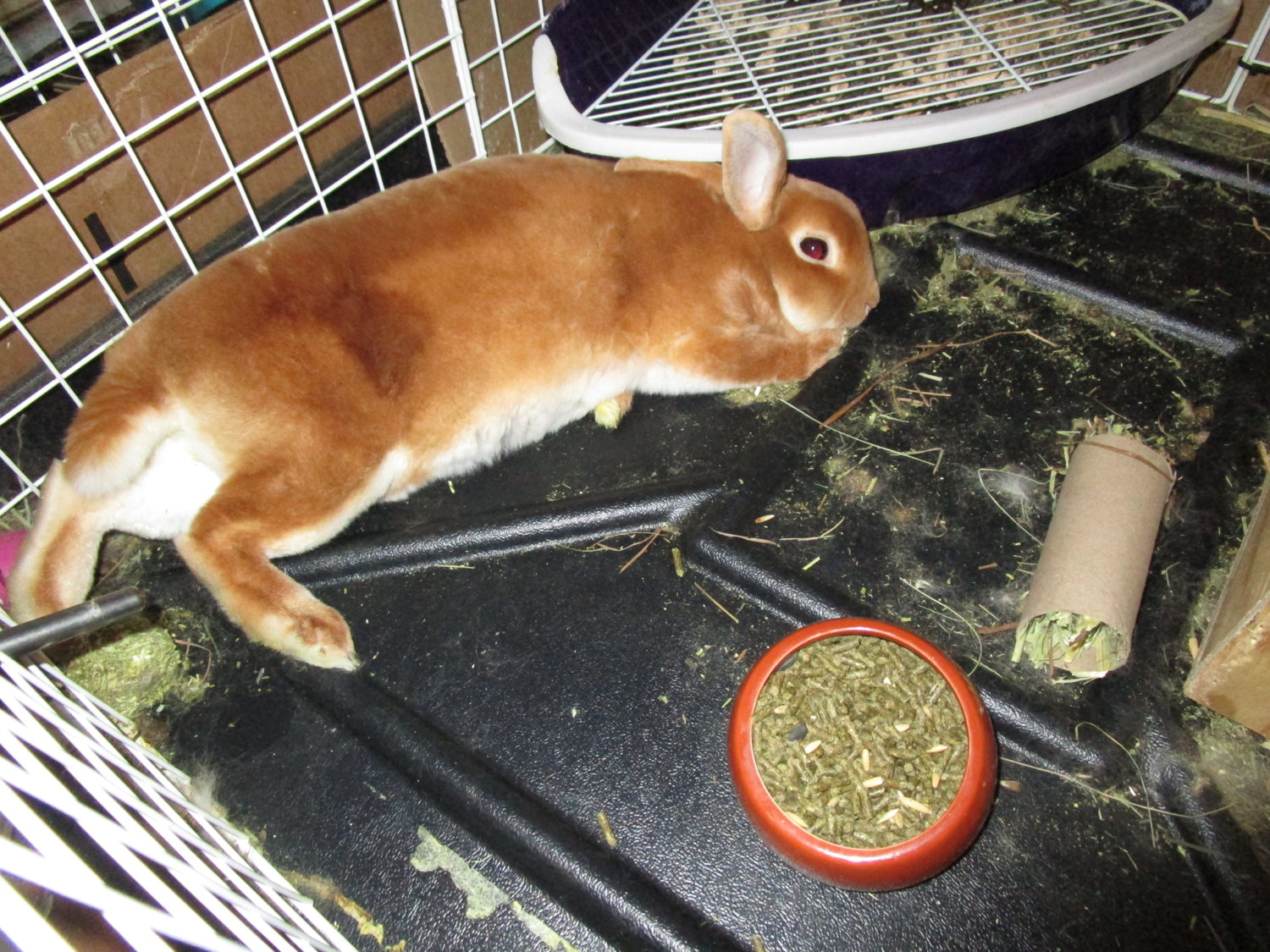 This is the baby in Apple's nest box. I tried to get some pictures later of Rhubarb's nest, but the camera got an attitude, so I had to stop and tinker with it. 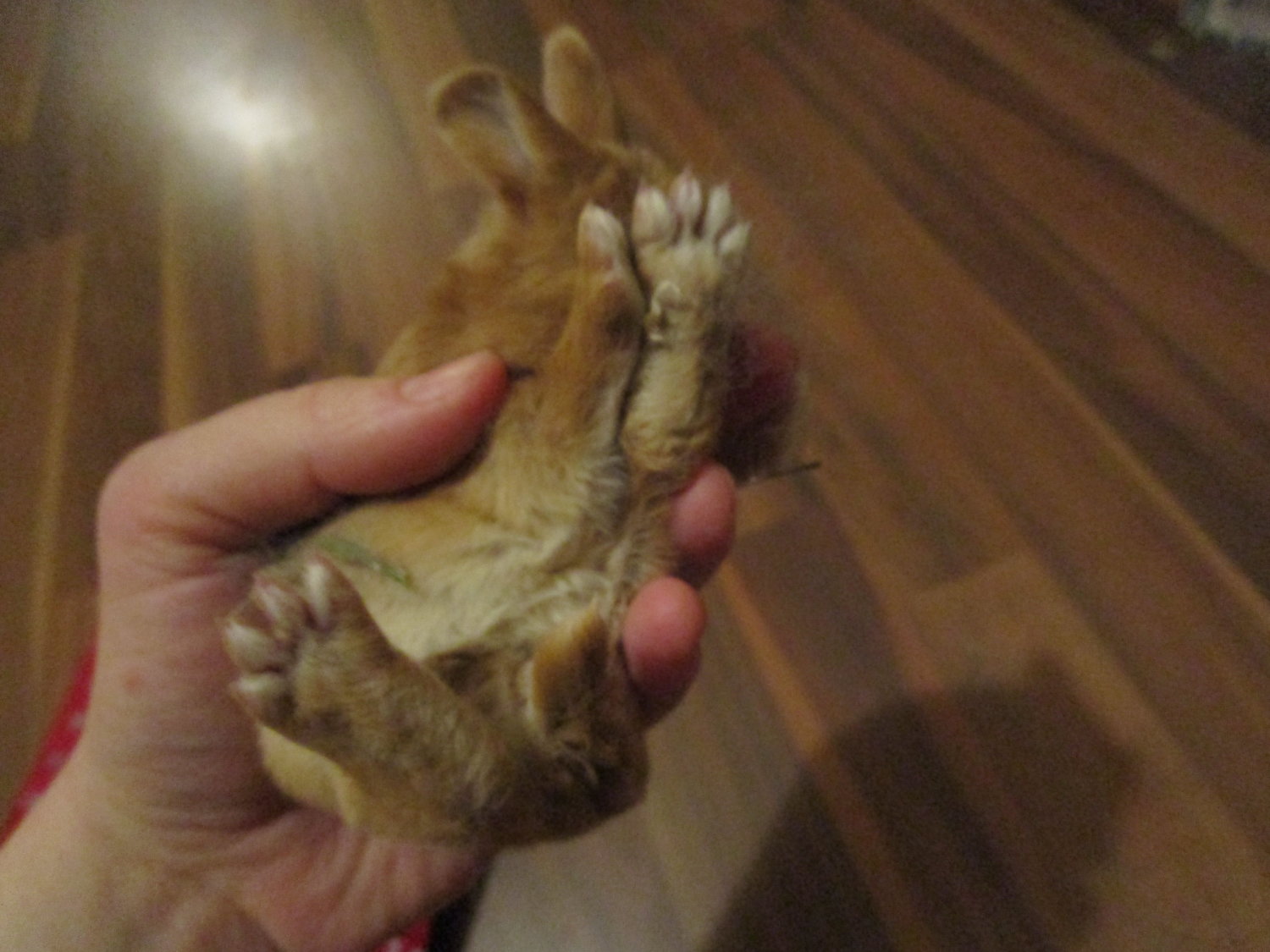 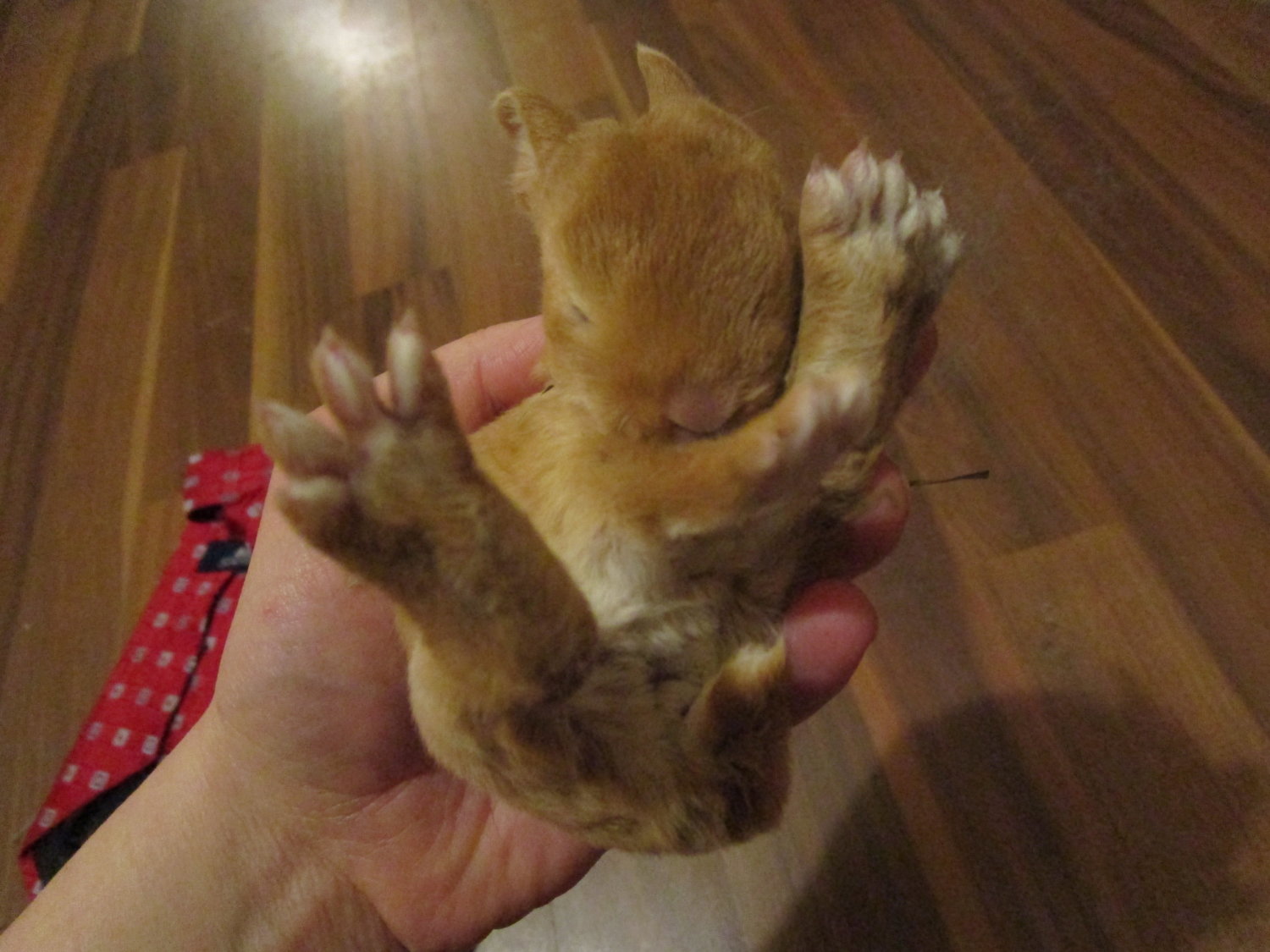 He's not quite as fat as I'd like, but he's squeaking by. He's also helping Apple's baby avoid single-baby-rabbit-looks-like-a-hippo syndrome. Yes, that is so a thing.

I might have more pictures on my blog, I don't remember, but I don't have time to sort through re-post them all here either way, so I guess you can look if you want. My hands have been causing me pain when I use the computer or really do anything, but I got the important ones here!