Goat barn. We want the $30 spy cams back in the barn so I can check goats from my bed on my phone. Wifi is step one.
He also wouldn't mind working outside occasionally...but not in the same pasture as the goats. They're not good programmers.

I thought about this a little more. So the shop where I milk IS actually becoming Mark's bike shop too. It was also wified yesterday. The quail are being evicted to my Dad, who was thrilled to have them and we will get eggs from until i can get a coop. Mark is building a bike from scratch out of tubes right now and is just about finished. He's wanted to start doing it for years (see, all that space was good for something!) The flies and manure pans in there make it a really unpleasant spot for me, him, and any goat kids I have in there.

Today upon inspection I discovered that there are giant crabgrass seedlings coming up all over the pasture despite it being dry, which is GREAT because a big part of the mix I broadcast seeded was red river crabgrass. Yay, SOMETHING is growing! Apparently I can grow crabgrass!

DH read up on fescue and goats last night and now he wants me to kill and reseed the rest of it around the barn. Odd that he would have an opinion, but now I don't feel like a stinker for what I've done.

The last pregnant doe is in a pen stall loosing her ligaments. Then we will be done. Next year I think I may go ahead and sync the does and get them done in Jan or Feb. The flies right now are too much and prolonged kidding and bottle feeding is not my favorite. Plus, it's getting hot and that makes kids grow slower.

Kidding season is officially over. Buck doe twins for Daisy. Yes, DH wants me to sync the does next year. We've also discussed direction for our breeding programs.
One of my kids has been having trouble with anxiety at night and causing everyone else to go down a quality of life bracket or two and if "_____ ain't happy, ain't nobody happy" and it's not mamma because mamma's moods have never been very good at controlling anything. We've decided to formally cut the dwarves because when we're miserable, me going out and milking little tiny goats with attitude that make around a quart per milking as "great!" milkers and milk that nobody likes but me does not make sense (some exceed that for a while). I'd rather milk big, calm, sweet does that make upwards of half a gallon per milking with nice long teats and good size orifices and don't have an attitude while suffering through the fun ____ is putting us through over the course of his childhood over and over again. So for family reasons I'm selling off my dwarves, this time for real.
A buck or two might stay to make minis for small FF's. I'm also wanting to keep my mini saanen and her doe because they are quite impressive and lack the characteristics of dwarves, but we'll see. If I decide against her I think I know a breeder that will want her and her moon spotted daughter in a heartbeat.
So Molly has sold, my AGSxADGA doelings have sold, the two AGS does have sold, new guy Winston has sold pending disease screening results, Oberon has sold pending disease testing results, Dignity and shy doe called Daisy are sold pending pickup now that Daisy has freshened. That leaves me with the two Eri daughters and the Daisy daughter that was born last night to be sold. I guess I'll fill out their registration paperwork and hope they sell. Antonio is still listed...if he doesn't sell he'll be one of my mini makers with "Mirikoza Little Bean" and the red buckling born last night.

It's easier on my hands anyway. And it's not really an ending. It's more of a beginning of being able to focus on what I really enjoy, you know, in between being so sleep deprived I can't think and all. Dwarves are a show, pet, and ornamental breed anyway, I've had drilled into me over and over again over the course of this whole thing. I can try to make them milkers with the few other people that are doing it too, but it won't be fun. Plus, dwarf breeders are weird, up tight, and tend to be snobby. I don't have time for that.
M

Dwarves are cute...BUT...if I am spending time milking, make it worthwhile! Only full sized here.

. I'd rather find "something to do" with excess milk than only get a 1/2 pint for my time and $$. You've made a good choice.

Sorry that you are going through family drama. It only takes one person in the family to go off track to take everybody else along for the miserable ride. Hope it gets worked out.

Baymule said:
Sorry that you are going through family drama. It only takes one person in the family to go off track to take everybody else along for the miserable ride. Hope it gets worked out.
Click to expand...

Thank you, that's the truth.

Let's play a new game. Let's play, "2 day old nigerian goats with neurological signs and refusal to eat". So my fb buddies are saying it's goat polio. What do you think? They get episodes of this and are head pressing, walking in circles...it's great.

Last litter of nigierans.
I may make this it's own thread. 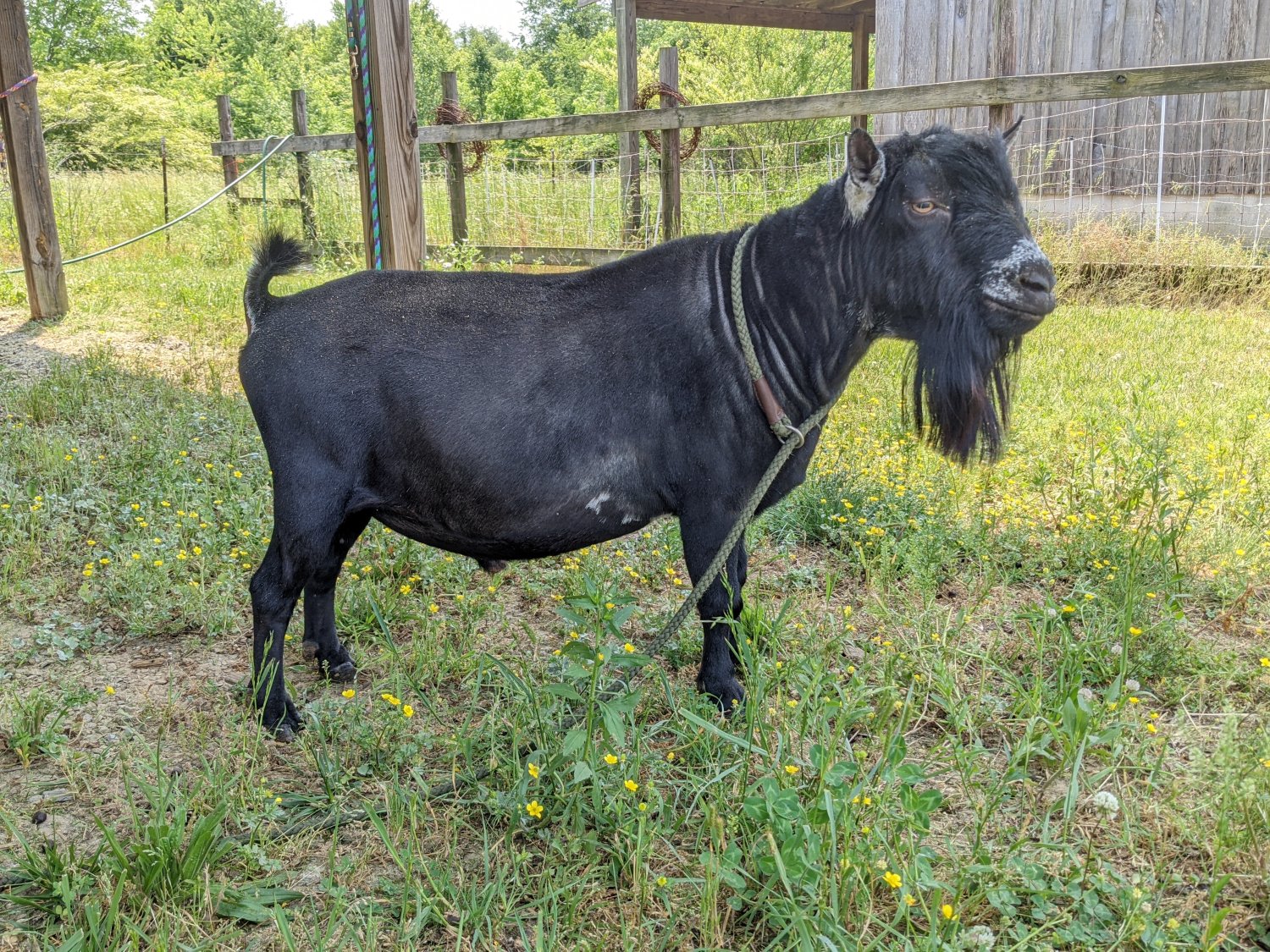 Mr. Oberon is un-sold. His uphill stance puts him at least an inch over height for an ND. Oh well, fantastic udders, great body capacity, high production...sounds like a great mini making buck.

My two ND kids in question have begun recovering again. Idk what that was, but it took a lot of shots and tube feeding to get through. Disbudding should be done for them Monday or Tuesday, then I am done.

I'm thinking of bringing in a Saanen doeling next spring. The husband and kids likes the milk of our mini so much... probably means we will be more serious about making minis or getting into the tank as I've heard scary things about saanen bucks. They aren't cuddly, marshmallow lamancha bucks or tiny menace Nigerians.

I'm thinking that if I'm going to be trying to breed F1 minis of anything due to prior experience with ND bucks being too short to get tab A into slot B for kid making, I may want to get a sheep AV and do some fresh AI's for it. Over height is still very short.
M

My Saanen buck, Romeo, was a lover! Not mean, came when called. He was, however, the best and most determined fence climber I have EVER had.

. That is why I sold that big boy. He loved people

. Not all climb...when he went over the cattle panel, I was done. I had tried hot wire but, had box too close and he learned to unplug it. Caught him! But I love my Saanen girls!.

As to height differences in breeding....with my mini horses I used a ramp. Hand bred with mare tied and stallion on lead line. They learned real fast. Of course, not the pee thing but. Otherwise very similar....only takes a pallet with a cut out to back doe into. Heck, a shallow hole and pile of dirt works.

. Even walk doe into a narrow alley first.....you get the picture.