Baymule said:
Will Dan be out there doing the milking?
Click to expand...

Dan loves to milk, but school gets in the way. We'll see. I wouldn't be surprised.

160 bales of orchard came in today and are in cover under the milk shop wing. We'll get another 140 in before we are done getting grass hay. Sometime after frost when they're done cutting our alfalfa person will bring us a load for the camper port. Then we will be ready to rest the pasture for winter (which won't be occurring until November here, and I always forget October, but who needs October anyway?)

310 bales of alfalfa came in today. Still waiting for my grass hay producer to finish rolling his hay to bring the other trailer with the 140 (so he can have the rest of the cash I took out for the hay, right?). But we are ready for winter with or without it. The rest is frosting on the cake.

Today's high is 84, low is 60. Not very wintery or even fally-ish, but the brief coolness is welcome. Our first frost date is usually the last week in October on average. I wonder if we'll make it.

Apparently the kids I breed are winning their classes in shows in their areas and more than a few new owners are very happy with them. I guess I don't totally botch up breeding.

It's a mellow day today. The almost two year old baby randomly decided to spike a fever of at least 103 last night in the wee hours of the morning. He doesn't act sick and I'm sure he'll be fine, but it kind of takes the gas out of your tank the next day. 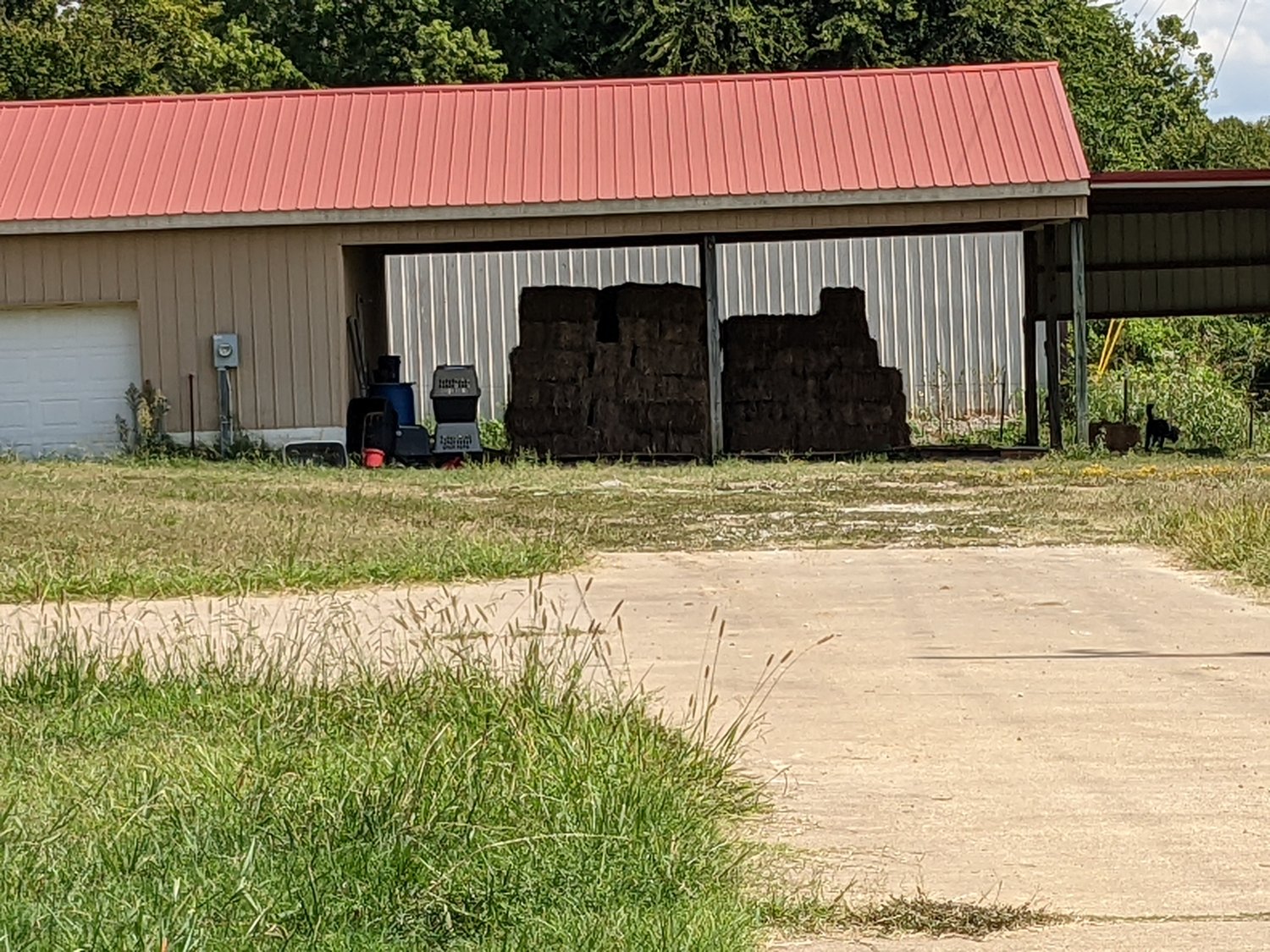 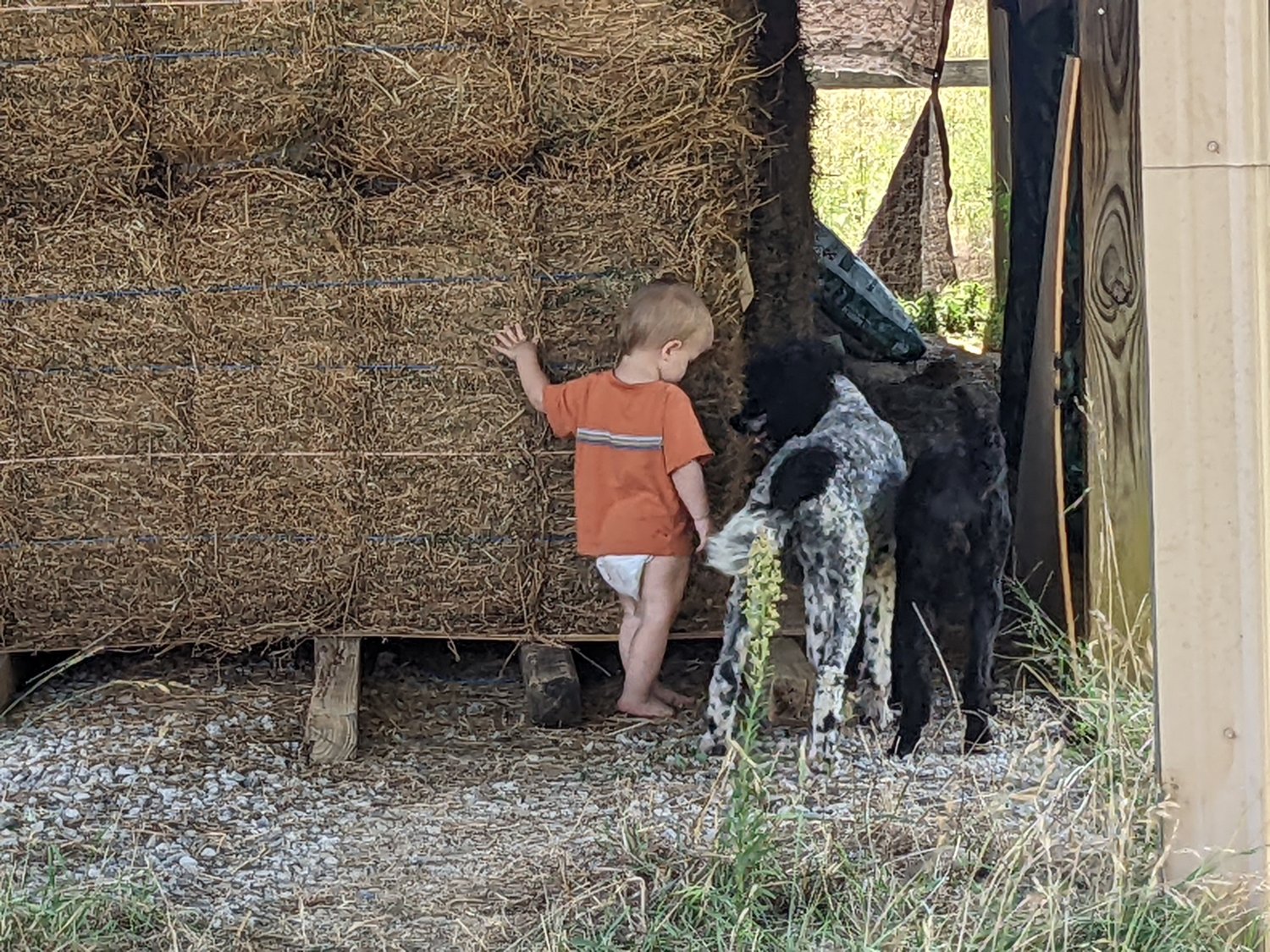 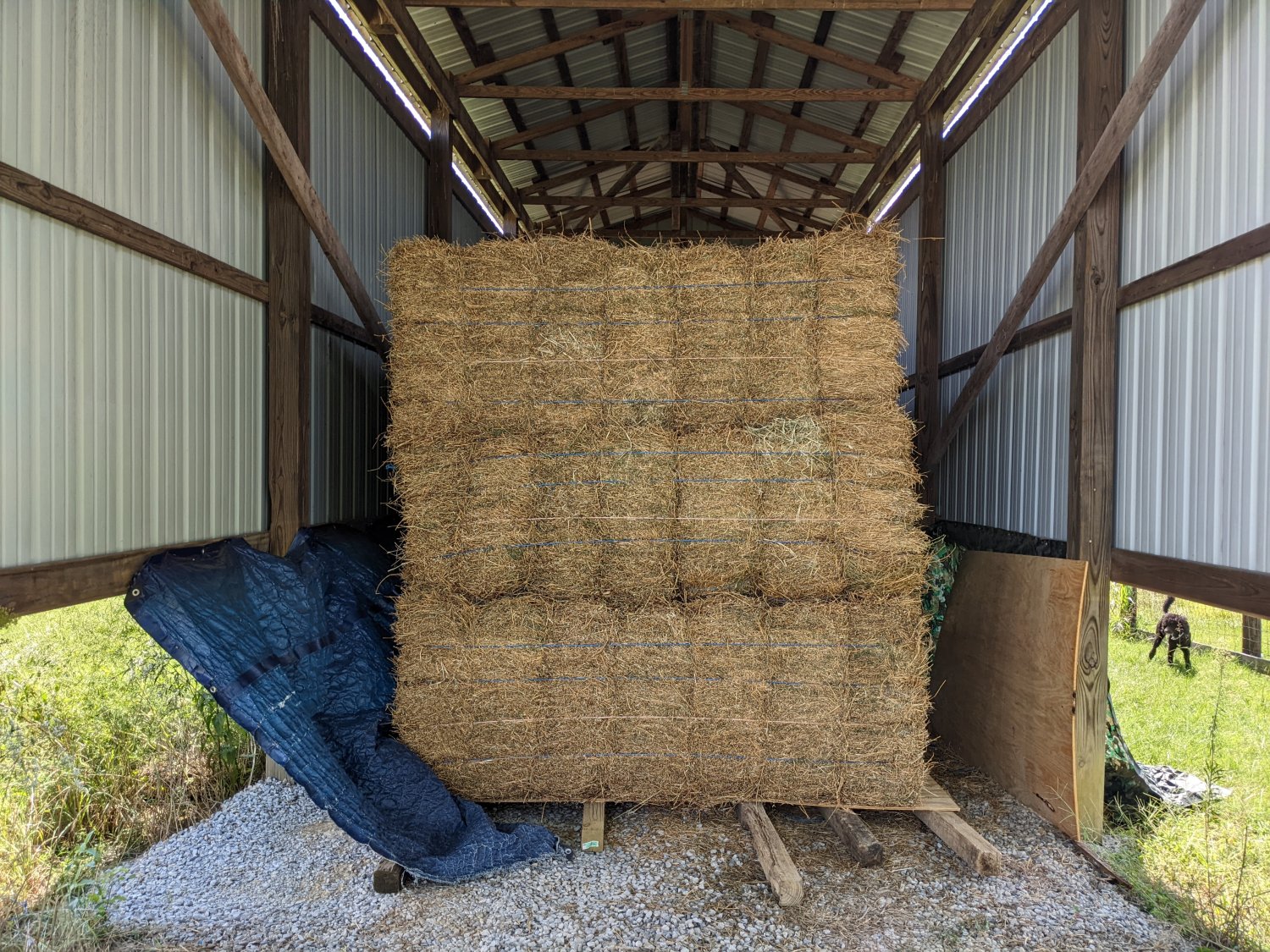 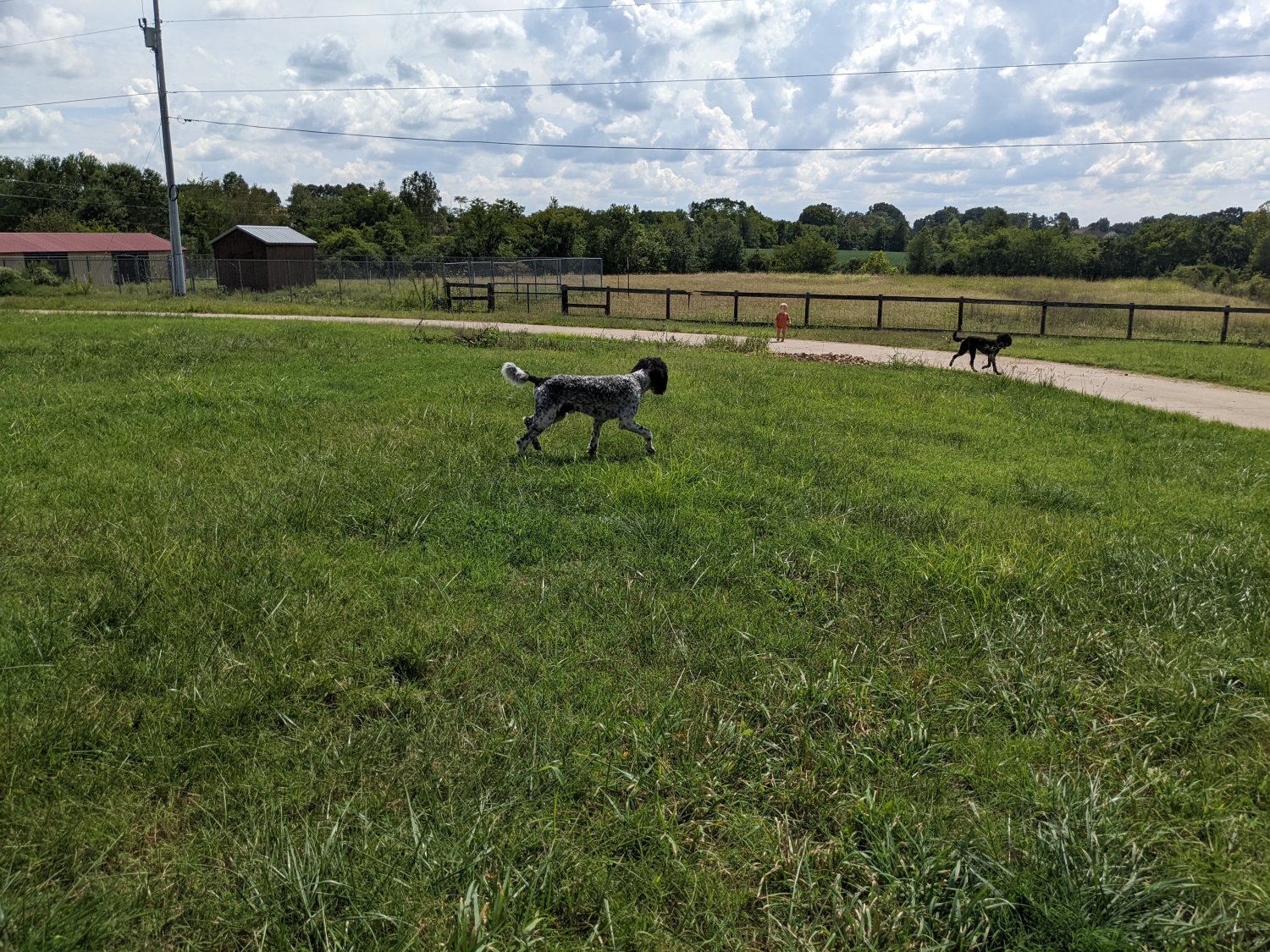 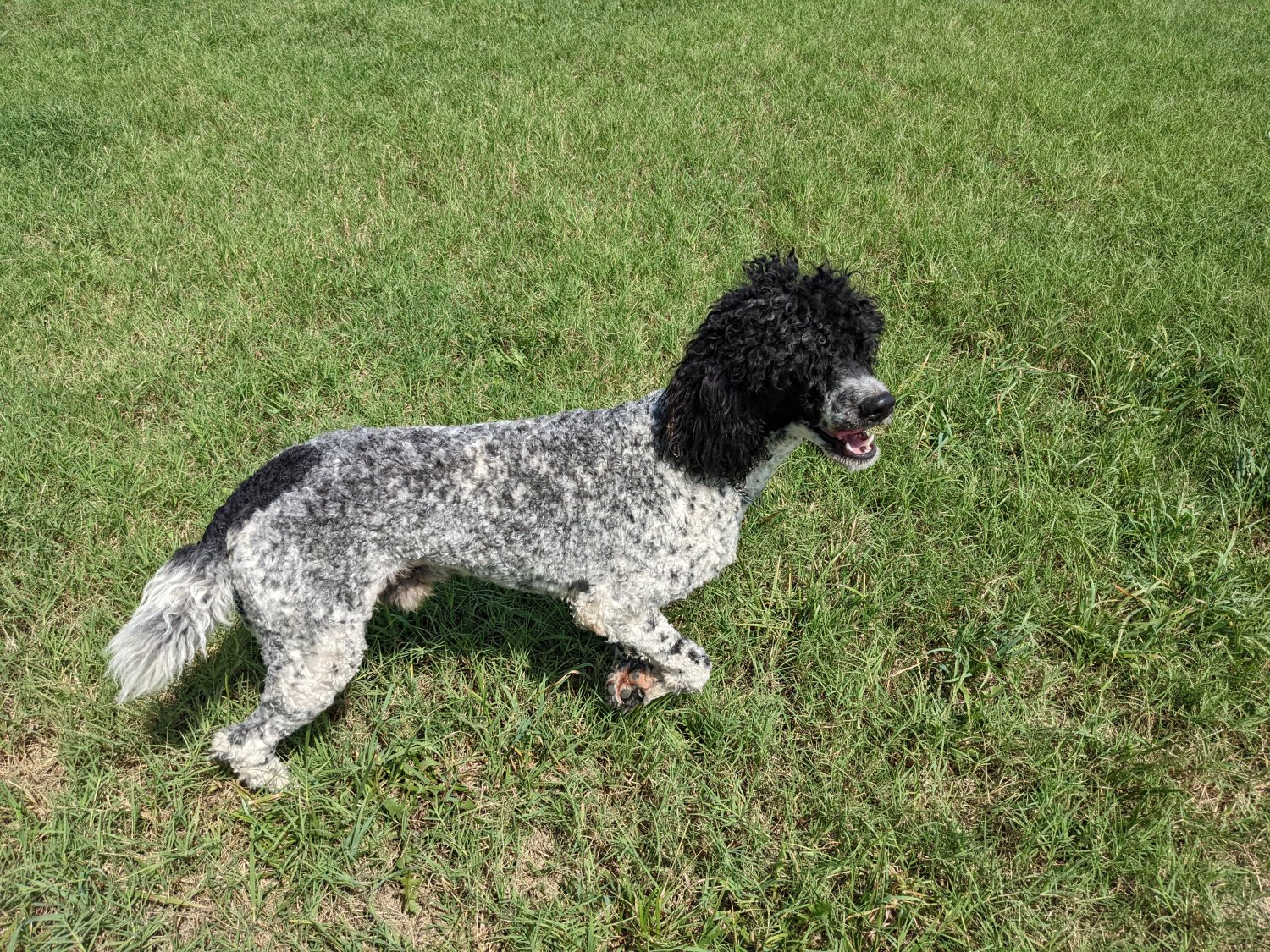 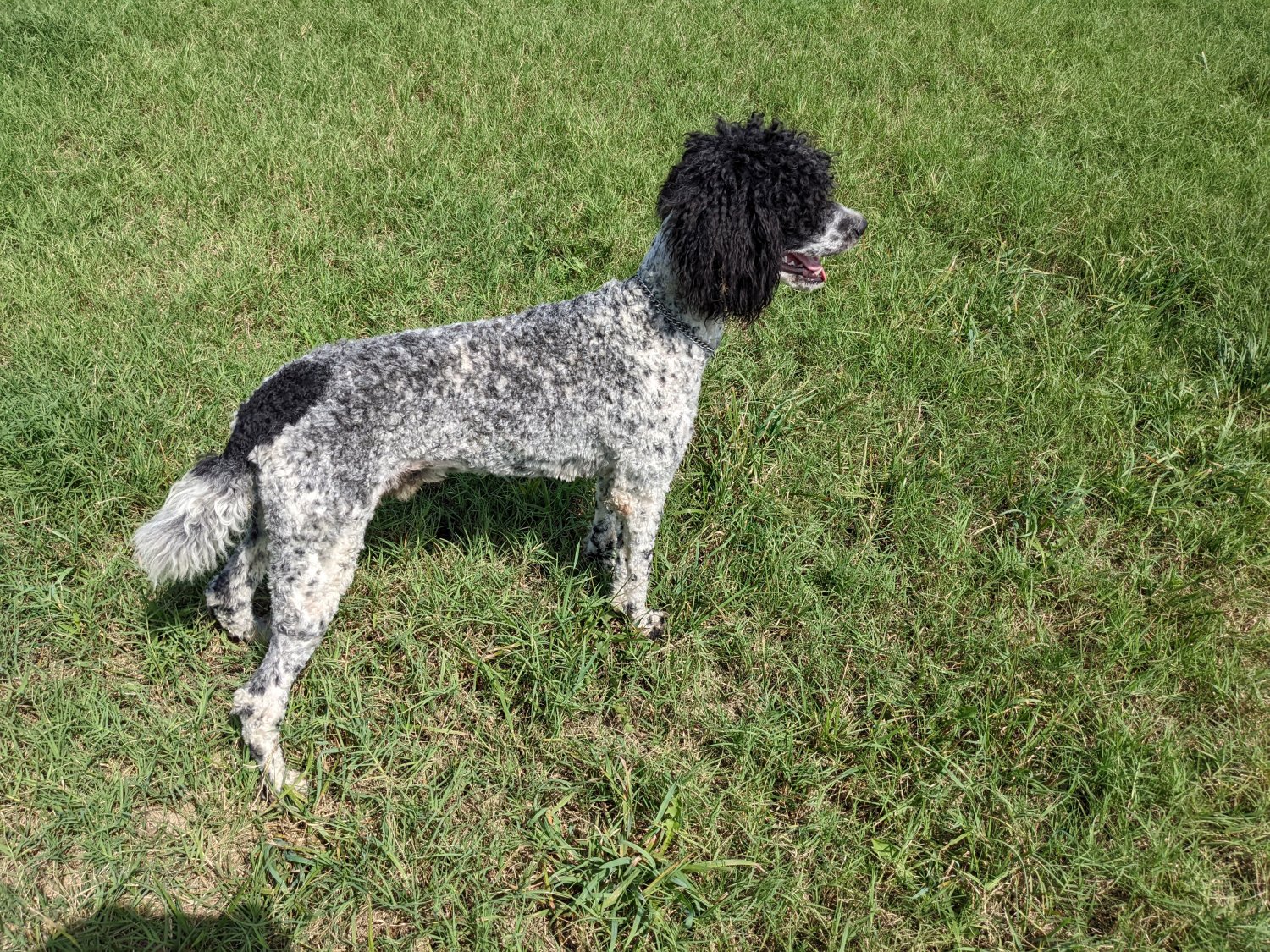 Still struggling to get good photos of Ms Millie the black abstract poodle other than the above.
F

Early this morning while DS#1 was keeping us awake from 1 am to 5 as is his stupid habit, Riker started quiet barking incessently. Being totally fried as I was (darn son is making this a regular thing) I ignored it. Riker also barks all night at his food bowl if you feed him in the evening and it's something he doesn't think he likes.
This morning after dropping the kids off at school at 6:30 am I came home and caught Riker escorting two piglets back to the hog pen. Which is not right. So i come over to the fence and what do I see (other than a piglet grunt, grunt, grunting up to the fence to say, "hi,feed me). This is what I see. 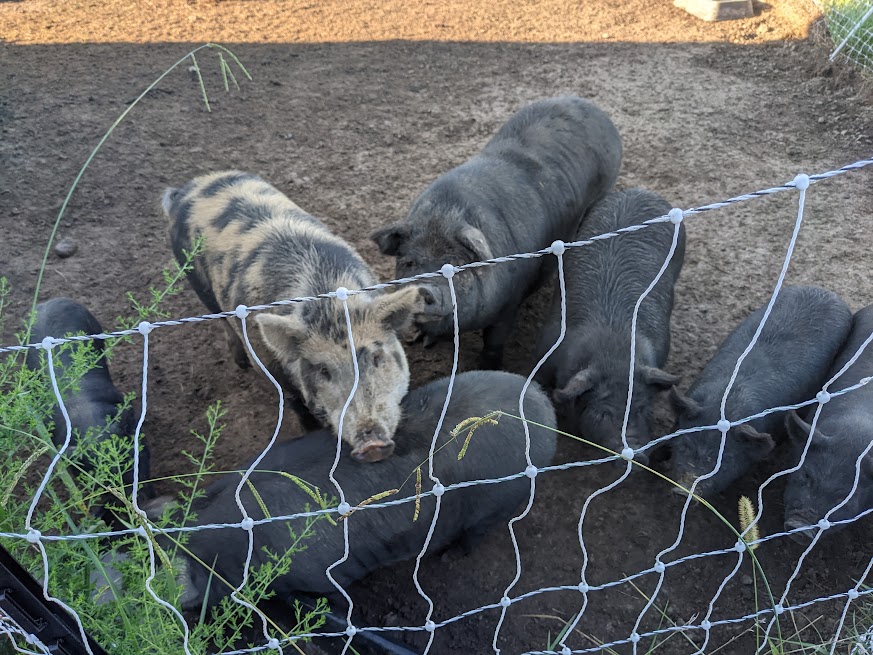 This is a problem. As the sow is not in heat, so Mr. Nasty Not Kune Boar felt he needed to breed SOMETHING so he was molesting all the piglets through the electro net, out of the pen, upsetting Riker, but they really wanted to be in, so they'd come back, so they'd go back under. I've let the pen get weedy, which doesn't help, but they still oink and squeak when they touch it. Mr. Nasty is still trying to nurse, btw, but the sow is dry. She's raised two small litters, one not being hers, so her body decided she was done. I also think the piglets I brought in lost interest.

So after putting away the goats I turn off the fence, pull a few posts, and call my good pigs out from under it. They needed a little grain to come more than half way out. This is the barrow. He still does not like me for some reason. I can't imagine why. He may also not be pure AGH because his face is also long and narrow and his build is longer, taller, and lighter. He will be a dinner pigger. Someday. There was a lot of Mr. nasty pig smacking and poking with a step in post. Apparently he really wants to get me and is willing to stomp and chompf, and charge me though the fence so he got hit with a purple plastic post a bunch of times. He will be dispatched as soon as the flies are gone. Right now he's not afraid of me. Just of the post. Apparently I need to kick him in the balls again (we've had "words" before).

I did the "trail of pig food" thing and got them in the goats old pen. I tripped over them a lot on the way. The guinea hogs seem to like people, and back scratches, and maybe like tripping you, I'm not sure. I guess I need a new setup for the goats for when frost comes and turns the johnson grass toxic with cyanide.
This is before I got the barrow in. 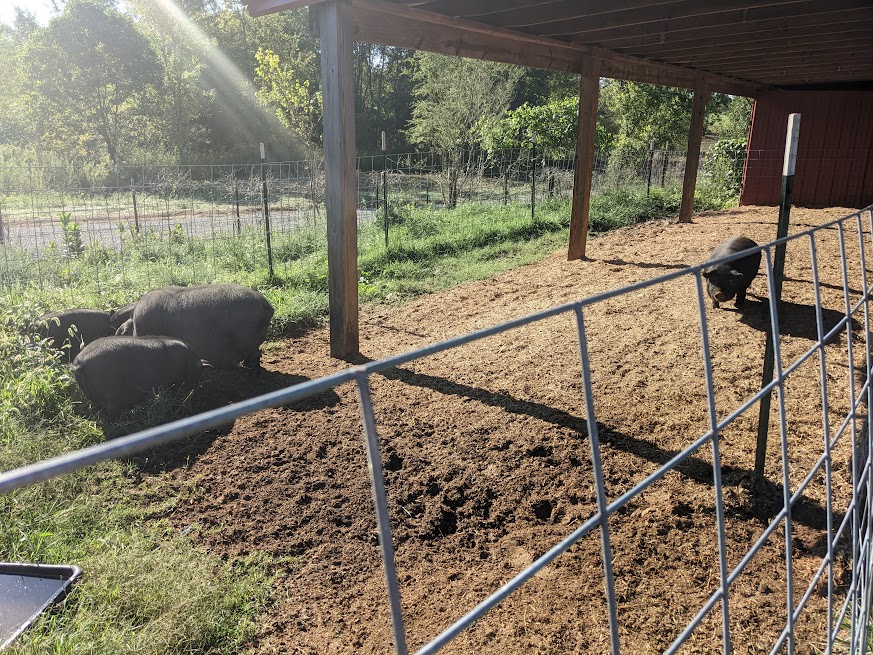 Meanwhile, Mr. Surly Nasty Boar got some pen work done to his pen. I took off half of it, cleaned the net, moved the netting inward so it's on bare ground, and made it ripping hot again.
I wish I could have castrated this pig when he was younger, but he had retained testicles until he was over 100lbs. There was nothing to cut. 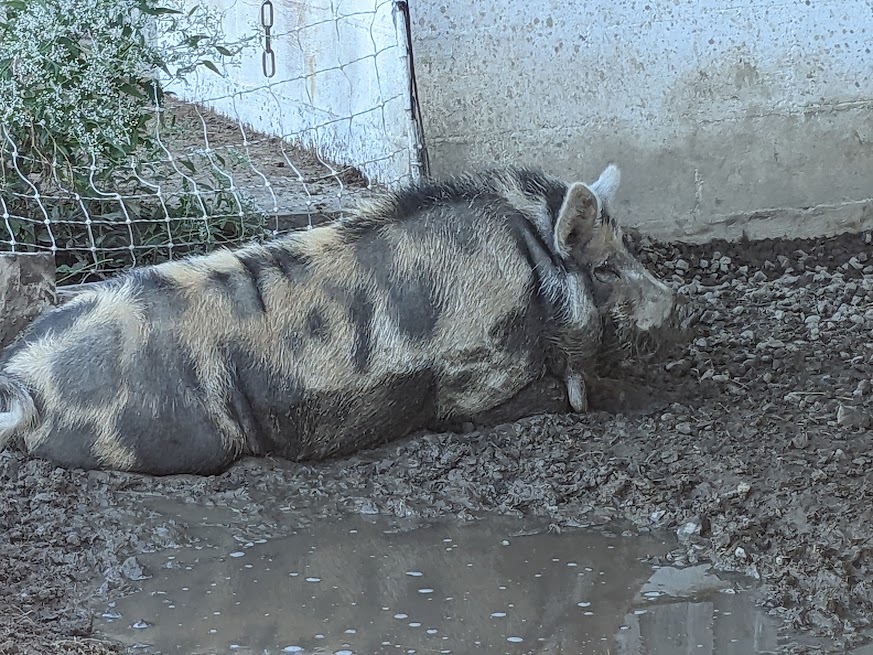 Mr. McNasty getting ready to get shocked. 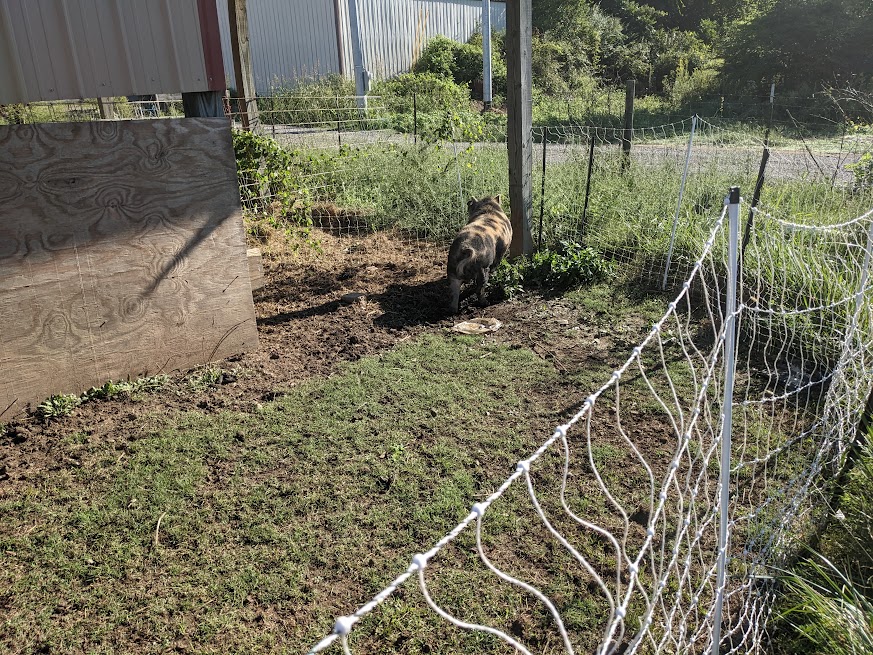