@Baymule Thanks... I am OK... though this one is certainly taking a bigger toll than most. I had a few tears posting those pics earlier today. But I have her genetics in all of my kids so I still have a bunch of her, just mixed in with some other lovely genes as well.
All 5 kids from last year are her grandbabies and here are this years... I am only supposed to keep the doe and 1 buck.... But I want 2....

The more I look at Naty, the more I think I need to keep him!!!!

This is Summer Crush 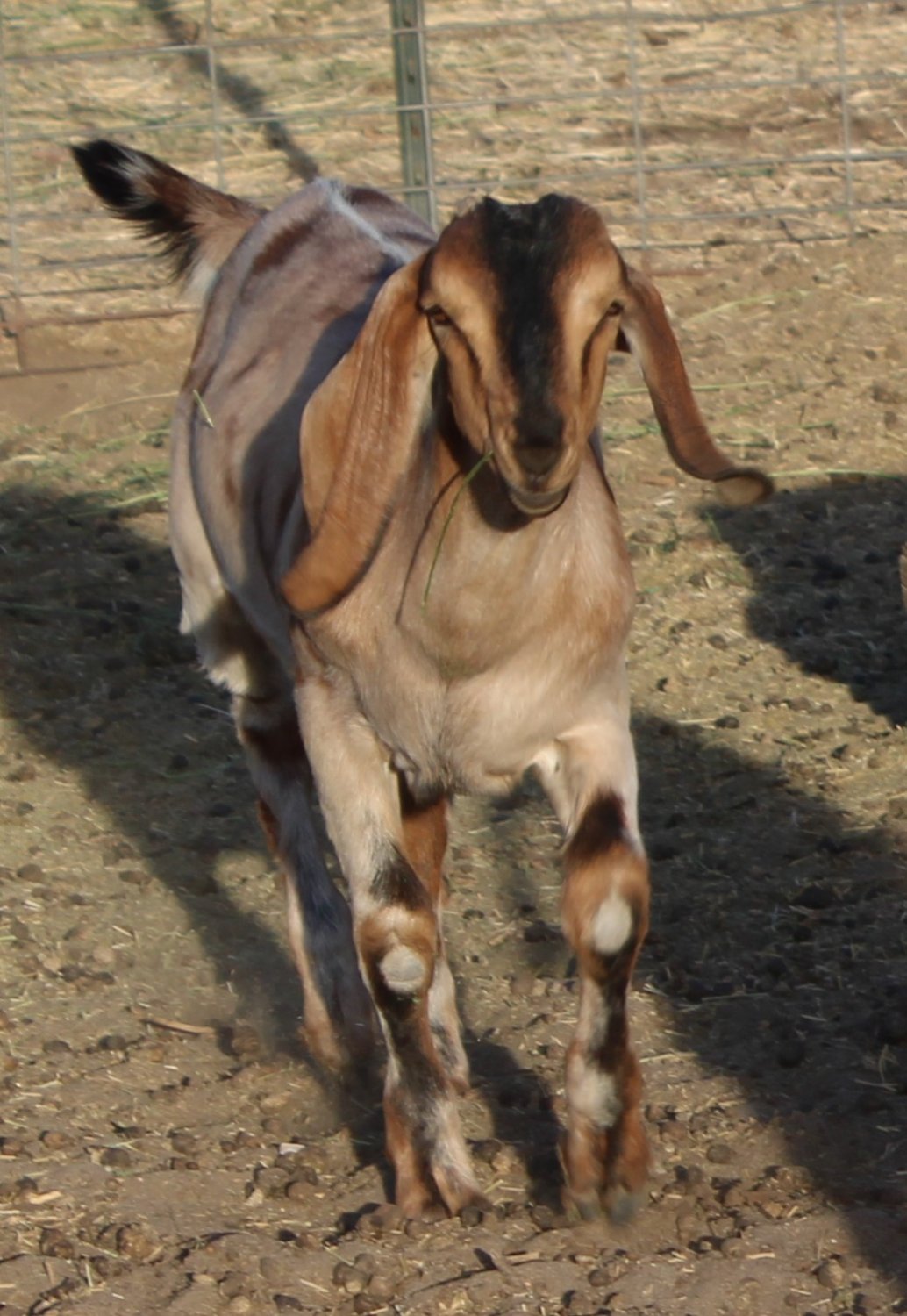 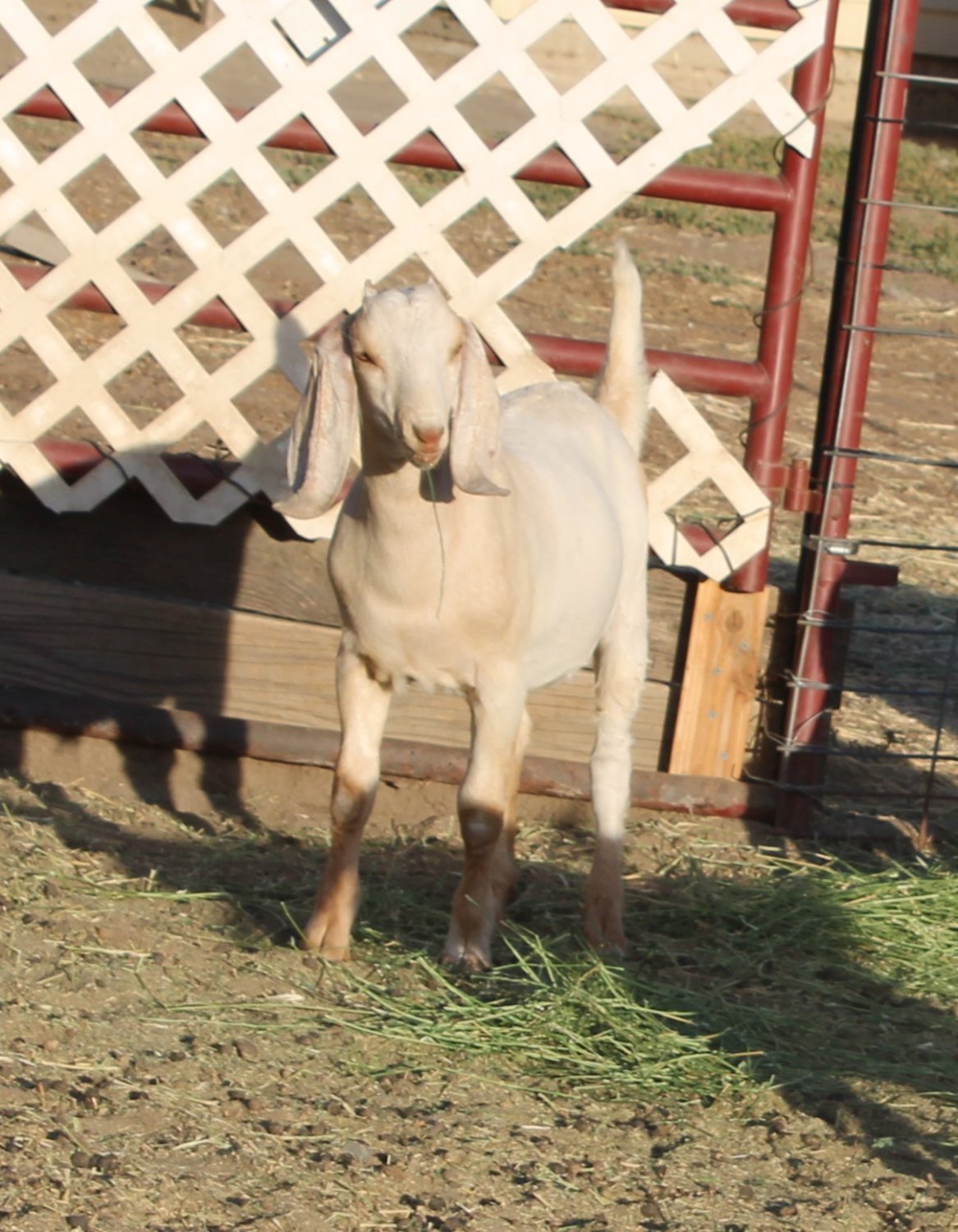 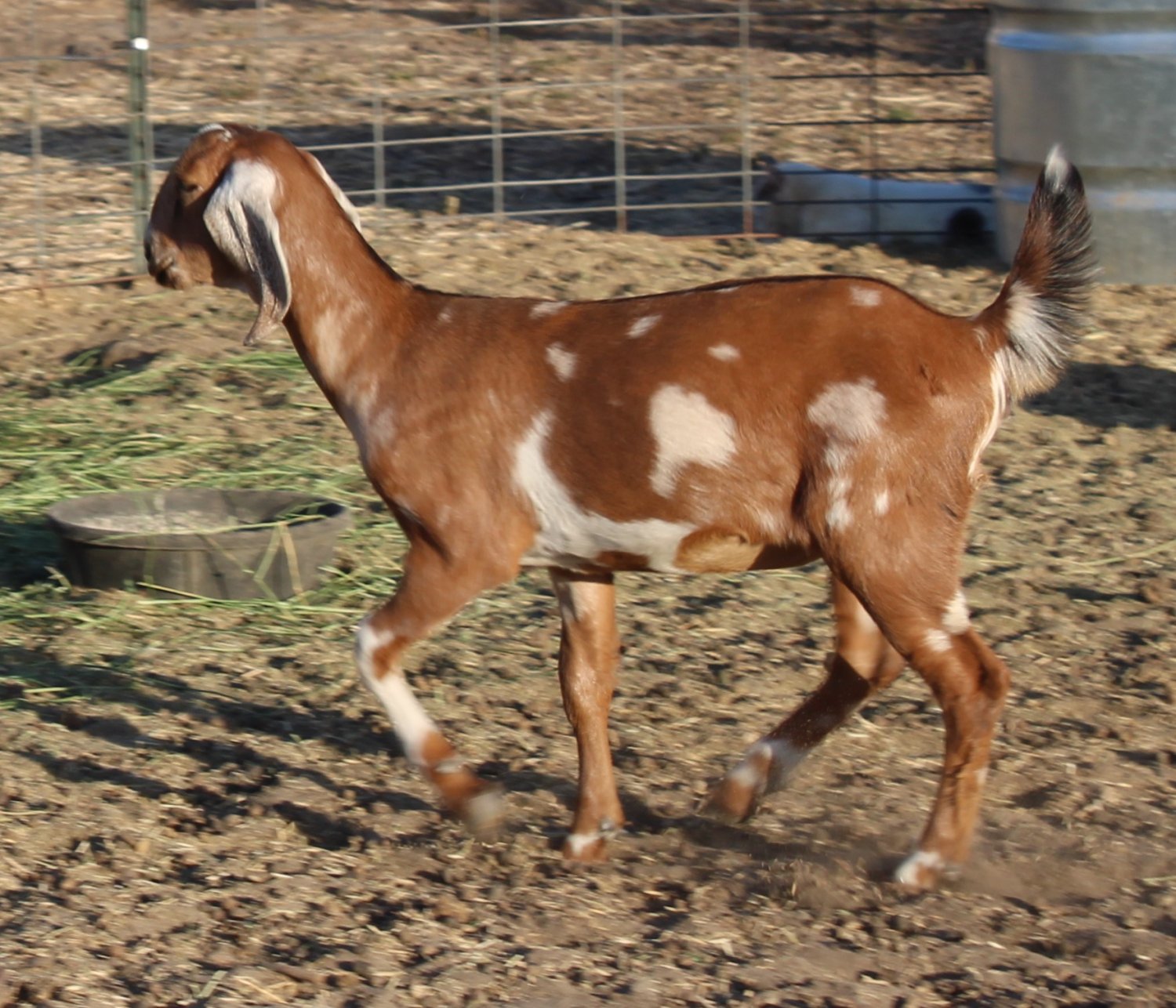 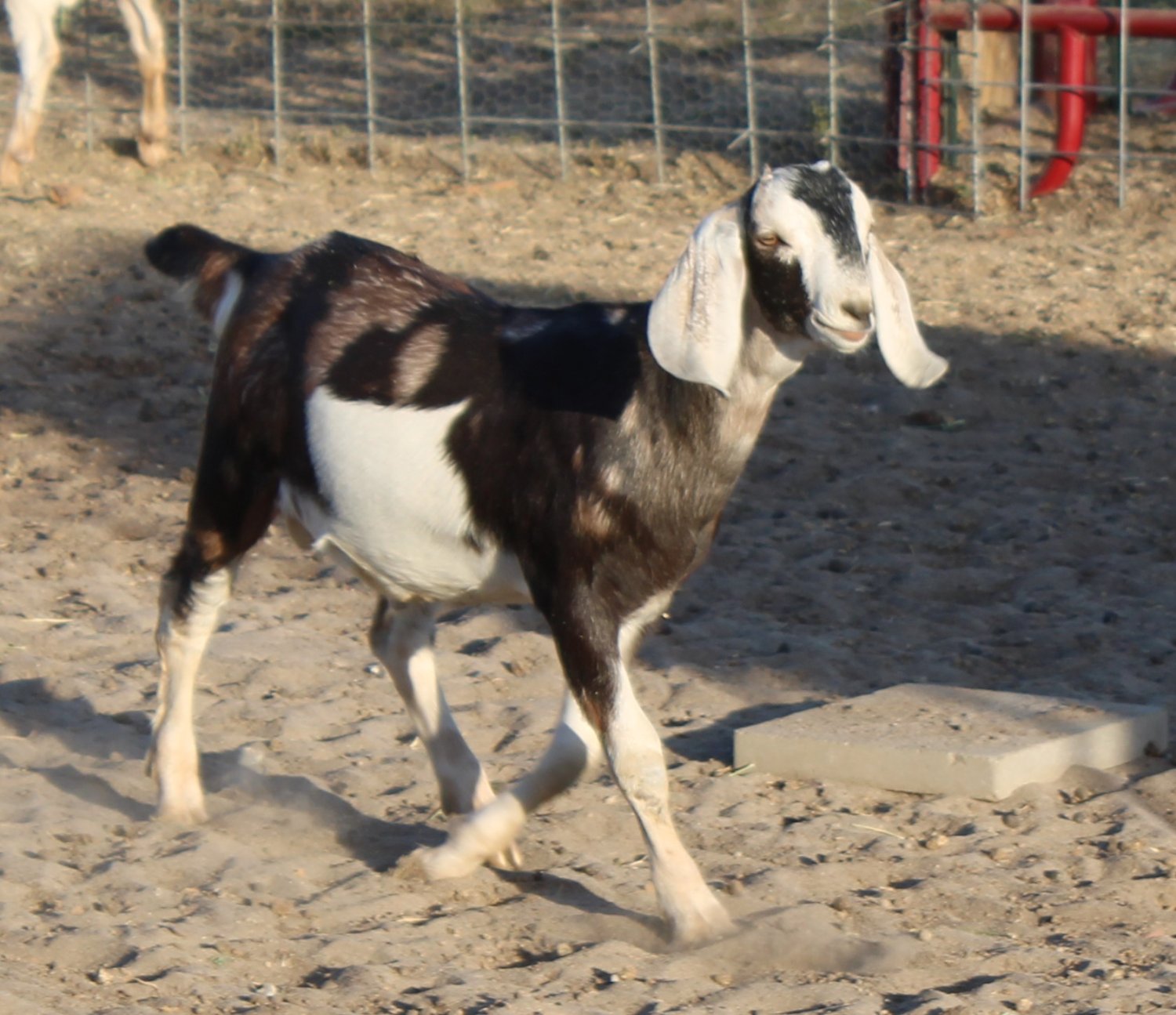 I had a good day full of distractions, went to the Cherry Auction (swap meet), for the first time with a handful of my coworkers. Taste tested something called Tostilocos. It was chips, cucumber, jicama, mango, peanuts, pickled pork rinds and a spicy sauce over the top. Different. Then J and I shared some nachos. Temps are in the hundreds this time of year so we didnt stay too long. I barely remembered that our local fair was going on this weekend so a friend and I went and walked around.... man I miss that place! All the memories of my kids and I running around all hectic when they were showing.... Good times, Great times actually!

We came home and sat on the porch catching up for a bit as we havent talked in a few years. When I brought the dogs out Karma immediately scolded him (probably for being on her property without her permission) but after a thorough frisking, she settled down and seemed to approve. Until he went to leave. I escorted him out the gate to the driveway so the dogs wouldnt rush out. When he hugged me goodbye, Karma made it clear she DID NOT approve and told him to step away in no uncertain terms.... I said 'well I guess you can see why I dont have a love life..... That is a 106.5# opinion with teeth right there!!! '

I was mostly kidding... but i guess I do have a built in excuse if I ever need it.... Sorry Karma disapproves, I simply can not see you anymore! Ill know that Karmas always got my back!!! 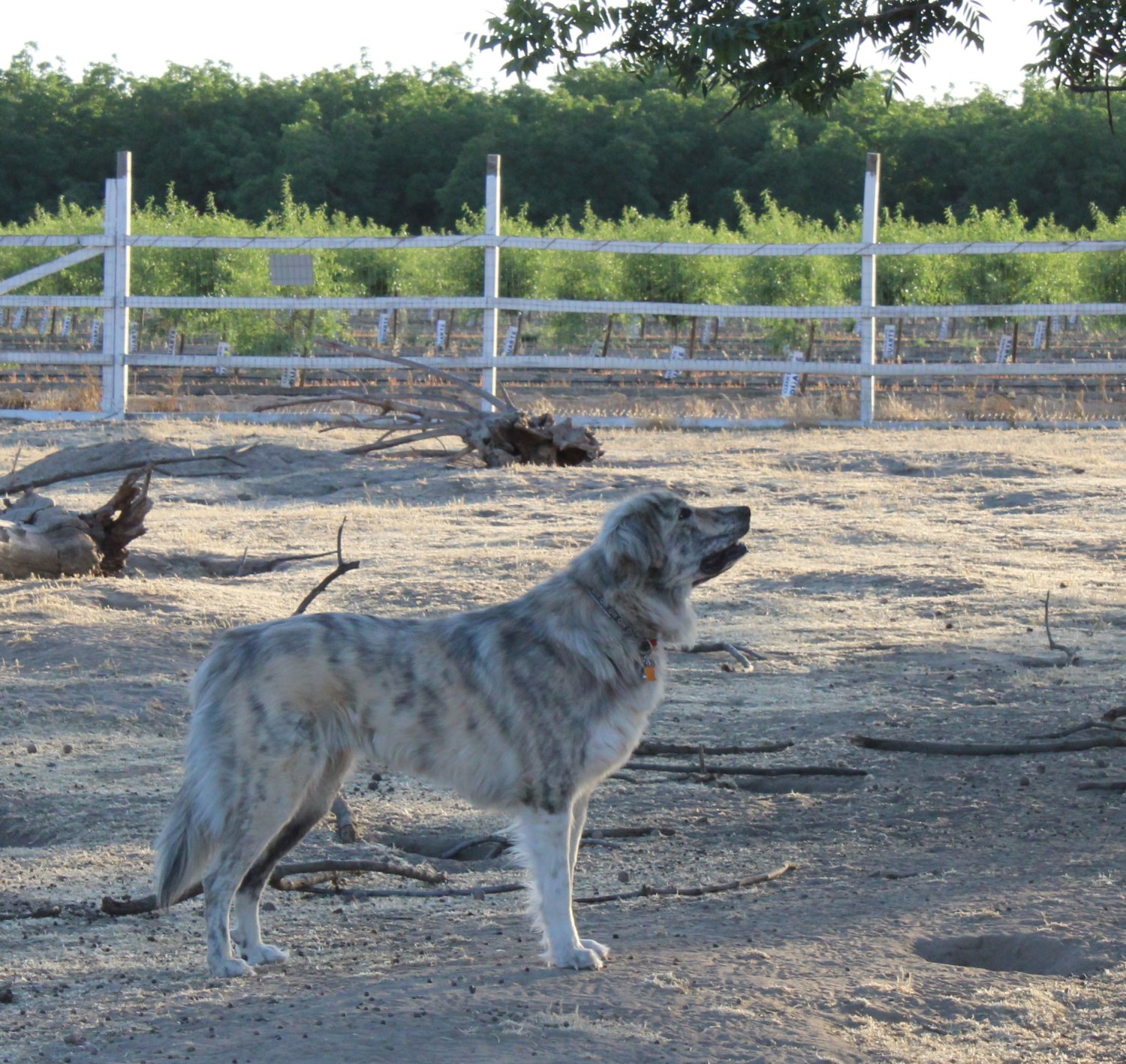 I lost my Miranda when I moved. We were loading the trailer and she slipped on a patch of ice. She broke her leg. We loaded her in a neighbors truck with a camper and rushed her to the vet. Her leg was shattered, bins poked through the skin. Vet said he could do surgery, put in a pin, it would take months for her to heal-if she ever did. She could get an infection, it would be a long and painful, miserable experience and he did not recommend it. I would have done anything to save her, would have paid anything to save her, but I couldn’t do that to her. The vet put her down. She was one of the first sheep we bought. I have 5 of her daughters and 3 of her granddaughters. Miranda still lives.

Another pity party!!! Kind of. We are toasting with the real stuff though cause it is actually a good thing. My last child has officially flown the nest. The tears started on my way home from work because I knew he would be gone when I got here. I love my kids and I miss them. Because of them, I havent been alone in 27 years. But we are toasting the launch of 4 compassionate, caring, loyal, wonderful humans.... and the fact that I survived having 4 teenagers at the same time and they all turned out to be good, productive members of society. They love each other and like to come home to visit me and the animals so I guess I did a few things right. I never looked forward to this day, but I am glad they are all out there healthy, happy and brave enough to do their own things. Tonight when I go out feed the animals and stop to look at the stars, the song, "somewhere out there" is going to be playing in my mind and I will be thinking of my kids. Right now i am feeling all the sadness.... I know Ill be fine, but for now, this is the pity party Im having.

Yes, if we do our job right, our baby birds spread their wings and fly away. We raised them to be productive members of society. We are proud of them, but sure do miss them. You just go on and have your pity party.

@Bruce not really. About 4 hours away. He said it might be temporary, but its just a temporary till DD gets her house purchase finalized, then the plan is to move there and rent a room from DD and her hubs.

But Ill be too busy for pity parties here in a second. I start my second job tomorrow. Without the extra help here, I need to increase my income, so it is a bit of a lifestyle change for me too.... I am actually working in the place DS just left, told his manager I needed the job and we knew a spot just opened up.... so there I go.

Good thing Im (almost) still a spring chicken right??? I might not rise before the butt crack of dawn, but Ill be working til long after the cows and goats and cats all come home! And they may as well have dinner cooked, laundry washed and floors vacuumed.... since Im paying all the bills, they can at least cover the housework!!! Sheesh!

Wait a minute... I dont have any cows yet.... dag nabbit! Anyone got a mini jersey I can buy? The whole 'til the cows come home' bit doesnt really work without cows i guess.

If you hear the door slam about 45 minutes after you get home, that will be your butt finally dragging in.

Soooo... fast food didnt work out for me. Still looking for another job.

Meanwhile at my regular job, cue the following conversation:

If you pop my earlobe, I swear I WILL bring spiders!

Person 2: (who had been sneaking around popping unsuspecting coworkers earlobes) .... Spiders?!?!? uhhhh... ok....

All other persons in the area:

You get one guess as to which one of those was me. LOL!!! (I am the one with an unlimited access to an ungodly amount of spiders in case you needed a clue!!!

Update on the rest of my stupid life:

Someone spent their whole saturday in the ER for stitches on their hand due to a really bad bite from her damn 'pet' squirrel. Extremely low risk of Rabies of course, but still have to watch him for 10 days just in case. He is being pretty aggressive last night and after being normal for his breakfast was acting aggressive again after the dogs walked by his cage. Not sure if he is just really traumatized from yesterdays fight (CAUSE I AM!!!) but now I am stressed over this whole bunch stupidness. He has been indoors exclusively for 3 months, no bats in the house or fleas/mites since I treated him for parasites when I first brought him in as a bottle baby orphan so no exposure after I got him and squirrels are apparently very low risk for getting it anyways. But yeah.... So now there is that. I moved his cage in case he thought the dogs were teasing him, Karmas tail would rub his cage when she stands on the top step cause she is just so big and he had started pulling her tail hair out when he could reach it. I had been considering trying to find somewhere to release him since he is technically a 'wild animal' and he should be able to fend for himself... but he was still so young so I was hesitant. Now I gotta wait either way.

In other annoying news, I had someone contact me about a nubian buck kid. Cool. Except she was only interested in the gold and white kid that I had finally decided to keep and pulled his add a few weeks ago. I was instead offering the 2 beautifully moonspotted boys. My white dude is nice and wide and i really want to solidify that into my lines. My prices this year are much lower than last year due to consideration for the economy, I know we are all paying a crazy fortune for hay and feed right now. But I figured, I still have tons of these genes plus neither of his parents are leaving my farm for any reason other than my own funeral. The buck is Fancies and the doe is Blue Moon, my favorite. So I told her his price, and being generous I kept it the same as the other 2 I have advertised. She countered that she wasnt comfortable paying that much for an unproven buck kid and wanted to pay $100 less. I had already let her know that I really didnt want to sell him..... SOOOO that was the end of that. Seriously!!!! If I convince a breeder to sell me their one keeper kid and they offer it to me at THE SAME PRICE as the others they are advertising... I just trip over myself thanking them and fetch my goat before they change their mind!!!!

Have I mentioned the baby geese???? I was feeling sad and depressyish.... so I bought myself some new babies to stay busy. They are the buff breed since there arent many sebastopol breeders in my area and I am down to only 2 Sebbies. And of course, now one of the bigger babies is limping/walking goofy... SIGH!!!! Ill try to bandage him here soon, was supposed to do that yesterday before I ended up in the ER. Anyways, when my buddy T was here, I was telling him about how they are out of geese from Holderread's and Metzer farms and HE ACTUALLY KNEW WHO I WAS TALKING ABOUT!!! I felt sooo heard!!! Someone that understands me in my very specific obsessions!! We ended up talking until past 1 in the morning when Moonshine finally hollered from the back yard to remind me that I forgot to feed and milk her at 10 pm!!!!

Jiminy christmas, I need some help... ALL Kinds.