Ringo has Moved to TEXAS

Ringo loves tomatoes. None of the other sheep want any, they sniff, but back away. I’ve even touched a slice of tomato on their lips and I get the sheep equivalent of EEEEWWWWW!!!! But not Ringo. He is glad the girls don’t like tomatoes, it’s more for him. My tomato crop has left a lot to be desired this year. I finally got ripe tomatoes a month ago. They aren’t real good quality this late, from heat and stink bugs. I cut up some and put in the freezer. There was a bowl of trimmings, so I took some to Ringo. I intended to give some to the chickens but I got ambushed by a big goofy ram.

Get away! It’s MINE! I had some orange tomatoes. Ringo looks like he raided the Cheetos on the chips aisle at the grocery store. Ninja Ringo escaping his pasture and sneaking into the Cheetos truck while the driver is inside making a delivery. 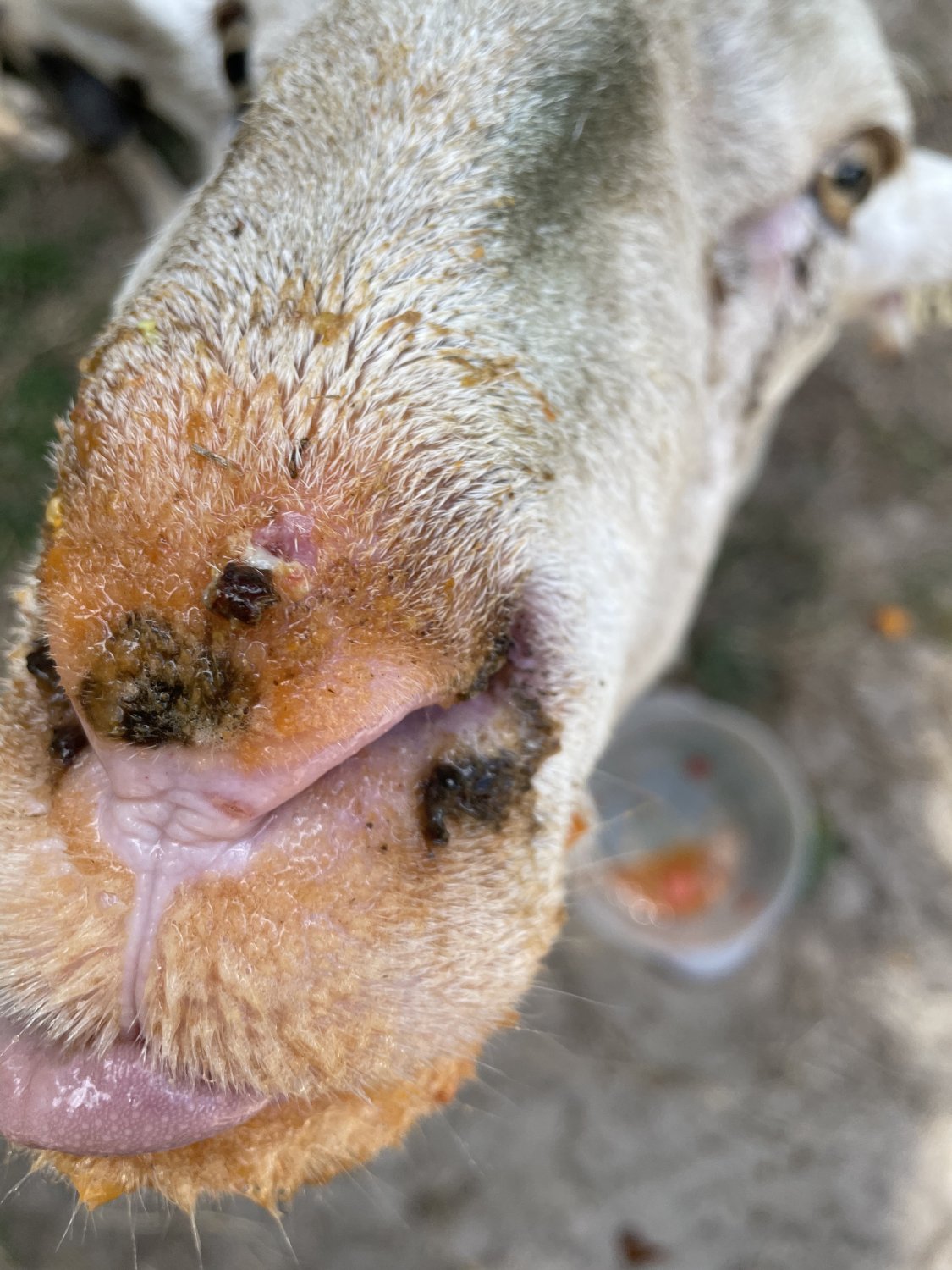 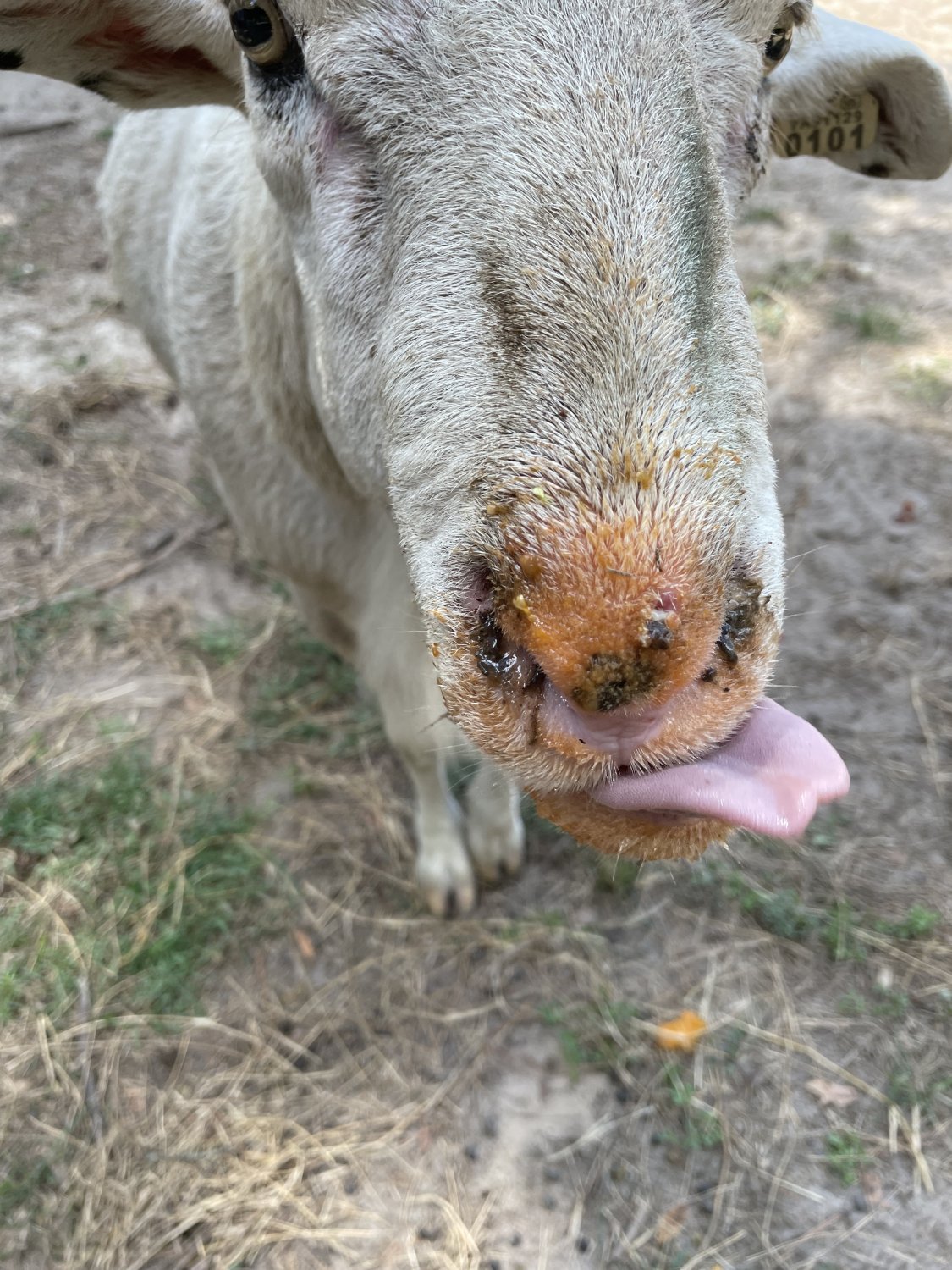 Ringo didn’t let any of they yummy juice get away either. He slurped it up. Ok Mom, the bowl is empty. You can have it back now. Of all of the things I gave him I never tried tomatoes.

Ringo! Stop romancing the BRED ewes and look to your right at the lovely young ladies for your manly pleasure! Stop licking your lips over the fat pregnant ladies and go pay attention to the young ladies! I would show this to Cooper but it might make him mad since the only sniffing he is getting to do is with Pete.

Ringo must have listened. But the giddy young ladies looked uneasy at this old man sniffing their lady parts and departed. Ringo said what the heck this hay is pretty darn good! I wouldn’t let him eat the phone. 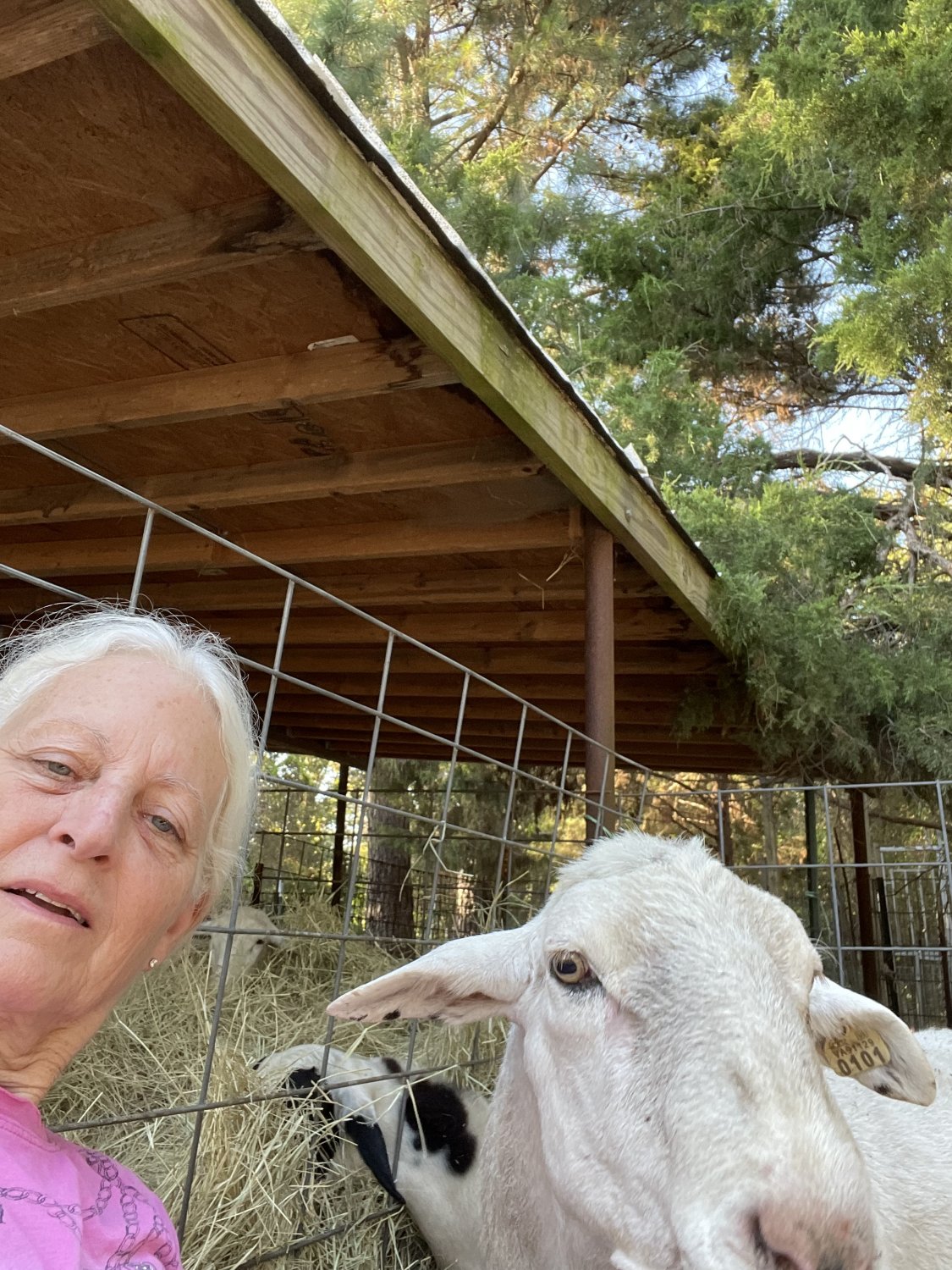 So he started trying to position my knee and leg……. Uh no Ringo. I thought he might be scratching his head, but he went to pawing and rumbling. Goofy boy! Then he checked out Rose. I think he’ll be making babies before too long. But of course there is my wildly attractive knee……. Here he comes again…. No Ringo, the ewes, the ewes! He’s getting lots of ear rubs. I think he’d be a lap baby if he could.

We had quite a scare this past weekend. We were gone Friday afternoon to pick up our granddaughters and didn't get back until 10 PM. Our neighbor Robert called and asked what I was doing, I told him we were trying to find our way out of Brenham and his phone call took the map off my phone! Later! Bless him, he realized it would be very late when we got home, so he came over and fed all the animals for us. He called later to tell me that he did that, we were very appreciative. He said Ringo didn't eat. That didn't sound good at all. We got home, I carried two sleeping little girls to bed, BJ unloaded the car, and I went out to check on Ringo. He seemed ok, came to me for petting as usual.

The next day, on Saturday, Ringo was in the front of the pasture, away from the ewes and he was down. I got him up, he was stiff legged and didn't want to move. I offered him some feed, he politely lipped at it, then turned his head. He wouldn't drink and just wanted to lay back down. I drenched him with Karo syrup and water. I called @Mike CHS and Teresa. We went down the list of possibilities and came up with nothing. Maybe old age was catching up with him. Teresa suggested Nutri-Drench so I went to TSC and got some, came home and drenched him with that. I mixed up some sugar-salt water, 1/2 teaspoon salt with 3 teaspoons sugar and drenched him with that 3 times. Our 5 year old granddaughter helped me by holding the container. She loves Ringo and wanted to help make him well.

Ringo pooped. Celebration! He peed for what seemed forever, 3 minutes! I was thinking, there goes his kidneys. Not a happy thought. Between playing with grandkids, checking on Ringo, the 14 year old baking cakes that overflowed the pans and covered the oven with cake batter vomit, smoking up the kitchen, Robert bringing his daughter, family and friends over to see the farm and me hoping the kitchen didn't catch fire and worried sick over Ringo, I was busy.

Turned off the oven. Turned on the vent-a-hood fan. Laughed at the 14 year old who put a whole cake mix in a half cake mix pan, then put another whole cake mix in a half cake mix pan. Duh. It's on the box, Read the instructions! Went to town and got more cake mix. 14 year old and her friend made another cake. 5 year old and I kept a close eye on Ringo. He seemed better that evening, I called Teresa and gave her and Mike an update. I gave him 1ml of Magnesium Citrate. I thought if he had a blockage, it might make things move along. I gave him another dose Sunday morning.

Sunday was pretty much the same. Drench with Nutri-Drench, drench with homemade electrolyte solution. Repeat. Get him up, make him walk. He seemed a little better. Talked with Mike and Teresa. They were glad that he was better but we all knew I might go out the next morning and find him dead. You just never know. When we have a sick or down animal, we do all we can and hope for the best. Sometimes our best isn't good enough.

Sunday evening he was waiting at the gate to be fed. He muscled his way in to the feed pan for his share. This was good! I took a picture and sent it to Teresa. They were overjoyed. I drenched him again.

Monday morning we had to leave by 8:30 to meet friends who used to be neighbors with our DD and family before they moved away. They wanted to see the girls and suggested breakfast. I got out early to take care of the animals, especially Ringo. He ate well again, I drenched him again with the Nutri-drench and homemade electrolyte solution. We left.

We got home at 7:30, just before dark. My first stop was Ringo. My boy was up, waiting at the gate and trash talking me, BAA! BAAAAA! BAA! he ate well again, I did not drench him. This morning I fed, did not drench him. I watched him drink the fresh cold water I brought him. I opened the gate to let him and the ewes graze the yard. I left it open so he could go back if he wanted, which he did in the heat of the day. This evening, my boy was back.

I enjoyed sitting in the chair, petting him and taking pictures of his antics, flirting with the ewes. He is so funny, he romances the girls, then comes to me for attention. He loves being loved.

I don't know what was wrong with my beloved Ringo, I thank God that he pulled through and is my boy again. We held our granddaughters hands and Papaw prayed for Ringo. Teresa prayed for Ringo. Our prayers were answered.
F

Maybe he got too much acid from the tomatoes that he likes and it threw his gut tract out of balance???? I'm grasping at straws..... Maybe one was a little "off" and it just made him sick??? and a sick sheep as we all know is often a dead sheep. But your drenching seems to have moved whatever was making him sick out of his system as it sounds like as time went on, it was purged and he got back to himself. So glad that he did come back around...
I am sure the prayers helped, but attention to detail and catching it quick was probably the primary reason it was not worse than it was.
Any chance he got something to eat while you were gone... a tree branch or something that may have gotten into his stomach and made him sick? Probably will never know.

Hope he is up to romancing the ladies now that he seems to be feeling better.

farmerjan said:
Maybe he got too much acid from the tomatoes that he likes and it threw his gut tract out of balance???? I'm grasping at straws..... Maybe one was a little "off" and it just made him sick??? and a sick sheep as we all know is often a dead sheep. But your drenching seems to have moved whatever was making him sick out of his system as it sounds like as time went on, it was purged and he got back to himself. So glad that he did come back around...
I am sure the prayers helped, but attention to detail and catching it quick was probably the primary reason it was not worse than it was.
Any chance he got something to eat while you were gone... a tree branch or something that may have gotten into his stomach and made him sick? Probably will never know.

Hope he is up to romancing the ladies now that he seems to be feeling better.
Click to expand...

We considered the tomatoes, but that should have shown up pretty quick, not 4 days later. Upset tummy usually presents itself darn near immediately. It could have, it could have thrown things off balance. It wasn't his first time to have tomatoes. But you can be sure he wont have another tomato feast. A few at a time and yes, he will have to share with the chickens. LOL

People have never stopped to poke stuff through the fence to feed the sheep. The dogs would bite their fingers off. LOL

There are oak, pine, American persimmon, elm and cedar trees in that pasture. All the sheep have eaten all the leaves and never got sick.

So I don't know. Impaction of some sort? I considered that and that's why I gave him the Magnesium Citrate. I figured if he did have a blockage, that ought to blow it out. LOL

Bottom line, I have no idea.

The funny thing is, he hasn't been "right" for a few months. Very slight, but just not right. Not anything I could put a finger on, more like something I could sense, just this feeling I had. I even told Mike I considered making him a yard pet. I put him with 6 ewes the first of April and they are bred, but scattered out. I know the heat affects things, but it wasn't hot this past spring. We got a lot of rain, it stayed cool until mid June. I put him with the 5 young ewes the last of August, he couldn't have cared less. Heat was most likely the factor. It's still hot, but this evening he was back to being his regular self. Hope he stays that way!
You must log in or register to reply here.
Share:
Reddit Pinterest Tumblr WhatsApp Email Share Link