We have 3 hives. 2 were Nucs we got from a local guy. We’ve lost our bees the last 2 winters so this summer when we got the new ones in a timely manner we decided to split one to increase our odds. Interesting enough, the hive we split has completely taken over the other two. We waited a month and the new hive did indeed have a new queen and was laying eggs and they were doing well. The 1st hive that wasn't’ split didn’t have as much honey as the middle hive (#2) that was split. Which I thought was interesting as it was the original colony and we didn't’ mess with it. We had a friend come out and look before we saw the queen (he’s the one who pointed her out to us) and we put an entrance reducer (metal screen) to reduce robbing because even though it was doing well we had been feeding it to supplement them and he said it’s better than taking a chance. 14 days later (life happens) there is virtually no honey in the 1st hive and almost zero bees in the 3rd hive. We had just been to our local bee keeping class and learned our entrance reducer was still too large. After studying our bee flight behavior they indeed were going back and forth to both hives and putting it in their own. We had to put a 3rd brood box on the #2 hive that was split because there were so many and put an entrance reducer on hive one and reduce hive 3s reducer to one bee width. My husband looked on line and found out putting a piece of glass over the bee entrance will confuse the robbing bees. The bees who live there will figure out how to get out. It’s basically a lean to piece of glass, the top leans against the hive with the bottom pushed out. Home bees can exit the hive and go left or right but the robbing bees - who apparently only want to fly in directly and not land on the landing platform get stumped. As soon as he put the piece of glass up there was a cloud of bees trying to get in and getting repelled by the glass and others circling erratically before they went back to their hive. Since we now know the problem is so critical to the health of both our hives we will probably shut up the newest since it’s still having a hard time defending. The other has a healthy enough population they should be fine. Hopefully. But i thought this was a little ingenious fix to stop robbing quickly. It’s not the end game, but it’s a good start!
Last edited: Aug 20, 2019

Here is the glass, it’s what we had on hand. The second picture shows how it’s angled. Figured these would help. 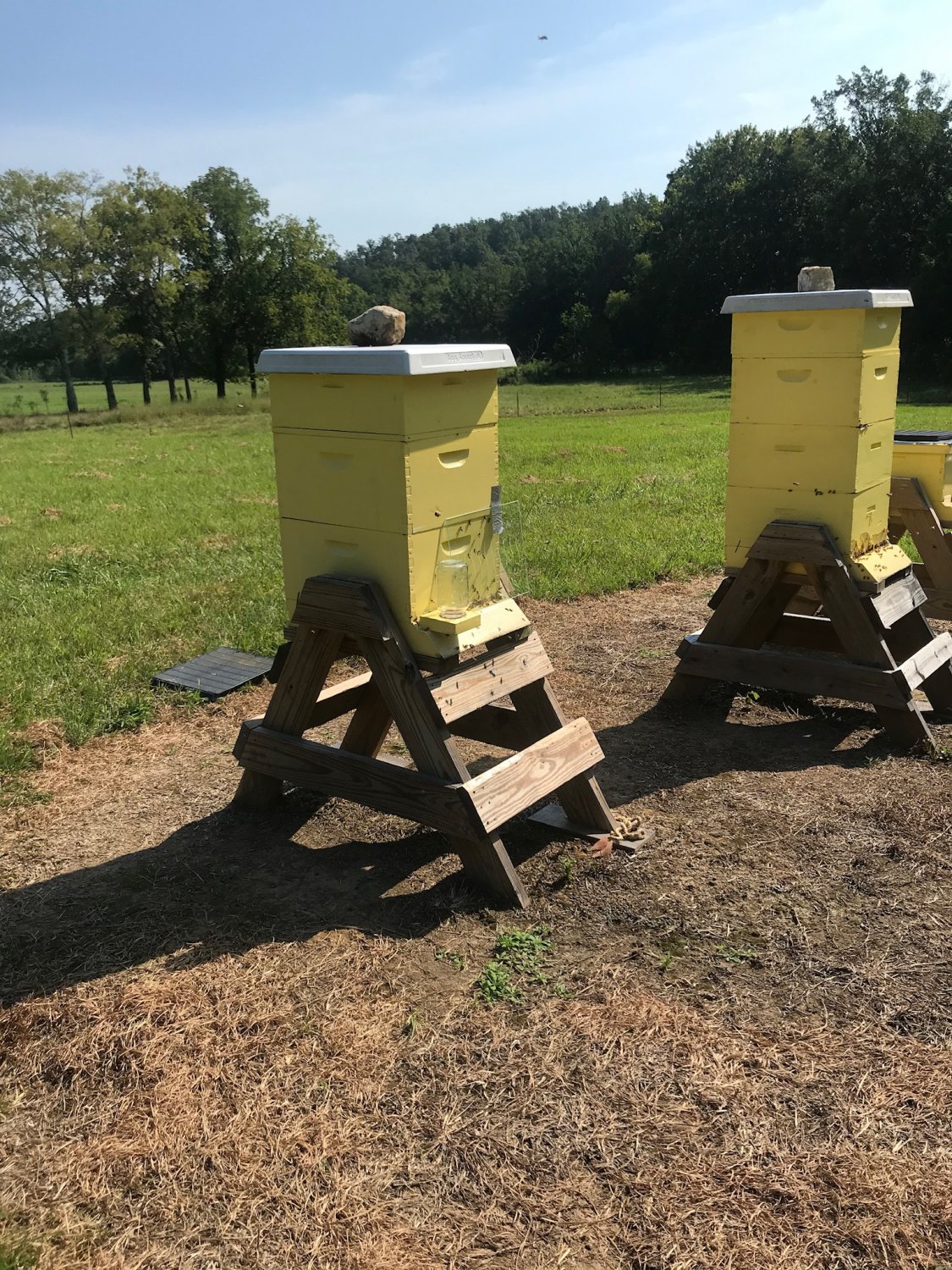 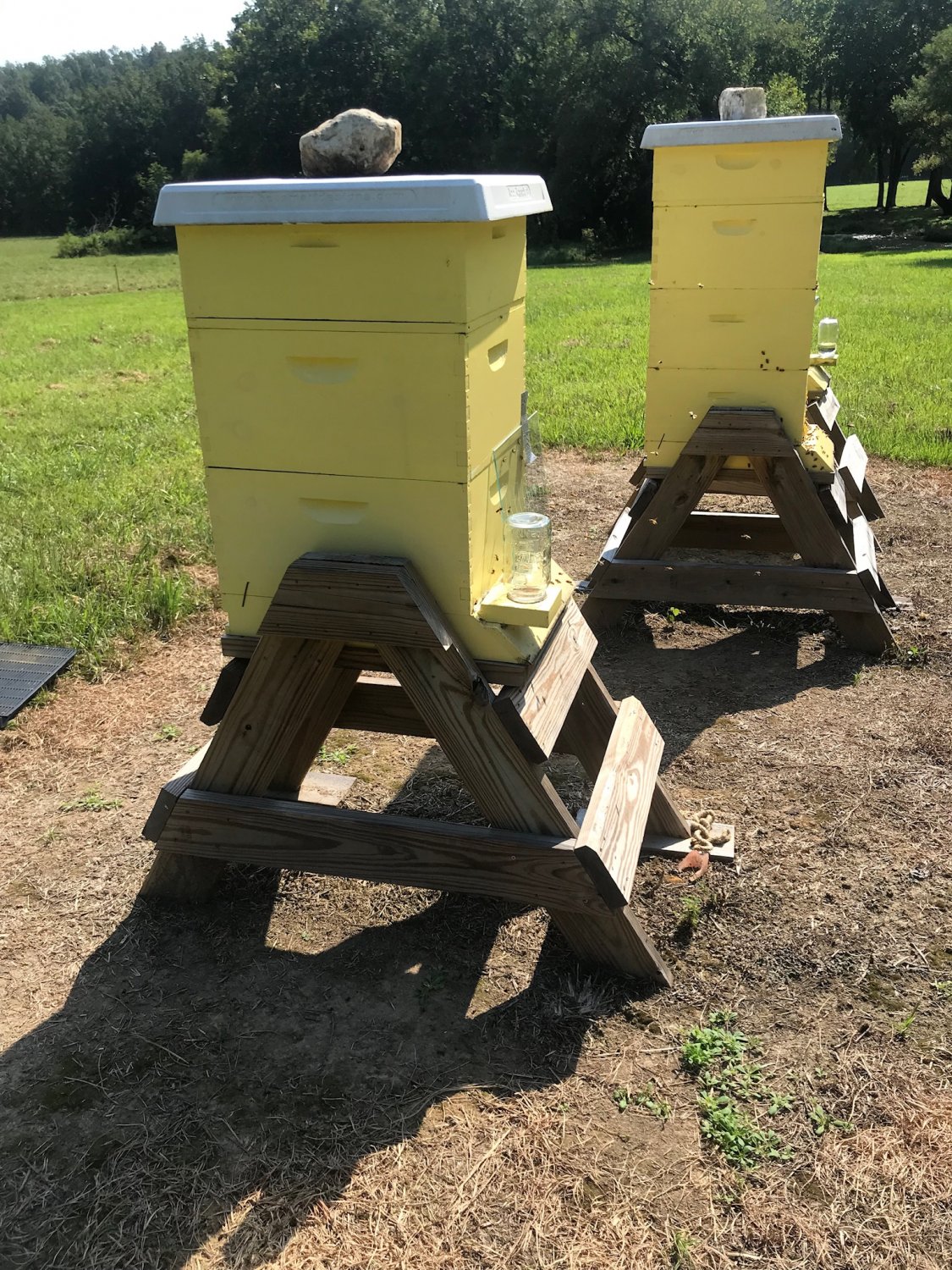 LOVE your hive stands....never seen any like that before. Also love the cheery color of your hives. Great pics!

Interesting stuff! Thanks for sharing.

@Beekissed thank you for the compliments! My choice in color and hubbys ingenuity for the hive stands. However, as you can see there is one drawback to them once you put the super on, if (thank heaven) you had two you almost need a step-ladder to get in them! So if any of you out there are going to make them yourself, you may want to aim a bit lower, by like a foot!
To get back to robbing - the glass does seem like it has actually stopped it. We blocked off the small hive for 3 days and at the end of that time we put in-hive feeders on all 3. My two large hives are going at them quite a bit, drinking about 2 quarts a day. The middle hive i’m Only feeding because I’m feeding the other two but they don’t get as much. I’d rather have a super on soon but when we had one on they weren’t building it out - but I think that problem is for a different thread. Thanks for the comments y’all!
You must log in or register to reply here.
Share:
Reddit Pinterest Tumblr WhatsApp Email Link