Since she’s separated, I’ve decided to halter train Coy. Food is a good motivator and she’s already holding still while I slip it on. The first few times she was not a fan lol

It’s just a little crocheted thing. It’s useless for leading since it’s stretchy, but I figure it’ll be cute and comfy for getting her used to the idea before trying to actually take her out with a “real” rope halter.
She stomped at me a few times and was very skittish at first, but she’s learning quickly that I am the bringer of all things good

Today I was thinking it might be a good idea to halter train Dingo too. I’m assuming that he’ll become at least somewhat dangerous at some point, so it might be nice to be able to easily lead and tie him 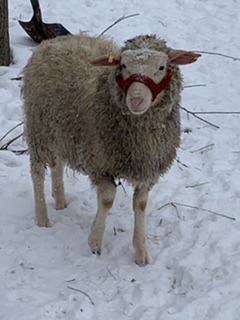 I’ll figure it out another day. It’s kind of a nasty cold snowing day today.

That little ewe is gorgeous! And look at you crocheting halters, makes me wish I had a handicraft skill that would so casually be put to use in other areas of life

.
Shovels are so limiting!

SA Farm said:
Today I was thinking it might be a good idea to halter train Dingo too. I’m assuming that he’ll become at least somewhat dangerous at some point, so it might be nice to be able to easily lead and tie him

Definitely halter break your ram. We did not hater break our current rams but put halters on them for control. When he was in 4-H DS1 had an enormous registered Hampshire ram that was very dangerous. No one could go in the pen with him without a large piece of wood to whack him when he charged you. (Not "if" but "when"!) DS1 called him "Killer".

However, since he had been shown a lot, he was halter broken and when haltered he was safe and would not charge. He lived in the lower pen where there was a window to the old goat pen and a but in wooden manger outside the window. We used to feed the goats that way. To safely enter his pen or work with him in any way, I had to catch and halter him. The feeder was a barred goat feeder that required him to stick his head between the bars.

Killer is long gone and none of our other rams were that dangerous. But I NEVER turn my back on a ram.

I’m hoping that I’ll have time and inclination to halter train all my sheepies this year. Dingo and Coy are my priorities for training first. Coy because she wasn’t bottle raised or raised here and Dingo for safety.
When that’s done, I’ve been having some crazy thoughts about training Woolfie to pull a little sled or something. Baby and my young niece and nephew would love that lol

Coy is just the cutest

I definitely don’t regret giving in to temptation and getting her lol!
@thistlebloom Crocheting is one of the first handicraft skills I got into that I actually enjoyed doing. I learned to knit and a bunch of other things like that, but never took to them! And shovels are awesome

I downloaded an app for making collages and put these together lol
Before and after pics, then a row for each of the three leaping girls

I can only crochet hats that never fit anyone, All my crochet turns into round bowl shaped items. I can knit, but my knitting is super tight and the socks i worked so hard on for DH would only fit a child! I gave up spinning for that reason. I find it calming to nit though so maybe I will knit a couple baby blankets for the new grandchildren. But then I would have to crochet edging on them so I am doomed.

Nothing wrong with shovels.

Coy is doing so well with her halter training! I switched her to the actual sheep halter that I bought and did a tiny bit of “give in to the pressure for grain” training yesterday. Did a bit more today since it’s super nice out (sunny and only -3) and she did great! No leaping this time, just a bit of struggle here and there. Nothing serious, so I’m proud of her 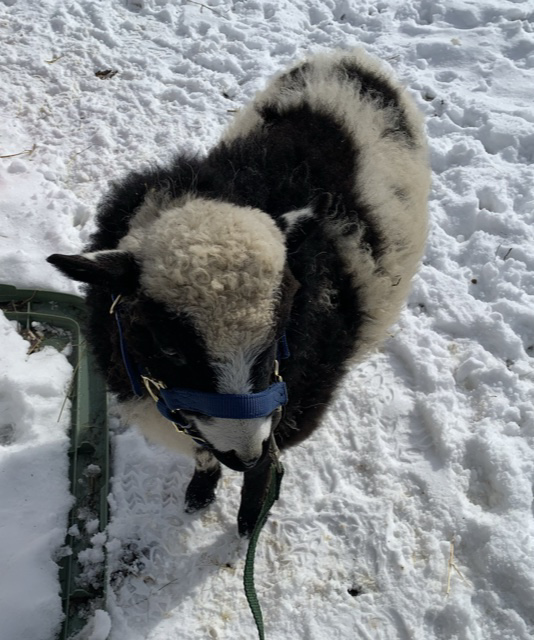 Woolfie got to wear the crocheted halter for a little while 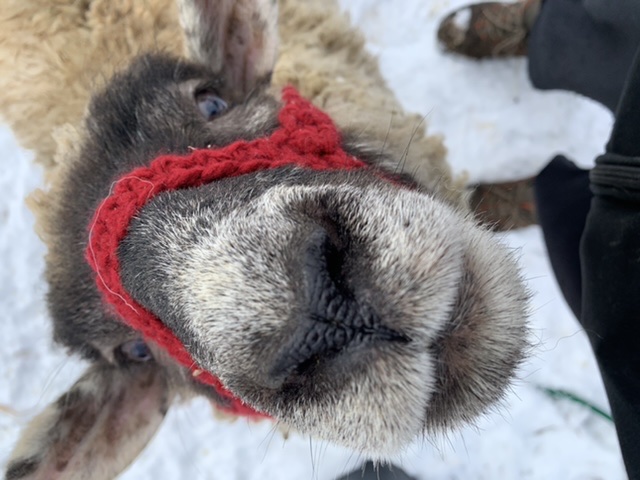 I’m thinking about shearing her this weekend. It’s supposed to warm up quite a bit then and she seems super itchy...has a bit of dandruff or something. No lice or other bugs that I could see, so I think I’ll just clip some off a bit long and shave her down further for the summer later this spring

I won’t have time to finish it, but I should get a nice start, at least.
Yeah, that seems like a good plan.

I’ve only sheared two sheep, one time in my life. We kept a group of this or that inside the yard fence to keep the grass down and decided to buy a pair of poly pay’s for whatever reason escapes me to this day!
The others, the meat mutt’s purpose in life was well defined and they’re day’s were numbered but i was hoping these would proliferate and magically turn into a herd of purebred wonderment and add a youthful beauty to the home place.
so, i called Sears and ordered the nicest set of electric shears they offered and when they arrived, got after it. Now if you look closely you’ll see some errors in my procedure.
I moved this pair into the corrals, the same ones used for cattle, dirt floor mostly cow poop ground as fine as is usual in the corrals. No real confinement for two sheep in a corral pen so i caught one with a catch rope, (never were handled much and not so personable) and tied him up close. Started in with them shears and before too long my back was sore from all the bending over and from chasing that sheep around, bent over, on about a two foot tether, and then the sheep got tired too and laid down! Well, the quality of the cut was greatly diminished due to all the cow poop in the wool and the process went even slower.
Noticing what a joke this was i got a blue tarp to work on in hopes of salvaging anything i could of the fleece which was allready ruined but it was far too late. After 45 minutes i decided to give the sheep a break during which i observed the numerous little nick’s and contusions i’d put all over the poor thing and decided “it was good enough. The goal all along was to simply get the wool off to keep them cooler. All in all i had about an hour in the project, a somewhat bloody sheep that resembled a poodle with a poor trim AND one more to go

these days watching a show or something where people are shearing, i marvel at the speed and efficiency some have for this sport But have concluded “it’s not for me”.

Alasgun said:
I’ve only sheared two sheep, one time in my life.
Click to expand...

Same! Last year I sheared my two original girls with my DH. First time for all four of us lol. Only nicked them a few times, thankfully! It’s definitely hard on my back, but I’m hoping to have a stand made before I get to work on the majority of the flock. I’m probably going to shear Woolfie myself with hand shears for this go-round. I have electric shears, but really don’t feel comfortable using them without making sure the sheep are thoroughly restrained. I really can’t manage to roll them around on the ground and get it done in just a minute or two like the shearers in videos!
I didn’t think it was going to be for me. I wanted hair sheep! Glad I have my wool babies now though

I let Coy out to run around today and she wasn’t having any of it. She followed me for a minute, then turned tail and went straight back to her house. To be fair it snowed a lot and was quite cold today lol

The Am rooster who was somehow injured is still separated. I candled the eggs I’d thrown in the bator and got nothing. Looks like he hadn’t managed to get the girls taken care of before his injury. I have higher hopes for the Cochins, but will need it to warm up since all I got is a couple blood rings there. Thinking the eggs got too cold. Hopefully next time we’ll have better results. I think I’ll give it another few weeks, let it warm up more before I try again.
You must log in or register to reply here.
Share:
Reddit Pinterest Tumblr WhatsApp Email Share Link