A few days ago, I noticed Foxy had a tiny bit of swelling on one of her teats. The next day, her udder was crazy full and she was kicking off her lambs.
It’s the right teat, so hardly visible, but nice udder, right? I think the attachments could be a bit better, but still pretty good. It’s the front udder attachment that seems to be a bit lacking. 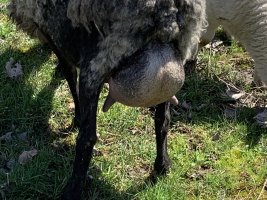 Woolfie has tiny teats, which is one of the reasons I think my hands get so sore. But her attachments are, I think, excellent. (I’ve mostly learned what to look for from reading/seeing pics of goat udders on here, so I could be way off.) 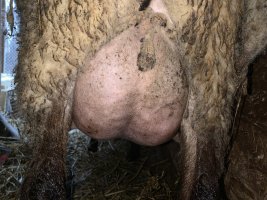 Anyway, looks like one of Foxy’s lambs gnawed on her teat. Like, three little cuts in a row. I pulled the boys and milked her out enough to make her slightly more comfortable and make sure she didn’t have/doesn’t develop mastitis. Hopefully she dries off okay. Her one ram lamb (the sweet bottle boy) went to his new home today. He’ll be a pet, yay! I wasn’t sure I could eat him, honestly. He was so cute and sweet! Glad he’s got a good home

Waiting to hear from a hay guy regarding a few small bales. If it falls through I could get another bale of haylage. My grass is finally growing, but I’d like to give it a bit longer to really establish itself and I only have a few days of haylage left. DH also has plans for next week, so they’ll need to be inside while we go out.
More feed it is

Other than the little ram who went today, there’s been little to no interest on my ads. Almost had a really nice group sold, but they decided they didn’t want to shear, so they’re looking into getting hair sheep instead. Don’t blame them. That’s the direction I initially wanted to go in for the same reason back in the day.

Had Dingo out the other day and he was a perfect gentleman. He also proved that the ground is still a bit soft for full time grazing since he turned his kennel into a mud pit! The other reason to give the grass/ground another week. Ugh, such a late spring! 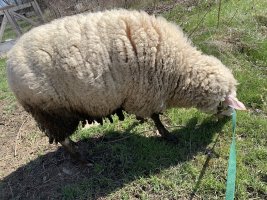 Gotta shear him soon. Look at that beautiful fleece 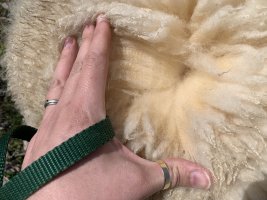 I think that’s about it. DH is out golfing today, but I’m hoping it’ll still be nice and light enough out that I can get Woolfie shorn when he gets home.

Kittens are doing so good 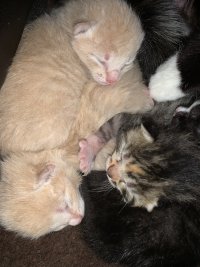 It’s been a bad week. The kind where DH and I are staying up most of the night waiting to sss.
Most of the animals are just fine. Queen went broody and is sitting on 6 turkey and 10 chicken eggs (appropriately staggered). One of the other two turkey girls are thinking of joining her, but I don’t have anyplace to put her, so I’ve been chasing her off the nest everyday and hoping to keep her disuaded.
Chickens are fine. Laying fairly well. I actually need to give some eggs away since I’m sitting on 4 dozen! Some need to be washed first since they were either laid in the run or during really mud/wet times.
I’ve been keeping Kit and her lambs inside since her lambs are spoken for. They’ll be leaving the first week of June, so will be weaning them shortly to make sure they’re doing good on their own before heading to their new home.
Kit isn’t up for sale right now since no one seems interested and I don’t really want her to go by herself. Thinking of maybe trying to sell her as a bred ewe in the fall…or sending her to freezer camp…haven’t decided for sure yet.
Dingo’s the only one left to shear, but we’ve been getting too much rain to get him done yet. I’m keeping an eye on the weather and waiting for the opportune moment.
I have to remember to wear lots of mosquito repellent when I am ready so I don’t accidentally shear myself in an attempt to get the darn things away from me. Getting Kit done was bad enough - I hope to remember my struggles so I get them shorn earlier next year…before the mosquitoes come out!

SSS? I know one of those stands for SHUTUP, but what are y’all SSS’ing?
M

I know that!!! Just wondering what the first S is pointed at. LOL LOL

Dogs. They get bad around here when they pack up and go on spree killings

Had various packs through here before. They’re why my birds can’t free range and I use heavy duty skirted dog kennels. Had them even get through that now and then. We do what we can, but it’s not always enough

At our place in Lindale, I was adamant about fencing in the whole place, to keep our dogs IN and everybody else's OUT. It was a pain to open/close the front gate, but well worth it. If I can EVER get closed on the new place, the same thing will apply. I can't stand people who, just because they live out in the county, let their dogs run loose.

Internet has been awful the last few weeks! Really need a better provider, but no such thing exists around here at the moment.
Weather’s been decent, so getting lots of work done lately. Garden now includes 3 Concord grape vines and a blueberry bush. I use old tires as planters and have them against my chicken pen so they will have the benefit of the bugs and shade…plus eventually any grapes or berries that fall 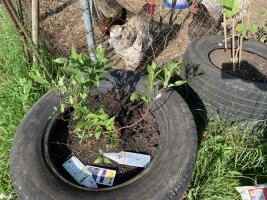 My apple tree is doing well and we’re planning to put in at least one more fruit tree this year. Cherry and/or pear, most likely.
Got a bunch of rain earlier in the week and managed to get Dingo mostly shorn before it arrived. I couldn’t get his huge butt up onto my stand, so just tied him to the front of it and did what I could until he got bored and stated head butting it

Next time I get him out, I’ll finish him up and trim his toes.

Just today we finished putting up one of the new kennels we bought for sheep rotation. We have enough now to finish fencing off a large area with a shed out back, so that will help with housing options. We’ll now have two full kennels to rotate in the yard. I just need to figure out how to split up the 8 sheep. I’m hoping Dingo will be nice and I can keep him with the grow-out boys to have two groups of 4. I know it can work depending on the dominant ram’s temperament, so I’ll give it a try and see if it works. I’m thinking I’ll throw the three boys in, then bring in Dingo and watch that they don’t get (too) beat up. 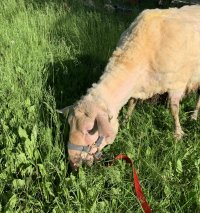 Kit’s two lambs should be picked up tonight and we’ll be down to just freezer and keeper sheep.
The pack of dogs haven’t been back. I’m both relieved and annoyed since I really wanted to put them six feet under. They’d managed to rip off Coy’s tail (she still has a few inches and is recovering nicely) and do enough damage to her ewe lamb and Woolfie that the two were put down. We salvaged what we could of Woolfie’s meat.
The huge lamb front left is Woolfie’s boy. He’s two days older than Foxy’s lambs to his right! I think he’s even bigger than Foxy at this point! 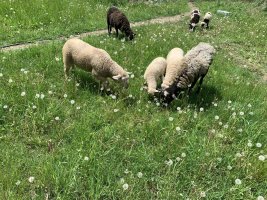 The kittens are growing fast and Kitty is an excellent hunter, bringing them chipmunks, baby squirrels, rabbits, and birds! They’ll grow up to be excellent mousers at this rate! 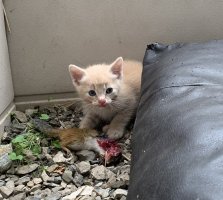 Queen’s hatch is due tomorrow. I’m seriously considering selling my turkeys and just having sheep and chickens. I might keep Queen, but the other 3 will go, bringing me down to 6 birds total. DH might get pheasants again one of these years, but I’m happy to downsize to just the chickens and my turkey incubator for the moment.
I think that’s pretty much it for updates for now. Hopefully the weather will stay nice and we can continue to get lots done

I’m so sorry about Woolfie and the lamb. That is so wrong on so many levels.

Baymule said:
I’m so sorry about Woolfie and the lamb. That is so wrong on so many levels.
Click to expand...

Thanks…it was just awful. Like something out of a horror movie. I obviously wasn’t up to talking about it right away. I was looking for a home for Woolfie that would be better suited to her than here. Definitely not how I wanted her to go…and I was really excited to keep Coy’s daughter

Evil dogs. I hate them so much

We did some work on the sheep rotation kennel, adding plastic siding so they can’t be caught through the links. (We wanted crazy carpets, but could only find this plastic-like stuff, but it should still work.) Where we want the air to move through, we wove privacy slats and zip tied them on. I’ll try to remember to get a pic tomorrow. I’m still thinking we’ll add some more to it since there are only 2 sides completely done, but it’s a good start to make it safer while still keeping it light enough to be mobile. We bought enough of the plastic panels for the other kennel as well. Just need more of the privacy fence stuff.

Kit’s lambs went to their new home tonight, so that’s good. I’m debating between keeping Kit for another year, sending her to freezer camp, or trying to sell her again. I had her posted for a few weeks with zero interest, so

I think when people see an adult for sale, they assume something is seriously wrong with them, so they either lowball or don’t bother.
Literally the only things “wrong” with Kit is the extra teats and the more-skittish-than-I-personally-want temperament. Even with that she’s not that bad - hence the debate.

Anyway, we’ll figure it out. Hopefully I’ll have pics of freshly hatched chicks and poults to share tomorrow too