Give them a treat and they will fall in the chair by themselves! Hahaha

Baymule said:
Give them a treat and they will fall in the chair by themselves! Hahaha
Click to expand...

OK!! Working on that - they aren't too thrilled taking anything from my hand - the idea of them falling into the chair by themselves is hysterical!!

End of the day ---
Every night I put the sheep away - some hay and lock them up safely for "nighty night". I love it. The walk back to the house is always a special treat - I'm usually graced with picture postcard sunsets. It's the witching hour of lighting too.
Two of my dogs - Obi Wan and Ree (who had to fill in for Obi all summer while he recuperated from a broken toe) and the 'moon rise'.
G'nite all - sleep well. 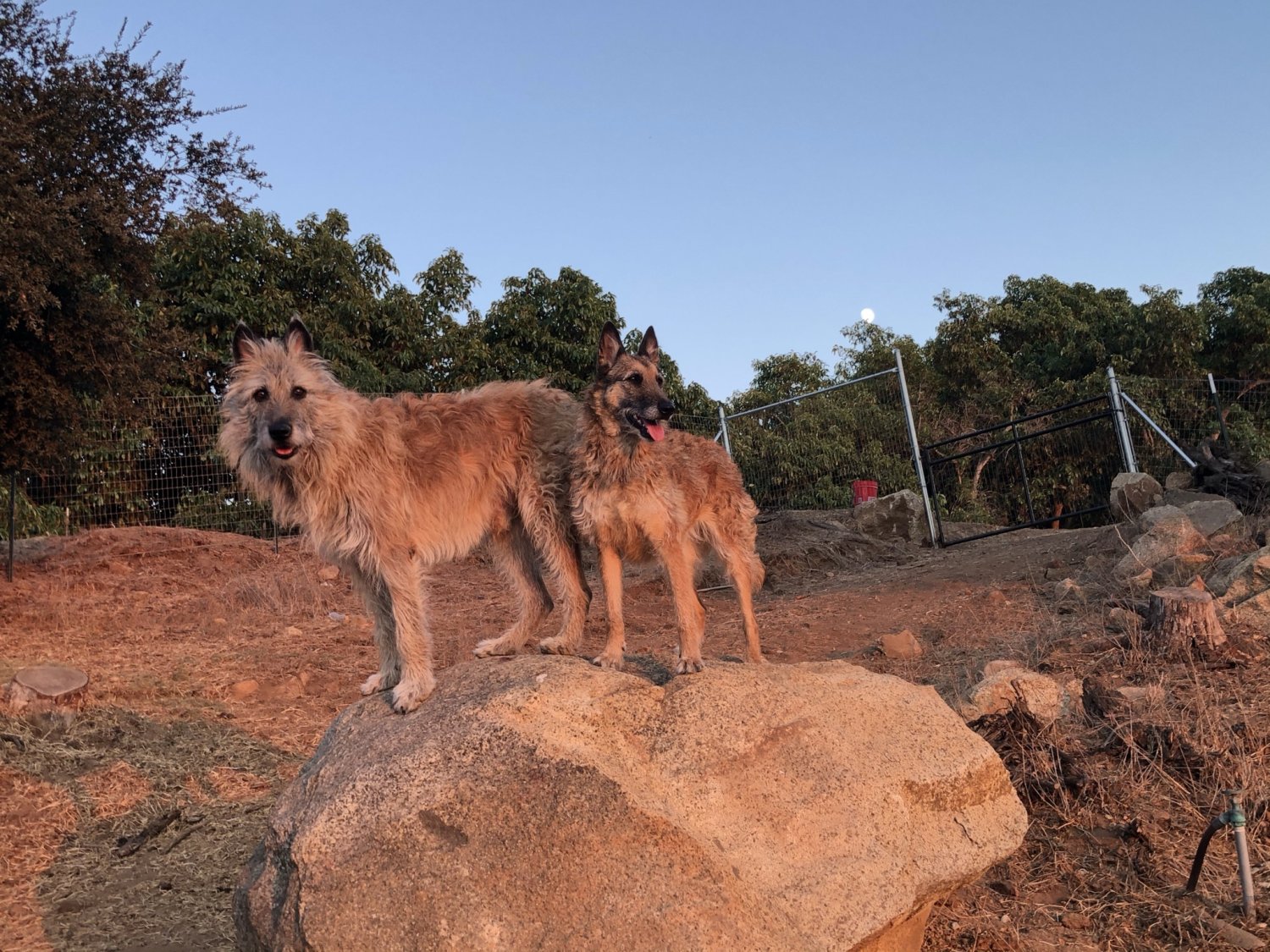 A repeat of yesterday - one more hoof trimming done - three to go. This morning's adventure ...
I decided to try and go for the next biggest sheep. Of course ~that one decided no way she was going to be caught.
I could get close with Obi's help but not close ENOUGH to grab or lasso her. Sigh. And yesterdays pedi-cure recipient seemed to WANT to be caught. In the end I got Ol' 22 - the largest of the lot. I don't know how old he is other than OLD (12 yrs or so). He's probably the first sheep I put a "name" to. Years ago while training Ree as a pup to learn her circle directions Ol' 22 would stand next to me as Ree did circle after dizzying circle. I thought she'd tire out

so I'd stand there with Ol' 22 and just rub the top of his head or his face. So I've got a wee soft spot for him. BUT -- today, all that good will from years ago was out the window. While he did get lassoed he certainly was not easy to steer to the deck chair! Could be he's a big guy and I'm not big. Twice I almost got him into the chair, and twice I thought the heck with the chair, he'll just lay down (well almost). But I persevered and he DID get into the chair. And boy it wasn't easy to get him to tip backwards into it either. He's heavy!

at Baymule's comment giving them treats and they'll be jumping into the chair on their own!! I got the trimming done as Obi watched (good boy Obi). Pushed Ol' 22 out of the chair a happy camper.
Two down, three to go. Before I started the trimming I had visions of OMG these should have been done LONG AGO. But their hooves so far look pretty darned good.
So here's Ol' 22 -- a bit of a silly guy.... 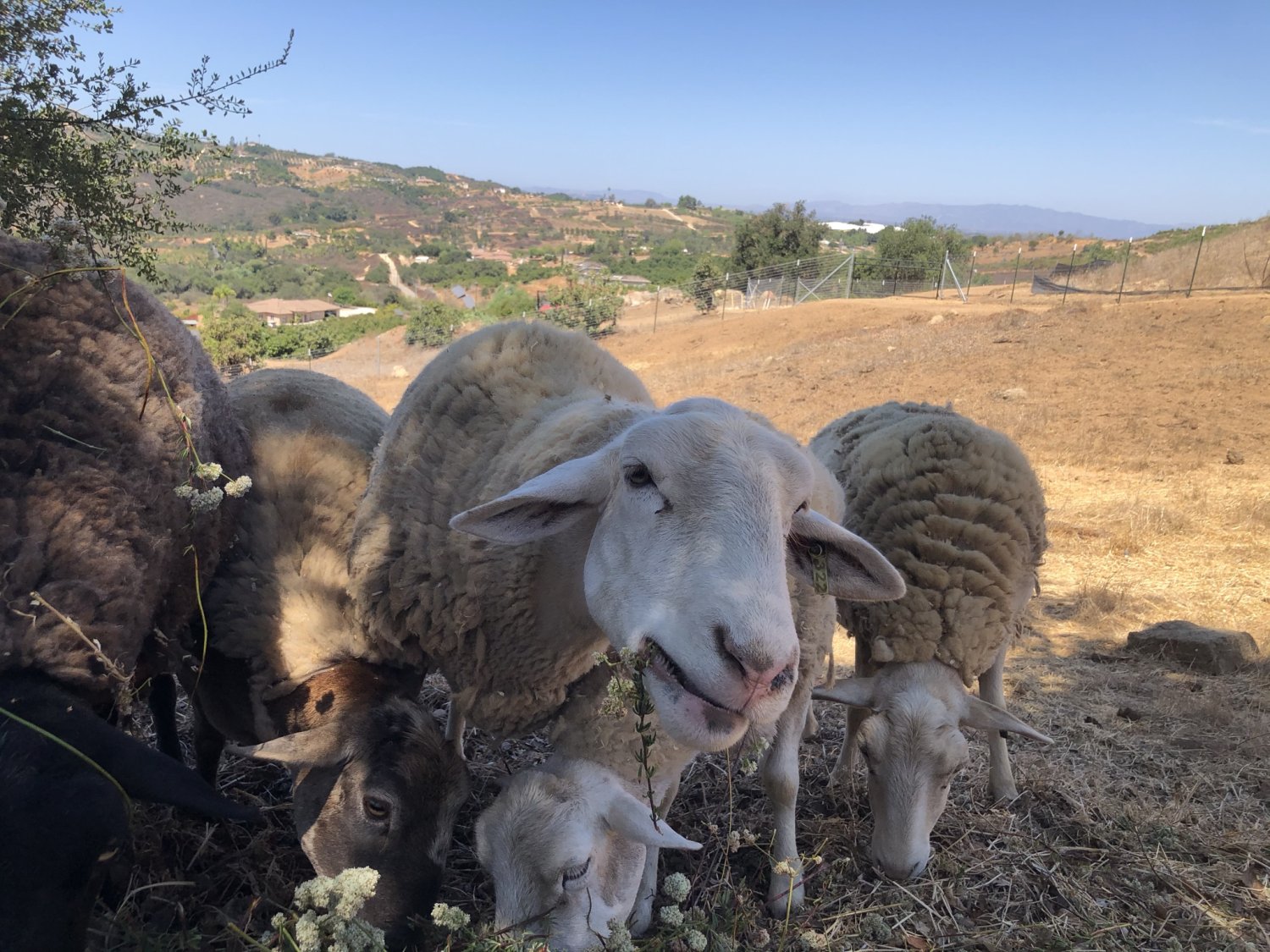 Another day, another sheep wrestling. One more down and maybe two to go yet??
This morning I managed to snag the wether that I wanted to do yesterday. Feisty critter he is!
It took a bit to lasso him up - thank you Obi Wan for the much needed help. How do the rest of you do
this stuff without a dog is beyond me

.So I got him into the deck chair and he settled a bit. Got one hoof trimmed and he turned into MR Struggle. Geeze. Held him in place he'd settle and then when I let pressure off it was MR Struggle all over. I decided to step back out of flailing legs way. AND ... yes he popped himself out of the chair. Repeat of lasso him up and back him into the chair - less easy than the first time. GEEZE. Got another hoof done and MR Struggle returns. I let him dump out of the chair. Now he's quite proud of himself. The two who already have had their hooves trimmed are sort of looking at him like 'dude - you've got it all wrong'.

I hung around with them using Obi Wan to keep them on me as I decided if it was good enough just to do the fronts. They really didn't need much in the way of trimming, though the backs, which I hadn't done yet had some small cracks/flaking that I thought would be better trimmed off. SOOOooo the lasso rodeo began anew. This time was no easier - BUT I fell on top of him as he tipped into the chair

- looking him straight in the eye I said 'It's not supposed to be this difficult.' AND then went about trimming the back hooves - which really weren't that bad at all.
Now this all took a bit of time - but I kept telling myself my mantra - "Fast is slow and Slow is FAST".
Job done - three down, two to go??
So my question on the remaining two - Since I was SLOW to be fast I looked very closely at their hooves - they look great, nice and pretty, straight and short. Do I even bother dropping them into the chair to trim?? If doesn't look like they need to be trimmed. The two remaining to be done are the black and the brown ones in the pic.
Obi Wan doin' his thing..... 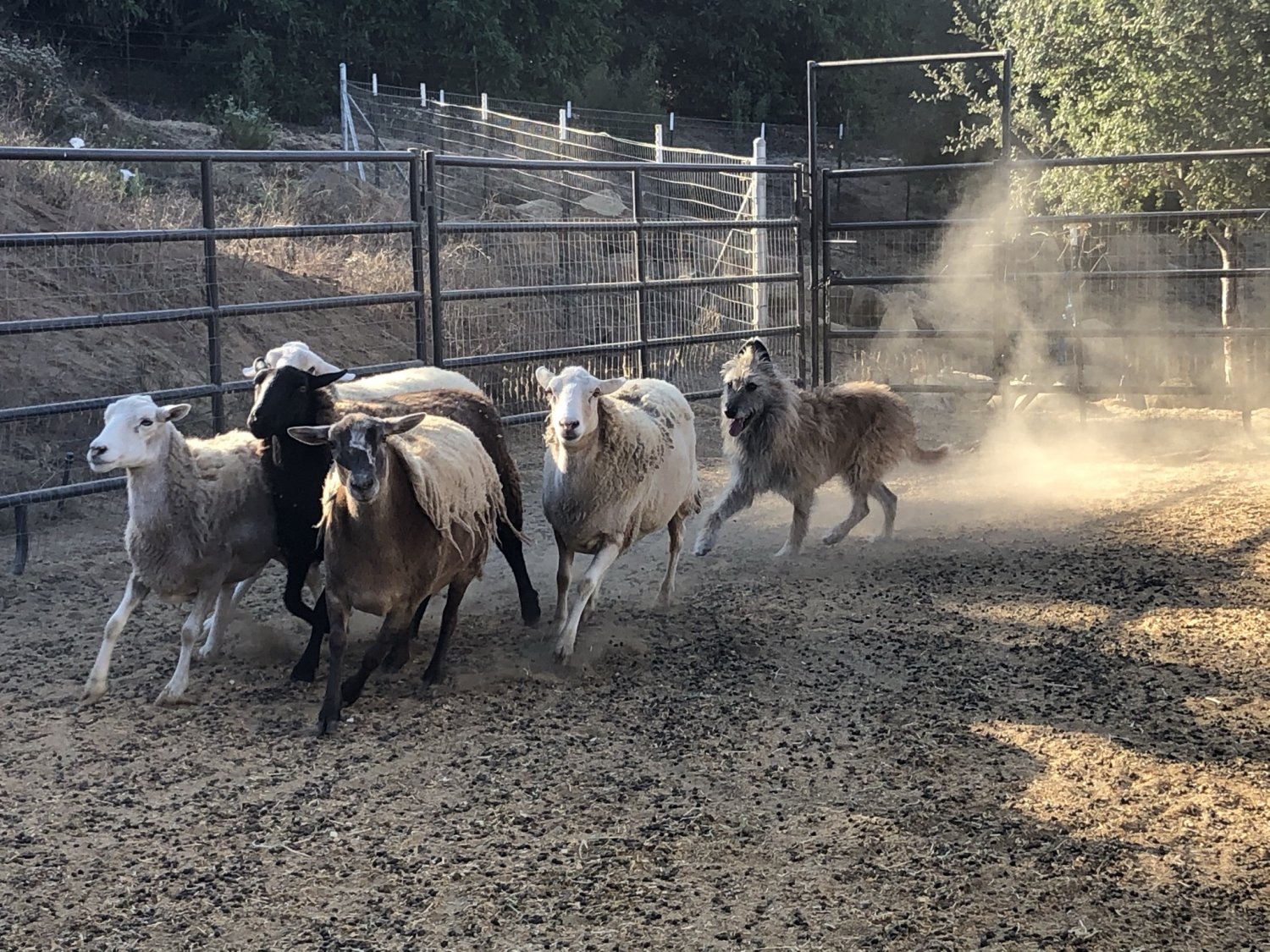 SageHill said:
So my question on the remaining two - Since I was SLOW to be fast I looked very closely at their hooves - they look great, nice and pretty, straight and short. Do I even bother dropping them into the chair to trim?? If doesn't look like they need to be trimmed. The two remaining to be done are the black and the brown ones in the pic.
Click to expand...

If they haven't really grown any since the last time they were trimmed you would probably be fine not to and just check again to see if they need it another time. When was the last time you trimmed them and what do they eat just pasture?

BrahmerQueen said:
If they haven't really grown any since the last time they were trimmed you would probably be fine not to and just check again to see if they need it another time. When was the last time you trimmed them and what do they eat just pasture?
Click to expand...

I'm not entirely sure. Could have been last November??? I didn't have them here at the time. They are on pasture here (which at the moment is brown and dried mixed native grasses - typical So Cal) and alfalfa. The ground is DG (decomposed granite) I'm thinking to just let them be since they look good.
Last edited: Sep 9, 2022

Last night we got some new sheep!! Was hoping they'd get here last weekend but they folks who had them couldn't get them into the trailer. So it was going to be this weekend - but of course Mother Nature had other plans. Fire. While where they came from is ok at the moment they were put in a voluntary evac area. They got all their animals out and the sheep made it here. They came from about 60-70 miles away. Once they got here their evac order turned mandatory

Once they "landed" in their stall they were so stressed - NOT - they started munching on the alfalfa happy as clams.
This morning I'm sure they are thinking "What the heck, WHERE ARE WE??

" They aren't too thrilled with me - to be expected. So it will take some time to get them acclimated.
Skipping the hoof trimming on the last two old sheep - if they don't look like they need it I will let it be. Besides we just may get some rain today compliments of Tropic Storm Kay (heard there were 100mph gusts in some of our mountains). The gusts are here now - but not nearly that strong - but I did grab the figs that were about to fall off the trees and a few lemons.

I'm hoping that the gusts don't take out my plumeria at the house - they sure are dancing around now as I type. The winds don't know which direction they want to come from - east? ok, no west? ok, no how about south - ok. It's all over the map.
Everything is all lashed down or put inside - going to be one of those stay put kind'a days.
The new sheep!! All ewes 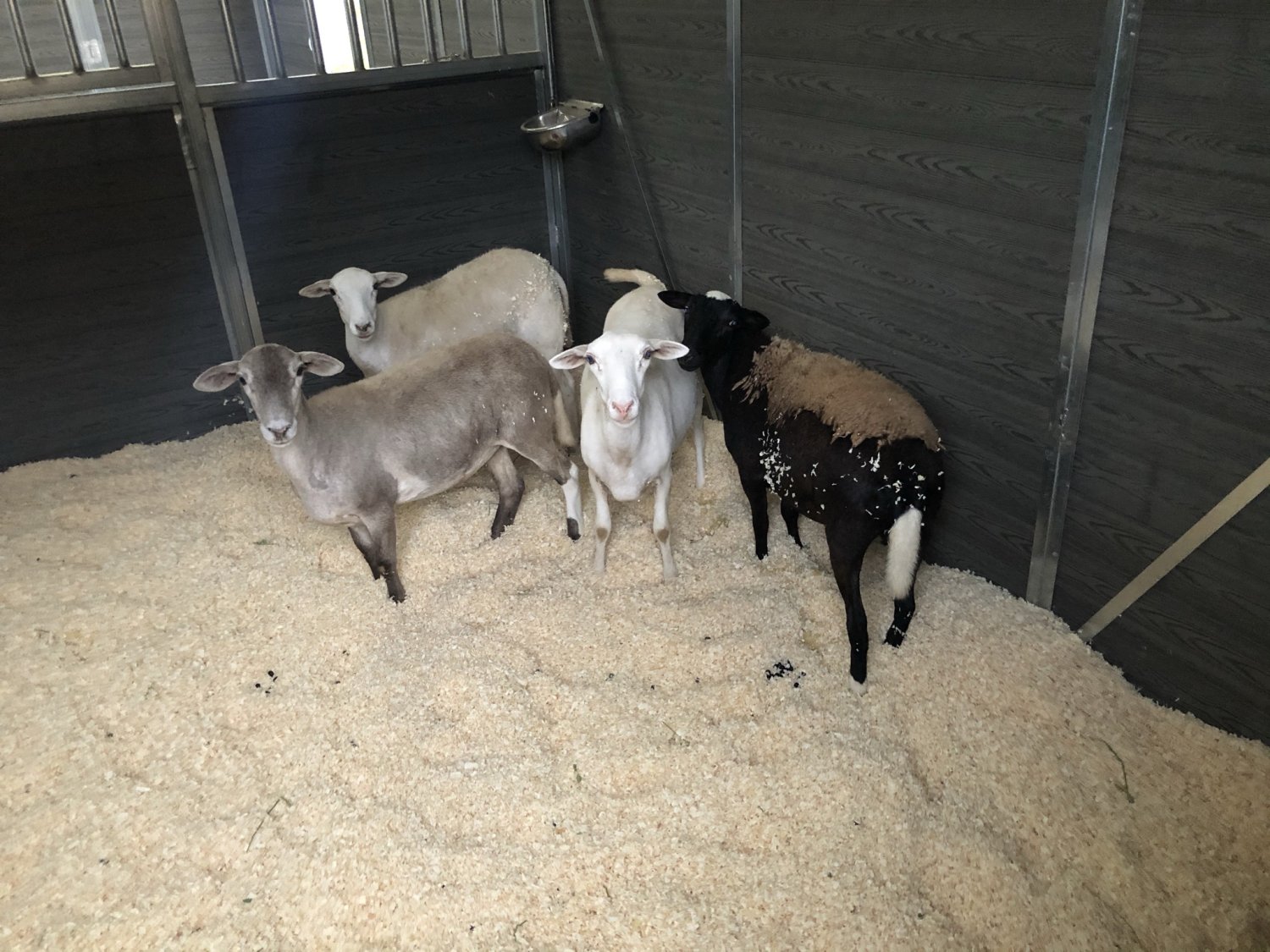 And the calm before the storm..... Hopefully we'll get some decent rain. The media is all over it like white on rice they're sure it's Armageddon -- just like everything else they report. 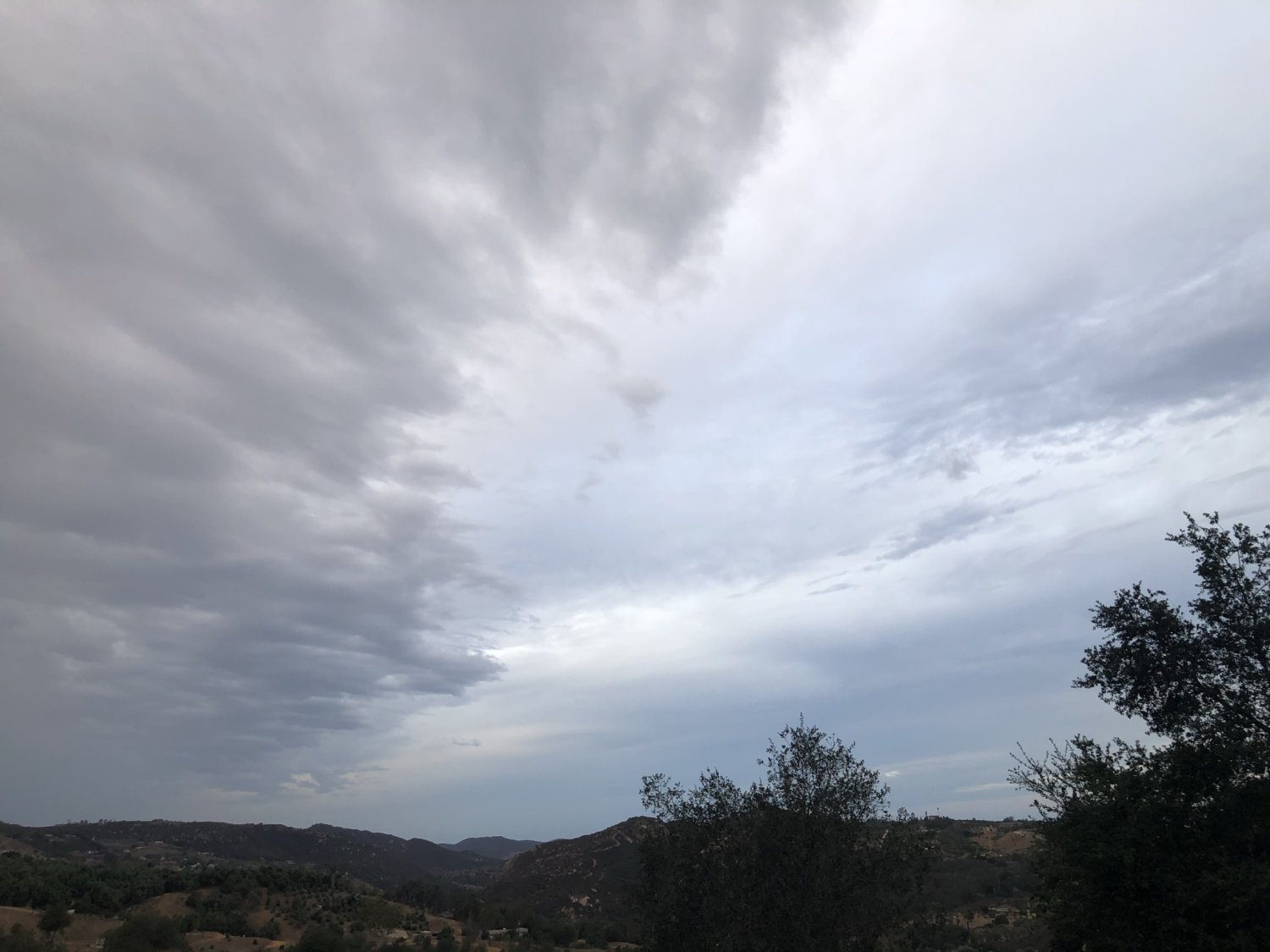 Very much enjoying your journal. Nice picture of the new sheep. I like the grey one, she is very pretty.

Stay safe and keep us informed on how you are doing... please and thank you.

animalmom said:
Very much enjoying your journal. Nice picture of the new sheep. I like the grey one, she is very pretty.

Stay safe and keep us informed on how you are doing... please and thank you.
Click to expand...

Will do! We are wet - 1/2 - 3/4 in so far - so we are good. It's been almost continual rain since morning - perfect nice and gentle no gully washers! The Fairview Fire is about 60 miles from us so we are safe.
I'm liking the new sheep a lot. There's a bit of taming to be done - but I'm set up for that. The gray/tan one really is pretty, she's the flightiest of the bunch - but not bad. I can sit in the stall and she will eventually join the others eating.
You must log in or register to reply here.
Share:
Reddit Pinterest Tumblr WhatsApp Email Share Link