You are correct -- Sentry will help train Sheba -- They will make a team (assuming he's lost his gonads). Yeah, those two divas will need to be kept apart! I believe it will take some pressure from Sentry as can bark and feel she will back him to the hilt! I may well extend his years of activity. They can sense each ones strengths & weaknesses. Good team!

Sheba sounds like she's growing into herself! So glad Sentry was able to stick around and help train her. Gonna have to call them The Dynamic Duo!!

Sentry hasn't lost his nuts yet, but he will. I like the dogs to be 2 years old, to attain their full growth and they need those hormones for that. With his problems, I figure he need those hormones even more. I am a believer in spay and neuter, especially for dogs that are excellent dogs, but sub par for breeding. I certainly don't want to pass on Sentry's problems to any puppies!

It has been raining today. Sheep were in their barn, dogs wanted in, why not. I was cooking supper and snapped this picture.

I don’t mean to disturb you but I really need to get to the kitchen sink! 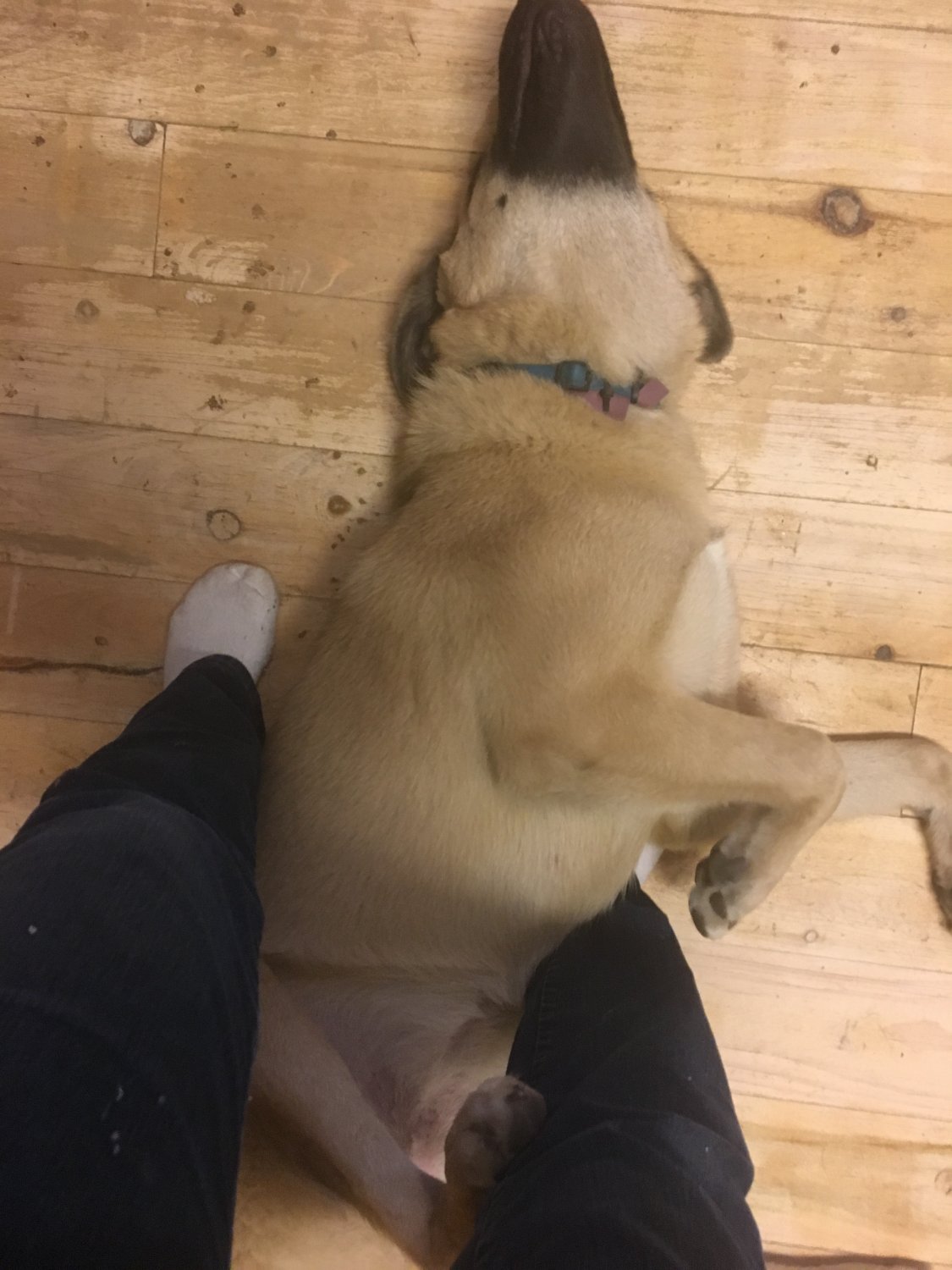 Sentry and Sheba are working this morning. She is really taking her job seriously. I’m loving it. 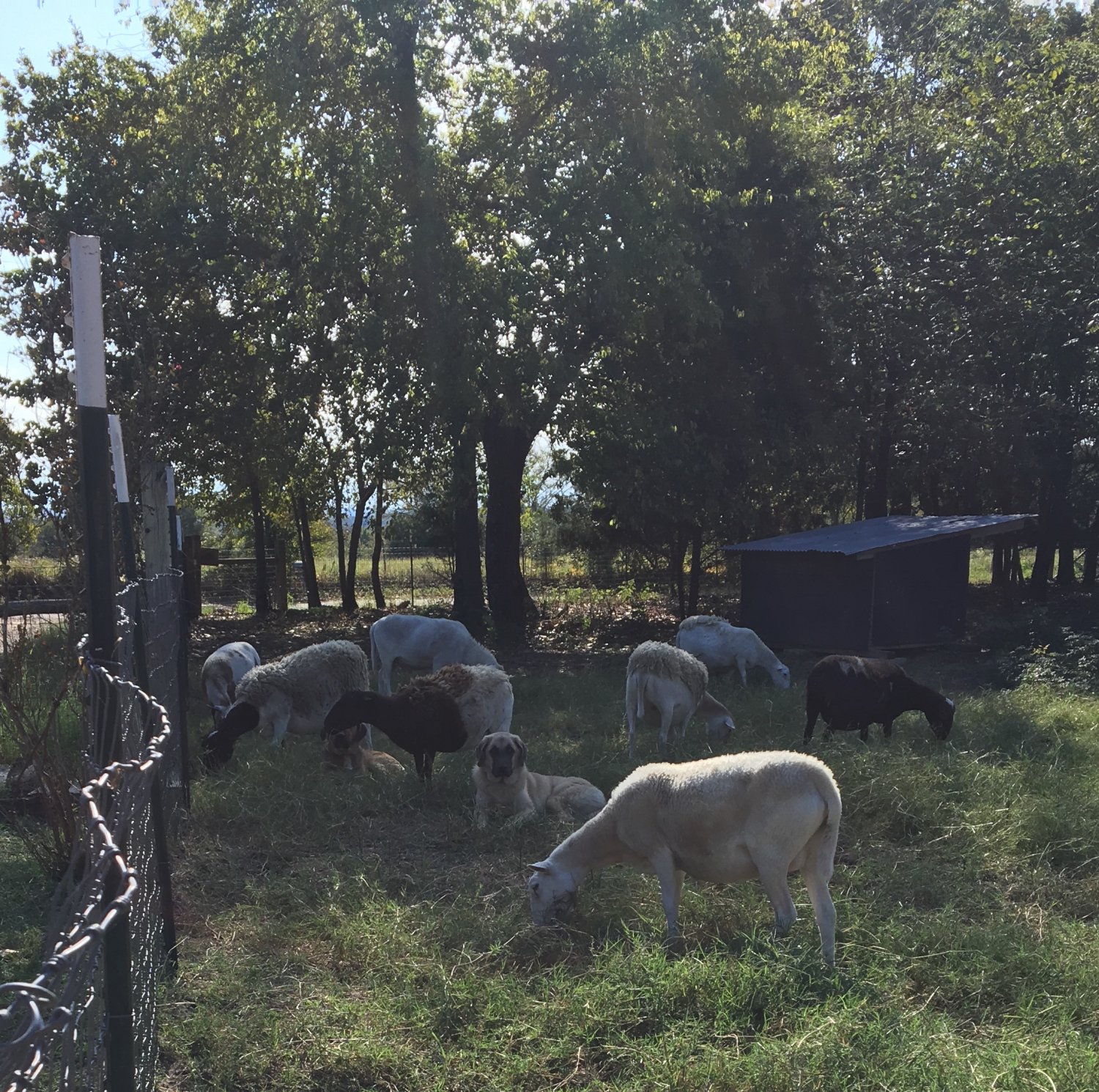 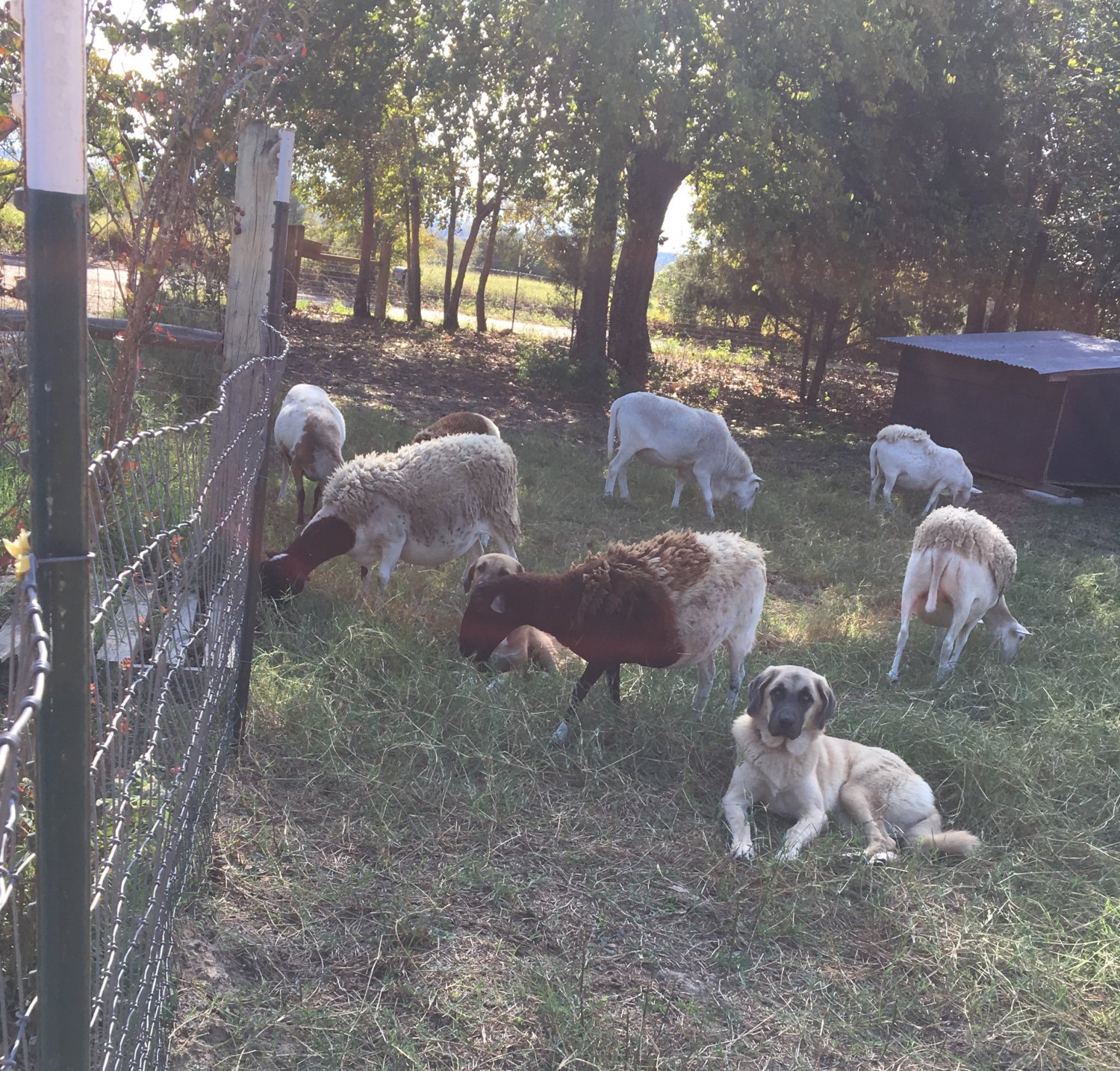 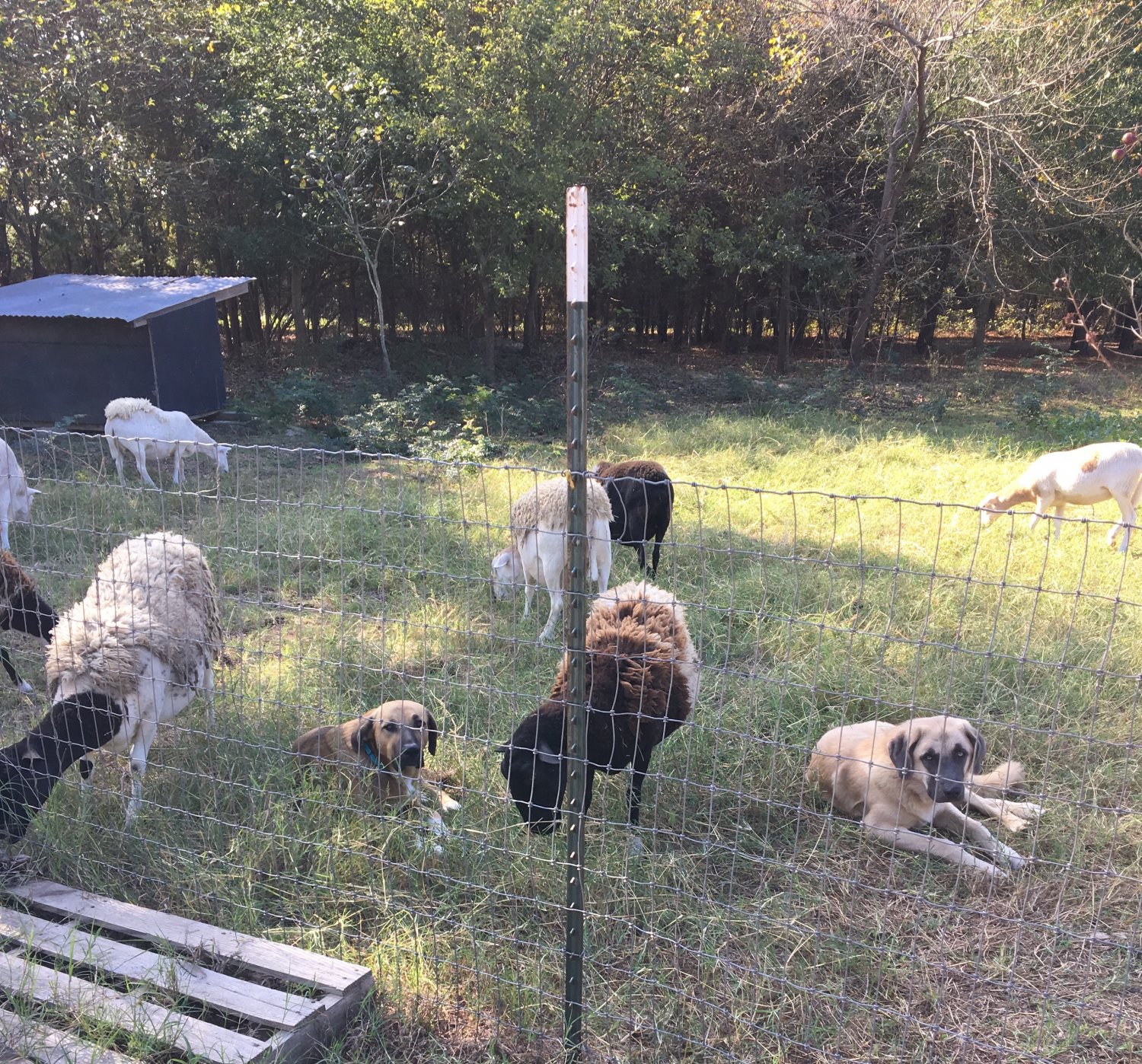 She looks right at home with the sheep! Sometimes it takes 'em a minute to figure it out, lol. You've done a great job with her!

They are such a beautiful pair!!! They look so serious when they work, don't they?

Sheba is getting so big. She's such a beautiful gal. When I let her in the house in the evenings to be fed, she goes directly to BJ's recliner to stick her nose on his arm so he can pet her. One evening he was in the bathroom, she got VERY concerned until she found him.

A ewe had twins October 18, Sheba was enchanted. I never jug my ewes, but her first was a single and Domino just wasn’t getting it that she had two. As long as she had one, she ignored the other one bleating for her. I didn’t hear that low rumble from her, like ewes do when talking to their lambs. So I closed her up with her lambs.

I let Sheba and Sentry in with Domino and her lambs. Sheba discovered baby lamb poop! Dog treat! Both dogs snuffed through the hay for lamb poop. Domino decided she liked her babies enough to butt the dogs a warning, so I put them out.

Sheba remained outside the jug, staring intently at the lambs. Did they awaken her guardian instincts! Were they new play toys? I didn’t know. I wondered what she would do if left unsupervised. Sheba even dug in as far as she could reach, dragging lamb poop to her. I filled in the hole.

Yesterday afternoon I went to do chores. I went in Sheba and Sentry’s pasture. I alway go in and love on them before we go to the house to feed them. Sheba talks, Rooooo! Raawww! She is so funny. I heard something, very faint. I stopped, cocking my head like a dog, listening. I heard it again. I checked Domino and her lambs. The ram lamb was outside the jug. Sheba had dug a big hole in her quest for lamb poop and the little guy had gotten out.

There was my answer. The lamb was not mauled, slobbered on or played with. Good girl Sheba. Bad girl for digging the hole, but good girl for not chewing on the lamb. 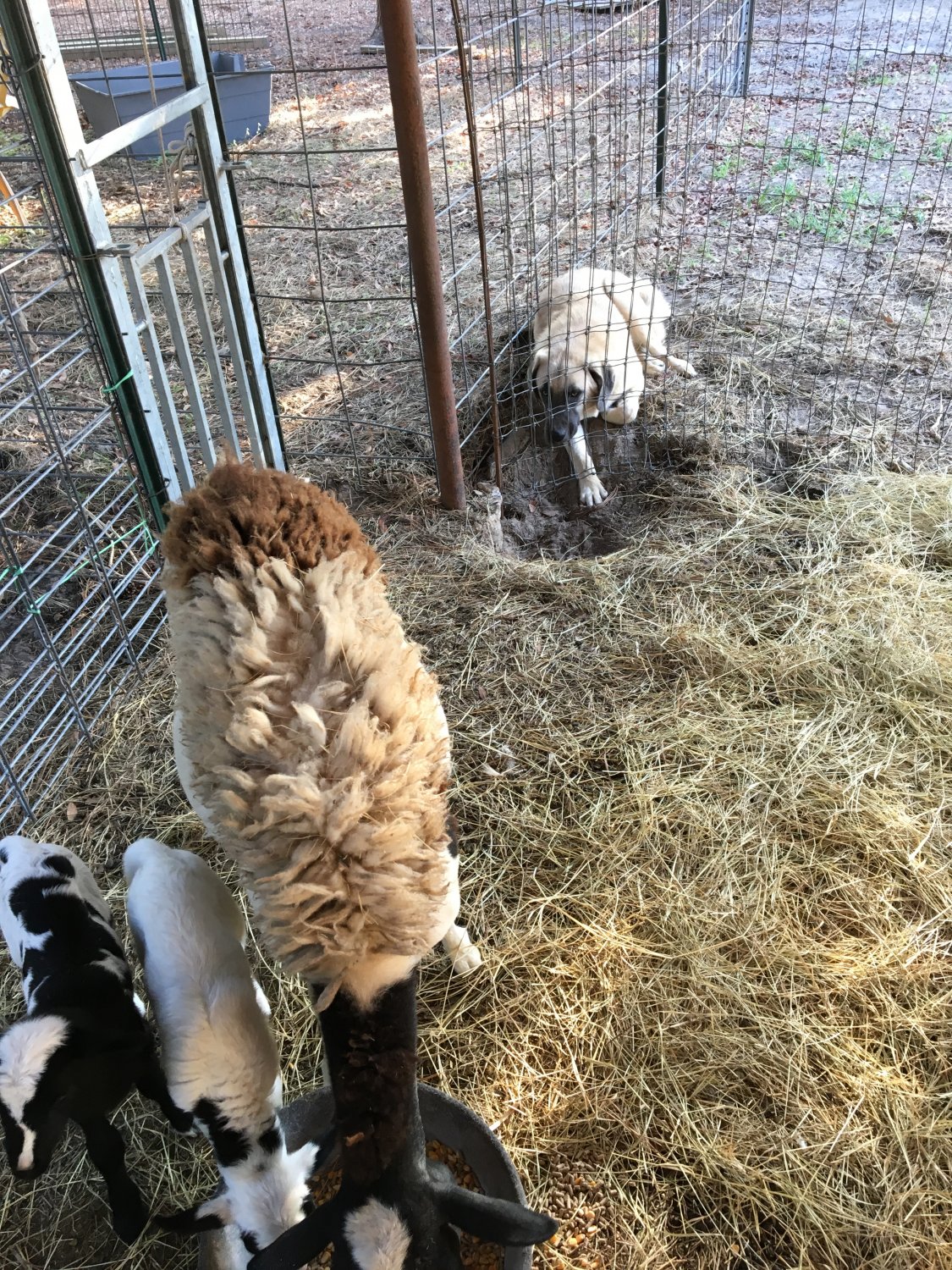