Sheba is growing like a weed, she is almost as tall as Sentry. It further illustrates the difference between a poorly bred dog and a well bred dog. Neither one of them care, they are buddies and one of them will be losing his num-nums to prevent his ever passing on his genetic faults.

Sheba "talks". She says ROOOOO and ARRAAAWW and yips little barks. She makes us laugh and has brought us great joy. She is gaining confidence with the sheep and behaves herself well with them. Wish the cranky ewes would behave as well as she does. She is highly intelligent and I am slowly leading her in the direction I want her to go in. She loves to play with the boys and darts in and out ROOOOOing and ARRAAAWWing and barking at them. Sheba rules.

Paris is friendly-sorta-at the fence. They will never be friends. Paris hates other female dogs and I know her to be a killer of cats, possums, snakes and anything she doesn't like-which is just about everything except chickens and sheep. Sheba wouldn't stand a chance with her clumsy lanky puppy body and tiny puppy teeth. Indeed, as she grows older, I will still never let them be together-it would be a fight and I don't care how "nice" Paris can be at times, she is just a mean b!tch. Paris even turns on the boys when she can't catch the garbage truck going down the road on the other side of "her" fence. She piles into them out of frustration and woe to them if another dog is outside the fence. She still loves Sentry and they play well together. Totally bumfuzzeling to me why she loves him and hates everyone else. Go figure.

Sheba still sleeps in the house at night, but is spending less and less time in the house. In about a week or two, I will set her up with Sentry for a companion and she can become a guard dog. Right now she is asleep at my feet. She likes to be a close to me as she can. She often lays on my feet while I am cooking, but I have to move, so I just step over her. LOL

Sheba is a fantastic dog, we love her. This will be an interesting next couple of years as she grows and matures into the farm partner she will become.

Baymule said:
She still loves Sentry and they play well together. Totally bumfuzzeling to me why she loves him and hates everyone else. Go figure.
Click to expand...

Could be, sensing his weakness in the hips, she's not threatened by him due to his disability? I bet she doesn't play as hard with him as she does with the other dogs.

Blue was poorly bred also and also has hip problems like Sentry, which is why I could buy him for $50, so we'll never be breeding Blue. I don't think he could really protect himself or the sheep in a fight with a coyote pack, though his presence helps to protect. Oh, he would TRY to protect, but I think the coyotes would sense his weakness also. Good thing our 'yote population are not very aggressive, nor are the bears....they are too scared of humans to get too bold here.

Got any new pics of Sheba? I bet she's growing like a weed!

Sounds like, with your guidance, she's going to be a really good guardian! Thrilled for you both!!

And yes - we need pics

Baymule said:
which is just about everything except chickens and sheep.
Click to expand...

And you and BJ!

Beekissed said:
Could be, sensing his weakness in the hips, she's not threatened by him due to his disability? I bet she doesn't play as hard with him as she does with the other dogs.
Click to expand...

She will trash him just as hard as she trashes the other boys. For whatever reason, she loves him. She only wants to play with the boys for a short time, then she is ready to go home. If I'm not out there to take her back to her backyard and side pasture, she will dig out. It's her way-always.

Sheba and the boys were in the front pasture as we cleaned fence row across the front in the other pasture across the driveway. Sheba barked her displeasure at us. A neighbor kid that was helping us said, "Sheba doesn't have a puppy bark anymore, she's barking like a BIG DOG!"

When I opened the gate and let the dogs out, they ran to the house, I got hay for the sheep and Sheba stayed right with me. She didn't go to the house until I did. Now we have a bunch of dog rugs, sleeping off the heat.

Baymule said:
She didn't go to the house until I did.
Click to expand...

Yes she does. BJ is in charge of feeding the dogs. He goes through his routine with them, feeding them in their certain spots, catering to their idiosyncrasies. Sheba eats under the table, Sentry next to the table, Trip eats on the porch, Carson goes under the porch until Sentry goes outside, then he comes in to eat at the end of the bar. Paris eats in her backyard, but won't eat if she hears thunder. If Sheba runs ahead of me to the house, she keeps looking back to see if I am coming too. If I stop, she runs back to me, so I have to walk her to the house. BJ can call until he is blue in the face, but I have to walk her to the house. LOL LOL

But she does love BJ if he has potato chips or Cheetos.

Heck, I'd love him too for some salt and vinegar potato chips (with a beer)!

My crew know who the boss is - and it's not necessarily the guy who feeds 'em. But, I do appreciate DH's help!

Your dogs are spoiled rotten, Bay!

I took pictures! Sheba and Sentry were in the pasture with Ringo and a couple of ewes, checking things out. 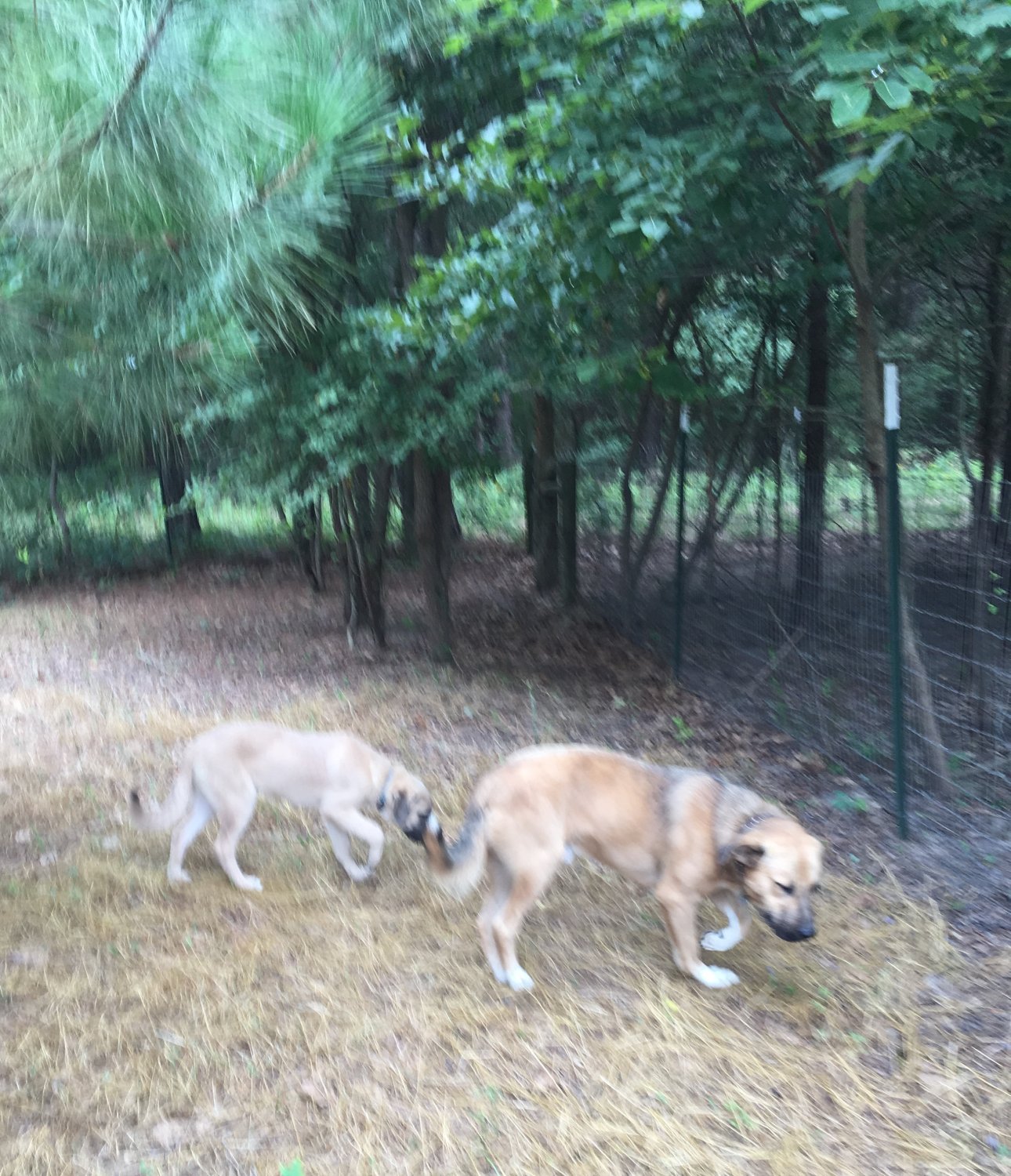 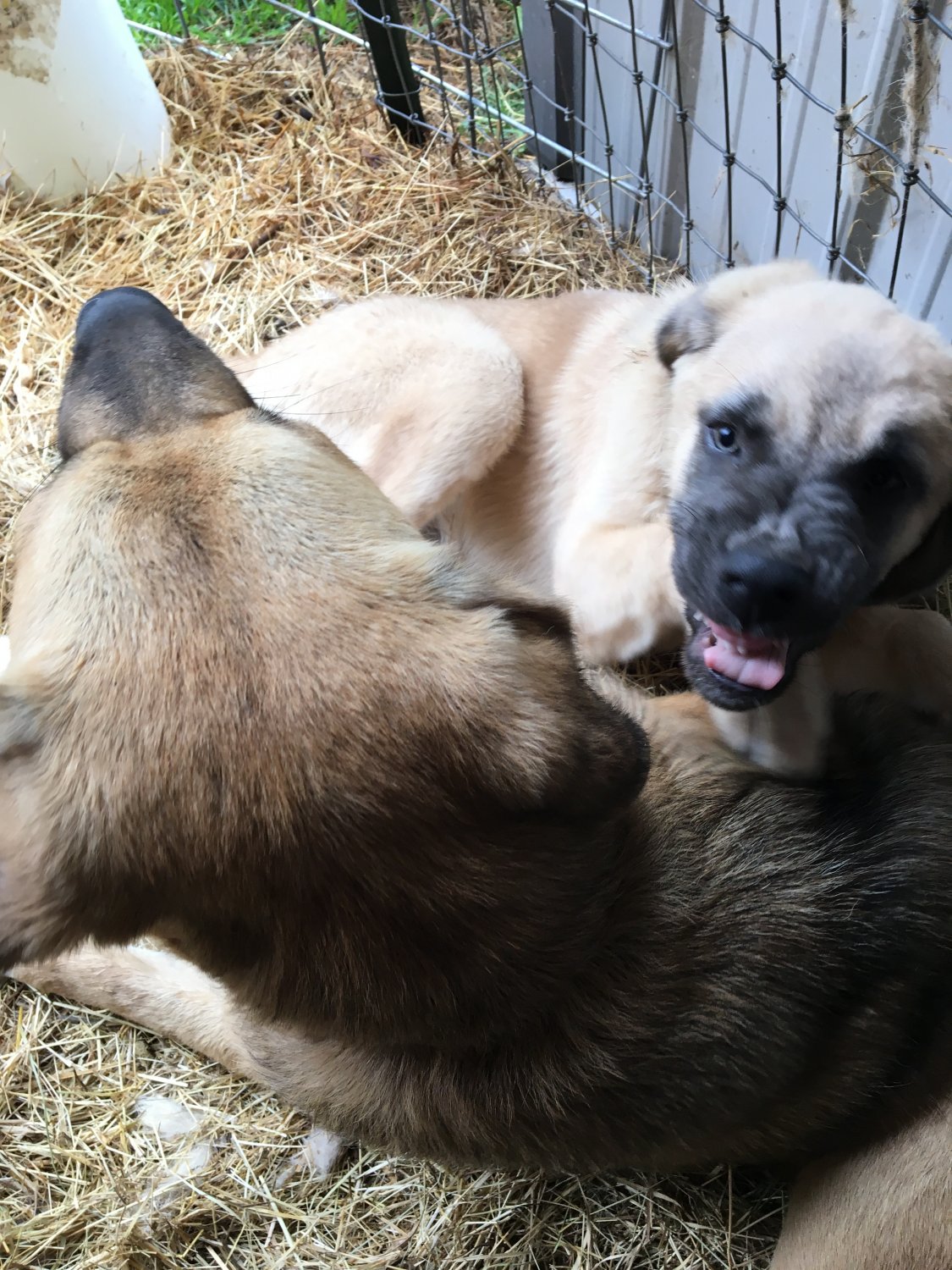