Teresa is putting up some more pickles this morning. With just the two of us we usually go through around 10 quarts a year so with the 7 she is processing this morning and the 5 still left in storage, we are about finished with doing pickles for this season. The neighbors are liking us getting through with most of our canning this early since the summer garden that is left is still doing well.

We also use a lot of bell peppers so we grow and freeze a lot. I chop them up and freeze them on a flat before vacuum sealing plus I'm going to dehydrate a batch to grind up for seasoning. I did a small batch already but I have already used much of that. We will also dehydrate some chopped cucumbers to grind up to use in sauces this winter.

I have lost track of how many tomatoes have put up but we use a lot and never seem to have quite enough from one season to the next. We bought a bushel last year at the auction but haven't needed to do that this year.

I have been lax on my picture taking this garden season as it seems like it has all been seen before. 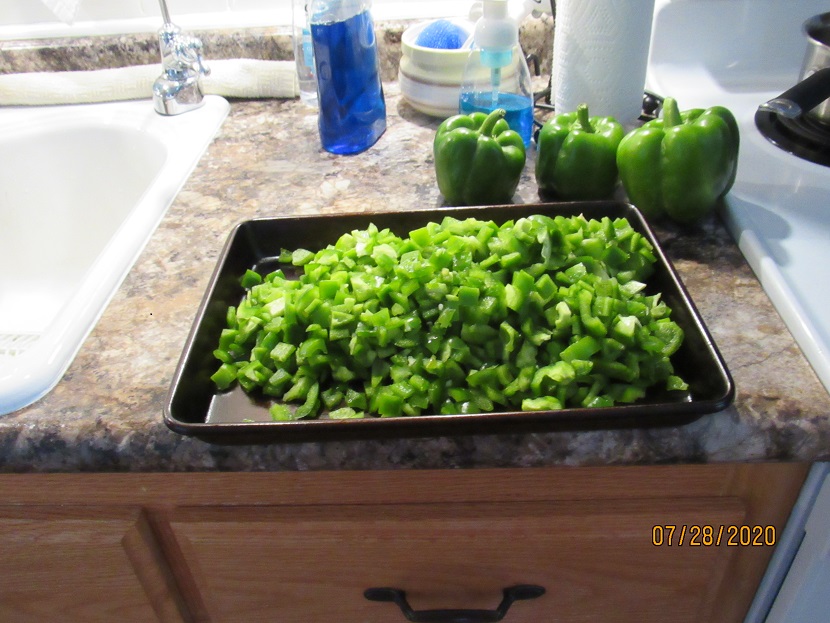 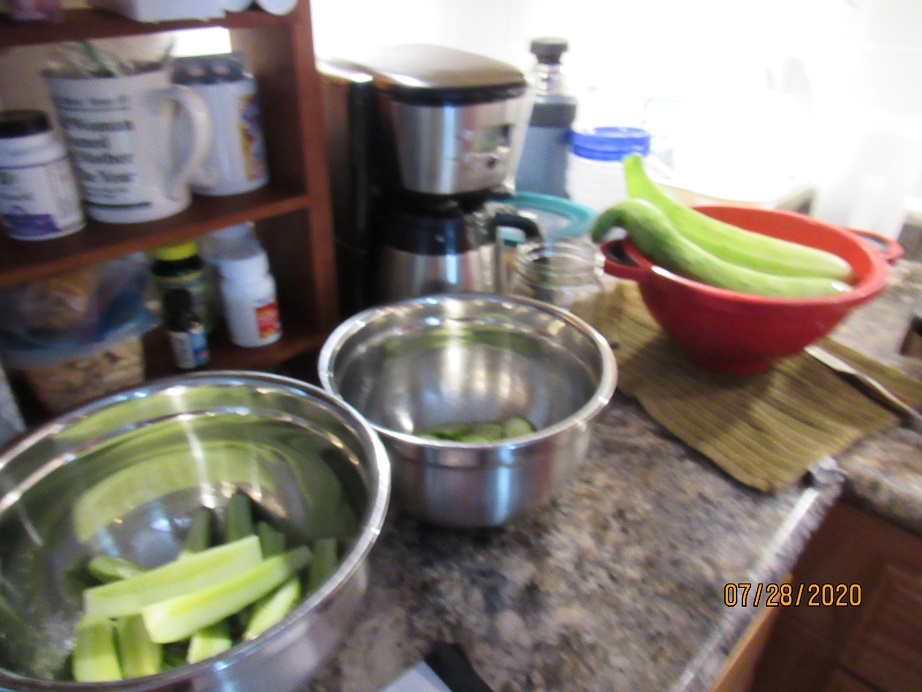 I did something to either my back or my hip a week ago last Sunday. I had 3 or 4 days where walking was extremely painful and carrying anything without support wasn't going to happen. I have been through the back treatment before so I won't go in to see what they can do until I have some history to even talk about to the doc. It has gotten a bit better and I can walk without dragging my left leg but it seems to want to give out although I can usually feel it coming. Teresa at first thought I was being stubborn not going to the doc but having a lot of history with back problems and surgical history I will go when I think something might be accomplished.

This all started two days after working the sheep last but also two days after I got knocked on my rear again by hitting the top ground and hot wire while I was weed eating around a gate. I landed on the hip area that hurts so that is likely the cause. I'll give it another day or so to see how it is working and then go see it looked to. I tried the inversion table one day last week but that put me in a chair doing nothing so no more of that. I'm not looking for sympathy but I have been posting less lately and wanted to say why.

if ya need relief, ya should try the Salonpas Lidocaine patches...Joyce uses them often and swears by them....she has nerve issues in the hip back area and it runs down her leg and at times drags her foot when it is really bad....the Doc told her he couldn't do her any good until she couldn't lift it any longer....so, she is making do the best she can when it acts up.... ....hope it gets better and not a cracked pelvis...

We use something similar and it does help.

Holy cow, Mike! I hope you get over your pain issues! It is hard to enjoy working on the farm when you can hardly move.

Maybe a chiropractor or massage therapist?

I have a wether in with the ewe lambs and the dogs that is putting some serious effort into not going to the butcher. When I'm out feeding the dogs, I take a bucket with me to sit on while the dogs eat. Pete (the wether) will come up and lay his chin on my leg so I can scratch his ears. He is always the first one up and he would rather get petted than go to the feed. He has worked really well at getting the lambs tamed down since they follow him around and mimic his behavior (which is always calm). He was one of the lambs that ran with the dogs when they went on alert and ran to the fence line with the dogs. He still does that but is starting to stay with the lambs when the dogs go out.

Every place needs a "mascot" and being a "trainer" oughtta count for somethin'.....

Pete isn't going anywhere soon. It's funny since he was a runt when we were putting on ear tags to take a load of lambs for processing with most being around 3-4 months old. Pete was a runt and as I picked him up to do the ear tag I saw that he was plenty small enough to go ahead and band him since we didn't have any that were prepped to band and butcher. He kept our ram Max company until we were ready to start breeding again and he is taking care of the lambs so he has no worries.
You must log in or register to reply here.
Share:
Reddit Pinterest Tumblr WhatsApp Email Link