My grandmother passed several years ago at 98. She said for the last year or 2 that she was more than ready to go, but her heart was very strong and wouldn't quit. She lost her sight to macular degeneration in her early 90's, it just kept getting worse and worse, and that was really the "end" for her. She said everyone in her "group" was gone so what was the reason for her to stick around. Tried to get her to do some tape recordings about the family tree and stuff and she refused. I've tried to write some of it down, but don't have alot of it. My father is the next generation, and he won't record stuff either. It is a little hard to do it when you are 500 + miles away.... So much was lost with my grandmother.... she refused to let anyone record her voice... said it sounded terrible... but most all of us don't like the recorded sound of our own voices as it is different than what we "hear" when we are actually talking.
Her mother was 89. My grandfather was 87 or 89. his mother was 94 and her sister was 102 or 104.... she broke her hip 2 years before she passed on.... There are some families like your wife's, that are just long lived. It is nice if they are still mentally "with it". The font keeps changing on here for some reason.... GRRRR .... this computer drives me nuts... I am trying to find the one I normally use....maybe I won't get it. Maybe it will reset it's self when I turn it off...maybe it is the size?????

It is always sad when an elder member of the family passes away. So much is lost with them, a lifetime of accumulated knowledge, memories of great times and the love they freely gave. Teresa was fortunate to have her aunt for such a long time. Longevity runs in my family, I'll be around for a long time. LOL

We'll try to stick around with you Bay


farmerjan said:
It is nice if they are still mentally "with it".
Click to expand...

Yep and all of DWs "elders" were with it to the day they passed other than the aunt that was married to FIL's oldest brother. Her Dad and surviving aunt still have 100% of their mental faculties. My Dad's father had dementia for years. Short term memory shot many, many years before he died a couple of weeks shy of 96. Other than somewhat bum knees from years of farming he never had any medical issues.

I ran across an oddity in the garden today. I am pushing 70 and have been picking okra since I was 5 years old with my Grandma and have never seen a double pod of okra on a single stem. The attachment at the base is oval rather than the normal round shape so it looks like the two stems were joined where it originated at the plant stem. 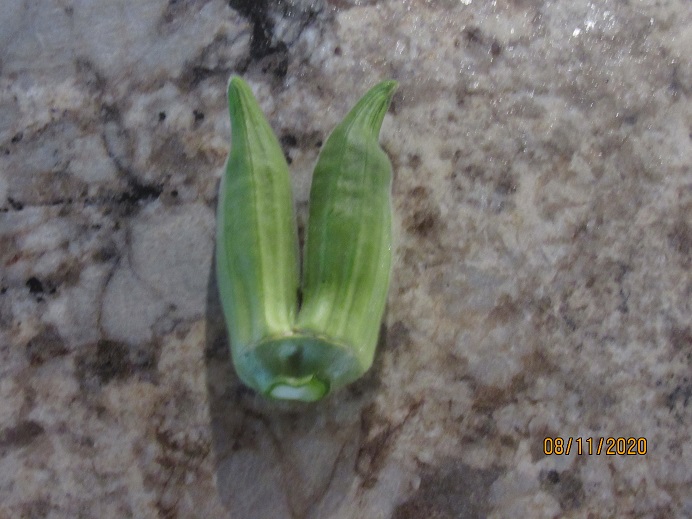 We had rain showers all around us today but not a drop fell on us. We normally have semi drought conditions this time of year but not quite this bad. We have been keeping the sheep on a pretty fast rotation so even with the lack of rain, the grass is filling in with no problem so far. Our numbers seem to be just about right now since none of the adults are getting any feed and they are holding condition very well. I have 2 of the 18 breeders that I'm not sure are bred but the rest definitely are. None of these girls are first timers and every one of them had twins or trips last season and we will start dropping lambs in November. We will figure out the status of the 10 ewe lambs later on but they are doing very well on grass.

Maxwell did himself proud again but since he only had 18 ewes this time instead of the 30 he had last time, we would expect that to not be a problem for him. Ringo managed over 30 ewes and never even got winded. You can tell by his body score that he hasn't had to work very hard and if anything, he has put on more weight since going in with the ewes. It looks like we might be swapping Maxwell with a ram that originally came out of Tavalin Tails Farm just north of Nashville that is now owned by a good friend who is also our UT Extension Agent. It's a good swap since both rams came out of NSIP programs and are within a month of being the same age. That swap should happen in about a month from now (assuming it happens). If nothing else I won't have to spend two days on the road to bring home another ram. We only run a single ram since our setup doesn't accommodate more.

I had my PT this morning and am happy with my therapist. I got more information about what's going on from him that I did from my doctor by a long shot. Most of the therapy was chiropractic in nature and I lost a lot of the pain so I'm happy.
F

Mike CHS said:
I ran across an oddity in the garden today. I am pushing 70 and have been picking okra since I was 5 years old with my Grandma and have never seen a double pod of okra on a single stem. The attachment at the base is oval rather than the normal round shape so it looks like the two stems were joined where it originated at the plant stem.

NEAT. Saw a picture today of 2 cukes that were joined from end to end, but were 2, that like fused together.

That's good news on the ram swap. Best of all is no long trip to get another ram. Isn't it great when something works out like that? Of course you know we will be waiting on pictures! Are you keeping any ewes from Maxwell?

That is good news on the pain relief too. I'm glad that you are seeing a good therapist and getting what you need to feel better. We drove halfway to Odessa and back yesterday, to get our granddaughters and will meet again on Saturday, so BJ's hip was "talking" to him before we got home. LOL He really doesn't want to go through another operation and the months of recovery and therapy, but pain is becoming a motivator. He is getting closer to the idea of seeing the doctor.

We kept 10 ewe lambs out of Max but still haven't firmed up that they will all stay.

I hope BJ makes that decision sooner rather than later. I have only had two surgeries in my lifetime but the thing that really sticks out with both of them is that I had wished I had done it a whole lot sooner than I did.

I made a run down to our feed store this morning and while I was gone, Teresa put the squash bed to rest. I'll add some composted manure and then get it ready for some fall veggies. We have enough squash put up to last us through the winter so a lot of this will be shared with a neighbor. She has been out of work for a couple of months due to a fall/injury so they like getting the veggies. 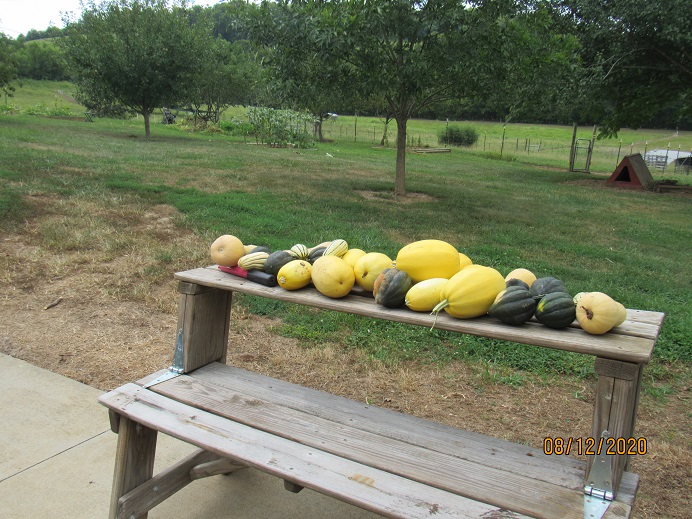 Here is a picture of the ram that we may be trading for. Matt is just finishing up breeding also so it works well for both of us. We were going to wait until later in the year but we will still have the wether to keep him company and I expect we will have several lambs to wether for meat next spring.