Hopefully the lull in lambs is over or at least I hope so. The ewe that we used to call Wild Thang had a ewe lamb this afternoon I picked up the lamb and got them moved into the nursery pen. I didn't even sex it since I had to keep my eye on the ewe. Most of our ewes will quietly follow me when I move their lambs but this girl constantly rubs her head on my hip while she is deciding whether or not she can get by with a head butt to get her baby back.
Last edited: Dec 4, 2020

I cooked some Delicata Squash sort of like chips that turned out really great. I cut them fairly thin and added some olive oil, sea salt and pepper and shook to mix then baked them at 425 degrees. I baked them till they looked almost burnt and they were tasty. We haven't had any potato chips for a couple of years so it was a pleasant treat.

A "just because" picture. Mel and Maisy have gotten back into a good routine now that they have sheep to watch over again. One of them will stay wherever the sheep are as the other will go out and check things out. 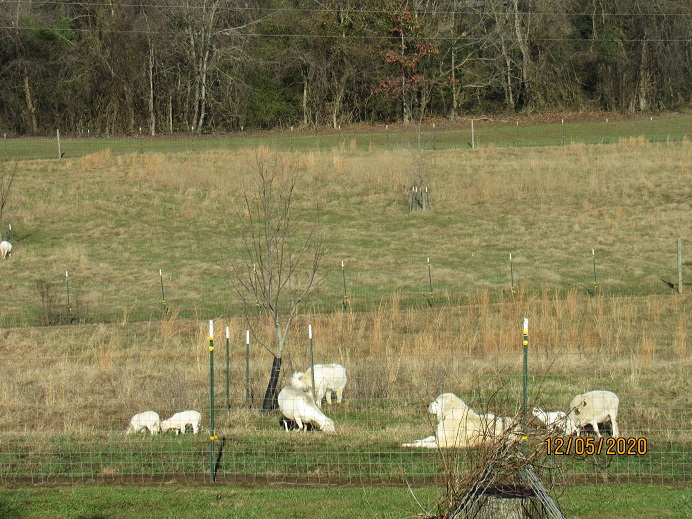 I love the way they "assign" their guardian chores in shifts. The dogs will "talk" to each other about their duties somehow. I remember coming out 6 months ago to find all the sheep clustered around the field gate with Angel sitting bolt upright staring into the gully. She remained that way for about 15 minutes. Then she got up and starting getting happy - Rika appeared out of the gully, they touched noses and stood a moment that way. Then Rika ad Angel walked into the gully together leading the sheep down. Obviously, Rika as ranking pack member posted Angel to guard the sheep on the top of the gully while she reconnoitered. Angel was still only 18 months old - a puppy - but old enough to watch the sheep in a safe spot while Rika dealt with any threat. A real teaching episode by a senior dog to a puppy that I was privileged to see.

I always know who has the majority of night duty - they go missing after morning feeding time. All 3 dogs greet each other and play a bit then settle into the guard routine. One stays up on the hillside overlooking the gully, one disappear to get some sleep, and the other settles wherever they have a good view of the area they feel needs the most protections. We can even drag the sleeping LGD around by the tail and it stays asleep BUT a warning bark from the ones on guard has the sleeper on its feet ready for battle in seconds!

Usually all 3 will be on guard at night during a period of predator activity (which is happening again now). Unfortunately Rika and Bubba will be working harder than usual since Angel is in season again and on vacation at the boarding kennel. I planned to have her fixed but was dissuaded hoping to get her registered and have a litter. But boarding is expensive and she is out of commission for 3 weeks every 6 months!

We need a thread where we can post these episodes as we witness them!

Mike CHS said:
The ewe that we used to call Wild Thang had a ewe lamb this afternoon I picked up the lamb and got them moved into the nursery pen. I didn't even sex it since I had to keep my eye on the ewe. Most of our ewes will quietly follow me when I move their lambs but this girl constantly rubs her head on my hip while she is deciding whether or not she can get by with a head butt to get her baby back.
Click to expand...

Do you have to put up your LGDs to move the ewe and lamb? We have to put Bubba up when we transfer sheep, particularly ewes with new lambs, since he really objects to us moving them from his territory to a new spot. It is very annoying and if we forget to put him up or in the house, he chases the ewe back to her previous location. He also tries to steal the baby.

I am rethinking his behavior. Perhaps he does not want us to move her from his area (where he can watch her and knows there are not dangers) into the barn where she might be exposed to new dangers he has not checked out. Also I wonder if his trying to take the lamb - which includes him trying to grab it with his mouth out of our arms - is his way of trying to return it to the ewe who is circling behind us bleating. I will consider this possibility and discuss it with Erick. Once the ewe and newborn are safely in the jugs, Bubba is calm and lays down right next to the pens. If the ewe lambs in the open field, he is calmer and unless we try to move the ewe he just waits near her.

Anyone have any thoughts on this? Remembering that Bubba is a male Anatolian with a very high protection drive who adores lambs. Rika and Angel also want to guard the ewe and lambs but will allow us to move the ewe. If Bubba is interfering, Angel gets excited and rushes with him. If Bubba is removed or penned, neither bitch interferes, but follows the ewe to the new location, checks it out, and returns to their duties.

Have you seen this behavior Mike?

I was still working on the tree line encroachment as it was getting dark this afternoon so Teresa looked up a recipe for one of her favorite dishes which is Cod Puttanesca or actually any seafood Puttanesca. She had dinner ready when I came in and this particular dish is one that she has always asked me to make because she thought it was pretty complicated. She did mention that I had her fooled all of these years over dishes like this since they are so easy.

@Ridgetop you are right about it being a privilege to watch these dogs work! Sheba is starting to see hawks and buzzards as a threat to the chickens, I've seen her looking upwards at them.

Trip loves the lambs but is OK with us moving them or picking them up. Sentry is the same.

Mike CHS said:
She had dinner ready when I came in and this particular dish is one that she has always asked me to make because she thought it was pretty complicated. She did mention that I had her fooled all of these years over dishes like this since they are so easy.
Click to expand...

Alas! Mike. you may have lost your reputation as the chef of complicated dishes! On the other hand, any time my men want to cook for me I am happy to have them do it. Teresa is probably the same. Being able to cook together must be a lot of fun. I am pretty much the only cook in this household so any man that likes to take over the cooking chores is a hero to me! I have been cooking for a family of 6 ever since my mother went to work when I was 15. I would look forward to retirement but there is none for women.

You know the old proverb "A man must work from sun to sun, but a woman's work is never done."

@Baymule - Our Pyrs were fine with it too, although that may have been because with dairy animals they are moved twice daily to the milking parlor. Probably it is just Bubba, sigh . . . .

So glad to hear that Sheba continues to grow into her guarding potential. You are right about the large birds, our Anatolians used to chase away ravens, hawks, etc. Glad that in spite of Sentry's health issues, he is also doing well and has become a good guardian. Good old Trip and Paris (crazy though she may be) are good role models for them to follow and learn from.

Sheba has grown bigger than poor stunted little Sentry. She now bulldozes him, grabs him by the nape of his neck and shakes him. She grabs a hind leg (NO Sheba! Not the bad leg!) stretches it out and knocks him down. She does the same with his front legs. I find tiny bite marks on him where she played too rough. He falls down, probably to minimize damage, but she wools him like a rag. When he finally gets enough, he fights back, but it is a losing battle. I marvel at his patience.

I need to take a few pictures this morning. The ewe we call Notag must have been holding her twin ram lambs in waiting on me to get there. Just kidding of course but this is the third time in a row that she had twin lambs while I was out with them. They are moved down to the nursery paddock already.
You must log in or register to reply here.
Share:
Reddit Pinterest Tumblr WhatsApp Email Share Link