I've come up with an area to start with pigs next year. If training them to the electric goes well I have alot of wooded areas I'd like to use pigs to help clear out, in future years. My plan next year would be 4 pigs from weaner to butcher. The neighbor just started raising pigs so hopefully I can get them from him. That would make it really easy. I haven't seen his pigs yet so I don't know what breed/s they are. Not a big deal to me though, I'd rather not need to buy from the auction.

The picture is a zoomed in aerial view of my sheep permanent paddocks. The red lines are permanent fence, the pink lines are gates. Center yellow square is the proposed 16x16ft hog pen (hog panel). 16x11ft of that will be under roof. There will be a gate on two opposite sides for ease of rotating within the paddock. The yellow lines are the hypothetical electric wire divisions. I made the divisions as wide as the pen, then however long out to the fence. (Est 16x20= 320 sqft) 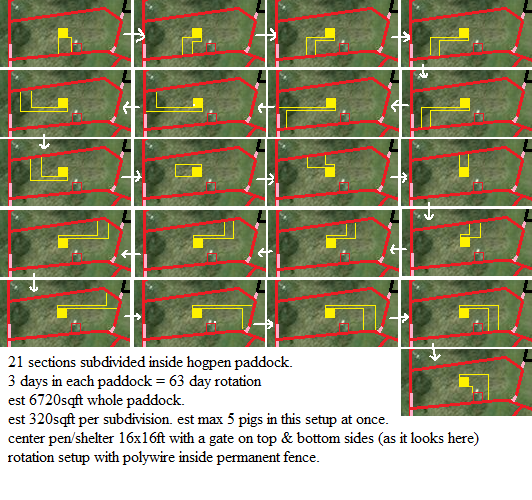 Estimated 6,720sq ft paddock, 21 divisions. In the picture I tried to make it as to-scale as I can estimate it to be. Each division is drawn to be 16ft wide then out to the fence and back around.
I have a seed mix for spring/fall: essex rape, purple top turnip, daikon radish, spring pea, everleaf forage oat, clover. I have alot of it to overseed my sheep pastures and I got extra. This can be planted about April 20, about the time I'd be getting piglets. It will be ready to graze in about sixty days, by seed catalog suggestions. Which gives me until about June 20 to get the piglets started and trained in the pen to the electric.

Just for simplicity, if each division is equal that would be est 320sqft each. I'd need sixty days for another round of seeding so average 3 days per division makes 63 day rotation. Behind the pigs I would be planting, I don't know yet... I thought some corn but if its taller I wouldn't want them knocking it over the electric division wire. I don't know how much of the mix would try to grow back, and it will depend on how hard the pigs hit it. I understand this is hypothetical timeline and with pigs here in reality it might be shorter or longer.

So the first time around puts me at Aug 22 starting the second round. By this time I can start planting the mix behind them. Until about end of Sept/ early Oct when they'll get butchered. A full second rotation would last until almost end of October so depending on actual butcher date I could do bigger divisions then. Of course bigger pigs, probably same size divisions and move them quicker.

In the winter this paddock is easiest to access and will then be my winter sacrifice go-to for the sheep until right before lambing starting end of March. Which coincides right with getting it ready for the pigs and starting the cycle again.

**With this kind of forage for the pigs how much would you expect to help with feed intake? Do you always give full feed even with high forage?
**I'd like to feed a grain mix and soak or ferment it. If I can get the grains reasonably priced I can have it cracked for me as needed fairly easily. If the grains are prohibitive to that I'll be using regular hog feed and soak/ferment some cracked corn for them. Along with food waste etc usual slop.
**I can probably order this 39% swine concentrate to top the grains. I'm unsure what will be the holes in the feed plan I need to fill if I did the grains. Wondering if I should just go with the feed mill's hog feed next year and see how the pigs do with the forage rotation. Then at the end of the year I can review if I want to go with the grains/concentrate or something. I feel like grains would be 'ideal' but I don't want to throw all the variables in on the first year and not know the cause if something needs improved.

For the second planting- ie, behind the pigs on their first rotation- I'm considering "sweet six BMR dry stalk sorghum sudangrass". The seed info reads:
"This hybrid produces high tillering, high quality forage that has excellent early vigor. The high leaf to stem ratio means that you can count on high protien. (...) Typically this hybrid is used in a rotational grazing or 1-3 cutting system allowing you to produce the maximum amount of forage. This hybrid is more economical to plant, and produces more tonnage.
water requirement- very low
excellent recovery after cutting
first cutting in appx 50-55 days
harvest at 45-55 inches or when crop is at 50% boot stage"


With that it seems like it will be good for planting in the middle summer time of the pig cycle. And with fast growth like that I can optimize how much forage will be available to the pigs. If it tillers and has that much recovery growth I could always put the pigs on smaller sections and move them faster. Less time for rooting, less damage, hopefully let it grow back for the second rotation. It would also be a good test plot. See how it does and if it would be worth the investment of more of that seed for other areas for the sheep.
The other option I'm considering is buckwheat mix. My only worry with that is lots of buckwheat can cause photosensitivity. Maybe mix buckwheat with the above sorghum sudan and essex rape?
Here is the full write out of the spring/fall mix I have:
Essex rape- fast growing brassica. heat, cold, drought tolerant. forage produced can have 18-20% crude protein.
Purple top turnip- reach maturity in 55 days. fast growing, high yeilding.
Daikon radish- establish quickly, good ground cover prevents erosion. large roots to root up.
Spring pea- self climbing forage pea
Everleaf forage oat- true forage oat with dark green forage. delayed heading oat. dense canopy results better leaf to stem ratio.
Clover- I can't recall it was either crimson or medium red... This is mostly here for the sheep pastures which this mix was planned for.
You must log in or register to reply here.
Share:
Reddit Pinterest Tumblr WhatsApp Email Link