Hi, I am going to share a little background so ya'll do not think I am a total newbie to rabbits, just new to these forums. I have been raising NZW and SF for about seven years mostly for meat. Last year we only bred once because of family issues and our brood rabbits ate and aged. In starting back, we decided to phase out the NZW line and work more intently with the SF, but we lost both our bucks due to age and the last one just before breeding season, so we could only get three near-breeding age NZW bucks to start with plans to test breed down to two, then one. In the meantime, my SF doe was turning four so I was looking for a young doe to replace her. I finally found a breeder about an hour away, as the two closest have stopped breeding SF, and I got a heterozyogote black buck (BbDd) and a blue doe carrying chocolate (Bbdd) from her as the breeder did not have a lilac (bbdd) available. I really want a lilac (which I hope to get with these two) to bring out the recessive hidden genes of other SF offspring later on. I do not have any intention to show, but I plan to eventually work toward a show quality line BBDD blacks to sell that will only throw black as well as keep my line of all four colors.

So, that brings me to the blue doe. When I saw the blue, I was amazed by her coat. She does not have the blue as deep as I would like to see it on the hair shaft, but her coat is very thick and her fur is has that cottony or woolly feel that could knot if it were longer more like an angora (had one once as a pet). There is absolutely no roll back at all. The direction you pet her is where the fur stays...most of my Silver Foxes' fur have had some roll back, particularly the blacks but less on the blues. I LOVE her fur, but it has this lumpy look like it is not even yet it is. So my question, since I do not show to know, is this quality in the coat a disqualification for Silver Fox or is it highly desired? 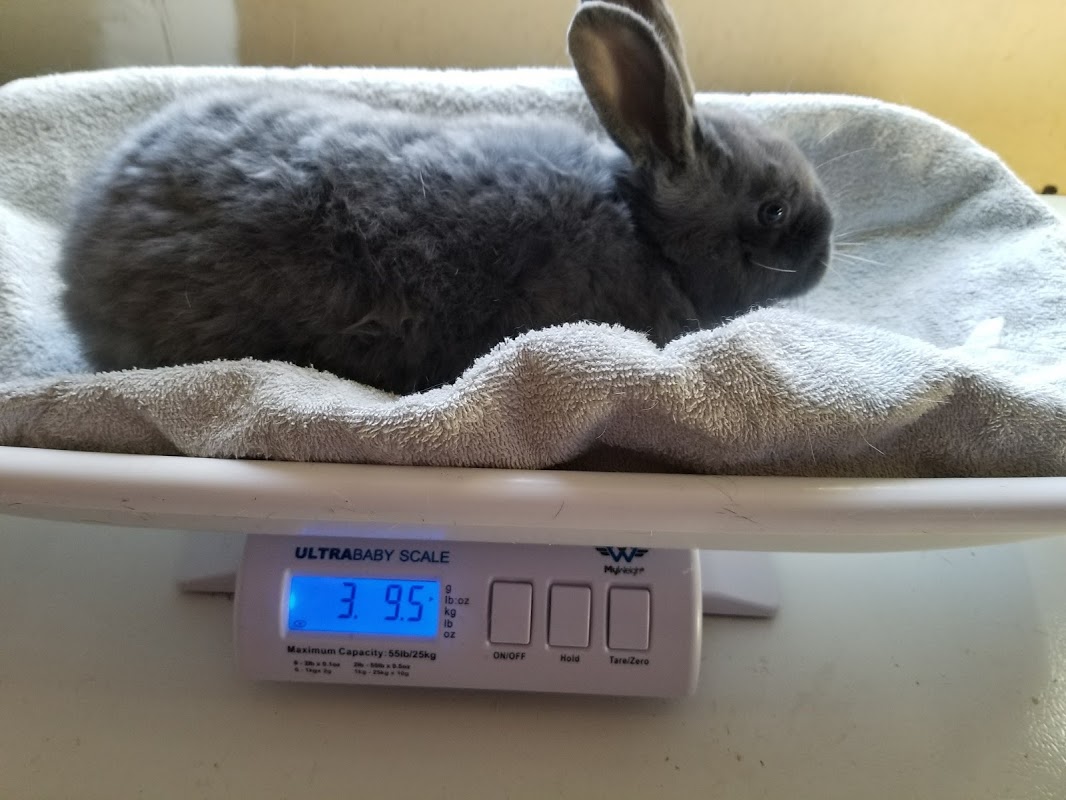 Perhaps it's a babycoat? Or I know other breeds can have a "fuzzy" gene. Sorry but I am probably not much help.
Maybe @Bunnylady might have more insight.

SF fur is not supposed to lay back down, it should stay standing when brushed backwards.
I've had some like yours, mostly went away.
I hated the very dark blues, they might as well be black at that point. =/
I see no white hairs, how old is she? Some change their coats late.

promiseacres said:
Perhaps it's a babycoat? Or I know other breeds can have a "fuzzy" gene. Sorry but I am probably not much help.
Maybe @Bunnylady might have more insight.

Thank you for the welcome and I wondered about if her coat might change as she matures, but typically my previous SFs all had about the same texture of coat with the exception of the addition of the guard hairs later on.


secuono said:
SF fur is not supposed to lay back down, it should stay standing when brushed backwards.
I've had some like yours, mostly went away.
I hated the very dark blues, they might as well be black at that point. =/
I see no white hairs, how old is she? Some change their coats late.
Click to expand...

Thanks! That SF fur is not supposed to lay back down is also what I have read, but most all SF that I have seen, until now, had some roll back but not fly back like our NZWs and even more so in the Steel I have. At least, from what I have read other breeders seem to make a distinction between the two.

(Be kind--I am still learning.) From my observations with my rabbits, once the silver guard hairs emerge, which seem to be stiffer than the rest of the coat, there is a bit more roll back. However, it is also the texture of the fur that has me wondering. Seems to catch on my hands, which tend to be a bit dry this time of year. I have not have that with any of my SFs, even another Blue doe.

I think in the picture she was around 8 weeks old and she has not yet silvered as she is too young yet.

Wish I had saved pictures to someplace other than photobucket, because I had some that silvered very early on. I remember picking out buns at 10 & 12wks at a breeder and he had freshly weaned 8wk kits in their little colonies and some had silver hairs already, too.

Photobucket betrayed me too

, seven years of posts on my personal blog that I am in the process of removing image links and uploading directly. You can go to Photobucket and download all the pictures to your PC, you can do so by file folders if you created any so you do not have to select each individually. Then you will have them to upload where you wish. You just cannot link to anything you have in Photobucket.

I also have this doe's half brother who is about three weeks older and he already has some light silvering. If she has the most ideal thick fur for a SF then