This is the tale of an "old" sheep man and his dogs.

MEG and ME: Our journey begins.

Meg is a Kelpie mix, in spite of the fact she was bred from our “straight bred” kelpie dogs.

She shows a recessive gene from her past of Border Collie, but she is her mother’s daughter and would run through the “fires of hell” if i were to ask her too. She is now about 2 & 1/2 years old and is mentally and emotionally mature enough to take on the challenge of working sheep.

Now I have 4 Kelpies, 1 male and 3 females. I have found the key to this many dogs is that you have to make each one “feel special in your eyes”.

Now I know there are those of you out there who would say she should have started a couple of years ago and when starting males this can be the case and there are lots of studs that have the pups on sheep very young, but the problem with this is you can ruin the natural working instincts of a dog by “over controlling” it in the early days.

A young dog will always make “mistakes” in the early days, try not to scold it but simply call it back to the “heel” and let it observe what you are trying to get the sheep to do.

The first step was to bring her over to the house and kennel her there where she could see me first thing in the morning and get fed last thing in the afternoon. Prior to this she had learned all of the basics like she sat and waited till I told her she could eat her food .She would sit and wait till she was told it was OK to run once the clip on her lead was released .She would sit and wait at a gate until she was told to go through .She would come to “heel” immediately she was called.

Her training started with her staying beside me when it was time for the sheep to leave the house paddock in the afternoon. ”timing is of utmost importance”, the same time each day, it also means the sheep know in advance what is going on as well .After about 3 days I brought over Max to speed up the process and I let Meg run with Max as he went about the job .After 3 days Max stayed home and it was up to Meg .Now because I always work the sheep from behind taking up a position in the middle of the mob ,it is the dogs job to “work the wings” and to guide the sheep towards the objective .On the first day I would move toward the wing and point and call to Meg to “Go back”, at first she would move some way and stop and look back to me .I would then call her “to heel” and praise her for her effort (this is of utmost importance as it instills confidence in the dog).By the 4 th day she is working right to the edge of the wing and getting the sheep to “hurry along” without getting excited herself ,if she makes a little mistake with the path out I call on her to “STOP”, and “heel” and send her out again .As the handler you need to look and point accurately as she is watching my moves to determine her next move.

The story will continue as we move to open paddock work.

P.S. I forgot to take a new photo of the 4 dogs we will correct this next time.

Your post shows the patience and wisdom that you handle your dogs with. Many of us have LGD's which can be a trial on one's patience and make one question the wisdom of ever getting such a hardheaded independent animal. LOL I look forward to more posts on training Meg.

I’m thinking in the down the road, that I will be getting an LGD...so I’ll be reading this thread for tips!

Thanks for starting this thread on how you work your dogs. Watching herding dogs do their job has always fascinated me, it's nice to learn how a shepherd trains up a good dog.
W

I can't wait to see pictures!

I LOVE to see the herding dogs move sheep. Someone posted a video many moons back, showing hundreds of sheep being moved meticulously by a few herding dogs. What a beautiful sight!

Obviously, they are different from LGDs but, both have their "jobs". At a TX farm once, I watched the herd dog pull out THE animals wanted, from among a large group. Awesome! The actually had LGDs & herders but, had to carefully contain one or the other to allow the process to happen, or the herder was interpreted as a predator by the LGD. A little dicey.

I also love to watch a great cattle horse working. If you watch they teach YOU...both dogs, horses and the animals being moved!

I’ll be following with great interest as I’m working on my own dog. I really like the presence and ability I’ve seen in kelpies. The first time I got to see one work first hand we were gathering cow calf pairs in the spring. One guy had brought his two border collies and an old kelpie bitch with scars and missing teeth. A cow turned back on them and the border collies backed away and that old girl didn’t give an inch. She gave that old cow some instruction and we never had another problem from her.

G'day folks, took this photo today.The dogs are from left to right,Max,Ruby,Tina and Meg.They all went today to "muster about 80 ewes from a new paddock,back to the one in use....As you can see they all look "pretty happy". 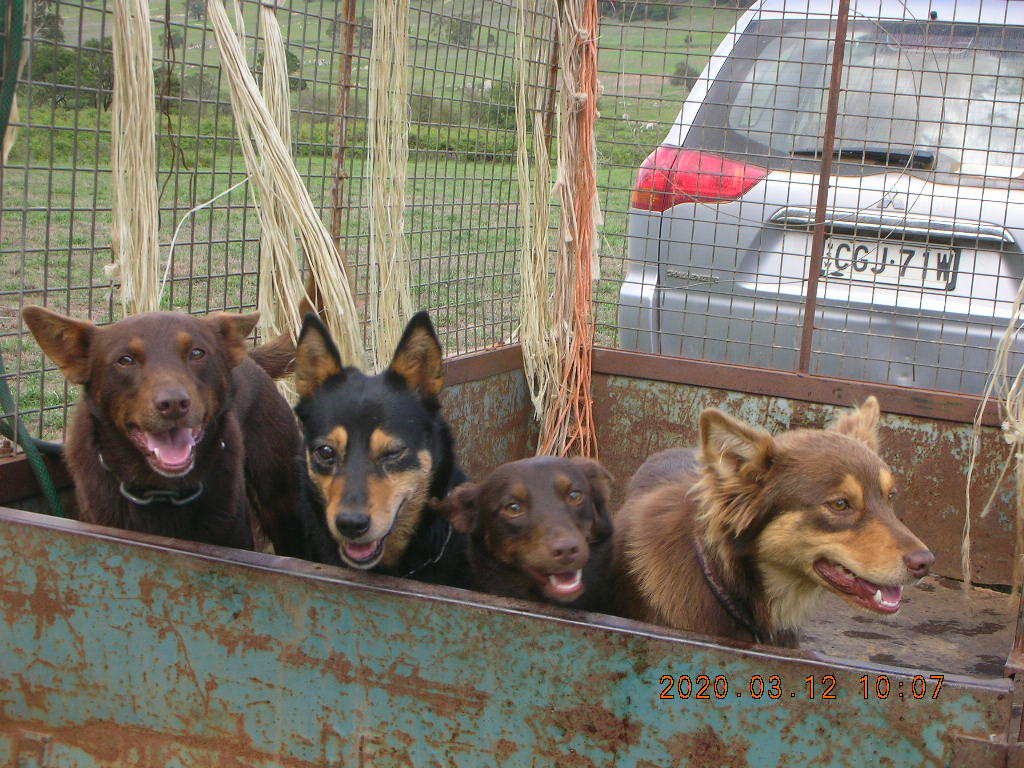 G'day folks,today was Megs first lesson in the paddock environment.You can judge for yourself just how she performed.

The photos appear in the sequence that i took them in.
P 1.Her first attempt ,she turned back before she reached the edge of the wing,because she was "unsure" of what she should do.
P 2. Sent her out again,but as you can see she was not travelling right to the edge.When she stopped and turned i called her back to me and told her "How wonderful she was ".
P 3.Now this is more like what you want .This group were on the opposite wing and she is "outside" of the way she wants them to move.
P 4. Having got the lambs moving back to the rest of the group,she is "distracted" by a strange smell.Gave her a moment and called her "to heel".
P 5.This is great,she is heading right to the edge of the "wing",and the lambs have seen her coming and are hurrying back to the main group.
P 6. SUCCESS.once they were on the move she "came off them"and returned to me on the call.
P 7. Out to the other wing to keep them all moving towards the gate.Stopped for another "smell.

This paddock was about 5 acs,and the mob was about 80 strong ,made up of ewes,rams and mostly lambs.

I am well pleased with this first outing. Hope you all enjoy.T.O.R.