That was "breath taking" just reading about it....I have "dreamed" of such while watching many westerns as I grew up, but never had "what it takes" to make it a reality....

.....Clint Walker as Cheyenne Bodie was my favorite....

I'm so happy for you that you can enjoy riding the trails on a horse you love!

I'm not sure I would even walk that on my own 2 feet.
Great job both of you.
Click to expand...

farmerjan said:
Quite a compliment to you for the job you have done training her. That sounds like a ride for experienced horses.... so real good job. Bet it was beautiful.
Click to expand...

CntryBoy777 said:
That was "breath taking" just reading about it....I have "dreamed" of such while watching many westerns as I grew up, but never had "what it takes" to make it a reality....

.....Clint Walker as Cheyenne Bodie was my favorite....
Click to expand...

Senile_Texas_Aggie said:
I'm so happy for you that you can enjoy riding the trails on a horse you love!

Thanks all. Sometimes I am just amazed and in wonderment at the quantity of blessings that overflow my cup. Not just my horses and living where I can enjoy spectacular rides, but all the other elements of my life at this point. After I showered the night of that epic ride I started counting my blessings....clean hot water on demand, a clean towel, a house with four good walls and a roof that keep us comfortable in all sorts of weather, a good man that loves me and takes my good and bad generously, two kids who like to hang around with us....well, the list is endless. God is good and merciful and loving, all good things are from Him and I am so grateful.

I just have to tell you and thank you for getting my interest into riding again peaked. As soon as I can get my leg up in the stirrup and up into the saddle Kupid and I will be off on well needed ride. ❤

Yeah, get out there and ride!

(did you notice the emoji horse is a bay?)

How's your back doing these days Shannon?

thistlebloom said:
Yeah, get out there and ride!

(did you notice the emoji horse is a bay?)

How's your back doing these days Shannon?
Click to expand...

Oh it's way better. Still hurts by evening and hard to sleep a full nights sleep. I find myself trying to do more than I should be and pay for it later.

We are making progress around here. Incremental maybe, but at least it's the right direction

.
The hay tube is history. Dh and I got the CP framework all disassembled and the CP's stacked. A few days later I cleaned up the pallets and stacked the keepers and made a stack of the beyond hope burnables. I only found one mouse when I lifted the pallets up. Those two cats of ours are certainly earning their keep and then some. Last year I would lift a pallet, mice would explode out, I would scream and then stomp. I can't help the screaming, it's completely involuntary. But when they charge all directions and run over your feet....shudder...

Saturday my goal was to use 3 of those cattle panels to expand the chicken pen. Hopefully I will be done upsizing, then downsizing, then upsizing again for the rest of my life. My awesome husband volunteered to help me and we added three sides to the existing pen, expanding it by a 16'x16' square. We cut a small hole out of the panel on the side where the new area was so they can go back and forth. It was kind of funny, the chickens were loose to range while we were working on it, but some of the new ones were still hanging out in the pen. After the hen sized hole was cut, a few were curious and stuck their heads through, looking around then stepping through like they had discovered a secret escape hatch.
We put an arch in on one side so I can grow hops on it like I have over their coop. It will give them another shady place to hang out next summer.

After that was done, and an extra gate installed for the new area (didn't figure I would enjoy squeezing through the hen hole), dh asked if I wanted to fence in the new garden area. Wow, I wasn't expecting to knock out two projects in one day! We got that done too, and it will need quite a bit of soil work and de-rocking before I can plant next year, but the fence is up.
We started at 7 a.m. and finished around noon. Not bad!

. Mr. Square Plumb and Level doesn't have a problem zip tying fencing together and jerry rigging pens when needed. He's so versatile!

The beauty of it all was that we got a bigger chicken pen and a 32'x32' (ish)
garden space and didn't spend a single nickel. All those repurposed materials have been used for chicken pens, dog runs, goat pens, and a hay tube. Hopefully we can let them rest for a bit where they are now installed and I won't mind if they stay that way for a very long time.

The log deck continues to shrink. There are 2 and a half cords split and stacked. The shed will hold 3, and the deck probably will yeild between 10 and 12. We burn one and a half to two cords a year so we're set for a few years. Dh would like to get it all at least cut into rounds and put up on pallets before winter. The stuff that won't fit in the woodshed that is.

Lets see... the blueberries are starting to ripen... 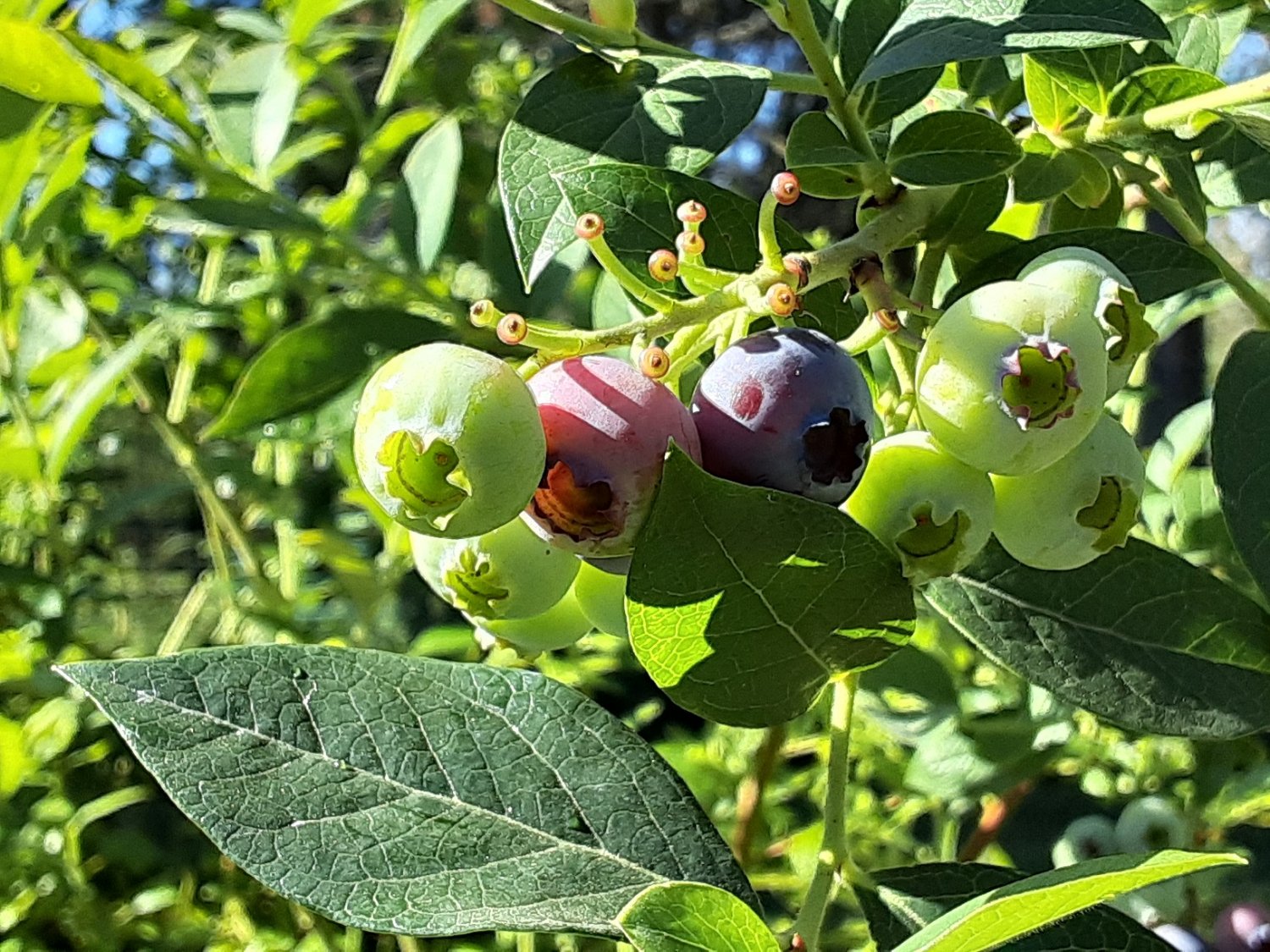 Have to keep them picked before the robins discover them. And my bad hens are not allowed to range loose again until they are finished. I witnessed them hopping up and plucking them off. Sorry girls, those are mine, all mine!

This is what I found on the trail after a ride last week when I was leading Syringa back to the trailer to cool her out. 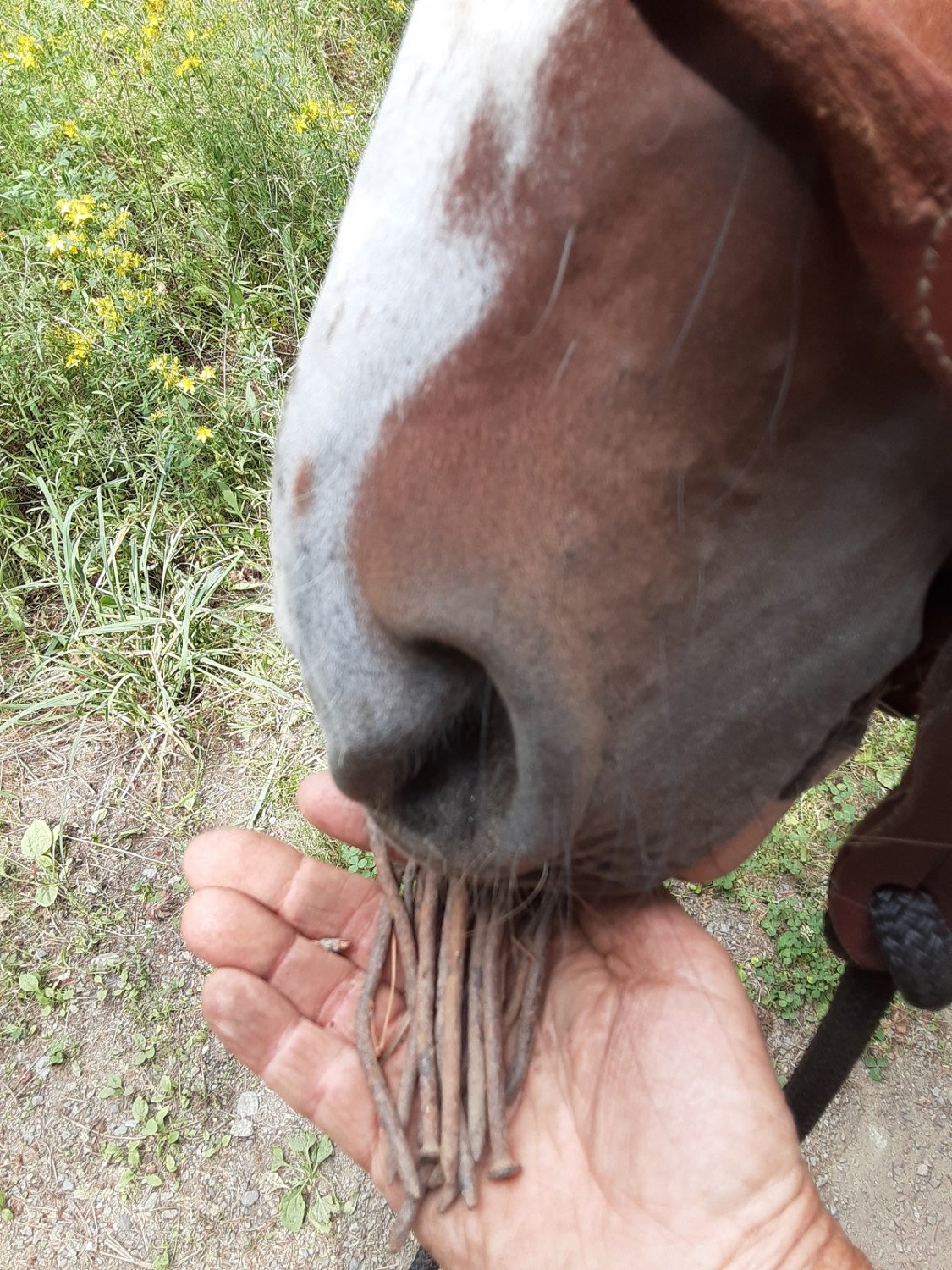 There were two more handfuls after that. It seems like someone deliberately scattered them on the trail over about 200'. Maybe more, that's just when I started noticing them. Somebody doesn't like horses and mountain bikes.
Syringa was hoping I was holding out a treat for her, haha.

And I'll leave with a shot from today's glorious ride. 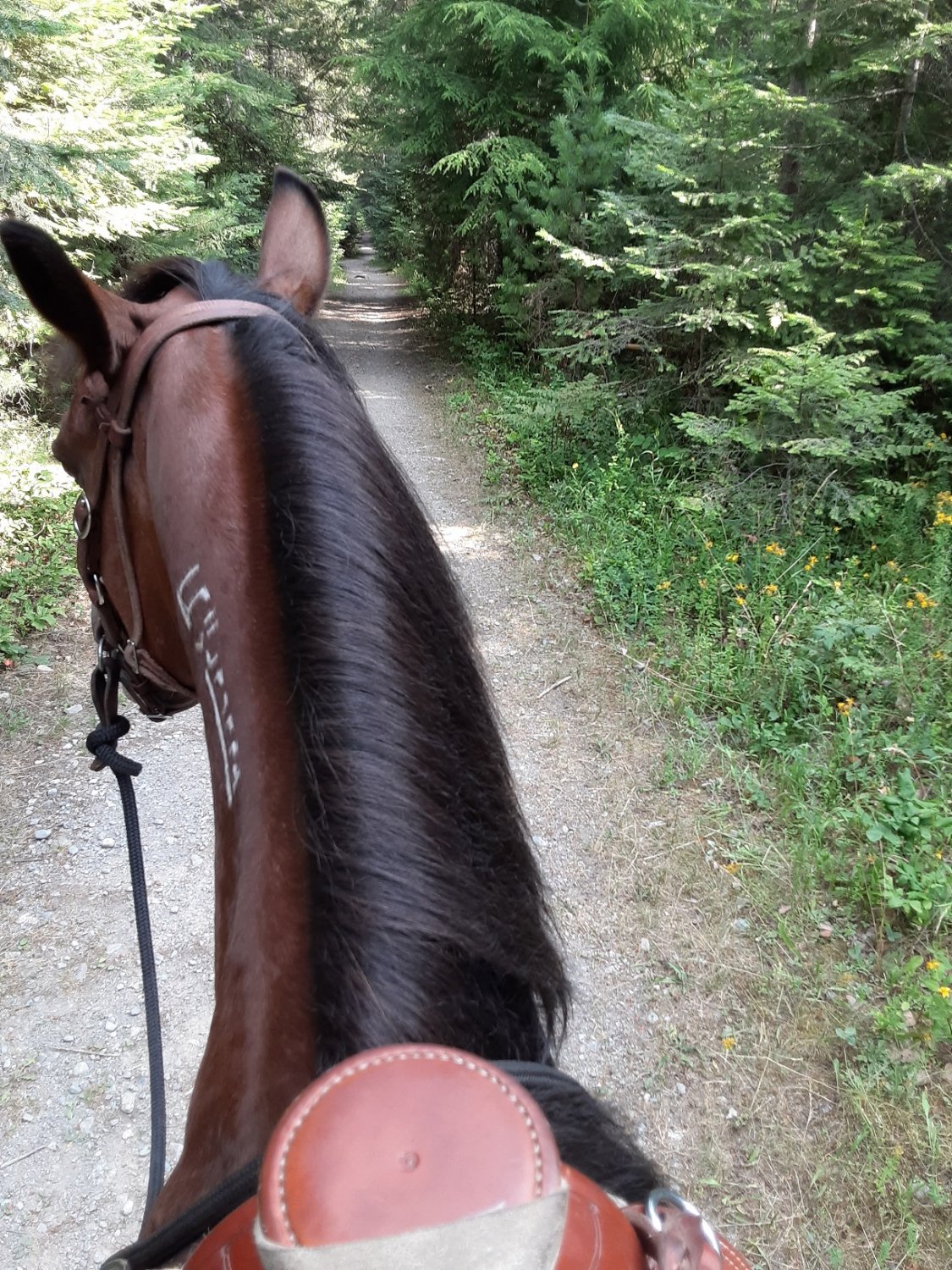 Goodness. I'm glad you noticed all the nails before your horse picked one up in her hoof.

My husband also can slap something together but look out when it's permanent. He is way too plumb and level for my nerves to watch him when he is working..