CntryBoy777 said:
And, to me anyway, it smells wonderful while burning, too...
Click to expand...

Yes, it does! Oak and maple are nice too, but not common here. Birch isn't bad, I like it anyway, and I think pine is wonderful, but we only burn that real early and late in the season, just to take the chill out of the house. A real good firewood is locust, but I think it stinks, so not something we go out of our way to find.

My husband buys Tamarack wood and Spruce I think? We also burn our Poplar trees here on our property. I'm no expert on wood. If it burns it's all that matters to me..

fantastic picture of your ride as usual. Glad your young friend knows how to fall and wasn't injured..

I quit riding rough horses. It hurts too bad when I hit the ground. I used to spring right back up, my spring is broken now.........

Looks like a great ride, it must be nice to have friends to ride with like that.

Tamarack and spruce are softwoods. They burn but they burn faster than hardwoods. Of course one has to burn what grows locally.

We are in the mid-summer slow down for my gardening business now. Mostly just maintenance and cosmetic chores. So I'm taking advantage of it and riding the hide off Syringa! Not really, but I have been trailering out about 4 days a week and loving it. The garden and yard show the effects of my distraction, and that bugs my gardener side, but not enough to squelch the rider side, haha.

Taking a ride with a friend this morning. We're doing a trail that we aren't "allowed" to do alone. Two years ago we were riding it together in the fall, me on Luke and she on her mustang, and I was excited about doing it the following year on Syringa. It took a year longer than I thought for it to happen, but it was a year well spent.

We had visitors Sunday morning. Syringa will usually give me an early wake up whinny if she thinks I'm slacking on serving breakfast, but Sunday she whinnied earlier and more often than typical. I figured something was up, so dutifully went out to give Her Majesty her hay.

There was a cow moose and two twin calves out front eating on the apple trees. Moose make horses a little anxious, so that was Syringas early warning system at work. The babies are late, they are usually much bigger by this time of summer.
(That is the new garden space btw @Senile_Texas_Aggie ) 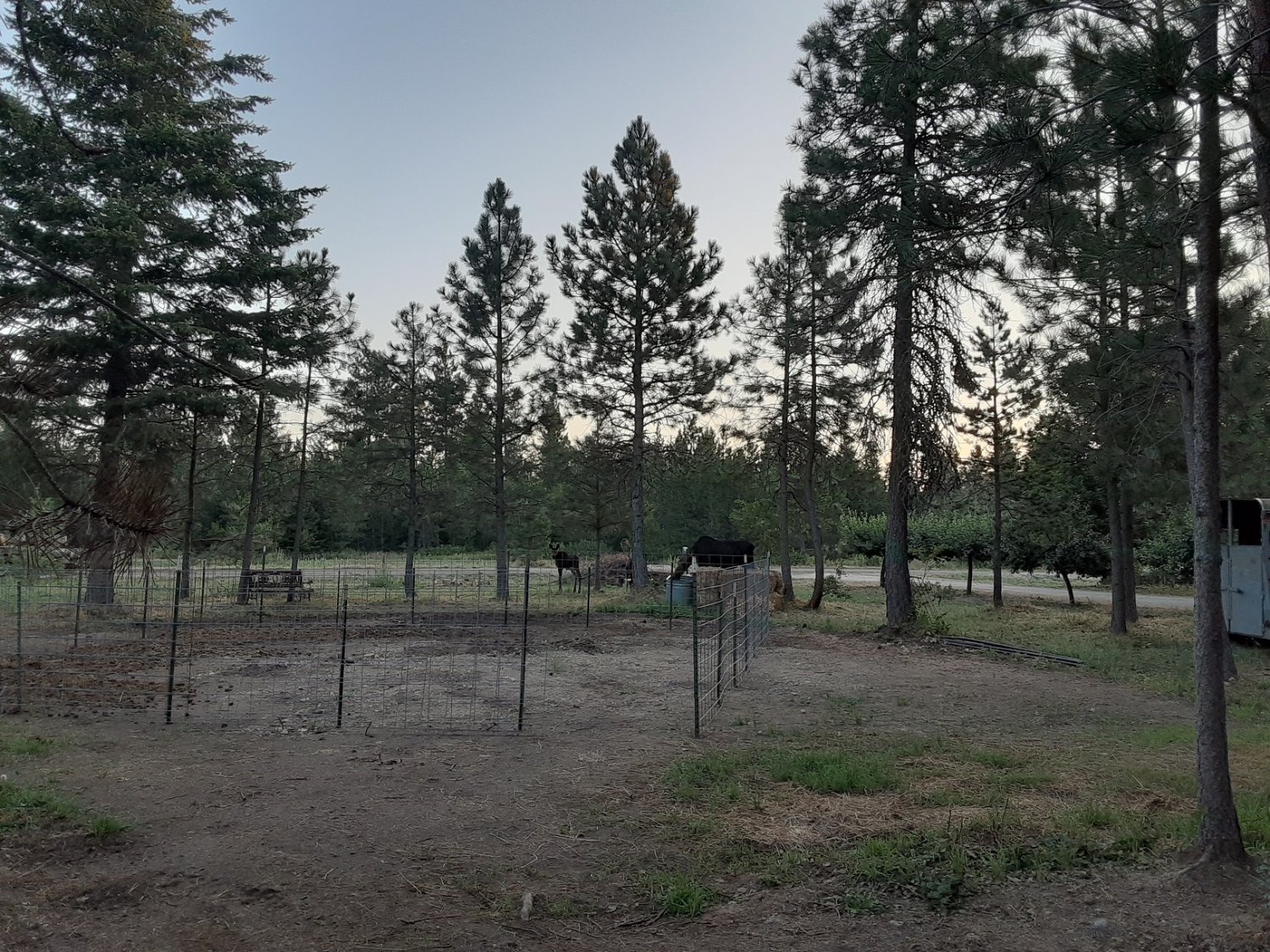 I would have preferred them to stand in a more photogenic area of the property but they chose the burn pile and there is no arguing with a moose. 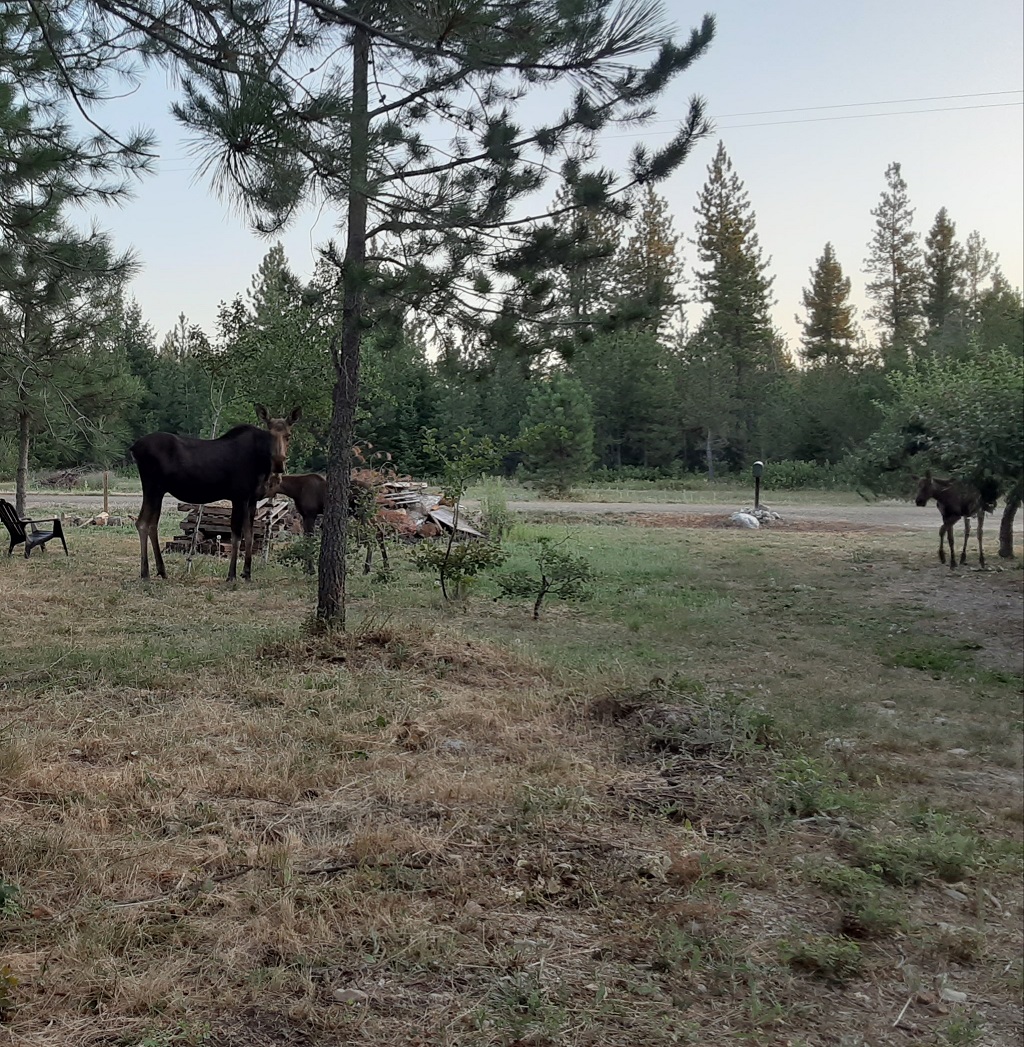 You have a beautiful place, with beautiful scenery all around. On top of that, you have quite interesting animals as well. If we are lucky, we will see an opossum or armadillo. (well, OK, maybe a few more animals...)

A neighbor a half mile away reported black bear poo on her property.
I wondered how she could tell it was black bear and not grizzly

We have them both, but blacks are more common.

Had a super ride with my friend. Got some unexpected rain showers, and the temps were perfect with the cloud cover. We did the usual trail then decided to do some bushwhacking on the way back. She had done this particular off roading a few weeks back with another friend who knows that area like her own living room. Julie and I on the other hand are sort of trail emus. But we voted for adventure and struck out through the untracked hills. We actually found our way back to the trailers after only a little back tracking, so congratulated and awarded ourselves another imaginary Trail Merit badge. The Bushwhacking Master one

.
Met a couple hunters in the woods at one point. elk cow season just opened, so we will be wearing our orange from here on out.
Our horses of course were the real heroes, they were steady and picked their footing well, even through belly high grass and brush with lots of logs and logging debris unseen on the ground.

Now I'm considering making myself useful and going out for some yard work.

Maybe horses are nervous about meese 'cause meese are BIG even compared to most "pleasure" horses.


thistlebloom said:
I wondered how she could tell it was black bear and not grizzly

There are black bears all over the place here, even in areas with more population than you would think a bear would find enough habitat.

Woke up at 2 a.m. and that was that, so got up at 4. I'm trying to be quiet while I wait for daylight. Listening to my new rooster, he has a nice crow. One of my neighbors offered him to me, she got two in her pullet order. I wavered, dh isn't crazy about listening to the crowing up close, but I don't mind. I like hearing the neighbors roosters yelling at each other, but they are just a distant sound. He's a young guy, still growing his tail, but he's very polite with the girls. The minute I put him down in the pen he found them some treats and did his little rooster dance. We'll see how it goes. I consider him on probation for the time being.

I had some neighbor kids over to do a little work. That was a ploy to get them over since I hardly get to see them anymore. The 5 boys took the limbs off four small pines our neighbor pulled. One (pine) was dead and the other three would potentially shade the new garden in the future and this is the last time I'm moving it. 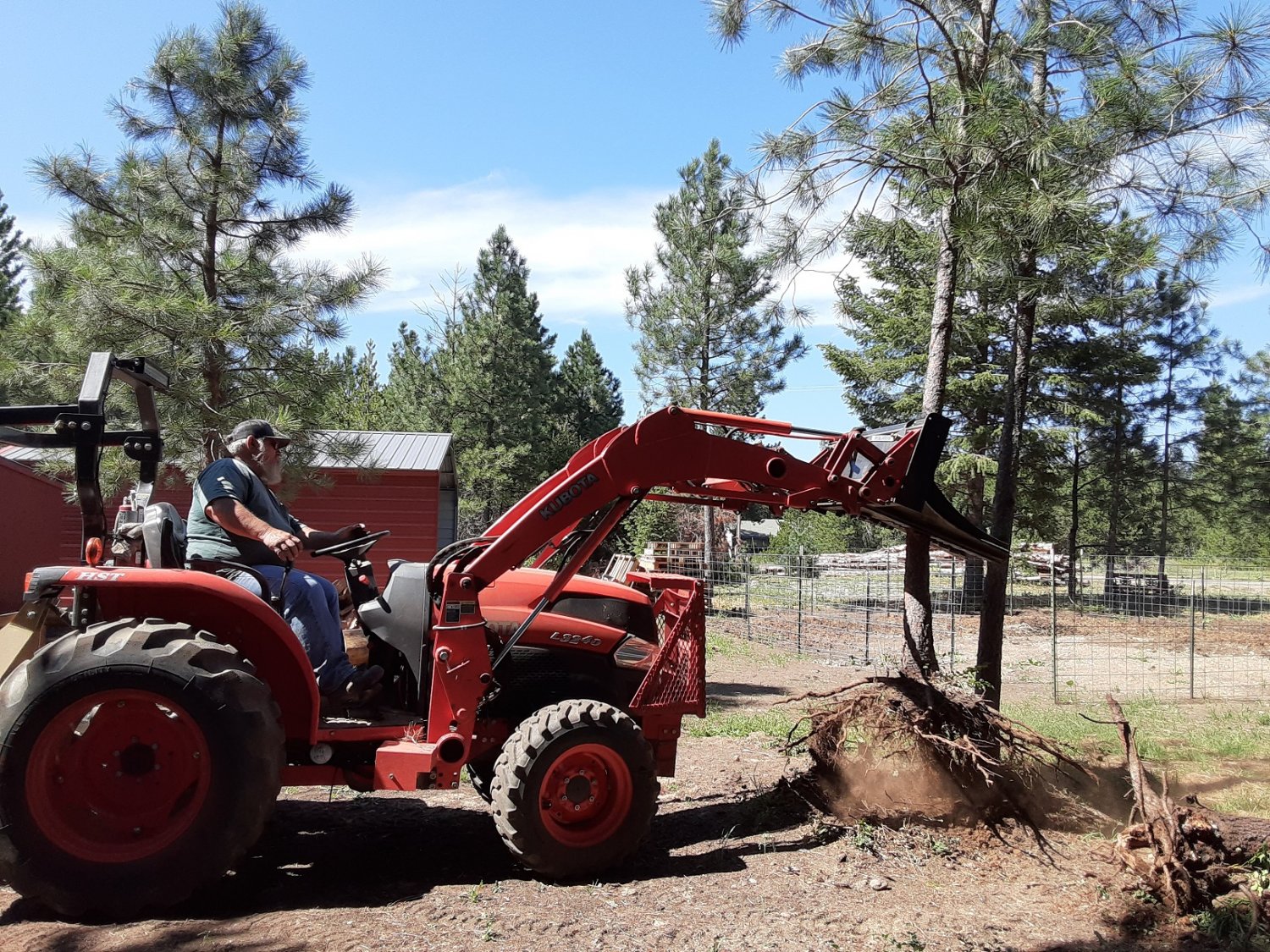 Then we had popsicles. I intended to pay them, but they all declined, saying the popsicles were payment enough. I'm sure their mom instructed them. The youngest 7 year old looked disappointed, he's from a different family and loves to work over here. All kids would rather work anywhere but home, LOL. I'll give him a little $ next time he does something for me.
He is actually useful, loves to use tools and I don't need to hover over him but can do other projects while he's working.


Today is a garden attack day, trying to make up for my neglect. Then this afternoon I'll ride over in the park and dh will take his mountain bike and go with me. Should be interesting. We've done that before and he had no trouble keeping up. That was with Luke, Syringa is quicker, and I go at a faster clip with her, but I don't think I'll be able to shake him, haha.

That cow moose with twins has been hanging around the neighborhood a lot. She hasn't discovered my alfalfa yet, but has been stripping leaves off the apple trees, and dropping a lot of apples in the process. It's not shaping up to be a big apple year anyway, but I was hoping to make some applesauce.

Our farm cat Finian is quite the hunter. But even he can be a little over ambitious. 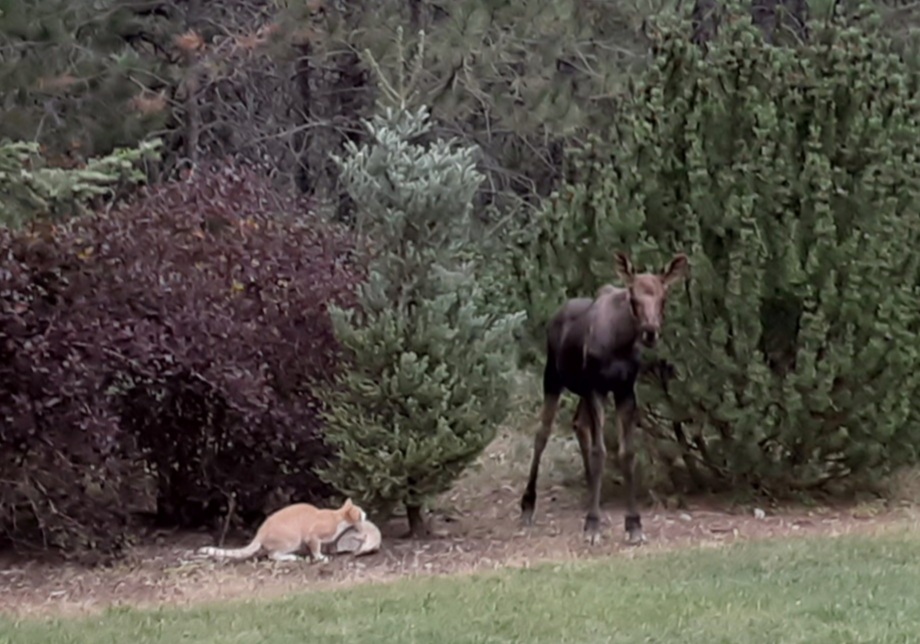 That moose calf got annoyed and spent some time stomping bushes. I think I heard Finn laughing...

Last Tuesday's evening ride. The world is upside down and inside out, but out there I can let it go and just enjoy the present. It's a gift I won't refuse. 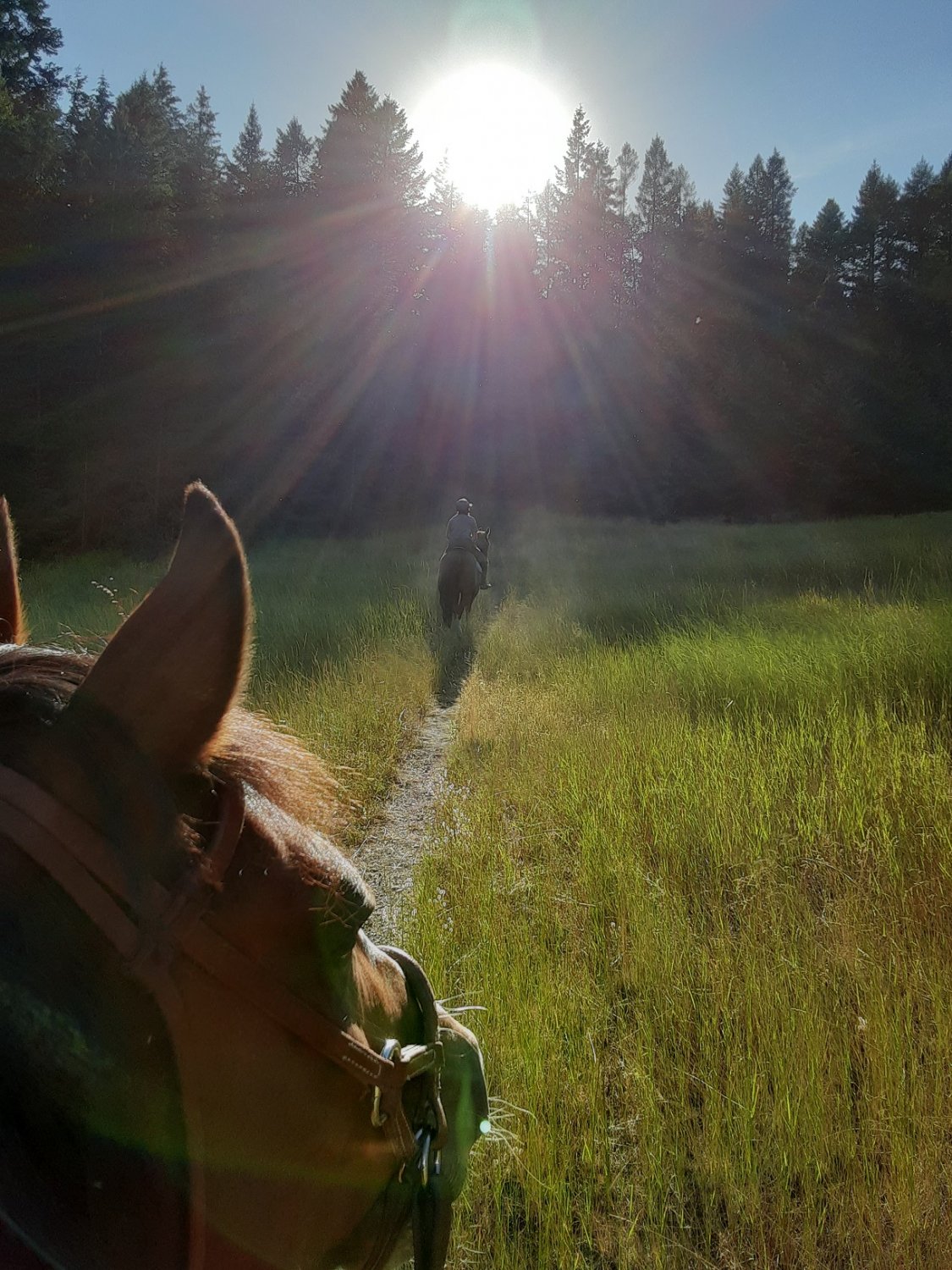