Senile_Texas_Aggie said:
or steam rising from the snow
Click to expand...

It is steam from the engine she's riding!

Are you still riding Syringa? We haven't seen any pictures of you and her and your beautiful scenery lately.

Oh yes, definitely haven't put her away for the winter!

I may trailer out today, haven't made a firm decision on that yet.
Right now my truck is at the tire place with dh having new tires and rims put on. My Christmas present. So I can't go anywhere with Syringa until he gets back anyway. They may be very busy with everyone rushing in to get their snow tires on.

I have plenty of stuff to do in any case, as soon as I finish my 3rd cup of coffee.

Here's a project with a history.
. 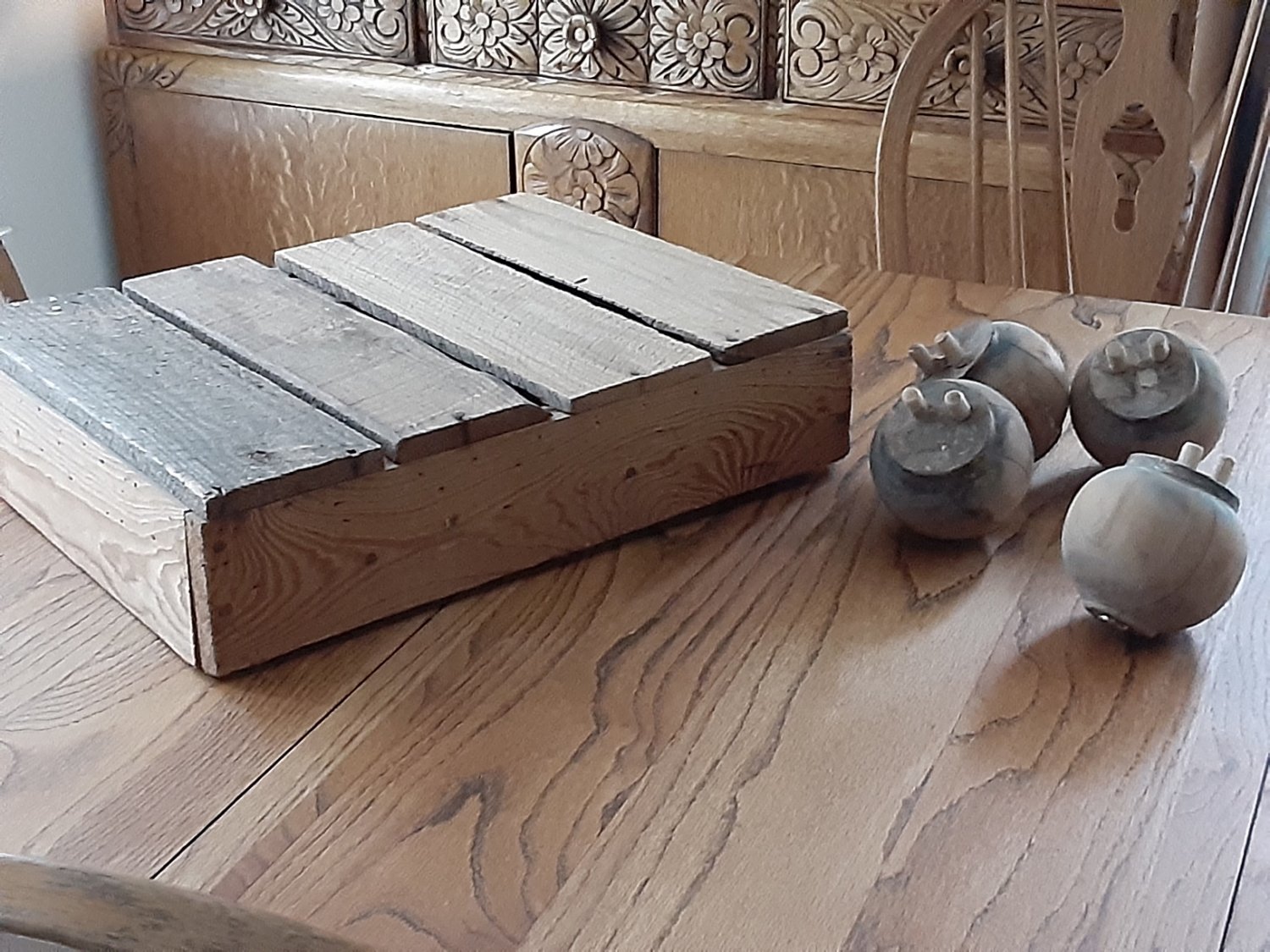 Twenty five years ago the boys and I traveled to MO to visit my sis.
We had such a great time! Sis and I garage saled and I found this little footstool with bun feet for something like $1.
She loaned me a suitcase to haul all our treasures home (that was before they wanted your first born to pay extra luggage fees).
I tore all the old upholstery off, and stripped the feet, then got busy with all the million other things that I had going on in those days.
So it sat. I got rid of many things when we moved cross country, we moved with the biggest UHaul truck they rent, but it was limited space for a household of four. It somehow made the cut and came along and has done a lot more sitting in the garage for nearly 20 years. One of those "winter projects" .

It's not anything fantastic from a furniture perspective, but it is loaded with memories of the good times with my sister and kids.
So now it's sitting in the house, where I can trip over it and remind myself that it needs finishing. I have a few options for covering it. My original idea (for years) was to cover it with leather. I have two half hides that I could choose from. Turns out that I have used more of those hides than I remembered for other projects and now there isn't enough.
The challenge for me is to not spend any money on finishing it, but to use what I have available here already.
I'll keep you updated. And now I will have to finish it since I showed it to you all.

thistlebloom said:
And now I will have to finish it since I showed it to you all.
Click to expand...

Very true! And we WILL hold you to that.


thistlebloom said:
Oh yes, definitely haven't put her away for the winter!

Don't forget to plug in the trickle charger when you do, wouldn't want her battery to run down.

Had a fine day today. High was 32F. Snowed a tiny bit yesterday afternoon, then cleared. The stars were brilliant, Mars can be seen close to the moon.
Cold last night, down to 20F, but sunshine this morning. ☀ I do love it when the sun shines.
Perfect day to get out in the woods for a ride. Went to the state forest and rode on logging roads and game trails so the dogs could go with. We had the best time! Syringa and I haven't had a good long ride for a few weeks I think. The trailer is still easily accessible and handy to hitch so I went for it. Once we get a lot of snow it will be too hard to get in and out so we'll be stuck riding on the gravel roads around here.

I had planned just to go to the lake overlook and turn back for home, but hung a right instead and went further up the mountain. Syringa suggested I let her catch her breath here, so we stopped for a pic. The trail we're on is behind us, but she thought there was something she needed to look at over there so that's what we're doing. I'm sure there was something she knew was there that I couldn't see. We saw elk tracks in the fresh snow, so it could have been that.
You can't tell from the picture because it's washed out, but the mountain behind the trees is across the bay and it was burned 8 or10 years ago. It was one Kid#1 worked, and I was new to the worry of being a firefighters mom.
I still worry about him, but I'm more used to it now. Probably better at it. 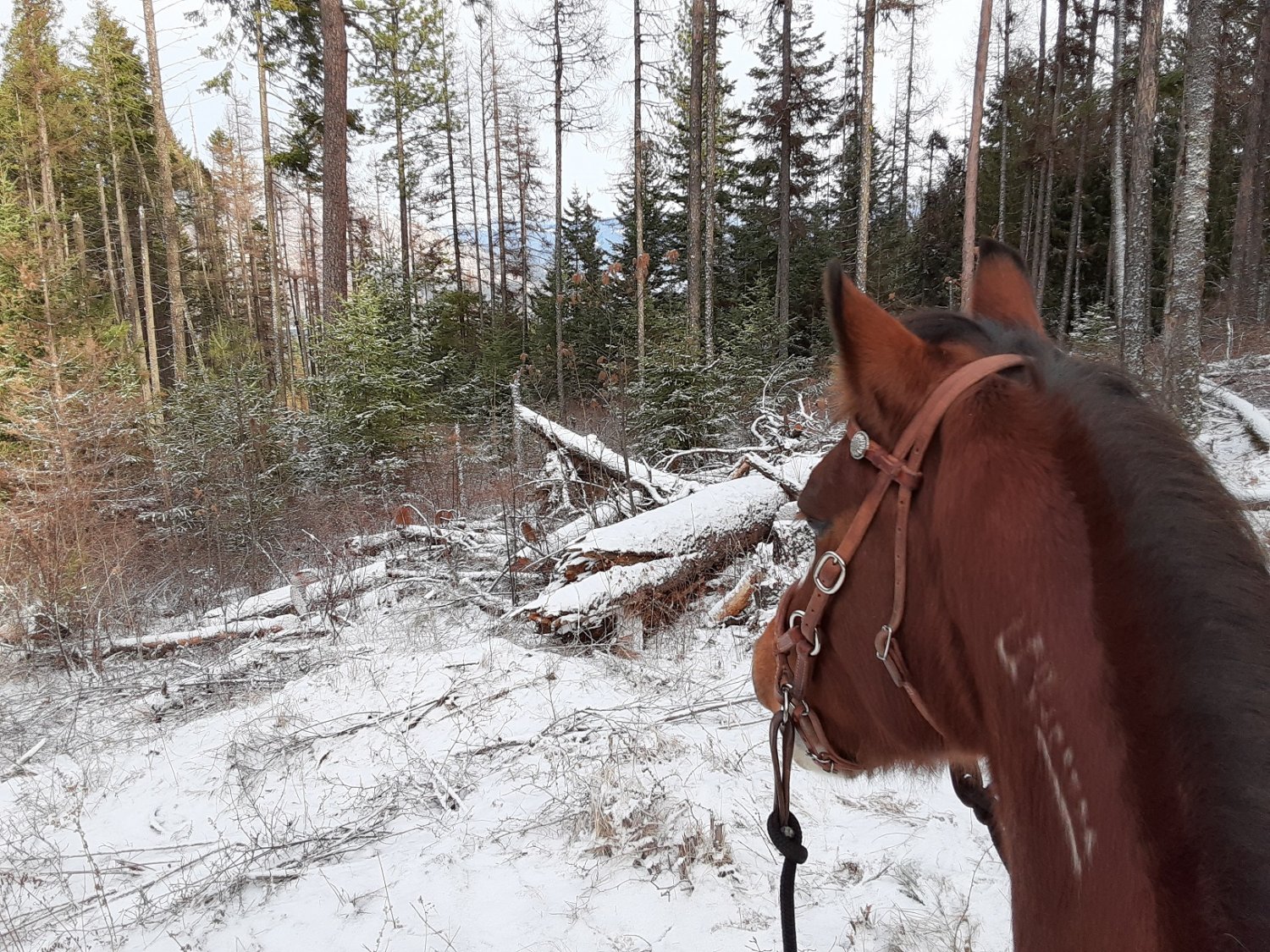 Nothing special here, just a gratuitous shot of Syringas profile. I was trying to get the dogs in a picture but they kept milling around. This one Wren is actually visible. I got a lot of pictures with dog bums heading out of the frame. 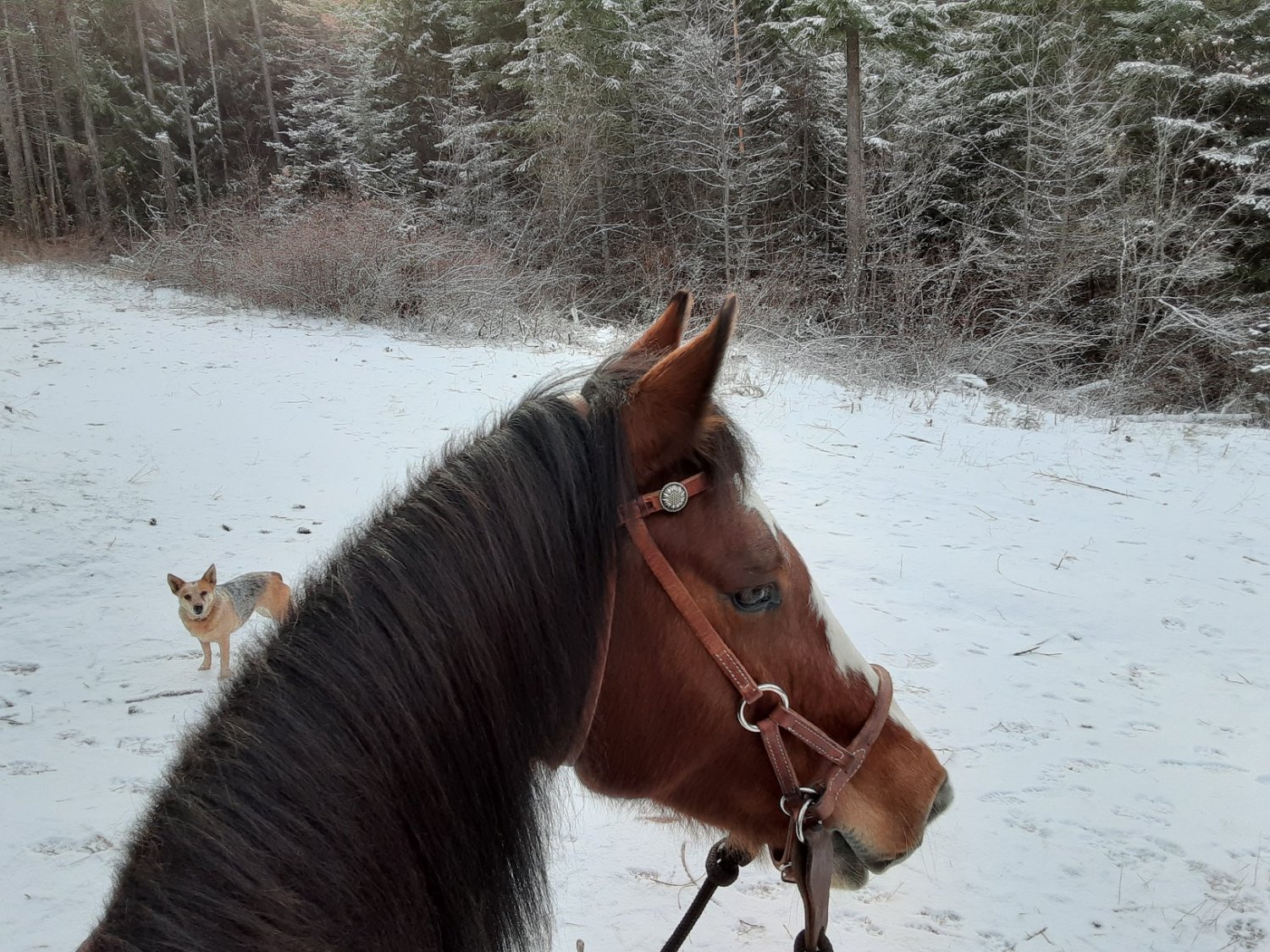 The top of the road . Not the top of the mountain, we'll head up there and explore that third road that forks off on the far left side when the days are longer next summer.
The road to the right, by the snag, is the top of one my friend and I dubbed Heart Attack Hill.

We were down below on the road one day heading to the lake overlook. We had talked before about exploring that "new" road that went up the hill but waited until we had more time. We decided we had time that day.

Before we turned up it and as we were looking at it's ascent up the side of the mountain my friend, said "looks pretty steep. Think the horses can handle that?'
Oh yeah, I replied, no problem!

It started out reasonable, turned a corner and got steep, turned the next corner and was nearly vertical, and kept climbing. Last summer there was an arson fire on the mountain started down by the lake where the terrain is too steep to even get a hand crew after it. This road was cut by a dozer during the fire fighting efforts and I don't believe I've ever been up a steeper one on a horse. Now I know that it wasn't actually intended for a road, it was a fire break. Oops.

My friend dismounted and led her horse up. She was worried about her mare who is not as fit as Syringa. We kept chugging away, but Syringa was making her way up in a zigzag (her idea, she's a smart mustang) and I had to ask the Lord to help us stay safe. If a horse got silly going up there it could be a very bad thing. We finally topped out and rested by that snag.
I haven't had the nerve to try it again. But we'll do it again next spring. I'm going to train Syringa to let me "tail" her up. For those who aren't familiar, that's when you dismount and follow your horse up a hill holding on to their tail, letting them help pull you up. Easier on the horse, and a great assist for the pedestrian rider.
We continued on the straight ahead road in the above picture and started descending.

This is where we got off the logging road and headed down a game trail to get back to the road that goes back to the trailer.
It was steep enough, but no comparison to old Heart Attack.
You can see the road we're aiming for down at the bottom. The top of this ridge we're on is maybe 20' wide and drops off sharp on either side. It is a descending series of three humps, with a small bit of level ground between each one. You can see our trail to the right of Syringas ear. 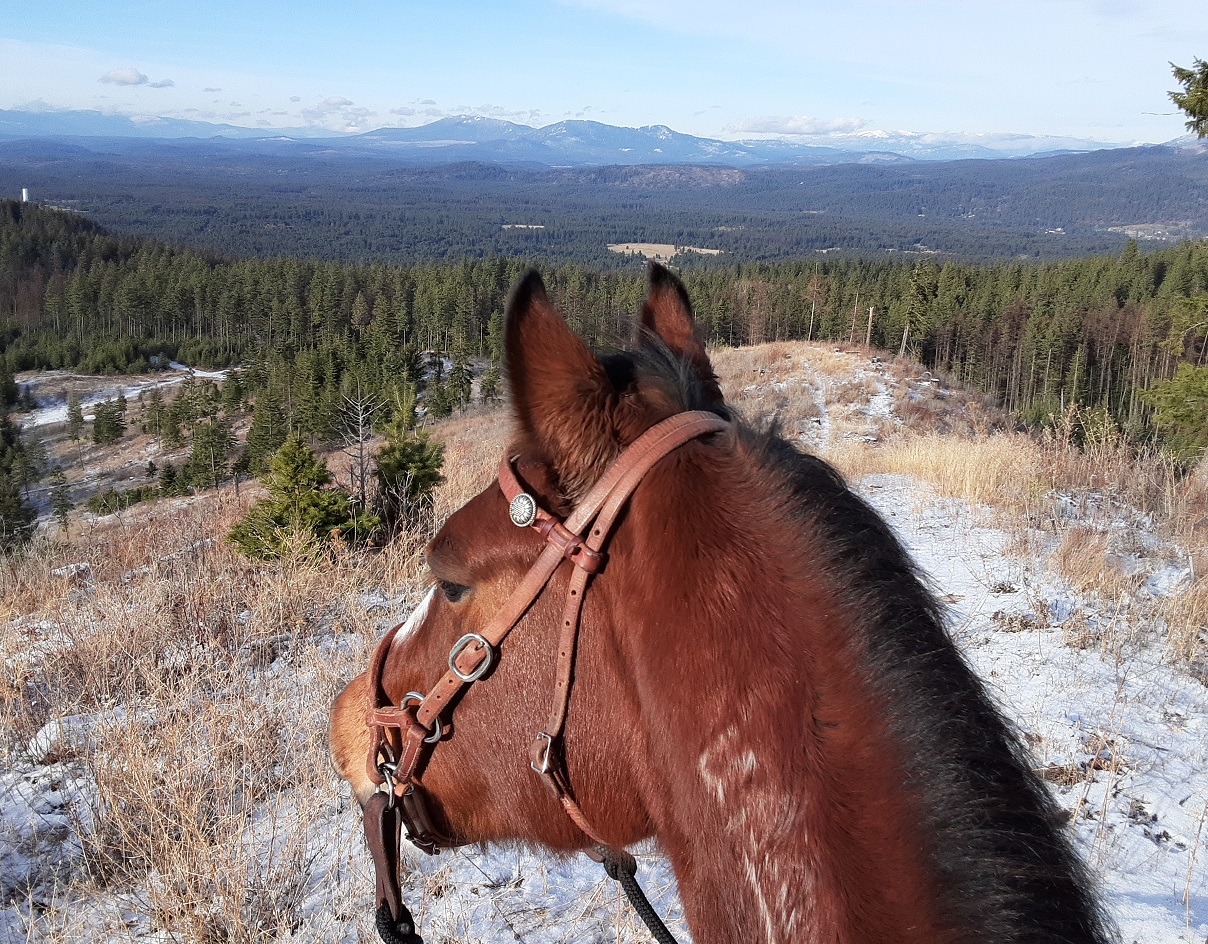 So that was our wonderful ride story for today. I probably have more things to talk about but my two fingers are tired of typing, and you have probably fallen asleep by now.

Thanks for taking us along on your ride. Spectacular scenery!

What beautiful scenery, Miss @thistlebloom! I am so glad you have Syringa to enjoy! Anyone who has read your journal knows that you have worked hard for what you have, and it is so wonderful that you have the chance to enjoy your time riding your wonderful horse! I did not fall asleep at all, but hated to see the story end. Please write more when you can.

We had a nice Christmas get together with the boys this morning. Shared gifts, stories and a few good laughs. Low key, like us, and I loved every minute. So nice to have a meal and time with our kids.
Now it's just DH and I, sitting by the fire, snacking on leftovers and remembering earlier years with the family and good times.

I hope you all had a good day to tuck into your memory stash. One you can pull out later and smile about.