Here's the building I think I'd like to put up. But only if its going out on the hay field.
I'm thinking of 20x30ft, but maybe it should be larger?
20×30ft would be 4x6 round bales, 24 rounds in one layer. 12ft wall height should mean I could have them stacked two high, 48 round bales.
Measuring for small squares, 3 bales fit roughly on a 4ft pallet. 5×10 pallets. 150 squares in one layer. They're roughly 1ft thick, so they could potentially stack 12 high. With more going around and between supports of the roof. 1800 squares.
Roughly 600 bales are needed for winter, so a packed barn should provide hay for year round use, which is needed for track ponies.

The leanto would act like a run-in for the ponies. It could also be split up many different ways to make one stall for an injured pony or several stalls for them all to use.
The supports are 5ft apart, I'd like to add a wall to every other 5ft span. Two 5ft spans would make a 10x10ft stall, perfect for a pony or two minis.
And since I would make the posts the gates hang on stand alone from the barn, I could make pens in 5ft increments!
The open 5ft span would have a gate that opens out to the track/field.
The back wall on the leanto would be enclosed. The front wall would be open and have a removable gate.

Hopefully, you can see these details in the pictures I drew in.

It would be on gravel. Probably need a foundation just for the walls to make it level, not sure what I could have done for that. Railroad wood, concrete? Idk yet. Whatever it will be, it will have to be flush with the inside of the leanto, so that it stays out of the way!! 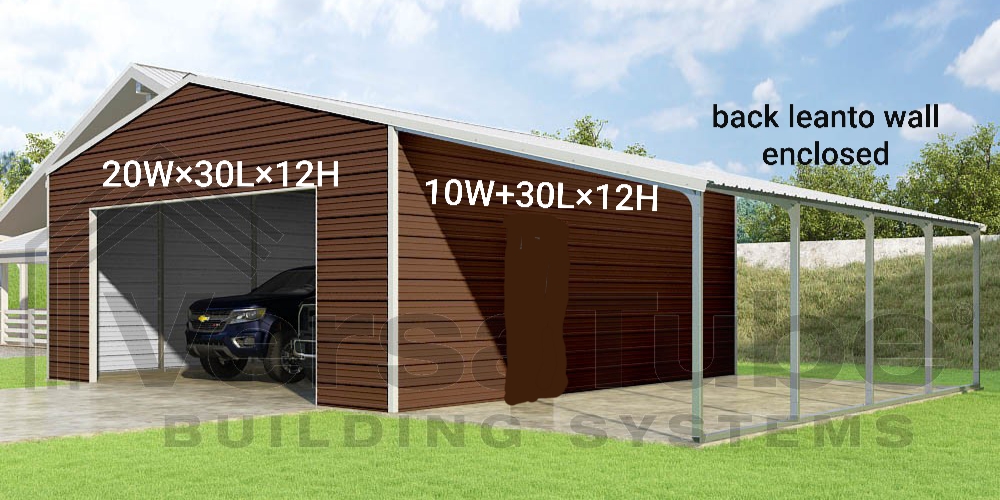 Back wall closed in. Alternating 5ft spans are enclosed. Front has gate.
Ignore the colored in doorway, that would not be included. 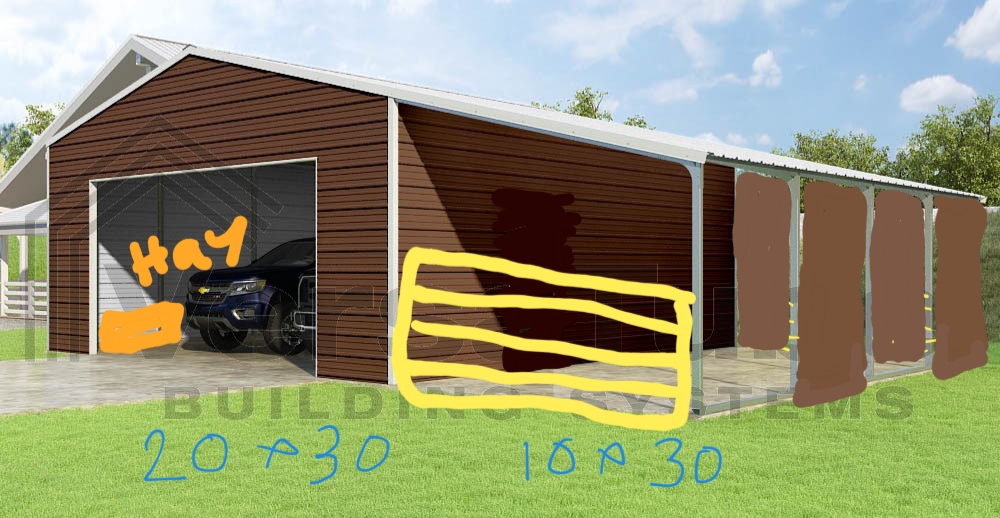 This one shows a green gate in the open 5ft span and a yellow gate near the back enclosing a 10×5ft pen. I couldn't draw it to be obvious at the 10×10ft size. 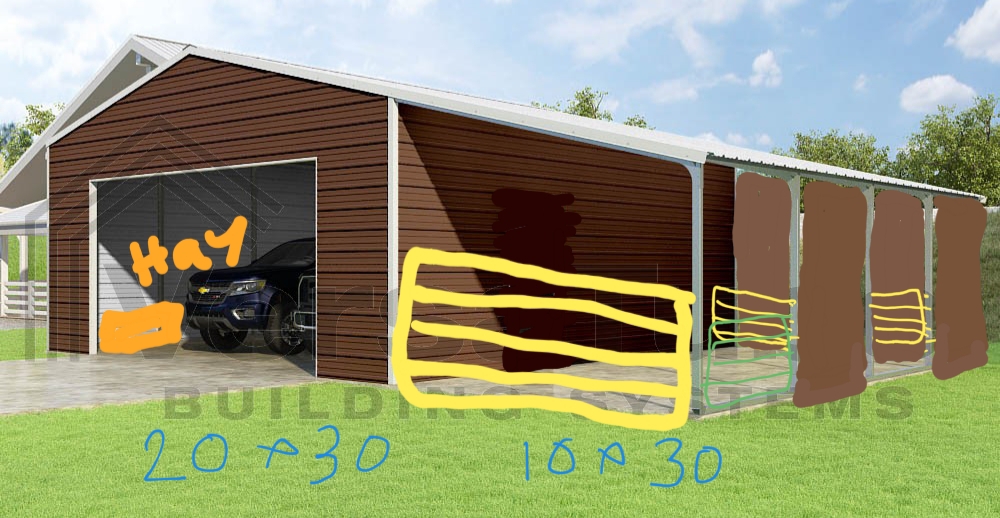 Here's one with the hot fence & gravel base. Clearly, I'm a visual person, lol.
Gravel would extend out to fence and in front some to deal with mud. 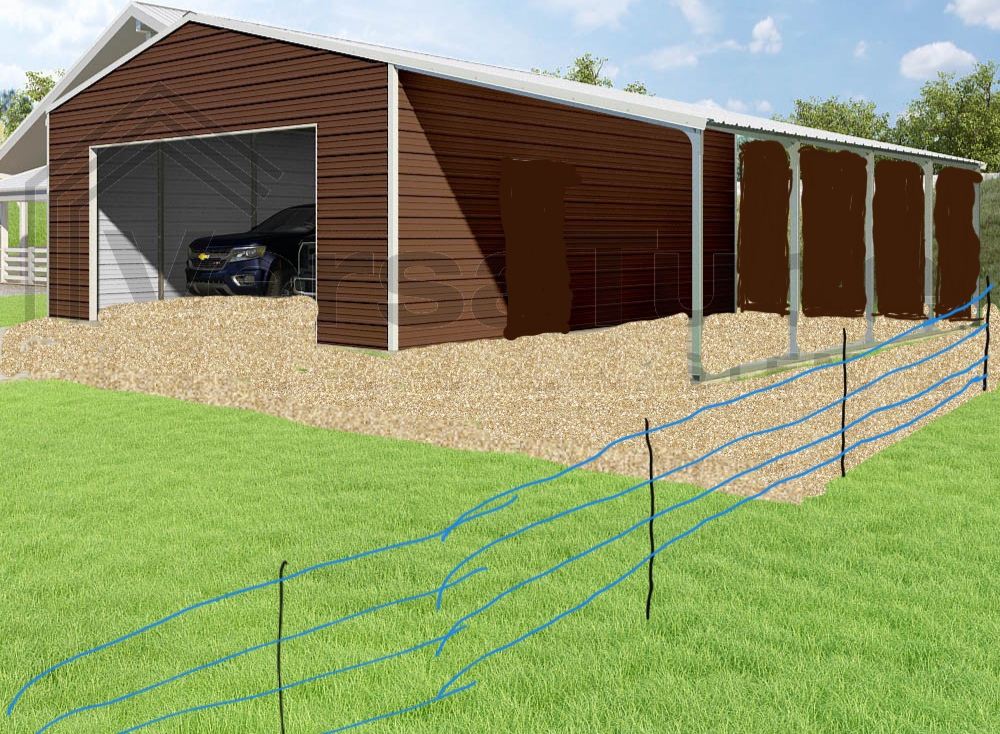 The alternative option is to build two new buildings. One strictly for hay on the old land, close to current barn, in the first sheep paddock. And then an open carport on the track for the ponies.

It would be enclosed on 3 sides, on gravel. Only the front side would be open. 10ft gates could be used to make stalls, but I'd jump them to get to other pens or have to take down pens to get rear horses out. Other than a bizarre situation, I don't think I'd ever use them all. I have never stalled a horse in 9yrs, almost had to twice, but being in the large paddock worked out. 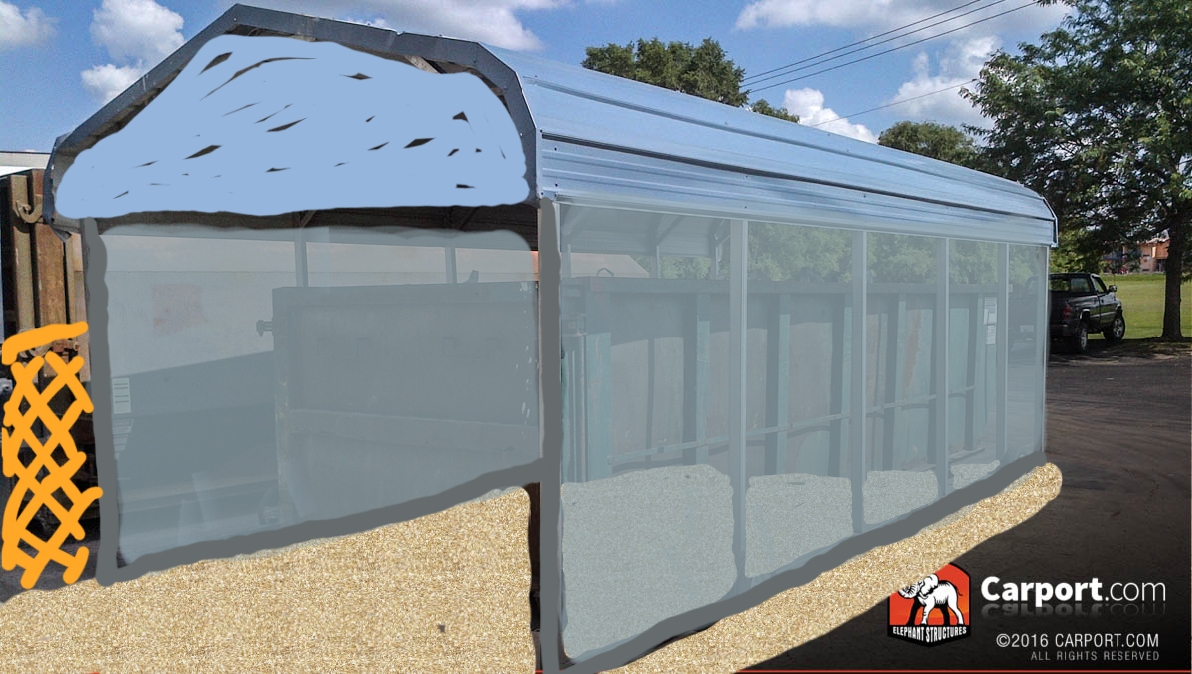 Hay barn would be enclosed on 3 sides, very heavy tarp or moveable plywood as doors when raining or snowing. 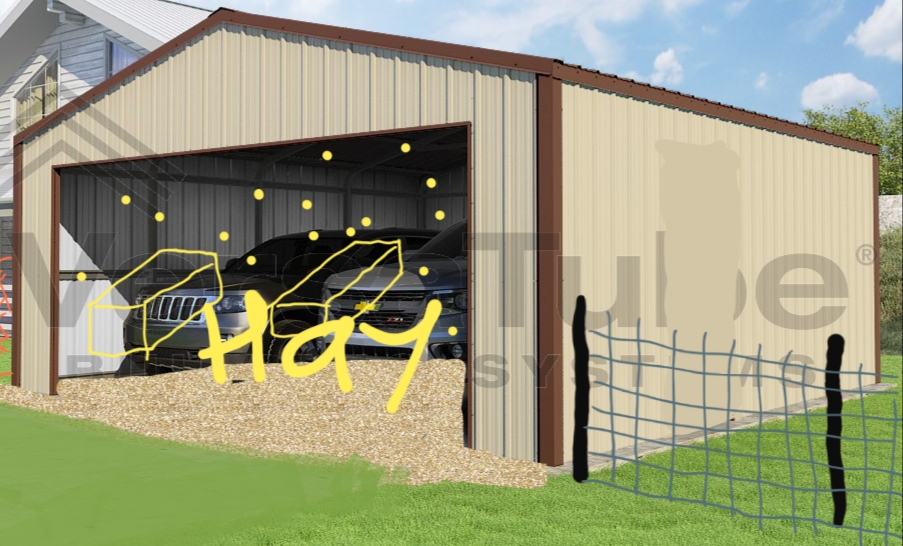 I'd go bigger. 20x30 sounds like if you stuffed it full it would barely hold what you need for the year. I'd go taller too and add enough height to get 3 round bales stacked, if needed. Do you have a tractor big enough to stack them 3 high? That gives you extra room, in case you need it.

Why gravel base, if because of mud, won't it sink in the mud over time? Also, keeping the ponies on gravel will be hard to clean up. It would be more expensive, but I would definitely concrete the hay barn, then lay pallets down to stack the hay on, because concrete will sweat.

I like the barn with the lean to for the ponies. Hay barns generally need plenty of air flow. If the front is going to be open with a gate, what do you think about leaving the top sheet of metal off under the lean to? The lean to roof would keep rain out, but open at the top would increase air flow.

Only the ponies eat year round. Should never go through 1200 bales the rest of the year, since they only need 300 for winter.
Reminds me, new hay has to go in. Which is another annoying dilemma. I don't want another giant door, so I'll have to use up hay in a way that let's new hay go in...

Two high only. I have to shove them down & roll out by hand. I don't want rounds, but some makers only do those and beggars can't be picky. Zero farm equipment here.

Gravel because I'm not rich. Unless I find a pro to do it cheap enough. Actually, don't even need the gravel in the barn, just the leanto and a little leading out to track.
I'll toss out mats so poop can be easily removed, if they end up hanging out in there excessively. And lock them out altogether in decent weather. 60 and sunny, they don't need it. 25 and wet snow or 98 and blazing sun, they may prefer the building vs trees.
Hay will be on pallets either way. Hay for them to eat is in nets out around the track, never in a building, no matter the weather, unless injured and stalled.

Guess I can ask the company to leave a small middle section off. Rain/snow sometimes blows up and sideways here and in every direction...

That answers my questions! yeah, you have all that lush grass! So you don't have to have lots and lots of hay. A new barn is exciting. It costs money, but it is well worth it. You might wand to go a little bigger, use hay off one side, then move to the other side. Stock hay back in on the empty side. Just a thought.

You would have to buy a pretty big tractor to move the round bales. I have a Kubota 2320, that's a 23 HP and it won't pick up the round bales. A bigger tractor would be nice, but I am grateful and happy to have the one i'v got.

Before we had material hauled in for a driveway extension we bought some underlayment fabric. I think it's called Geotextile Fabric. It has worked great for quite a few years now - standing up to tractors, trucks and trailer traffic. I want to do the areas around my gates with it eventually.

Guess I've sort of made up my mind. Ugh, sorry.
But I'll try to figure out concrete and think about a wider barn in case I have to use the guy that does 5k bales and then I sell as many as I can before 2nd cutting...

There is nothing to be sorry about, we toss out ideas and discuss them. I have gotten lots of good ideas from others input. Lots of ideas won't work for me, but it is all good discussion. I am happy for you that you are getting a new barn, it is a great achievement. Can't wait to see pictures of it up and being used!

I wonder how much these cost...Then just use thick plywood to make walls...
Waiting on quote estimate.
Put it on the round concrete footers. 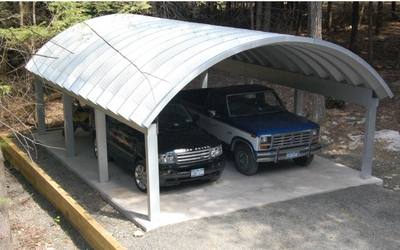 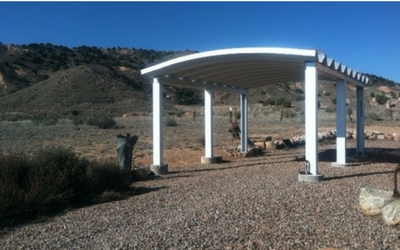 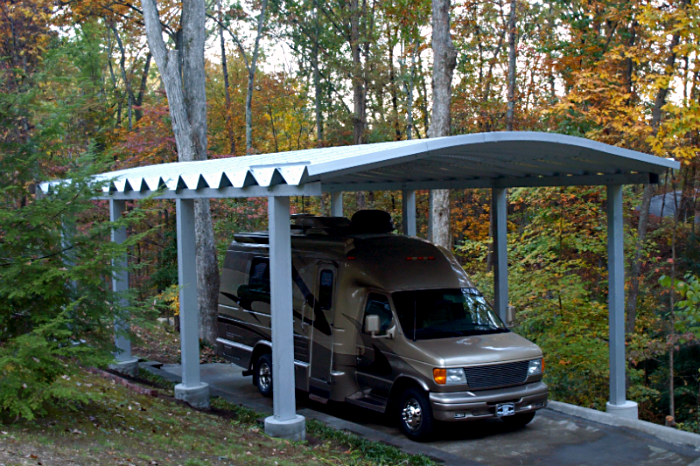 I put together a 10x10ft metal Lowes shed a few years ago, so just the roof needing sheeting would be a breeze! As long as there is no real breeze...lol
Oh, cheaper at Lowes...