Two litters, foster or not?

Hey all, I had this problem last year (May/June) and I know it was caused by heat but I didn't think it has been hot enough yet to have to worry about heat issues. My doe Paprika had 6 kits yesterday 3/31/20 and I barely peeked at the nest last night, just enough to know she had some wiggly babies in there. None looked dead and I didn't want to mess with them too much. She hadn't pulled very much fur but I had plenty of hay in the nestbox. I looked again tonight because one was farther out where I could see it and 4/6 were dead (blood in toenails, no chance to revive). The other two were quite wiggly and there was a lot more fur in the nest. The dead kits looked like they had mostly full tummies, they weren't huge but they were definitely not flat; they were quite wrinkly looking though. One dead kit did have part of an ear missing, I'm assuming due to overgrooming as they were born.

My other doe Cinnamon had 7-8 kits today 4/1/20. After finding the dead kits in Paprika's nest I peeked at Cinnamon's nest to see if I could count them and see if any were dead. All looked alive and popcorn-y and I covered them back up.

Should I remove a lot of the fur from Paprika's nest? Since she now has two kits, and Cinnamon has 7-8 (provided we don't lose any tonight), should I move some of the kits from Cinnamon to Paprika? I think she would take them ok. I am not sure how Cinnamon would do with so many kits, her first litter only 3/6 survived, second litter had 5/6 survive. This is Paprika's third litter, her first she had 0/5 survive (heat), and second litter had 6/6 survive.

Checked on them at lunch today and Paprika's kits were still alive. Cinnamon's kits were ok too. Still trying to decide if I should foster or not.

Larsen Poultry Ranch said:
Checked on them at lunch today and Paprika's kits were still alive. Cinnamon's kits were ok too. Still trying to decide if I should foster or not.
Click to expand...

I would give it another day or two, since Paprika lost 4 of 6, I would hesitate and make sure she's taking care of the 2 she has. But in most circumstances I would definitely move a couple kits over.

I'm wondering if paprika has a genetic issue since she lost all her babies last year, if I remember correctly?
Considering the previous year experience I'd maybe let cinnamon do the honors of raising any kits

She raised 6/6 her second litter though, and one of those kits weighed 8 pounds at just over 3 months old. Maybe she doesn't make the nest right, and it's the wrong temp for the kits?

Ugh, I can't wait until we sell this house and get property with acreage. I have been promised a rabbit barn. It will probably be easier on the litters if the temperatures don't have as much swing as they are now. Supposedly got into the 30s overnight and up into the 70s during the day this past week.

Checked on Paprika's kits and they were alive, tummies looked full. Didn't peek in Cinnamon's nest, I'm hoping they are all still doing ok.

I'm thinking if everyone in both nests are ok tomorrow in the daytime, I'm going to move 3ish of Cinnamon's light colored kits to Paprika, so both moms will have roughly equal numbers. They are probably sable agouti or dilute sable agouti like the last light colored ones.

Since the babies are now 8 days old, I would only move 2 of Cinnamon's kits to Paprika. Her milk has adjusted to 2 babies and adding another 4 might result in underfed or starving kits. Since Cinnamon is doing well with 7-8 babies she has plenty of milk. I would move 1 kit to Paprika at a time giving her time to build up her milk supply for another week old kit or 2. In another few days move the second over to her. Otherwise leave the itters as they are.

If you had moved the kits at birth, Paprika would have provided the right amount of milk for the newborns since her body was prepped for nursing 6 kits. But now after 8 days her milk supply has adjusted to only feeding 2 kits. Also they are 8 days old and their consumption has increased. Her milk supply will not be enough to feed 4 more 8 day old kits. That is triple what she is feeding now. She would have to produce three times the amount of milk she currently has. While in an emergency (death of nursing mother) it would be worth a try I think it would over stretch what Paprika is able to feed right now. You don't want to stress her and lose the litter at this point.

I moved two kits from Cinnamon to Paprika on 4/8. One of the kits peed on me! This afternoon 4/9 I checked on them and both nests were doing well. Paprika's 4 seemed fat and happy. Cinnamon's 5 were bouncy. One of Cinnamon's kits looks like the fur is coming in yellow, not sure what color it will turn out to be yet. 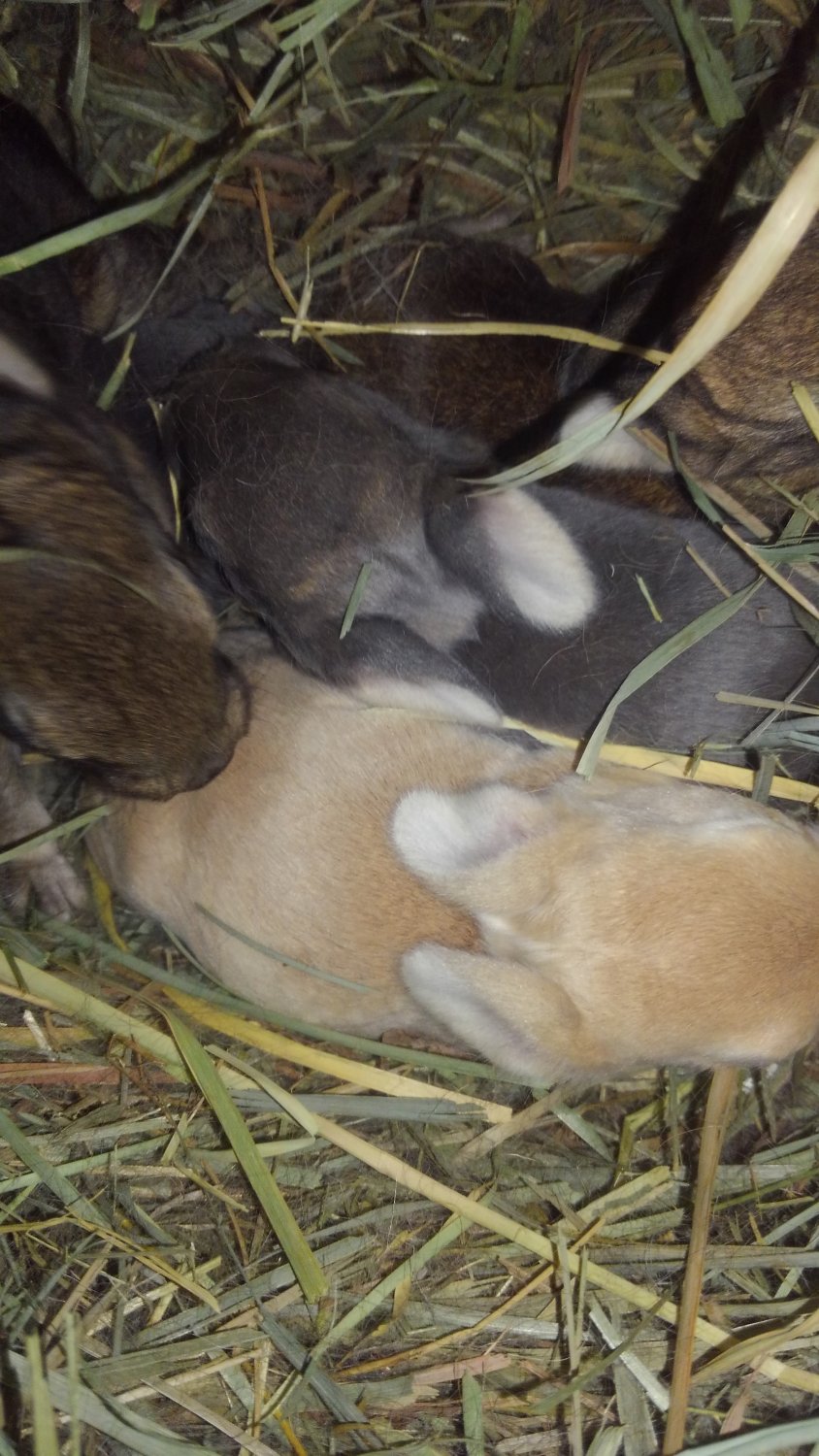 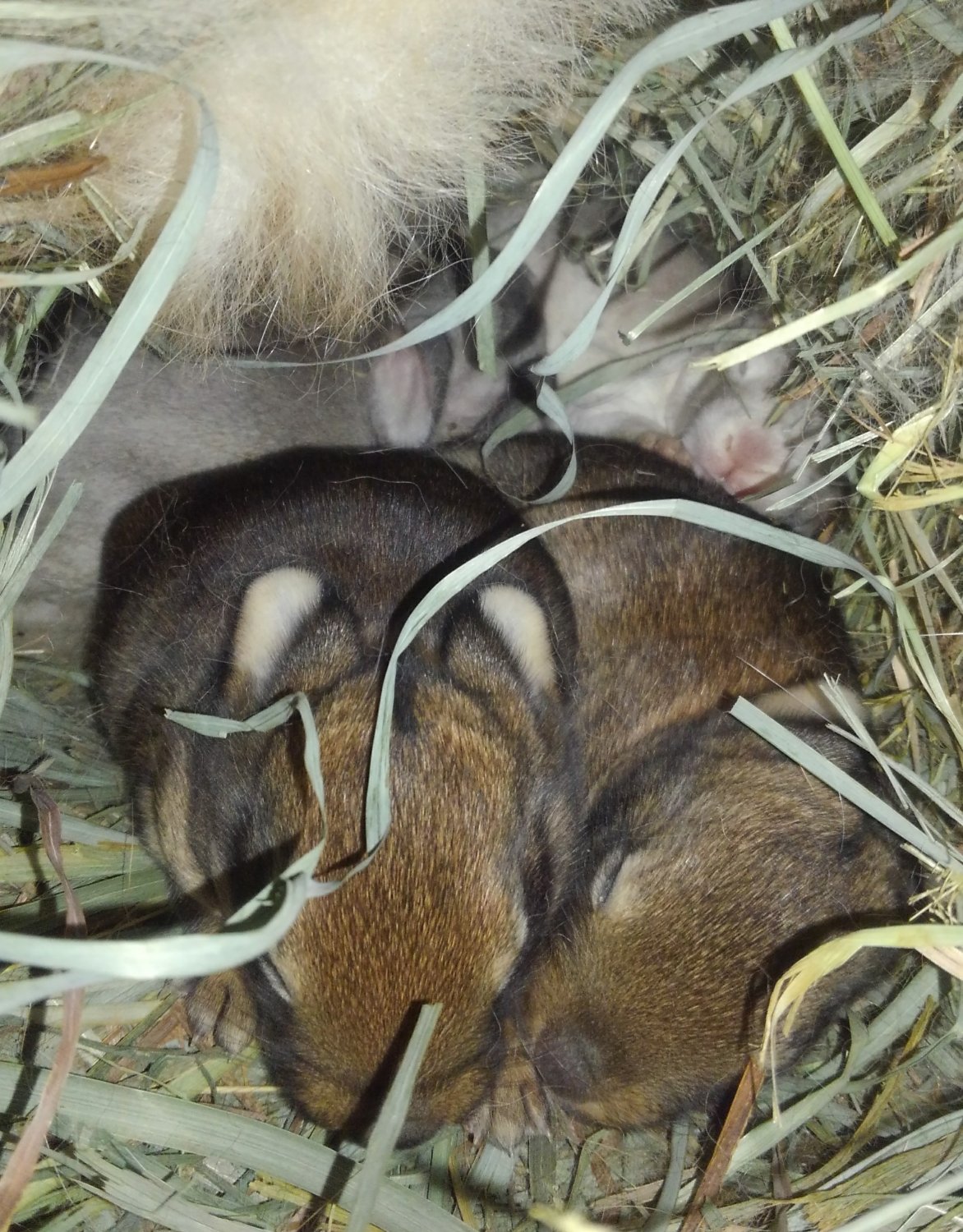