We saved a cow because of you!

So yesterday morning we had to run some errands. On the way home we noticed a cow down in the pasture up at the corner. Something just didn't seem right so we got out and walked to the fence. She wasn't moving at all and all the other cows started walking away and left her.

Now we would LOVE to have some Highland cattle. I've read gobs and gobs and gobs of posts on here, trying to learn all I can so we can decide if they would be a good choice for us. We also live in a community that is mostly cattle farms. I have noticed when the herd moves, the ENTIRE herd moves.

Since they left her we decided to go up to the house to see if we could find the owner. No answer at the house. Went to the corner store next to them and let them know so they could try to find a phone number for him. Called the sheriff's office and let them know and they called the mayor to see if he could track down a phone number for him. Left a message for the local Ag extension office and called a farmer neighbor friend of ours and let him know. Then stopped at the logging company up the road from the farm to see if they could find a number for him too. God, I LOVE small towns! <3

We went back up to check on her and she had started struggling. No matter how hard she tried she couldn't get up. We walked around to look from another angle and I noticed she was laying with her legs uphill. Aha! I remember a post saying that was bad.

We had done pretty much all we could so we headed home and prayed someone could track him down. Our neighbor friend messaged me in about an hour and said he did finally reach him by phone and had met him at the farm. They got her rolled back over and got her up and walked her for quite a while to get rid of all that built up gas and made sure she was okay. Apparently he had been planning on being gone all day and his wife was at work, so if we hadn't gone to the lengths we had to get word to him he said he is sure she'd have died before he got back.

So basically all of your posts helped save a cow!

That is awesome, not just that you learned what to do because of reading on BYH, but that you are a good, make that GREAT and CARING neighbor to go to the lengths that you did to save the cow's life.

Great job..when most would just pass by, you went above and beyond to help

Thanks. We had to run one of the dogs to the vet this morning and it was great to see that empty space in the pasture. Lol

Good job.
It's usually called being 'cast'. It can easily result in serious bloat..and quickly. It does not take much of a depression in the ground for it to happen either.
Is the cow lying flat out? Is she cast? ‘Casting’ happens on an uneven surface that is slightly higher at the point of the downside shoulder. The cow becomes overcentered and her core muscles are not strong enough to allow her to pull herself to her sternum. A cow in this position will often thrash and beat her head on the ground/floor and will bloat when left in this position for an extended time. Get help to halter her and to place a rope low on the down rear leg. Tuck the down rear leg forward, then while pulling the rope under her to keep the leg tucked, roll the cow onto her sternum. She will need to be propped if she immediately tires to lie flat again.

It has been a couple decades since I had one suffer from being cast, and she did it by laying or slipping down on the sunny side of the pond dam. She was dead when I found her.

Herds don't always move' as one'.
Maternal pecking order will play out and herds often split into 2 or more 'semi-herds', each 'led' by it's own maternal herd mistress... They will join as one if called or herded by human influence but will again separate out once feeding or herding is done with.
M

Thank you for the info.

Guess I should have clarified. There is over 1000 acres at that farm and multiple herds. The one that had been with her left. I'd just never seen a single cow left anywhere. They graze in large areas, but you can tell it's one herd. So when all the others left and went to a totally different pasture and she was there alone it just didn't seem right. We actually for a minute thought she may have been dead until we saw an ear twitch. When we came back and saw her trying to kick and couldn't get up we both knew it wasn't right. We aren't'cow people' by any means but I'd read a lot and spend 8 hours a day hooked to a phone in my office watching the herd across the street. After nearly 15 years of it, it just felt wrong. Glad we helped.

Usually, if I see one of mine either laying down and/or off away from the others and alone, I first think 'calving'.

Mine split up into 2 separate groups and always have for the last 4-5 years and come together only when I'm putting out new hay.
This is about 1/2 of them.the other group will stay on the east side of the pond until these move that way, then the 2 groups just swap places. 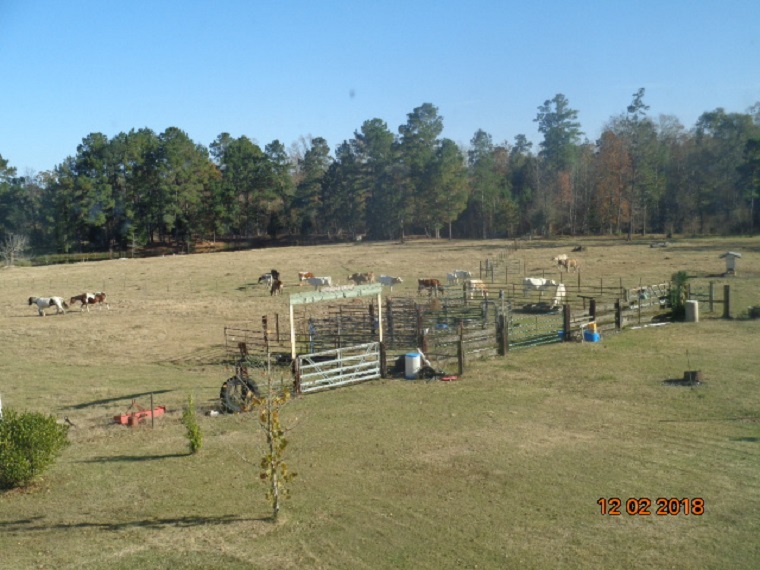 We lost a ewe that tried to give birth in the side of a hill and cast herself. The first lamb born survived but the second one didn't quite make it out. She wasn't supposed to lamb for another 2 days and I got lazy and left her out instead of bringing her into the jug. Never did that again. we also had a pony get cast on a hillside and he slid under the corral fence. Had to take the corral panels apart to get him up! Luckily my neighbor looked up the hill, and noticed him down, and came up to tell us. It took 4 of us to lift the panel away and roll him up. He was a little guy but the hill was steep.