Not sure if this is pink eye or just irritation from... something?

We purchased two crossbred calves about 2 weeks ago. They're 6-7 months old, half sisters. They were weaned shortly before we brought them home. No vaccinations yet. They both looked fine the first two days after we brought them home. On the third day, I found one calf, "Maryanne," with some tear staining on her left cheek and a slightly runny nose. This persisted for a day or two then cleared up. She was looking fine after that until yesterday. Yesterday and today she has significantly more tearing than she did two weeks ago, and she's holding the eye partly closed. As far as I can tell, her actual eyeball is OK. The inflammation seems to be mostly to the membranes around the eyeball and the "third eyelid." Her other eye (right side) has some tearing and her nose *might* be a little runny. She seems fine otherwise. Eating/drinking/peeing/pooping/chewing cud. Her sister looks perfectly healthy, so I'm guessing it's nothing highly contagious. We are having a warm spell, and the flies are out in force. (I plan to dust them with DE today.) The grass is also high, and it's been breezy, and Maryanne has a habit of burrowing her face completely in the hay bale, so it's also entirely possibly she has a sliver of something stuck in there. 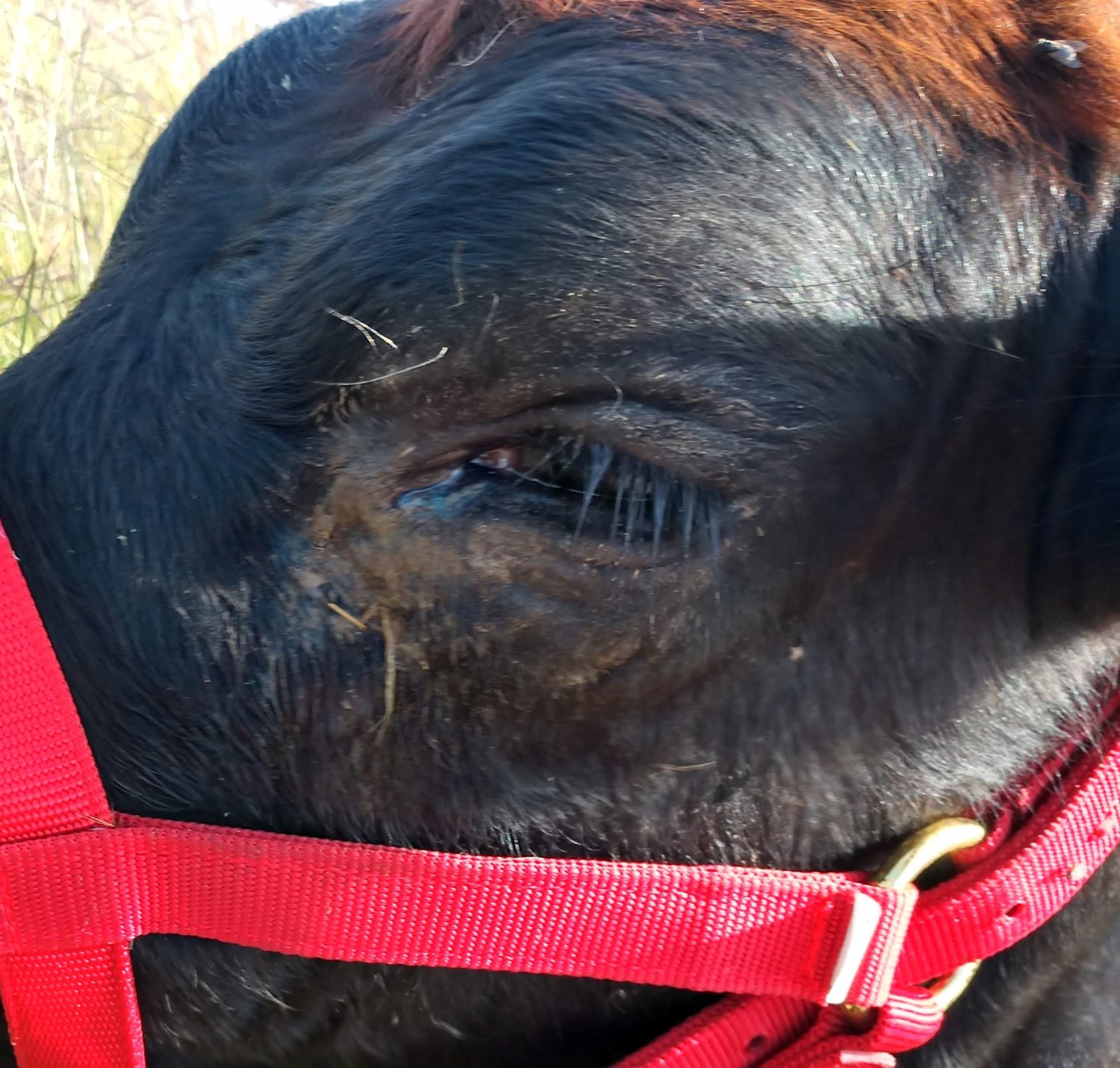 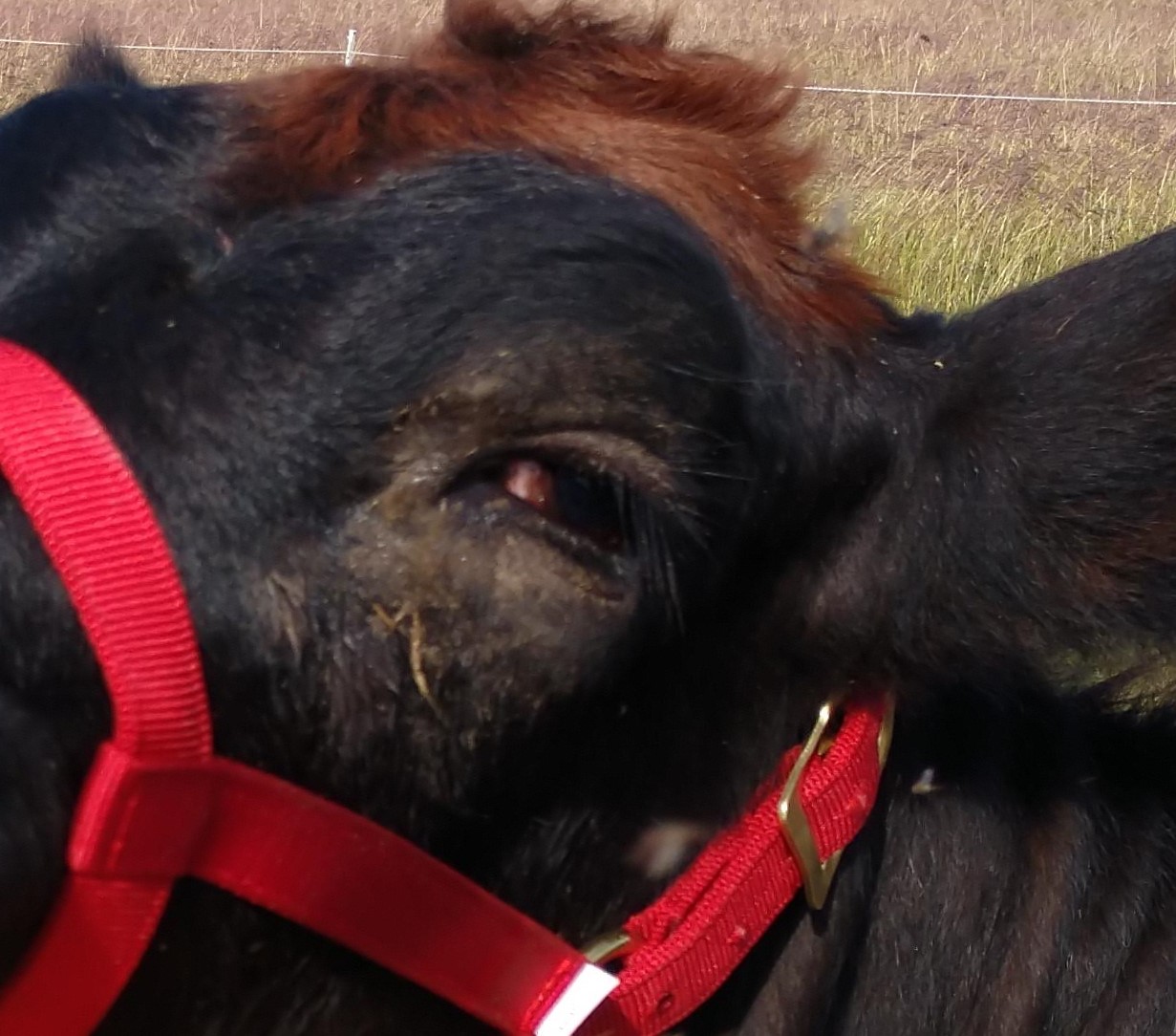 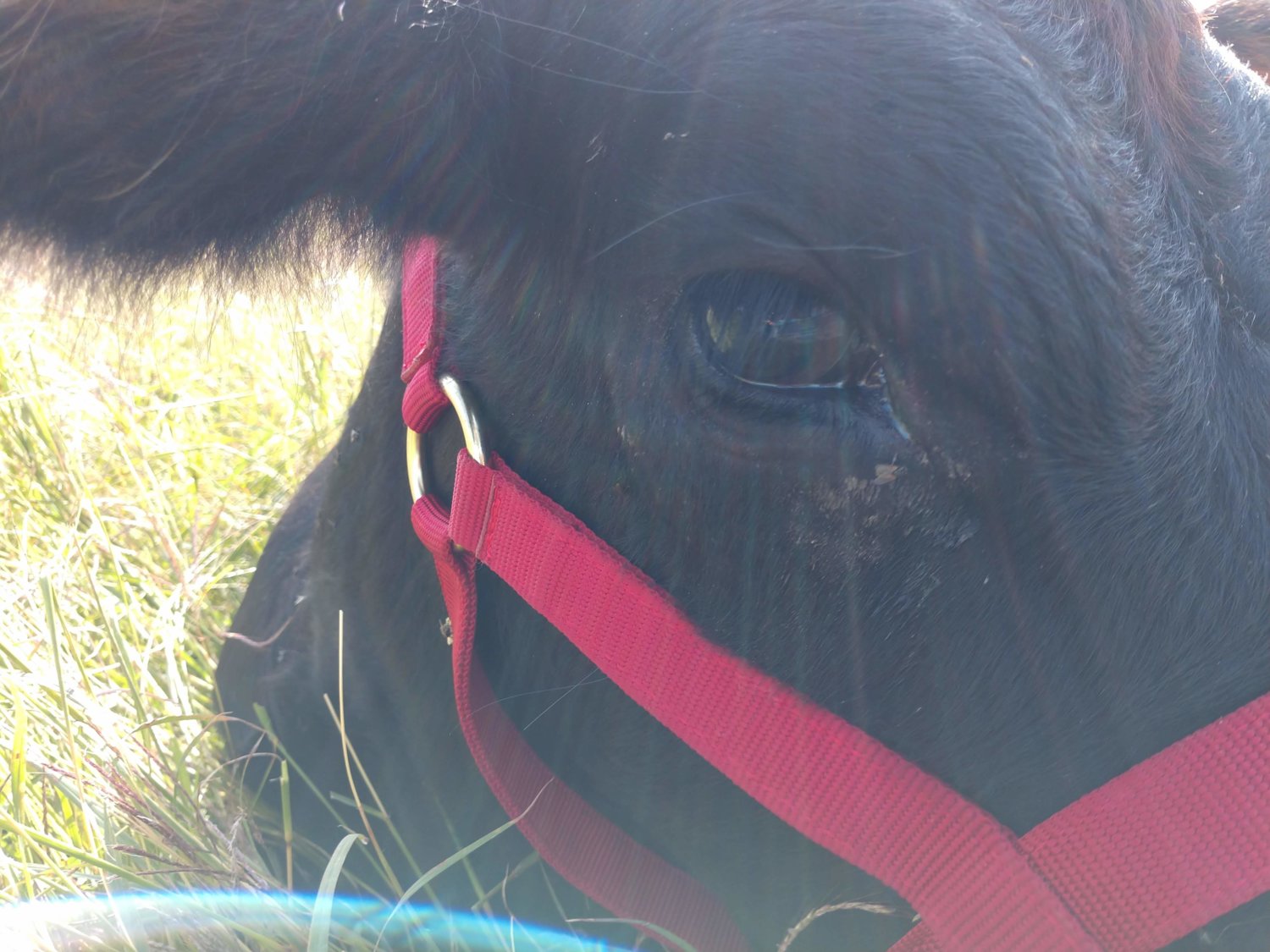 Right eye, a little goopy but much better.

Sure looks like the beginning of pinkeye, with the redness in the white part of the eye and the tearing. I don't see the telltale white spot in the cornea, but it may be premature to look for it yet. The cornea will cloud over some before an ulcer begins in the cornea, but that's hard to see in photos. Flies are the usual vector for the bacteria that causes PE but if it's the high grass irritating her eyes, I would think all your herd would have it.
If you are going to treat it, do it now.

Having said that, it could also be a foreign object as you stated. You really need to have it looked at.
Either way, isolate her from any other cattle and try to keep her out of the wind and sun if you can.

Thanks. I gave her a dose of LA-200 yesterday. I'll give her through the weekend to see if it improves and will call the vet Mon if no change.

I actually do think her eye is just slightly better today. She was holding it open a bit more, and I think I caught a glimpse of an ulcer on her iris. So I'm pretty sure it's pinkeye.

Our "herd" is really only 4 head, two finishing beef steers and these two heifers. The girls are already quarantined since we just brought them onto our place, so it's mostly just the second heifer who is likely to come into direct contact with Maryanne. I suppose separating the girls and penning Maryanne in the barn would be best, but I hate to stress her more. She was weaned shortly before coming here, then of course she changed farms, now she's sick... I'm honestly not sure that separating her from her sister would be worth it?

You separate them because the pinkeye pathogen M bovis is so contagious.
It's hard enough to be treating one...no need having to treat them all if you don't have to.

Oh, yes, I know it's quite contagious. If I thought she was at great risk of infecting a bunch of other animals, I'd separate her for sure. But like I said, in this case it's really just her sister who is at big risk. The steers are already fenced away from the girls since I planned to quarantine the heifers for a month after bringing them here. Even then, of course, there's no good reason to think a fly couldn't buzz across our property and infect a steer, but putting her in the barn wouldn't do anything about that anyway. Flies gonna go where they want.

I don't particularly want to have to treat the sister, but now that I know to keep a diligent eye out, and I have the meds on hand, it wouldn't ruin my day too much. Separating them, though, would mean that both calves would be alone in their respective areas. I think I'd rather risk pinkeye in one other animal than stress them both out.

That's up to you, especially since you aren't sure it's PE. Lots of time, pinkeye will run it's course and take care of itself without any intervention. I vacc for it and when/if it does show up, I treat it.
(Flies are all done here)

Yeah, I was really on the fence about treating it. I think if it were a beef steer, maybe I wouldn't have done it. She probably would've recovered just fine on her own. Since I hope to breed and keep these girls, though, I didn't want to risk her going permanently blind in that eye. Anyway, we treated a couple days ago, caught it early, and she's looking many times better already.
F

If you are not necessarily wanting to use injectable antibiotics right off, try using some "tomorrow" mastitis medicine in the tube. Squirt some directly in/on the eye. It will not irritate it, but is somewhat of a soothing lotion for the eye membranes, as it is used up in the udder of a cow. It has antibiotics in it; but the thing is, if it is just some environmental irritation, it will help to flush it out of the eye also. We usually hold the eyelid up a bit, squirt some under the eyelid so that when they blink it spreads across the eye. We use it when we treat actual cases of pinkeye also, even ones that we put patches on.
And regardless of what animal it is, if we see it, we treat it in some form or manner. It makes the eye sensitive and hurts. Keeping them inside a barn for a few days, away from direct sunlight also helps.
You must log in or register to reply here.
Share:
Reddit Pinterest Tumblr WhatsApp Email Share Link