As y’all know, life has been crazy. We have baby goats on the way out of a doe that I didn’t truly think was bred. The one I thought was bred isn’t.

Also, after evaluating everyone tonight...(Thanks @Goat Whisperer for the reminder to check the calendar. I was focused on Calving and completely hadn’t thought about kidding.

) (side note: autocorrect changed that to kissing and I caught it!

) Jasmine should be due 3/11 for 145 days. She shows absolutely no signs of being bred. DH also mentioned as I’m checking Ligs and her udder that he thought she may have cycled last week but didn’t think anything of it.

As I’m checking everyone, I looked at my list and we had Knight escape over THREE fences for a few hours one day. We knew that he potentially bred someone and lutalysed several young does that all checked out fine tonight when I did a hands on verification. Open adult does at the time would’ve been Snowflake, Diamond, and Nellie. Diamond shows no signs of being bred and Snowflake was rebred at a later date for a Day 145 of 6/17. Snowflake’s body matches the later due date, not a quickly approaching one!

That leaves Nellie. The other does are MEAN to her. I have to work hard to give her attention without her having to face repercussions. I got ahold of her and I’d noticed that she was wide. Her udder was quite full for having been milked this morning. I got to thinking about it and her production has drastically dropped when we were treating her for mastitis a few weeks ago. I then tried to check her Ligs. I had to dig to find her left one!

I was like “uh-oh!” Not only did I fail to give cdt, but I hadn’t trimmed her hooves and she needs her delivery prep shave done. DH came in the pen to give his opinion and we started talking about her reluctance to jump on the stand for the last few weeks. We both had chalked it up to mastitis treatments. In reality, she was telling us and we weren’t listening! Her girly parts are doing some changing too.

Nellie got lifted onto the stand for a careful foot trim and some extra feed and a more thorough exam. Her belly is tight! Today is Day 138. Day 145 is 3/14. I wouldn’t have picked this buck for her so I don’t plan to keep any. I just want things to go well for my Sweet Nellie!

I did grab a few pics for y’all. 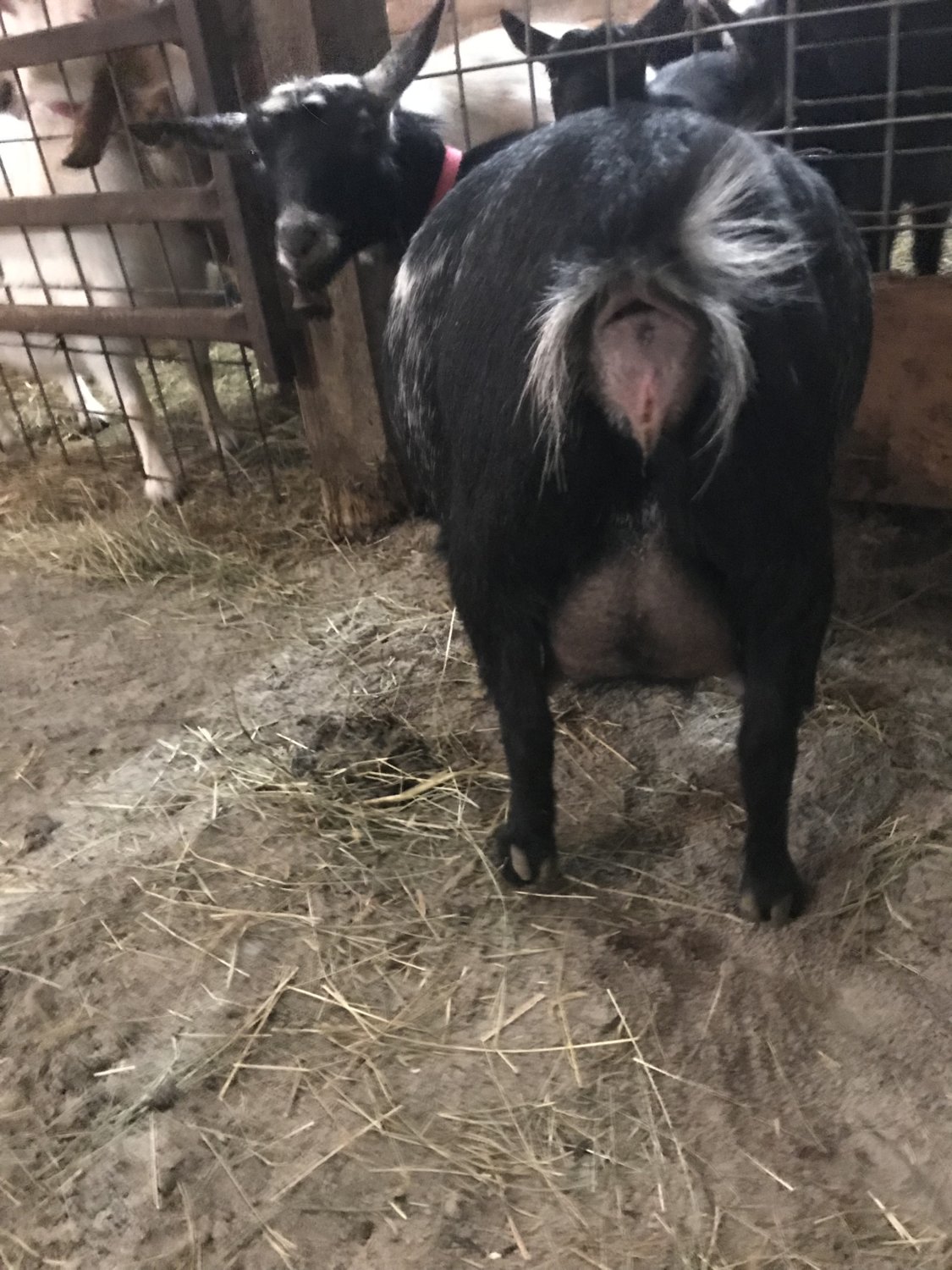 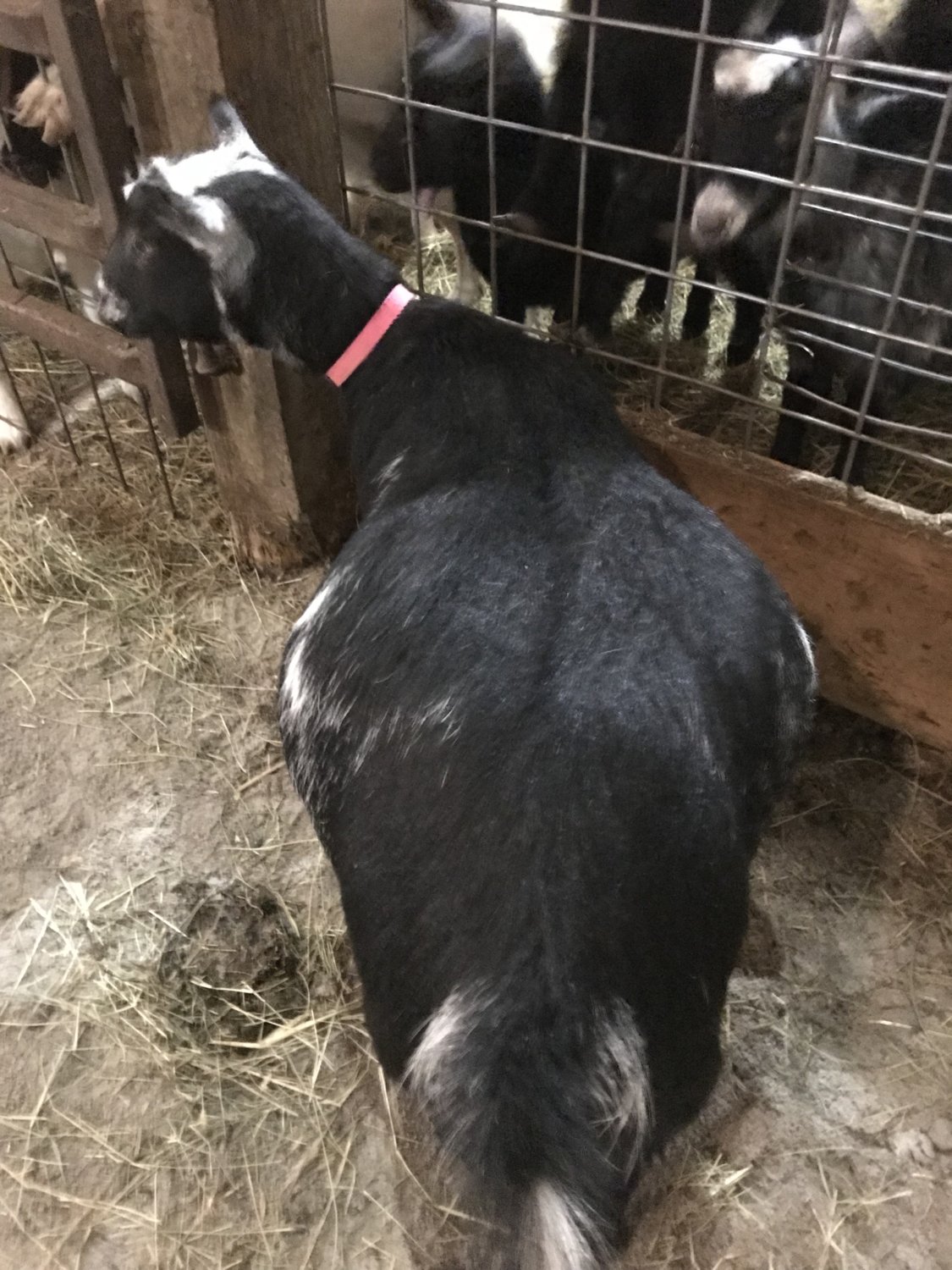 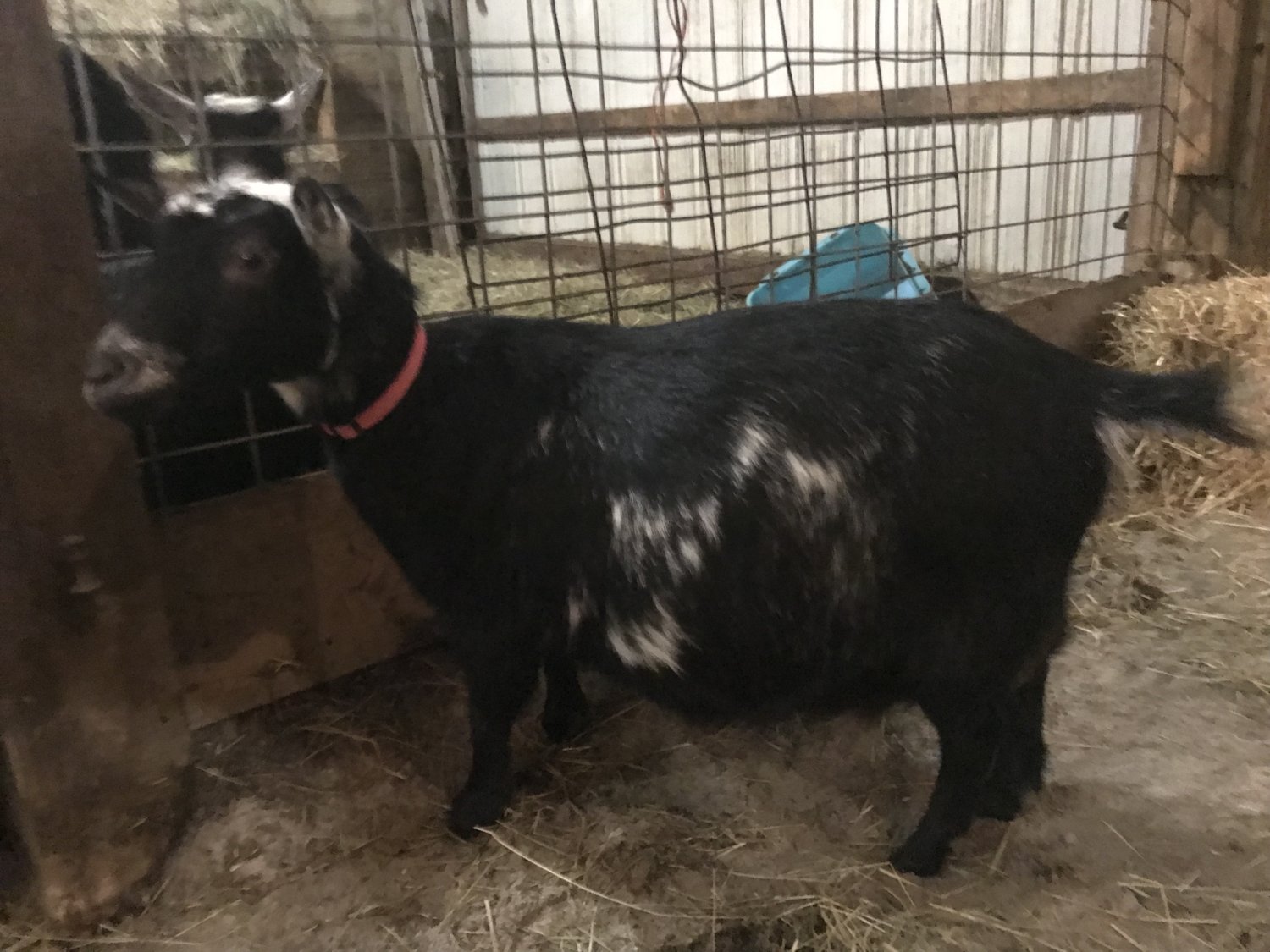 The barn just got cleaned out so the kidding stall was taken down. We will build another this weekend. Nellie is on close monitoring now.

Also, breeding for fall kids is going to be big here. Expect this thread to grow much faster then!

whoa Nellie, I think she has a surprise for you. good luck getting things done before she's ready.

Don't we all have those kind of bucks? lol. That's how Izzy's twins came about. They will be a week tomorrow.

She just wants to keep you on your toes!

for a smooth kidding season!

Today is Day 146 for Nellie. I have pics but not time to get them uploaded. She’s had every sign of impending delivery since 6am yesterday. Ligs have been gone since then. She’s placidly chewing her cud as I slowly lose my mind. -makes me think of ‘Doe Code!’ I also have three sick human kids. One with tonsillitis and two with bronchitis. I also work night shift tonight. Lol

Nellie kidded at about noon today with quads! Talk about surprised! I was asleep after working last night and DH was taking care of sick kids. Nellie delivered them all on her own. They were all clean, almost dry, and up trying to nurse when DH checked her. He woke me to check them all and I dipped navels in iodine.

2B/2D. All are nursing but we are monitoring closely. Wonderful way to start the year for our goats!

Somehow Buck is mine, kids named him when I mentioned buckskin. They wanted to name him Buckskin. I was insisted on at least shortening it to Buck.

Can I also add that of course the buckskin is a buck?! Ugh!

I wasn’t planning on keeping any of these as it wasn’t a planned breeding. Unfortunately, I’ve been unable to obtain/find any udder pics on the buck’s family. None of his daughter were freshened by the prior breeder before being sold and I was hopeful to see what he did there. I have two daughters that I retained from Caramel who has a much better udder than Nellie. I feel like God has blessed us abundantly with this many babies so I’ll probably retain the two does and see how their udders look when I freshen them. Knight is also polled so there is a chance that both does could be polled. (Not that polled is a deciding factor, just listing facts.) I’ve made the decision to sell Knight. Due to not having background that I want and having to hold him too long to get it, I won’t make use of him. His escutcheon isn’t what I want for dairy goats and he didn’t stamp Caramel’s daughters with good escutcheons. I’m on the list to get a buckling from @Southern by choice and @Goat Whisperer and I want to use that buck heavily for my Nigerian and Mini Lamancha programs. King is also exceeding my expectations and I kept a buck out of Snowflake and an outside buck that I can’t wait to see what he can do (Theo!) 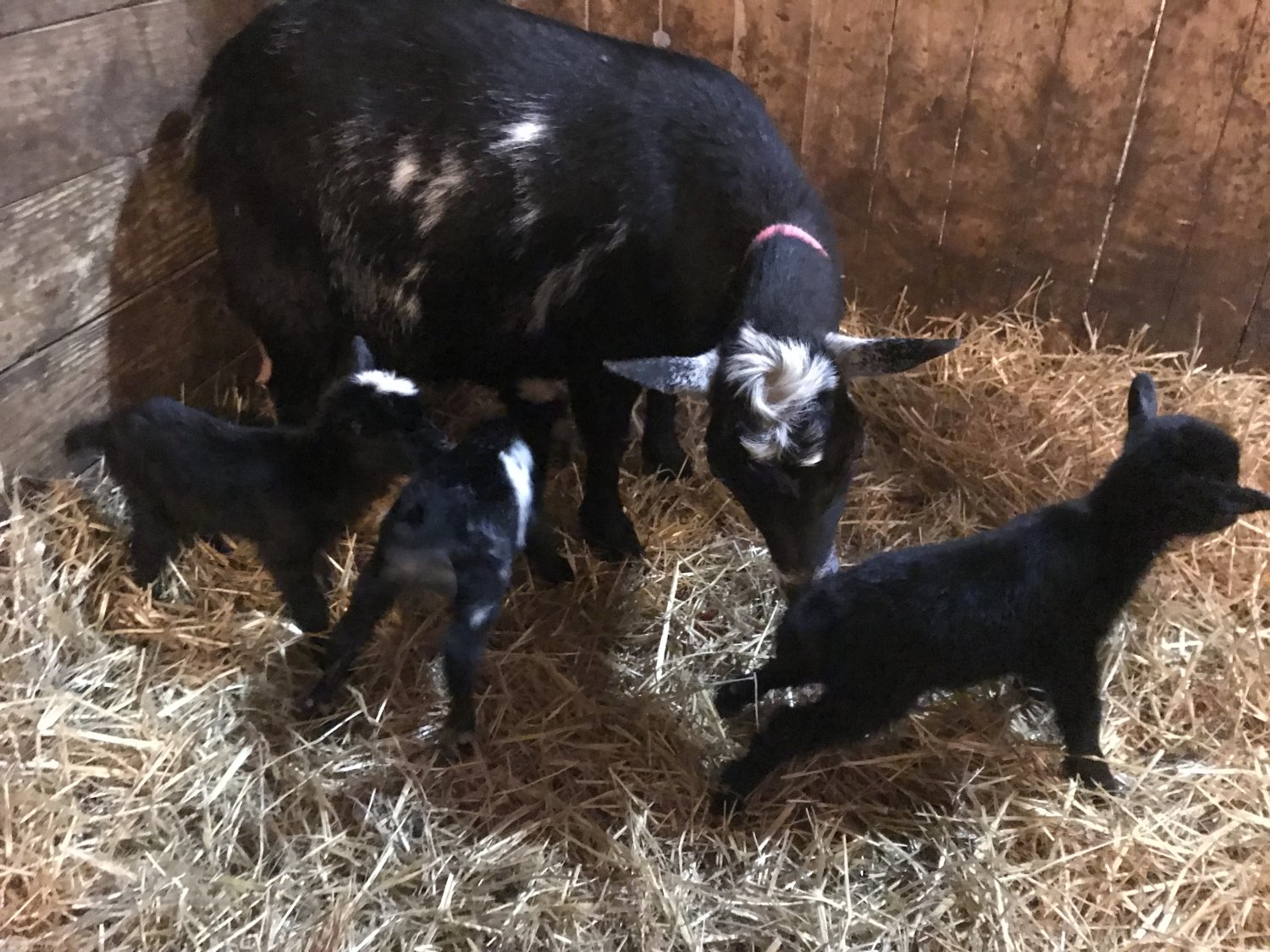 The excited K-9 crew. Feeding on my excitement of course! 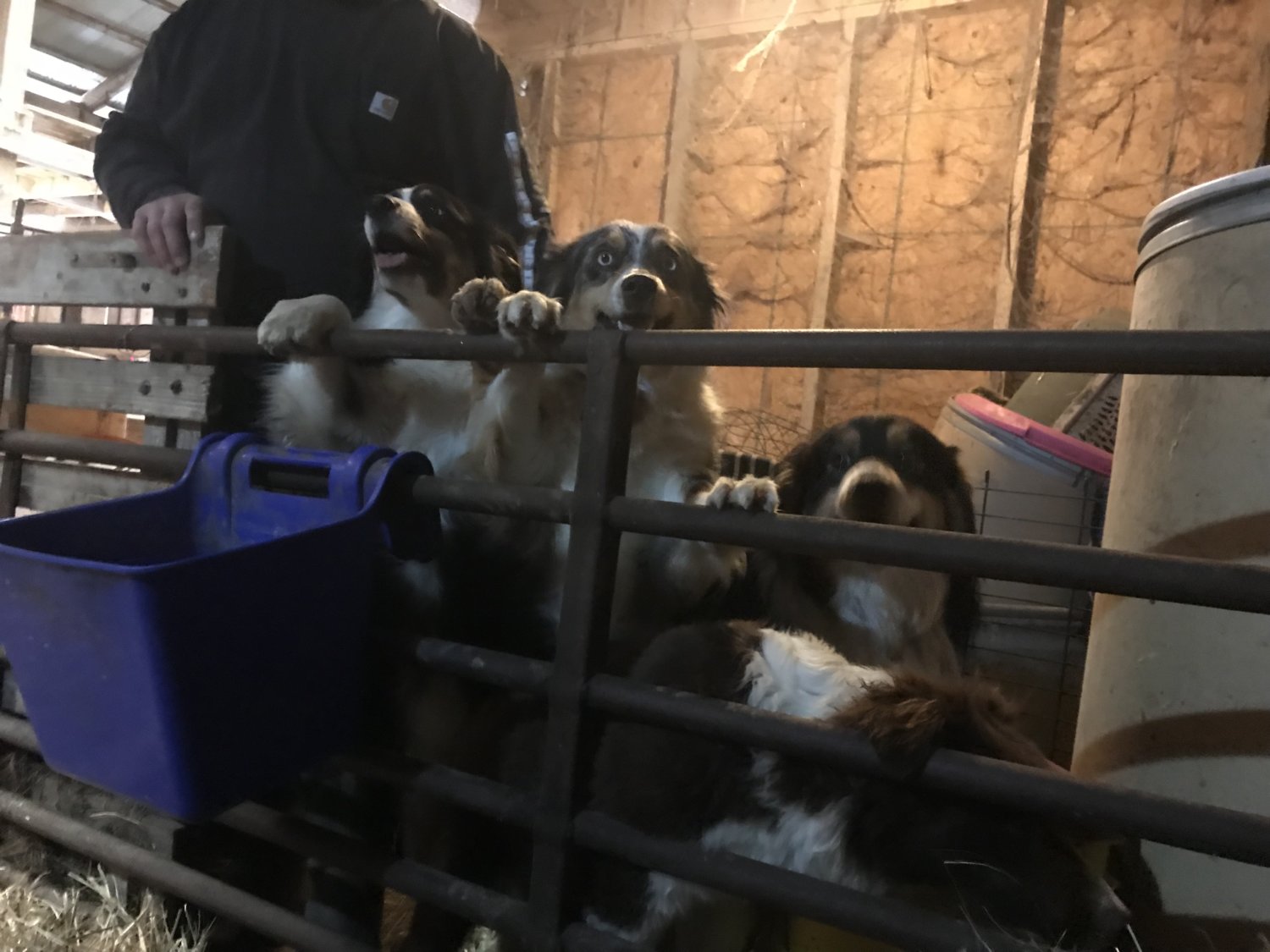 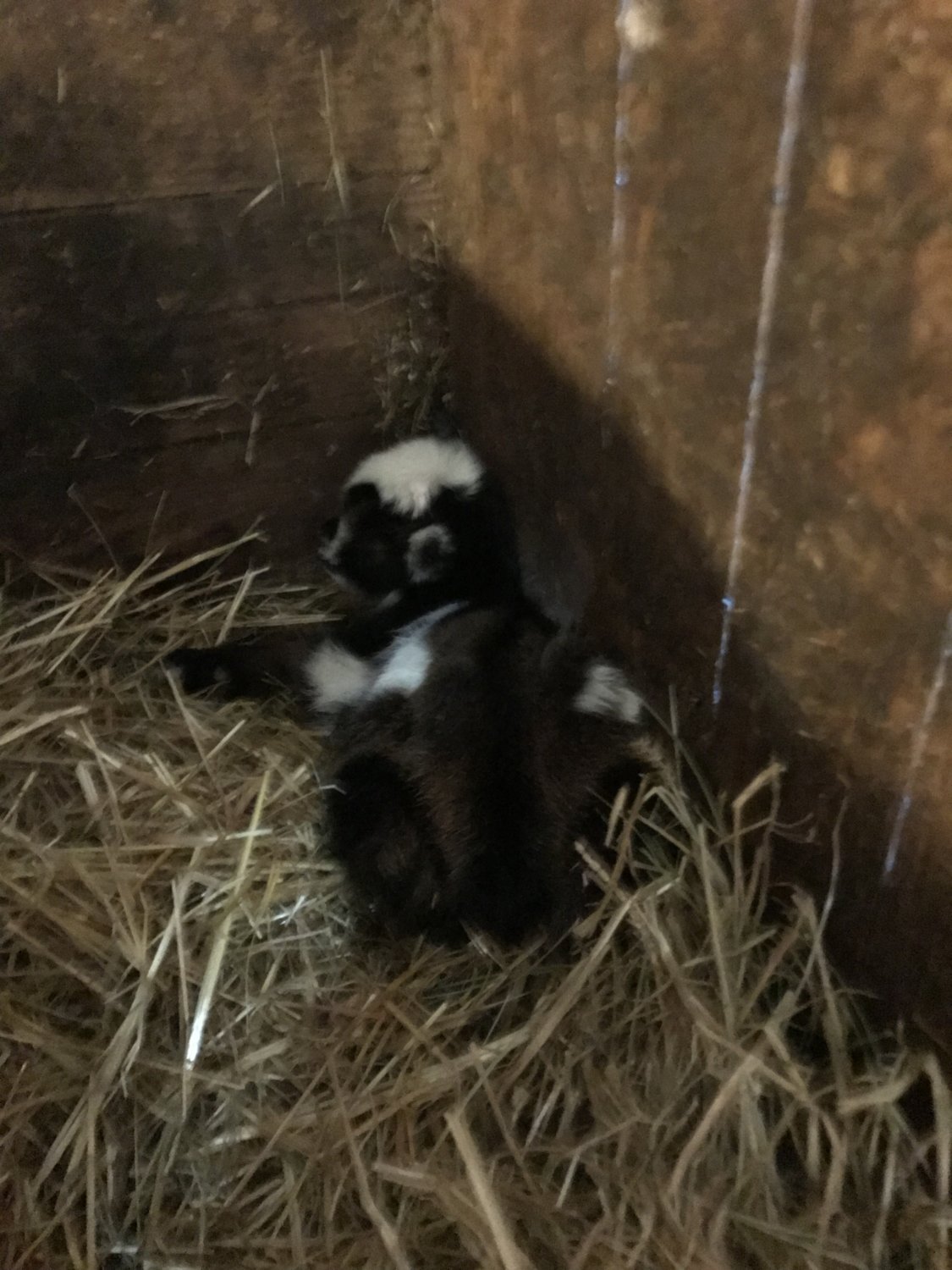 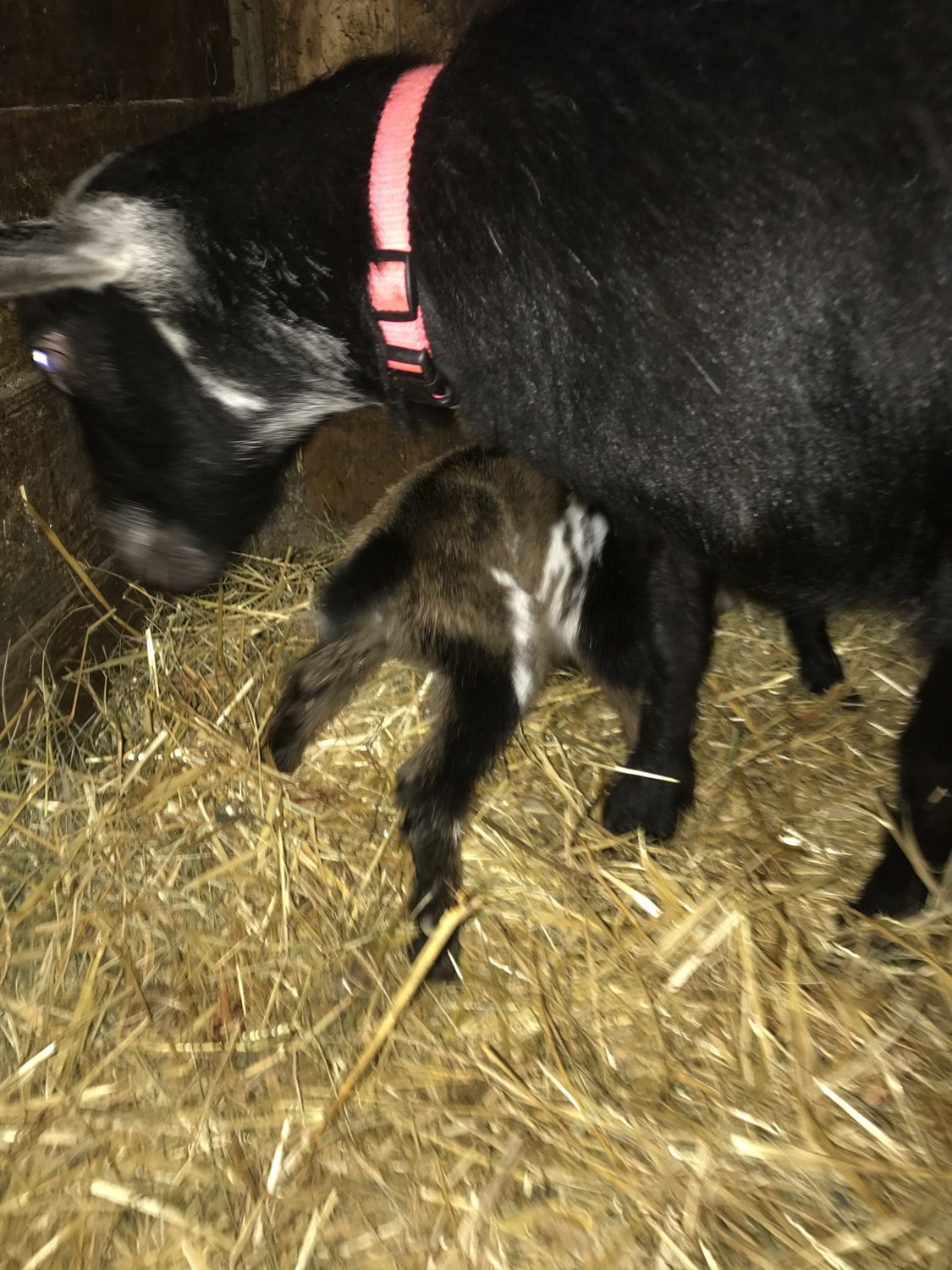 DH getting Gunner to nurse. Flower and Sweetheart are the blurs in the front. 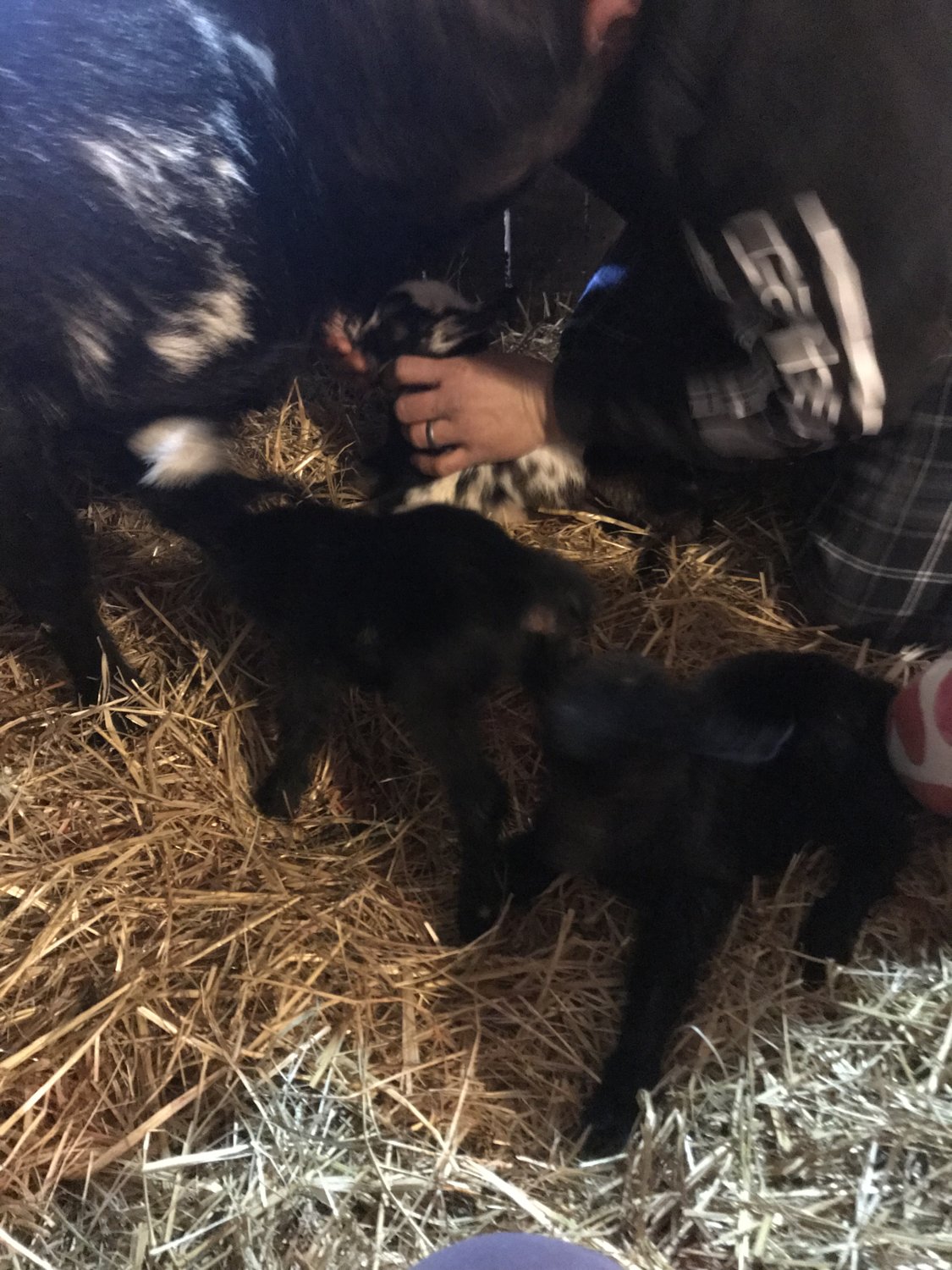 Buck is it’s Sweetheart in the background. 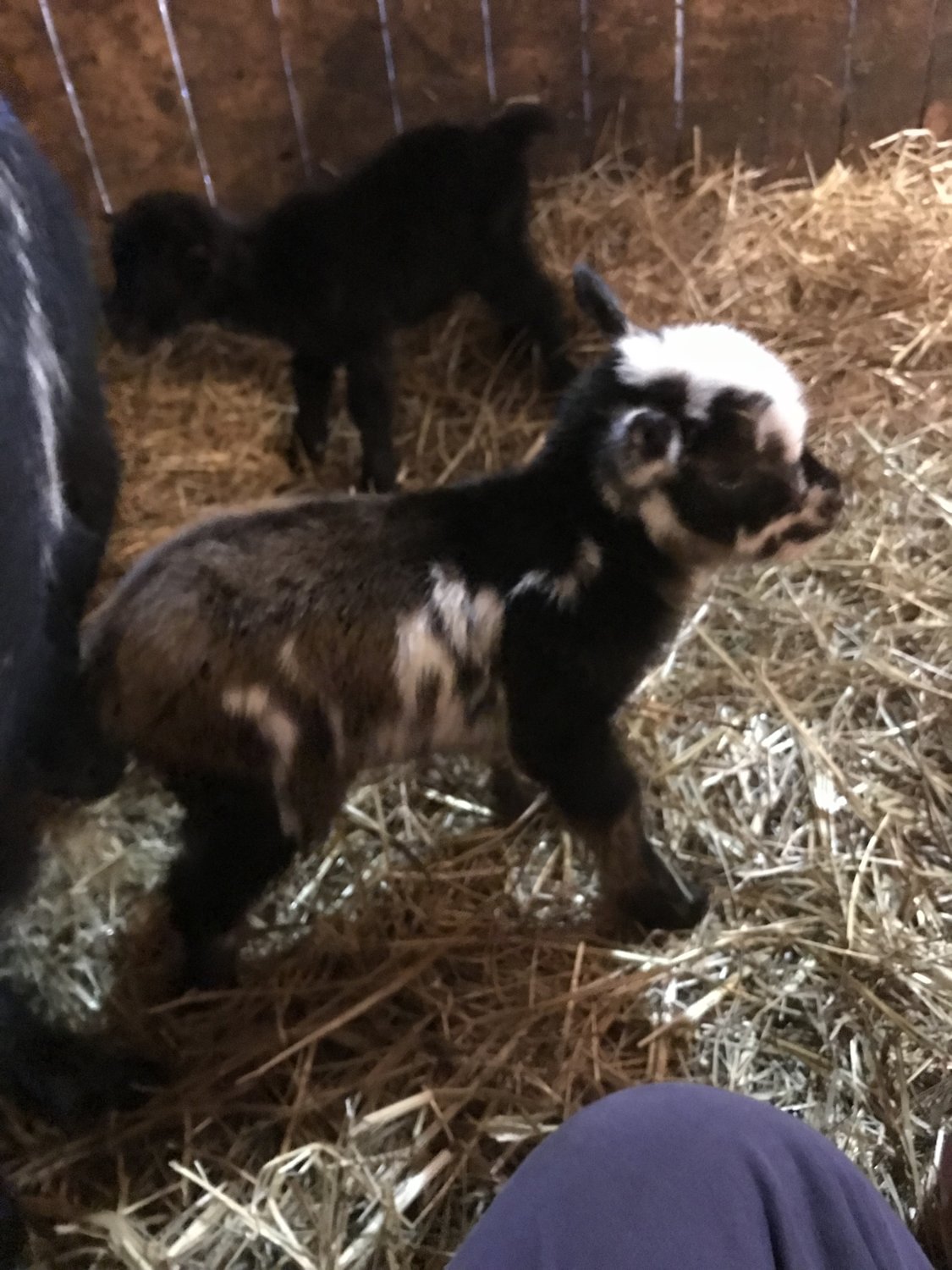 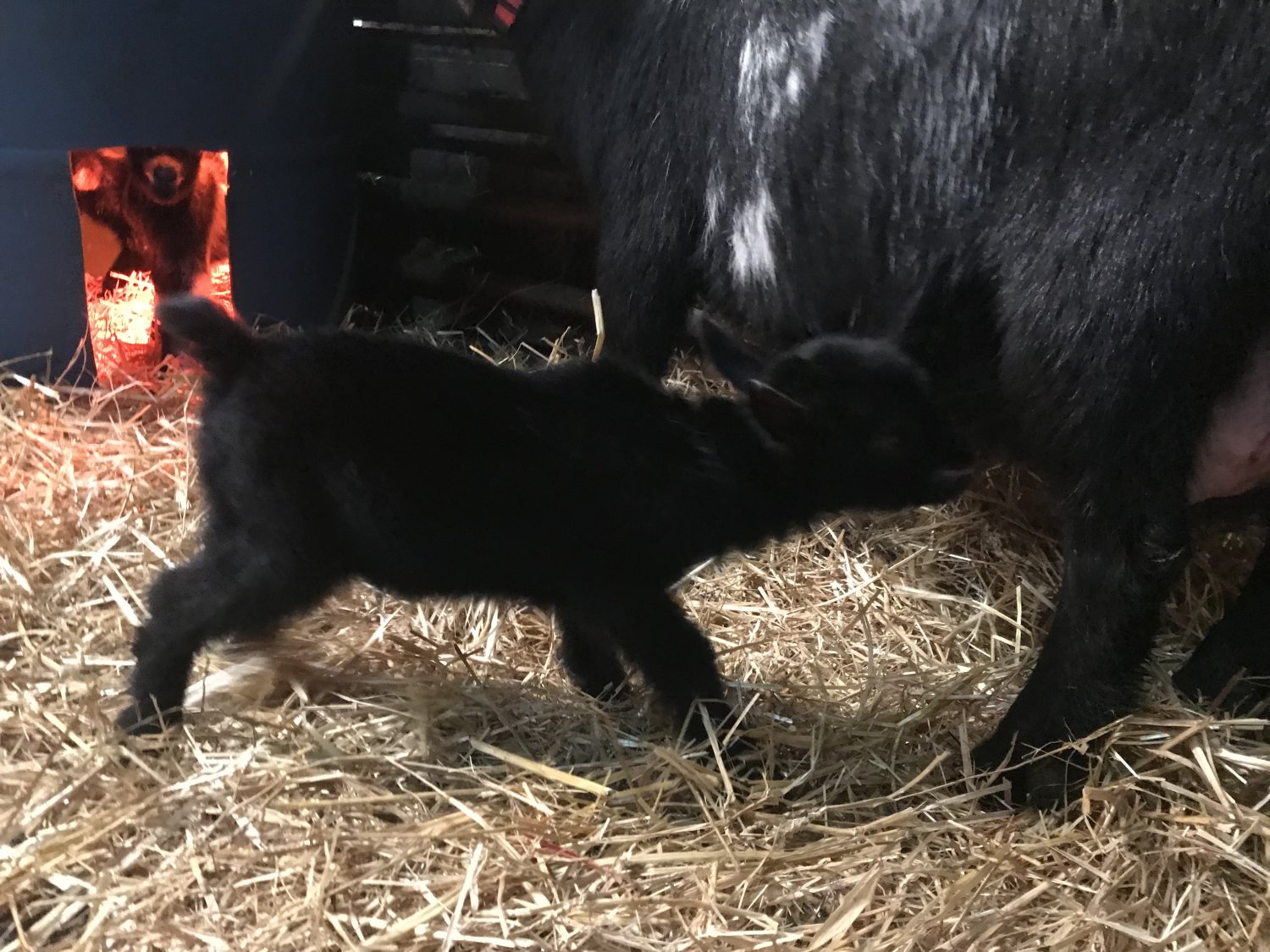 I’ll try to get more pics and keep them posted. With quads, I’ll be monitoring weights. If need be, we will pull two of the bigger kids for a few hours at a time to give the smaller one a chance.

Nellie will be fed well and we will supplement if we think it’s necessary. We will wean the two bucklings at eight weeks and start pulling the girls at night then to milk Nellie and let her continue to raise the girls. I will only milk Nellie before then if she seems over full. I may try to get a bit of colostrum to freeze though.

They are beautiful! And they look to be a good size. Hope everything continues well with them.

Congratulations! Great start. Could you post a picture of Knight again? I forgot what he looks like. Was he Jasmine's sire?

Jasmine’s Dad isn’t a buck that I own, I bought her dam bred. His name is Tuck.

Awwwwwww that is awesome. So glad she did it on her own and cleaned them, saved you some rest at least.
You will get good production from her if she continues to dam raise!
So happy the first kidding of the year went so well. You really needed a break!