Weight and price of different cattle

Hi, I have a small backyard herd of cattle and was wondering if people on here could help me out. I am going to start selling my cattle in a year or two and was wondering how much they would be worth(BTW i live in Western North Carolina right next to Georgia and can travel to Tennessee). In about one to two years this will be the age of my cattle. An 8 year old full Jersey milking cow. A 2 year old full jersey steer(wont cost anything to feed next winter. have plenty of pasture for him). A 23 month old full Holstein bull. A 26 month old full black Angus bull( at under eight months was over 600# for $1200). Last but not least, a 26 month old jersey/Holstein mix girl.None of the above cattle have been bottle fed for more than a week and all of them got their colostrum. Will try to post pics of them as they are right now at the ages of 6 year old jersey milk cow. 8 month old black Angus bull. 7.5 month old jersey/Holstein heifer. 7 month old jersey steer. And a 5.5 month old Holstein bull. If anyone could give me an estimated worth of my cattle as they are now and in 1-2 years it would be much appreciated. All have been wormed as well.Within the next month or so I will have(fenced in) 1.5 acres of good tall fescue grass,2.5 acres of good tall fescue grass, 3/4 to 1 acre of tall fescue grass, 1 acre of good tall fescue grass, and about 30 acres of land with tons of littleish trees with leaves along with tons and tons of kudzu. So and advice is also welcomed and appreciated.
J

If I were you, I'd get rid of the Holstein bull ASAP. He will be getting dangerous soon if he's not already. He should bring up to $1.40 /lb or more if he's in good shape. All of them are worth quite a bit right now, but the cattle market can change very quickly. Right now is a better time to be a seller than a buyer.
C

Thanks and he is going to be in a pasture where I dont have to handle him very much if at all until sale time. Imma try to get the pics up tomorrow of my cows. Also do you know how much a larger Holstein bull weighs at 6 months?
B

If I were you, I would sell off ALL of the bulls like YESTERDAY . All Bulls especially dairy type bulls are seriously dangerous. Many dairymen have been crippled and killed by the dairy type bulls. May not necessarily be you, but bulls have a very strong urge to reproduce and go crashing through fences to breed the nearest cow anywhere in the county. Any car on the road may end up in the ditch. Any person in the way will be in grave danger. Then come the law suits. Are you ready to loose your shirt ? Just not worth the risk of keeping a bull when AI is readily available. Best of luck to you !

If you have no plans for the bulls get rid of them now. Especially that Holstein, he's going to wreak more havoc for you than what he's worth, and it's going to start very soon. A 6 month Holstein bull may weigh around 500 to 600 pounds if he's in good shape.
C

This is the Holstein Bull. 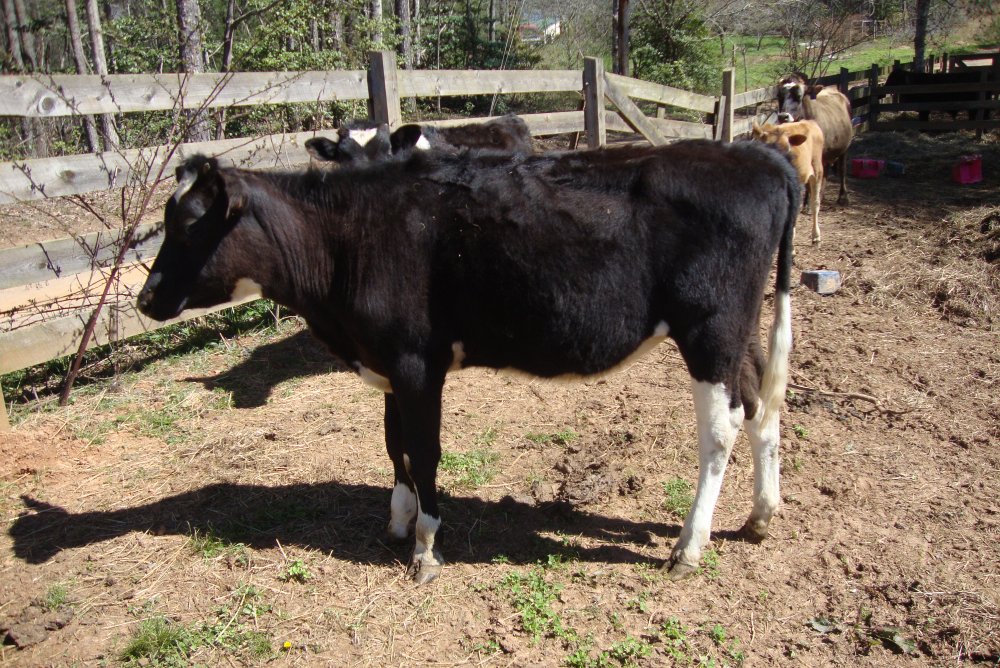 This is the Holstein/jersey cross heifer 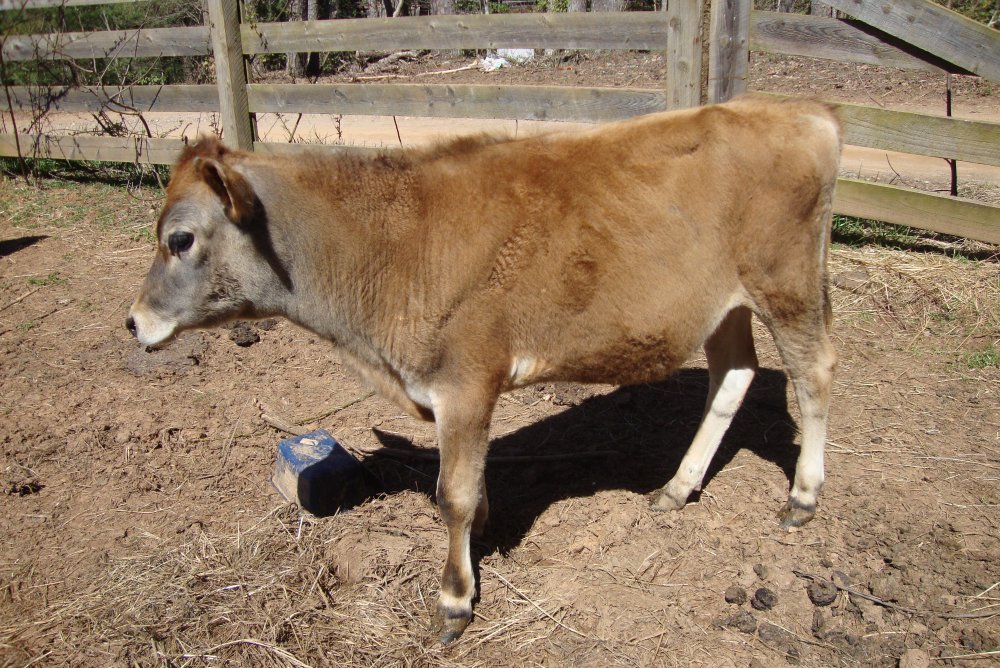 This is the jersey steer. 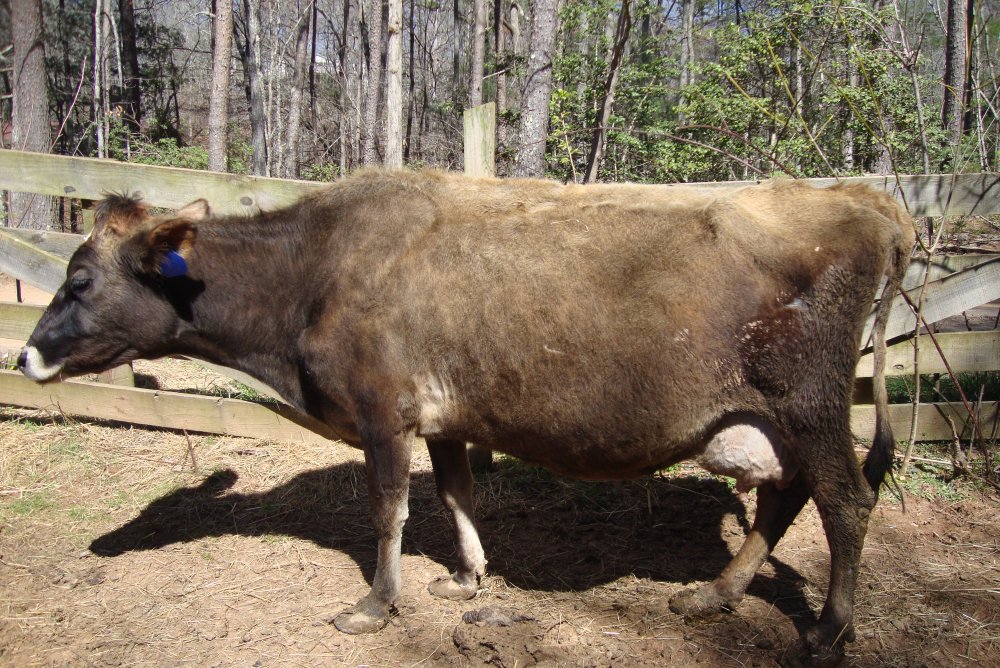 This is the Jersey mom.Feed her 2-3 gallons of grains and corn but she still stays skinny 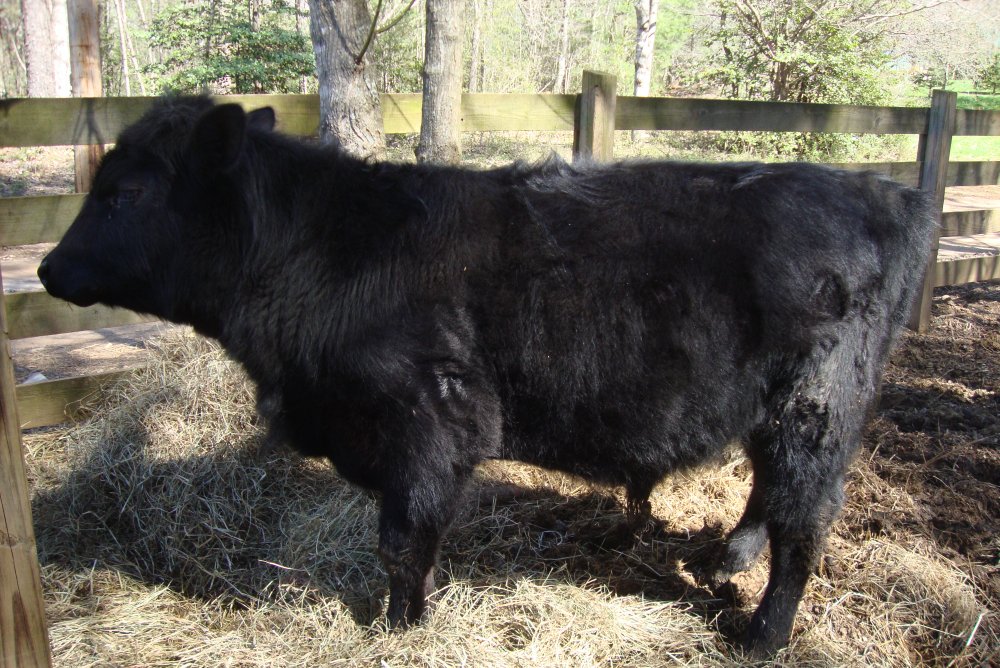 This is the Black Angus Bull. 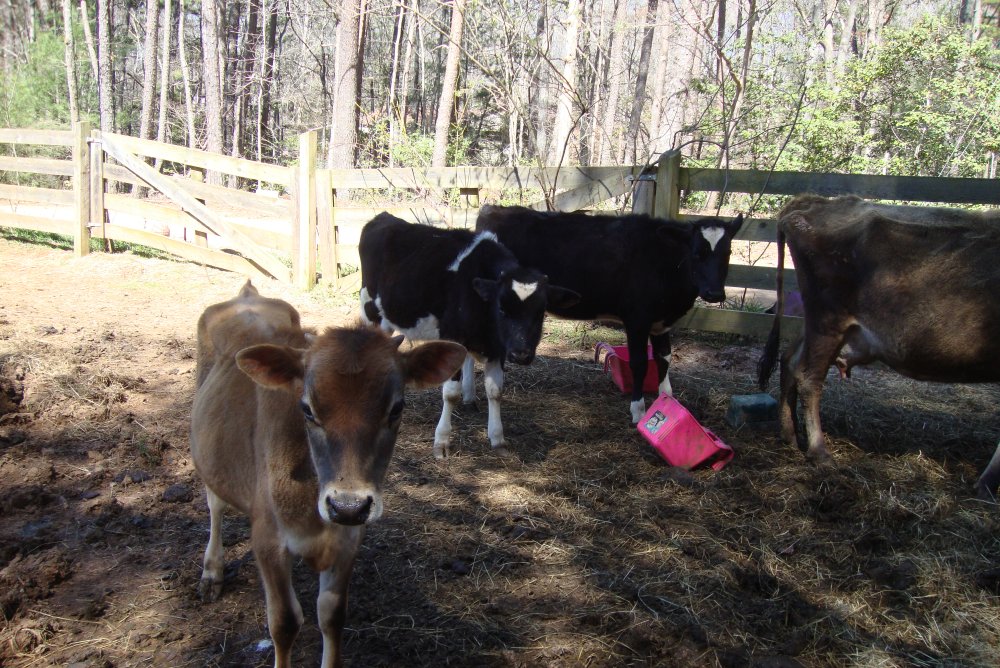 This is a picture of them. 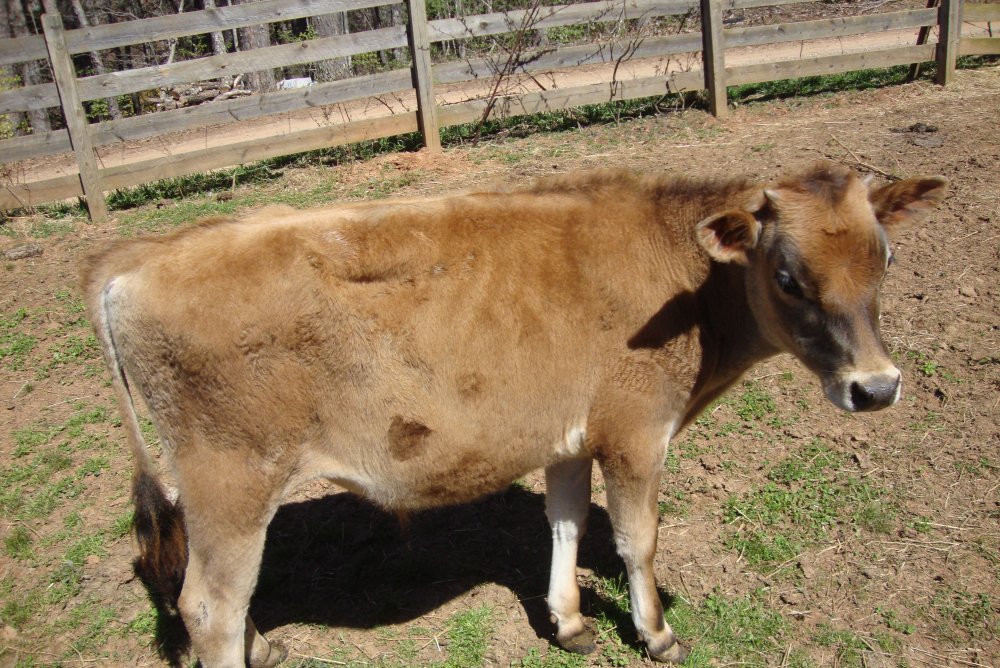 Another pic of the steer.

Now my questions are: when a female is in heat does the one in heat ride the other ones or do the other ones ride her?; How much would I be able to sell these as is at or near the Sweetwater TN livestock auction or to other local farmers in the hills of Western North Carolina?;How much would these sell for in a year or two if the market were to stay the same? At what age will the Angus bull be ready to do his mission?; What is the youngest reccomended age to breed a Heifer? Thanks in advance.

Don't take this too bad but here's what I'd do:

Sell the bulls ASAP. That Angus bull is not worth keeping as a sire as he has really poor structure that would make his calves be just as bad as him, and being poor stock even as beefers. So I wouldn't worry about wondering when he'd be ready to breed. If you can't get rid of him quick, steer him. If you don't want to get rid of the Holstein either so quick, steer him too, and as soon as possible. The longer you wait the higher stress the castration process will be. Then feed them up and get some weight on them. Then you might consider sale of them in a year when they're feeders. But if you're going to keep them as bulls, get rid of them now. Both of them.

That Holstein bull looks a bit lighter than 500 lbs, I'd peg him at around 400 lbs (the Angus bull will be a little heavier, like around 500 to 600 lbs), since that hair can hide a lot of the "look-like" weight estimate.

The girls you can keep, they look like they have potential as nurse cows for some calves you'd pick up from some dairy farms or sale-barn as unwanted calves, which you can wean and sell off later.

When the girls are in heat it can go either way. But the one that is in standing heat is the one that will stand to be mounted (stand under and not try to move away). When they're not in standing heat but going in or out of heat they might try to mount others, and their vulva will also look more swollen than normal. You could tell which one is in heat by the special attention that the males pay to her.

If you want to keep the females get the heifer separated from the bulls to avoid any early pregnancies. Nothing's worse than a heifer calf that is calving too early and has potential for calving troubles when she's ready to pop. The best age to get that heifer bred is at 14 to 15 months, no earlier.

For prices you'll have to check with your local auction mart to see what current prices are. There's no guarantee that prices are going to remain the same next year as they could begin to decline as per the 10 year cattle cycle, and there's no telling if the estimated price for animals that are older will be what we may say they are now. The difference in prices could be as much as a dollar or 10 cents.
C

In what ways does the black angus have bad structure.(not trying to sound rude) also when i bought the holstein bull as a baby, the farmer said he was a really big one(getting another holstein bull calf today) and he was raised on cows milk not formula, i feed him a gallon of grain and corn a day and he has had unlimited grass/hay.Do you have any imput on my other cows? Thank you for taking the time to reply to my post. It is greatly appreciated.
C

The other farmer that i bought the ba bull from said that the bull looked like it weighed over 600 lbs. it might be the pictures makin them look skinnier.
J

It's really hard to tell sizes from pictures, so no guess from me. As to breeding your cows/heifers---if you really want trouble, just let the Holstein bull breed either your Jersey cow or the heifer. Holsteins are notorious for very large calves, and breeding one to a Jersey would be disastrous. If you don't mind a huge vet bill, and the prospect of losing a calf and probably the heifer or cow, just keep the Holstein bull around. I notice that he's even got horns yet. You're playing with fire!
You must log in or register to reply here.
Share:
Reddit Pinterest Tumblr WhatsApp Email Share Link