A NEW DIRECTION FOR THE OLD RAM

POST 2. Examining option 2: YOU CAN CHOOSE TO BE “A BREEDER OR A FEEDER”?

Have you considered the best path for you?

At the time of our fist farm we had chickens, ducks, pigs, goats, ponies and a cow. But all of our feed was via my job at Kellogg, where I got reject and damaged stock via my job. Without this “free feed” would it have been viable? Even though we sold eggs and goats it would have been a “loss making” venture.

So before you invest in livestock, consider which path is the one for you from a finical outcome perspective.

Option 2... Is about reducing your cost of living, so a veggie garden and orchard are top of the list. Chickens /ducks are next on the list we had a good market for duck eggs to the Asian market for “pickling” and a regular sale for Chicken eggs every week ,because even in those days people appreciated “fresh farm eggs”(remember this is almost 40 years ago).

First you have to work out just what you consume in a 12 month period. Once you eat your own chickens, you will “hate “the idea of store bought. Next is Pork, Lamb and Beef, how much do you consume over a year? Let’s say your farm is between 5 /10 ACS, breeding your food is not really an option because your COP (cost of production) could be twice the cost at the supermarket. Even on out 2nd farm of 25 ACS we sent our cow (Betsey) up the road to a neighbors’ Bull. We were however breeding performance tested goat Bucks for sale for the production of Goat meat along with farmed kids for the local Goat meat trade. We had also developed a flock of Naturally Colored Sheep (Corridales) with fleeces selling to spinners and weavers. They would ring and come to the farm, pick out the fleece and I would shear it for them on the spot.

Buying a “weaned “lamb, pig, goat or calf and feeding them until the “Fall “mainly on the available grass, is a very “cost effective” method of reducing your cost of living. It’s only until you take the “next step” that it becomes economically viable to proceeding to a breeding project. I know that everyone wants to be a “Stud Breeder” of a breed that has caught there eye, but you need to think “rationally” about what you are trying to achieve here.

Meanwhile down on the farm: The trip to the sale this week resulted in the purchase of 6 Dorper/ Border Leister Ewes, two of which were showing in-lamb, they are in light condition and have a had a pretty tough time of it, so I just shore off of the “rough” and finish the job after they lamb and put on some condition. The hardest sheep to shear are the ones in light condition, a fat sheep although heavier too drag onto the boards is a lot easier to get the fleece off.

This morning when I rose about 1 hr after sunrise I noticed the weather was “not to flash” away to the South-East, a look at the radar did not show anything amiss but I let the lambing ewes into a Woodland Paddock just the same mid-morning, come 1 pm and a Southerly change swept through with rain and some Snow-flakes by then the air-temp was below zero in the wind so my decision was the correct one, BTW, it’s not the cold rain which kills new lambs it’s the “wind” that chills them .

Don’t forget if you are new to the thread, return to the start so the context and the history make sense...T.O.R.

I guess we are still in the very baby stages of getting our operation off the ground. I know our sheep will not make us a living, not on 8 acres, but i would be happy to have them break even.

The ewes pictures, that was taken at auction? I find it interesting that they are on an elevated floor, instead at ground level on dirt.

G'day and thank you BM,I am curious as you where you put consider yourself in the three farm types I described in the first part?

The ewe picture was taken from above in our shearing shed,its all steel and a "raised board" type we purchased it about 20 years ago from an Angora stud which was selling all their equipment,it was one of the "best " purchases we ever made.The new auction selling center is only a year old and is all under cover with excellent un-loading and loading facilities (I will take a photo of it this week when we go over). 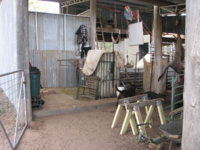 WHAT A BONUS.It's been 8 days since we got our second lot of ewes home,this morning one of them turned up with "twins".
It just goes to show you should always consider an older group of ewes if the "price is right".The second group of six cost $86 each,as you can see they were joined to a B H Droper,unsure of the sex yet,but it does not really matter,even if they are both Male they will make a $100 ea when we sell them.

I snapped a couple of pic's of our selling center,they had about 5000 hd to sell on the day,prices were too strong for us to buy any,but there is another sale next Wed and who knows?...T.O.R. 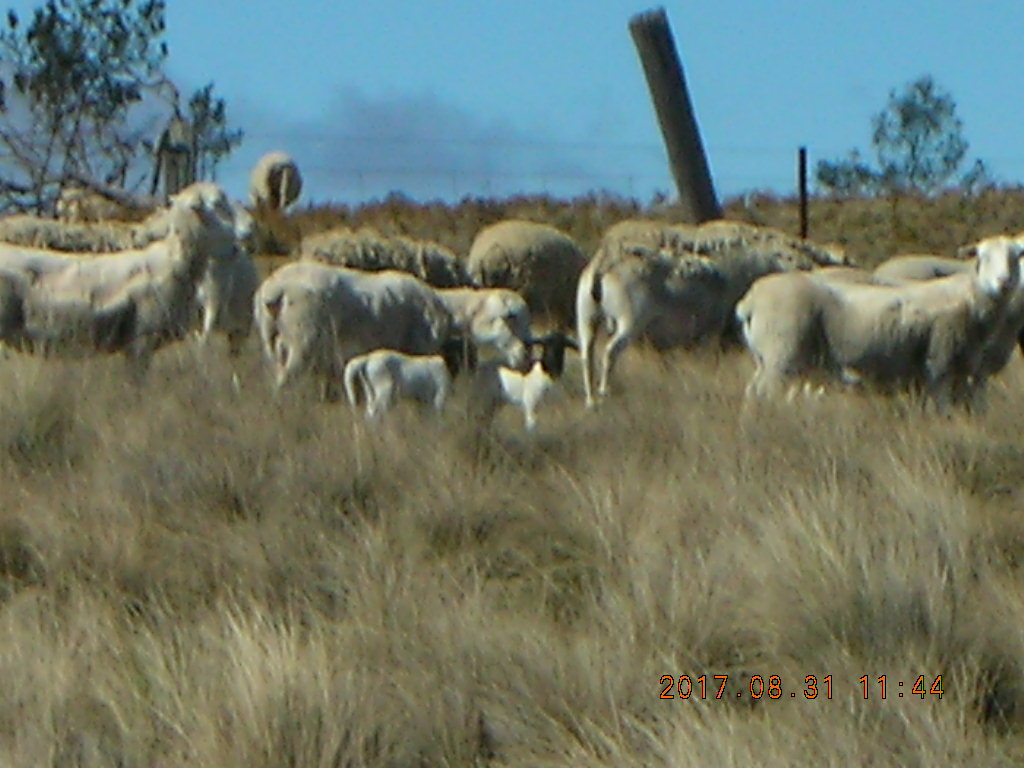 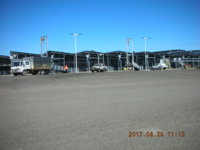 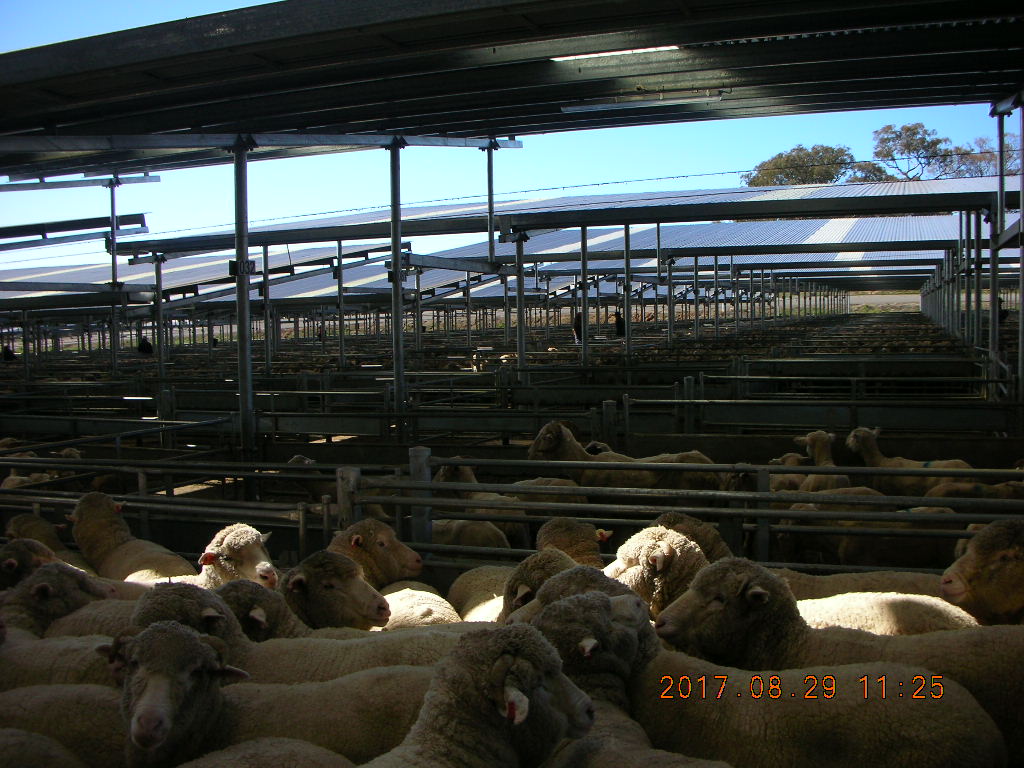 I recall some advice I heard long ago, “IF YOU FAIL TO PLAN, YOU PLAN TO FAIL”.

Start with a satellite photo of your farm, drawn in your boundaries, existing fencing, water points and house, shedding, yards, etc. Identify each paddock (name or number).Think about how you work your stock, is there a natural pathway to get stock from any paddock to your yards, sheds etc, or is it a “nightmare” in the making because whoever designed the layout did not consider that sheep have to be shorn, drenched, foot trimmed ,etc. Sheep learn by repetition so if you always take the same path from a given paddock to the sheds in time it will become a lot easier to move them and BTW ,your dogs will know what you are setting out to do as well and this saves a lot of” wear and tear” on the farmer.

Draw up a list of what’s good and what’s bad about the layout of your farm as it currently stands and how you can make it better, this will be the basis of your plan, add a time frame for making the system better ,some short ,some long. Prioritize the tasks ,try to complete one before starting another although routine tasks will come up and may make for slow going at times, because there are rules and regulations governing the way your farm is run and they need to be “complied “ with to avoid problems with the local agencies...T.O.R.

A handsome pair you have there. What a nice surprise.

I suppose our farm is between #1 and #2. We raise our food because it tastes better and we enjoy it. We sell eggs which covers the cost of feed. We sell lambs but are in the hole there. Trying to plant and build pasture to help out on costs.

Moving them from one pasture to another is easy. I just call them and they come running. We will have to lay more water pipe. For now I drag a water hose to 2 pastures.

It should be the wise old ram

G'day and thank you for reading and responding.
I suppose BM that the sheep are #1 and the rest is #2?...So it would be interesting to break up the total cost of both into#1/2# and to work out the division of labor of both.

From a labor standpoint the new waterline seems to be a priority,I am unsure of the size of the flock,but how many ewe lambs would it take to finance the job?It could be well worth it to contain the increase in the flock for one year to reduce the labor required into the future.

#2 Are any of the savings made at the supermarket directed at making that part more efficient by way of "say" improved poultry breeds? #1 I assume you have to house and feed the flock over winter?Perhaps instead of increasing your feed and labor for the full 12 months you could instead buy a few lambs in the Spring and sell them in the Fall,this way you could be much more selective in the stock you carry forward as the basis of the flock in the future...

It has been my experience that there is a tendency to try to "save everything",rather than accept the fact that in Nature there are some which should "never survive" as a way of protecting the species..T.O.R.

Soon we will examine the increasing govt regulation of farming livestock at all levels,down here we are about to get a range of new laws which every livestock owner will have to comply with (that is unless they only sell on the "black market).

We have battled green briars, slashing with machetes and dragging them out of trees. We have 2 one acre pastures that we are planting to grass. I take my wagon and a shovel out on the roadside and dig Bahia, then sprig it. We have one pasture sprigged, started on the other one. We bought 150 pounds of Kentucky 32 fescue to sow in the shady areas. We bought 25 pounds of Dutch white clover, 50 pounds of white Apache arrow leaf clover, 15 pounds of chicory. 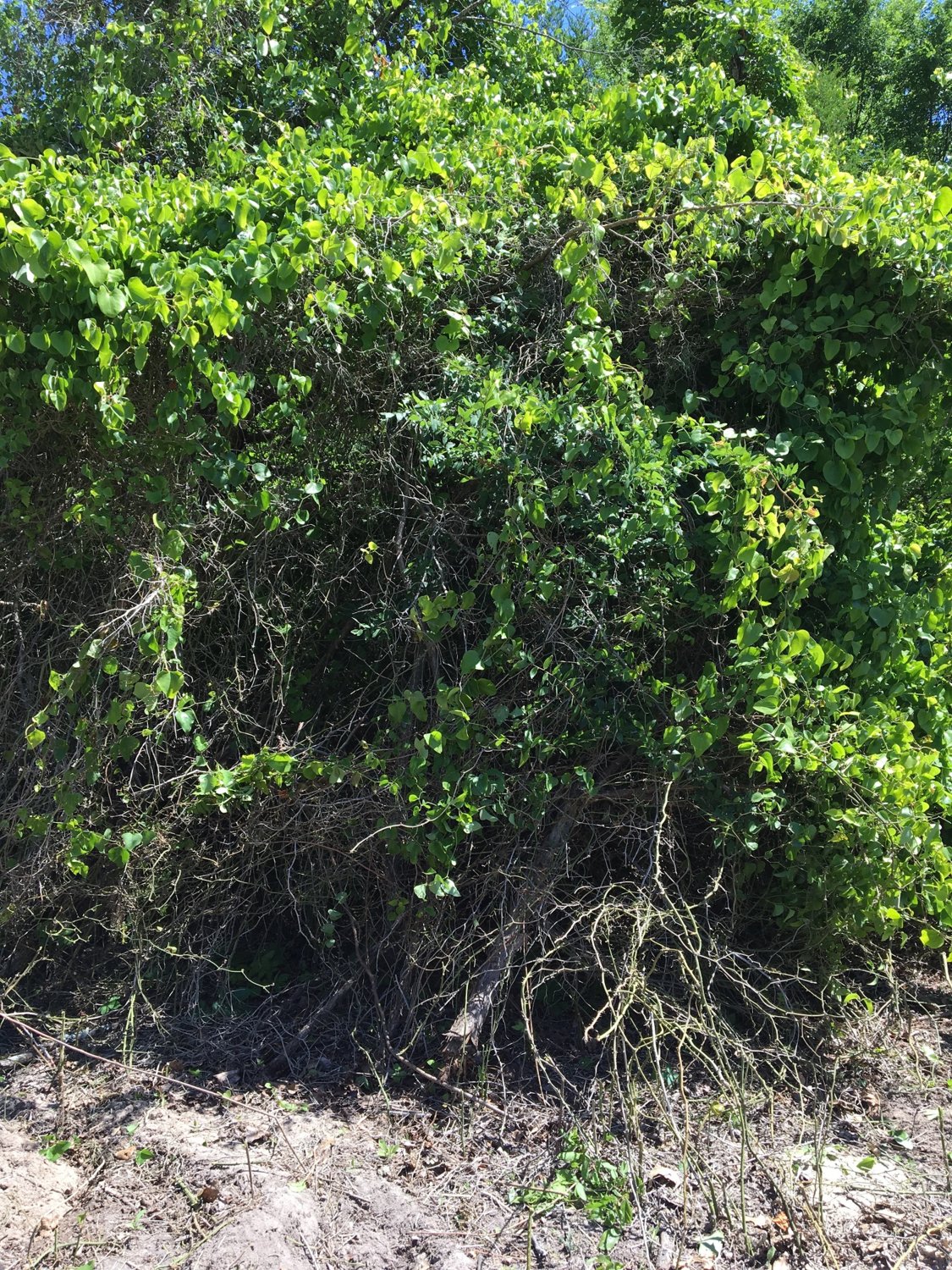 These pictures were taken March 2017. The strip of trees were full of briars, we have since pulled them out and opened it up a little. There is a nice patch of Bermuda grass that I sprigged last fall, but the sheep don't want it and would rather have the Bahia.

Panning right... That's the garden fence on the right. We cut a half dozen of the small trees in this picture. 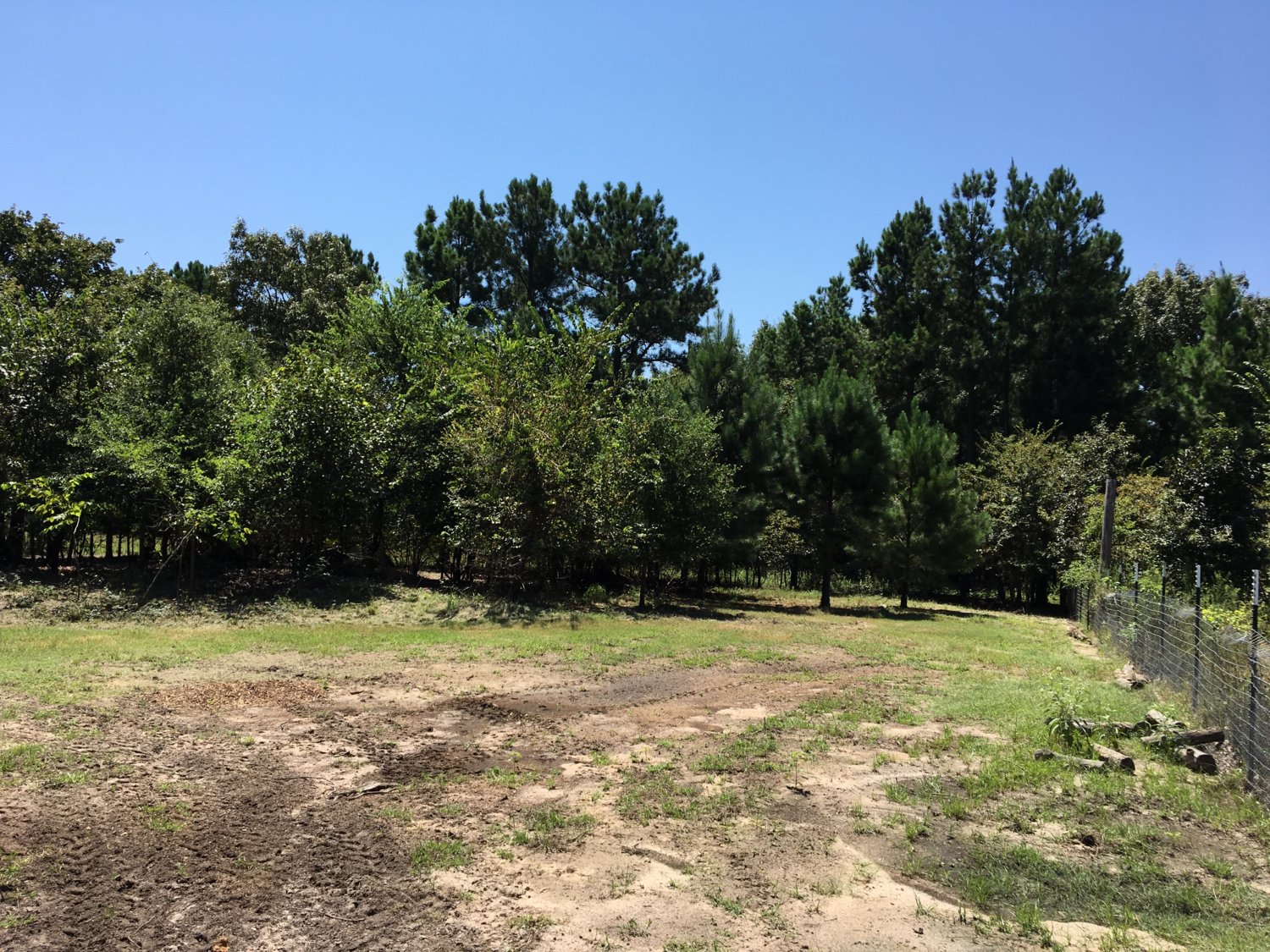 We finally finished the fence which gave us more area. We had to hack out way through, cut trees, chainsaw, then bush hog with the tractor, and slash with machetes. This newly fenced area takes in a pipeline that is open (no trees) 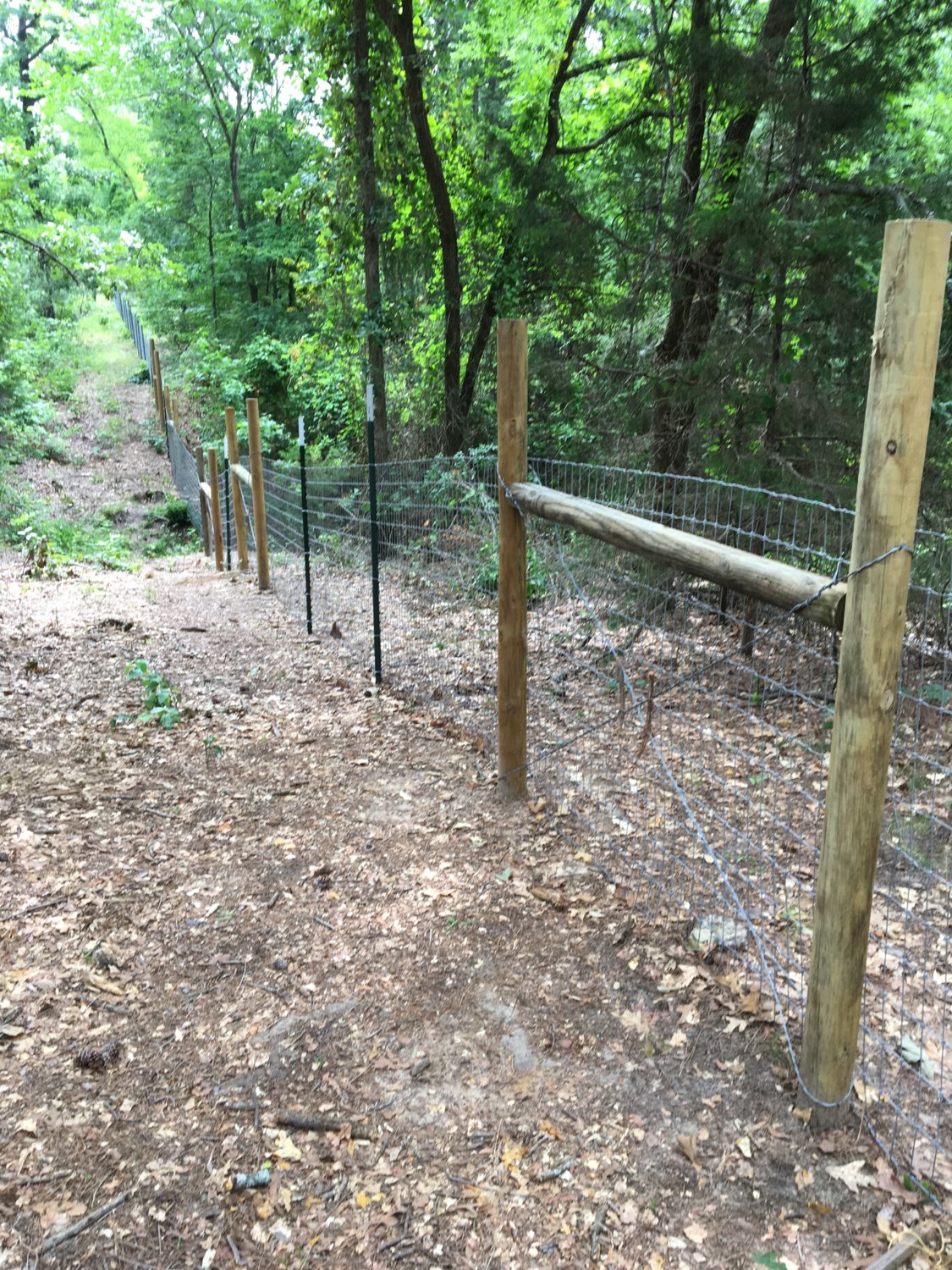 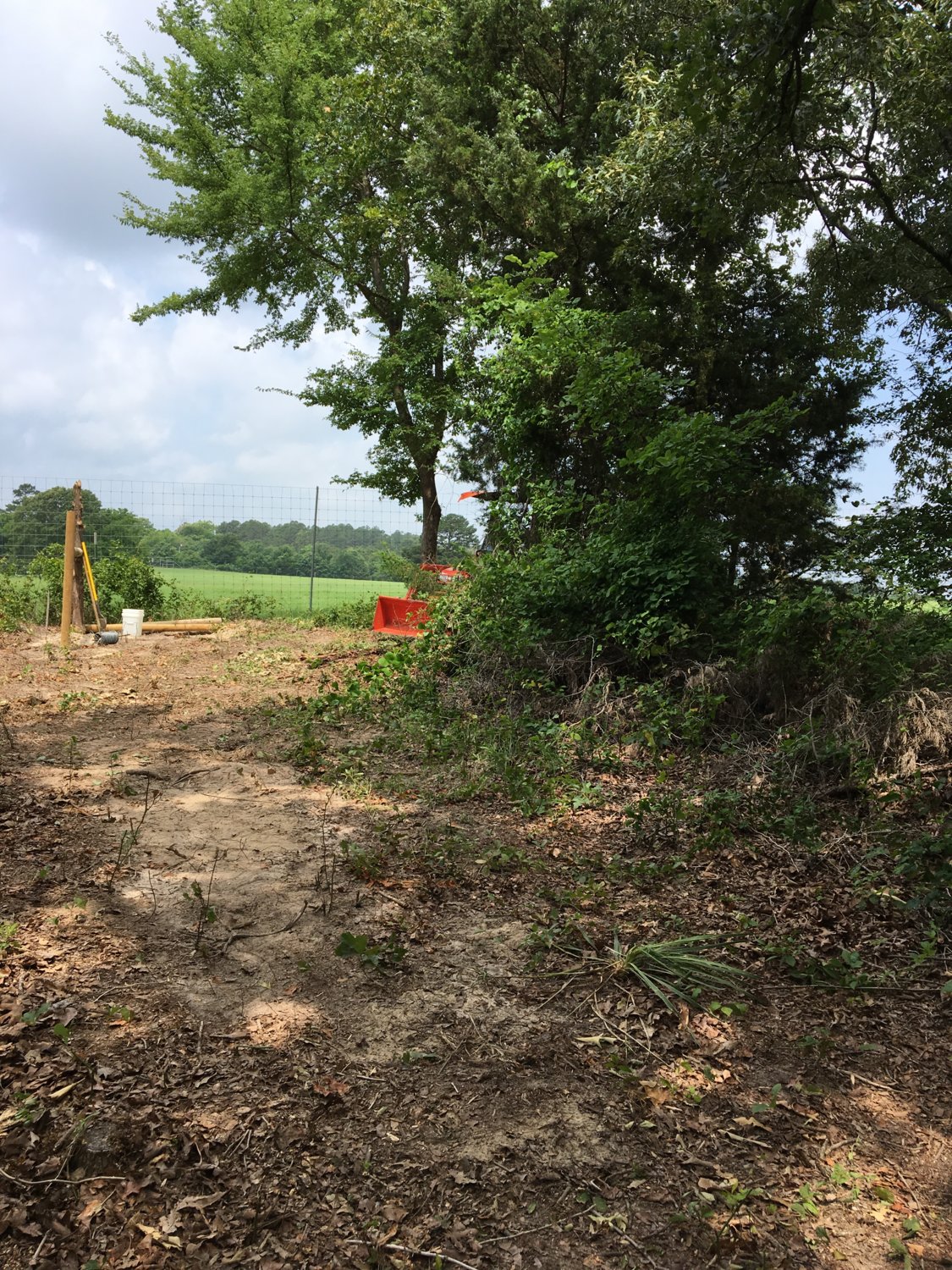 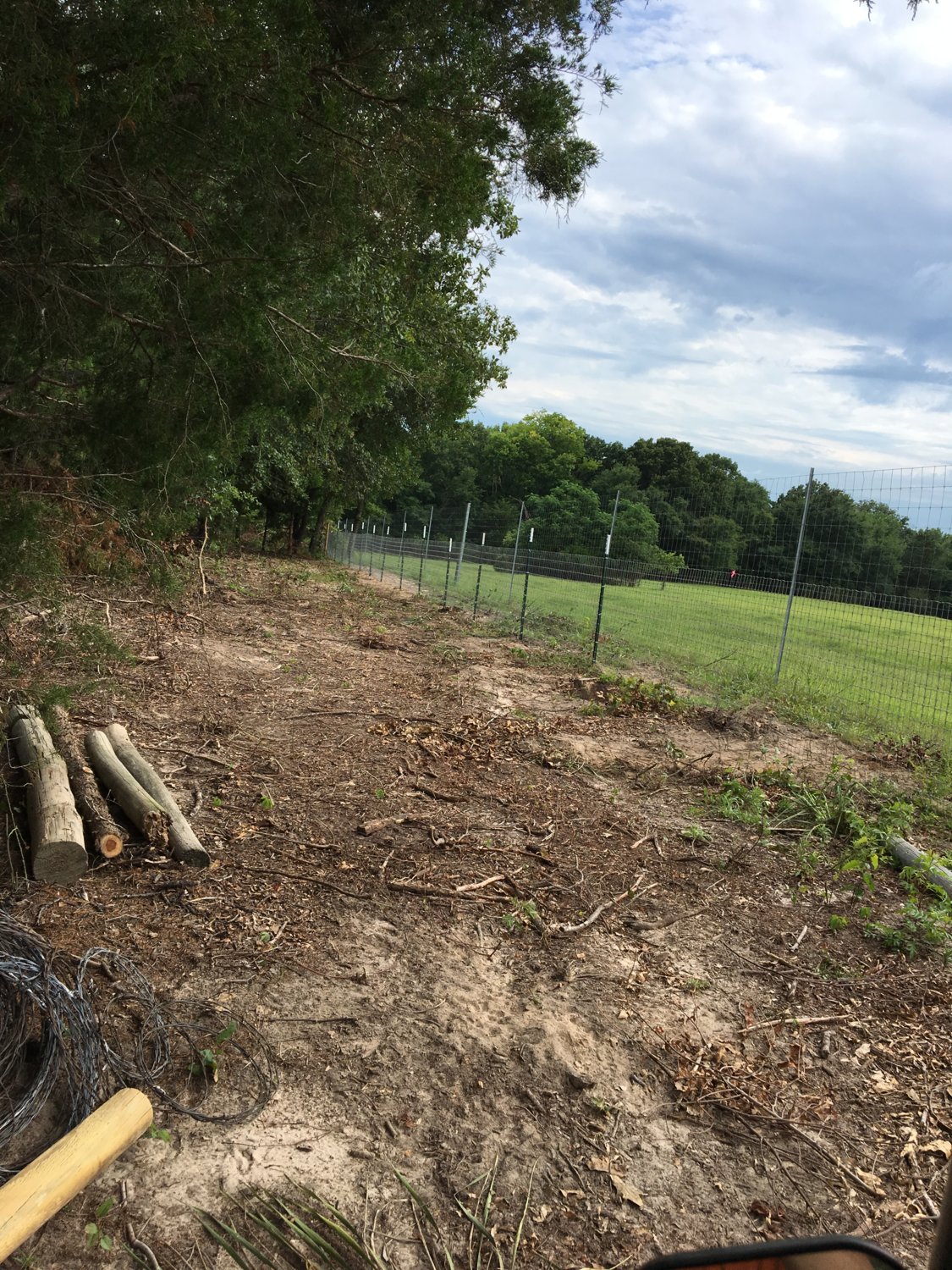 The pipeline, we let it grow up and turned the sheep out on it. When they cleaned it up, we bush hogged it. We'll let them graze it close right before sowing seed. 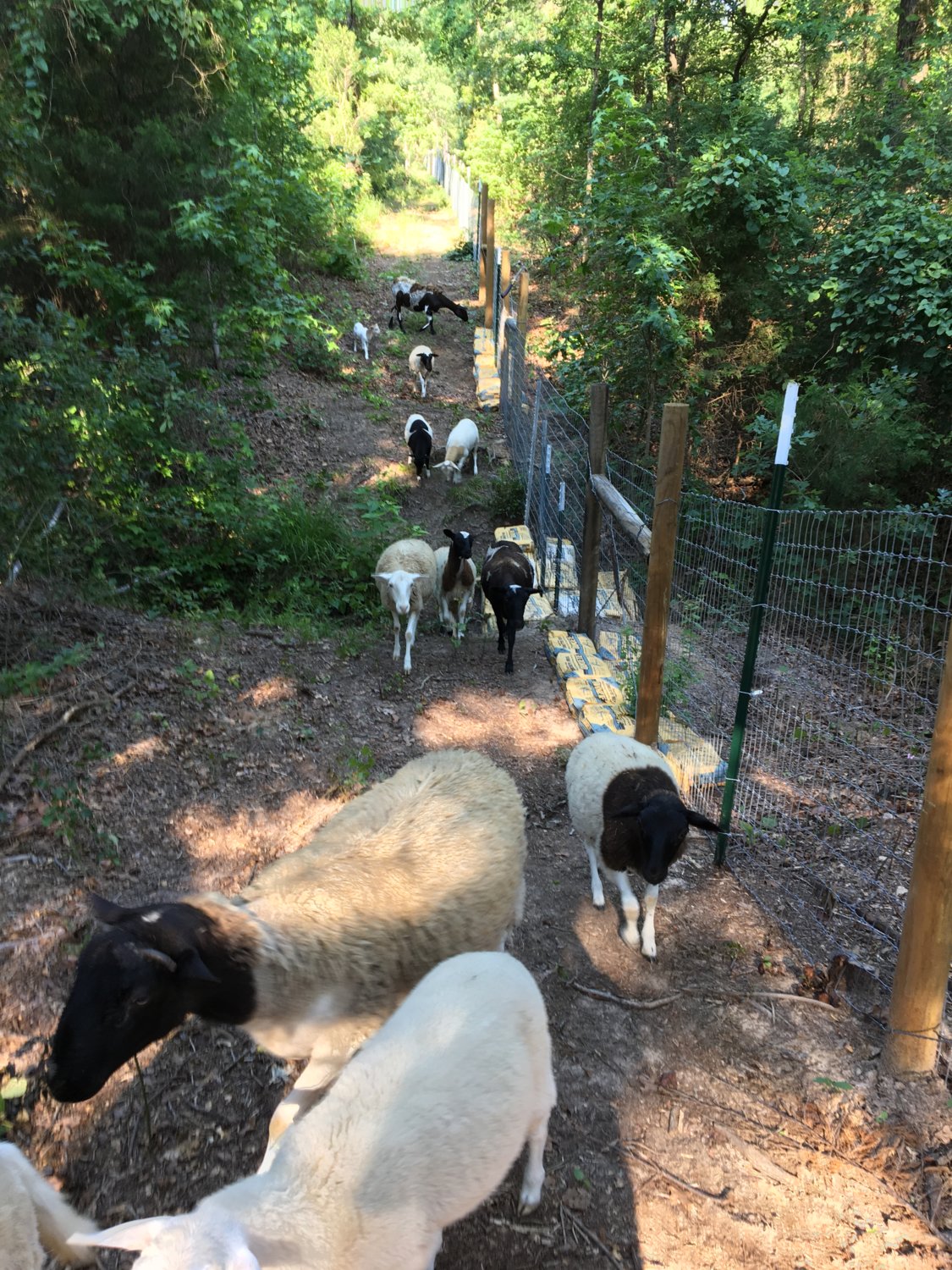 I have 4 ewes now. Had to put one down early this year due to a ruptured prepubic tendon. I have 3 ewe lambs, 2 of which I'll probably keep, one is not growing off and is small, but she'll look good on a plate. My ram is ok, not great, just ok. Taking 3 wethers (sold) to slaughter in a few weeks, going to take the ram too. Am looking at a better ram that I'll probably pick up in October.

I'm still looking for "that" breed of chicken. Going to try Australorps in the spring. The good part about old layer hens is that they are good to eat. We also slaughter surplus cockerels.