An Introduction to Buffaloes

Males of most buffalo breeds are suitable for heavy work, but they are slower than oxen and they tend to heat up more quickly because they have 90% less sweat glands than cattle. On road they are usually worked from evening to morning or under cloudy conditions. They are more suitable than oxens for tilling rice fields as they have strong and thick feet and they don't never get stuck in the mud.
Click to expand...

The only issues I saw with the English are in the quoted part. Ox is 1, Oxen is 2 or more. Also it should be "they don't ever get stuck in the mud" not never.

It looks really good and there is NO way I could write something that well in a language that is not my native one.

Kusanar said:
The only issues I saw with the English are in the quoted part. Ox is 1, Oxen is 2 or more. Also it should be "they don't ever get stuck in the mud" not never.

It looks really good and there is NO way I could write something that well in a language that is not my native one.

Thanks a ton. The never part was clearly a typo.

To my surprise I am feeling wonderful this morning. It is as if I never got sick. It is 5:55 AM

Buffaloes were again domesticated around four thousand years ago in East Asia as a dual purpose livestock with emphasis on working abilities of the animal. They developed into what we call swamp buffaloes. They are more stocky and comparatively smaller than river buffaloes. Their horns are stronger, thicker and longer than that of River Buffaloes and they together from the shape of a bow or Cresent. They are more commonly found in gray, brown, golden and slate colors. They have a distinct white marking under their neck. Albinism is more common in swamp buffaloes. They resemble their wild ancestors more than the river buffaloes. They are genetically distinct from River Buffaloes. Swamp Buffaloes have 48 chromosomes whereas River Buffaloes have 50 chromosomes. Swamp Buffaloes are common in countries like China, Vietnam, Laos, Thailand, Cambodia, Burma, Malaysia, Indonesia and Philippines. 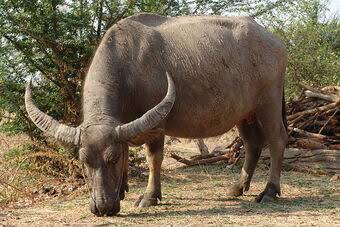 River Buffaloes said:
They are more stocky and comparatively smaller than river buffaloes.
Click to expand...

Keyword there being "comparatively", still looks like a BIG animal!

To my surprise I am feeling wonderful this morning. It is as if I never got sick. It is 5:55 AM
[/QUOTE]

That is great news!

Yes, I told you that Water Buffaloes are the largest members of the tribe bovini, so even the smaller among them is a bit on the larger side.

Do they give much milk?

One health issue that buffaloes are vulnerable to is uterine prolapse. Now prolapse generally occurs during the 3rd stage of parturition or immediately after it in buffaloes, but in rare cases it may be seen 24 h to 48 h after parturition.

Poor myometrial contractions during the post-partum period and traction during difficult births are two postulated etiologies and low serum calcium (hypocalemia) appear to be a significant risk factor for uterine prolapse in buffaloes.

Hypocalemia is said to be the main cause of 'milk fever' in cattle, the same is considered a risk factor in Water Buffaloes. The theory is that thick heavy and strong bones of Buffalo calves and higher calcium concentration in buffalo milk is the main reason behind the hypocalemia in Buffaloes, because it occurs more in mature buffaloes than in heifers. Hypocalemia happens when an animal's metabolism is not able to extract enough calcium from its bones, but continues to provide calcium to the fetus or calf through her milk and resultantly the calcium level in her blood drops.

Baymule said:
Do they give much milk?
Click to expand...

No, buffaloes give little milk when compared to cattle. Most landrace breeds will give 8-12 liters of milk. Good breeds most notably Murrah, Nili Ravi, Jafarabadi, Kundi may give upto 4 gallons of milk. I guess that the record is 28 liters in India and 32 liters in Pakistan.

To put it bluntly buffaloes are not milk giving machines like cows. Infact if they don't want, they will outright refuse to get milked, they will refuse to let the calf nurse. Their other side is that you can take all your time to milk, even if it takes you half an hour she will not budge.

Once I was milking one of my buffaloes and a little boy was playing nearby and he was attempting to climb a chair and he just fell off with the chair. I left the bucket under the buffalo and calmed him down and after fifteen minutes or so I remembered that I still have to complete the milking so I went back and found that she was still standing, waiting for me with the bucket placed under her.


I think there are three reasons behind low milk production in Buffaloes when compared to cattle.

First of all first buffaloes were domesticated some three thousand years after the first cattle, so they have not been selected long enough. Goats were the first dairy animal to be domesticated and they give more milk by body weight than most cow breeds.

Third reason I think is that they were never selected for intensive production. They are kept as a backyard livestock. They were not selected for dairy industry. They cannot be used in dairy industry, you cannot steal a buffalo's calf and expect her to line up to get milked, not going to happen.

Here are two of my buffaloes who are going to calve in a few months. They are in my courtyard for some goodies. These two are not very welcoming buffaloes, so we keep them inside, when they are home. Their love is reserved only for the family.

These pics are a few months old.

This is our heifer, she will be three in November. I hope she fatten up fast. 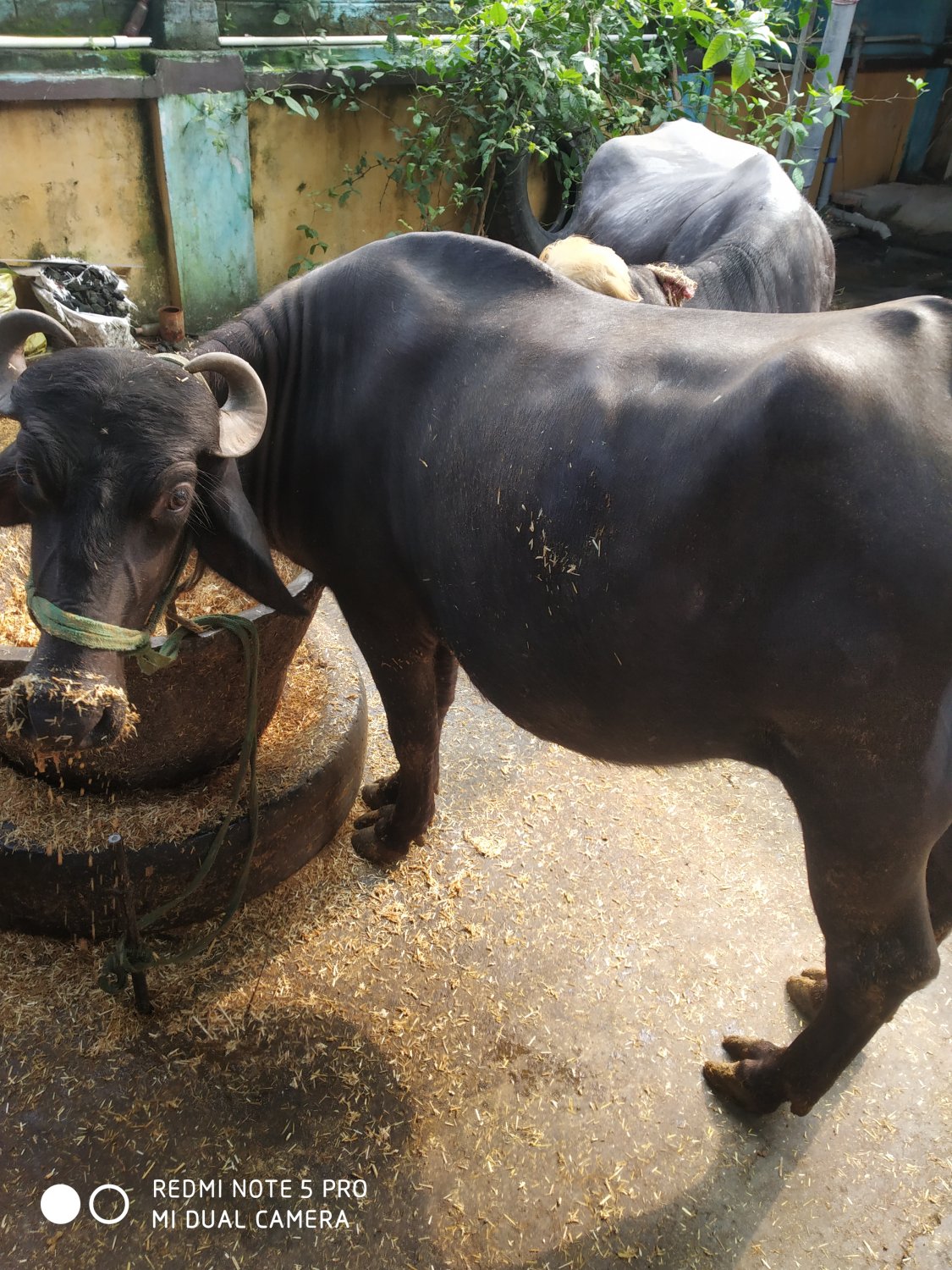 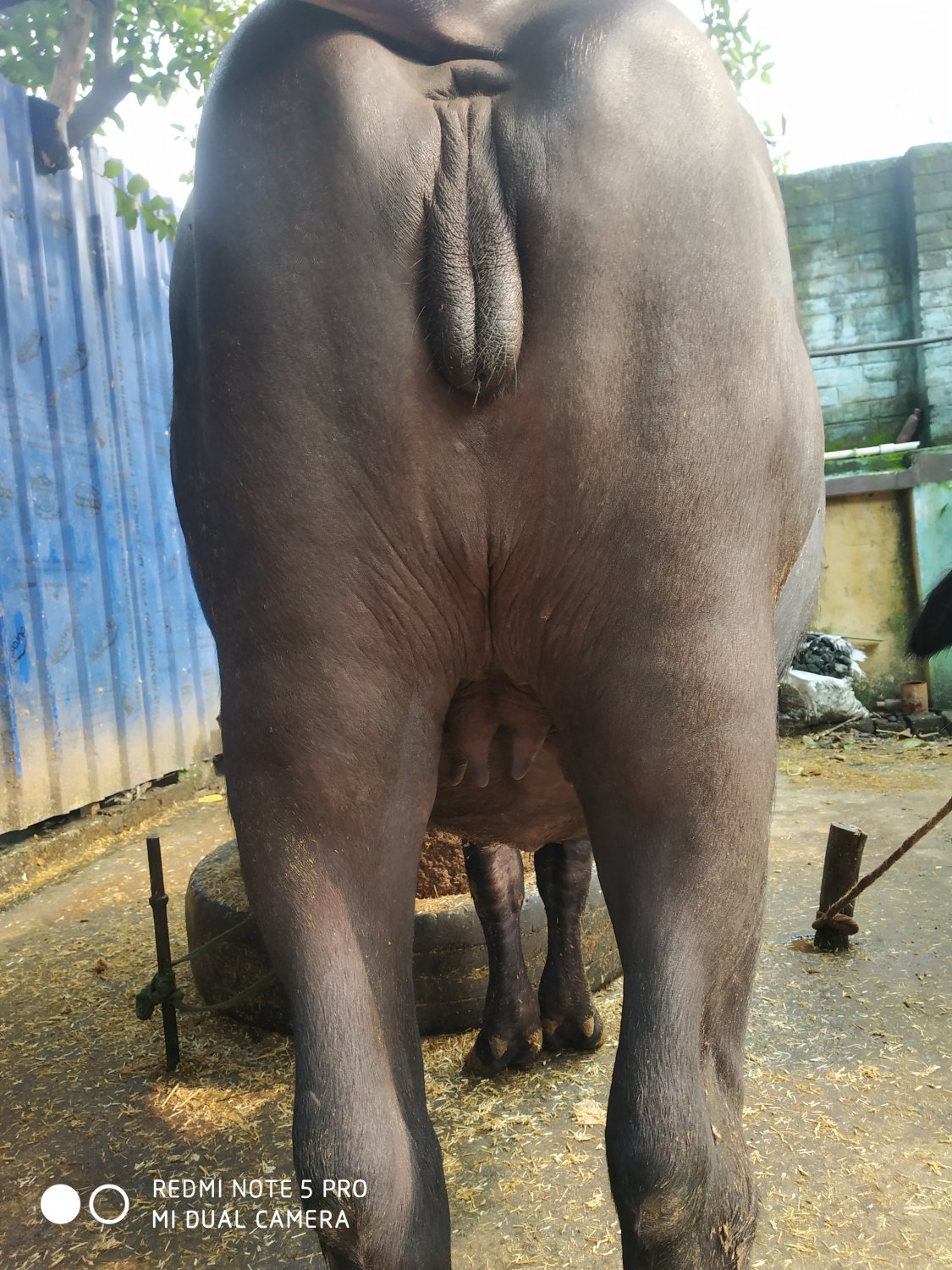 This our beloved Kabootar, she was small when we got her. She had a very unhappy childhood. She got burnt in a terrible fire, she broke tip of her horns after fighting with someone else's buffalo and then her tail got gangrene when she was just bred for the first time. She is due sometime in middle to late October. She is not going to be sold, she is a pet. 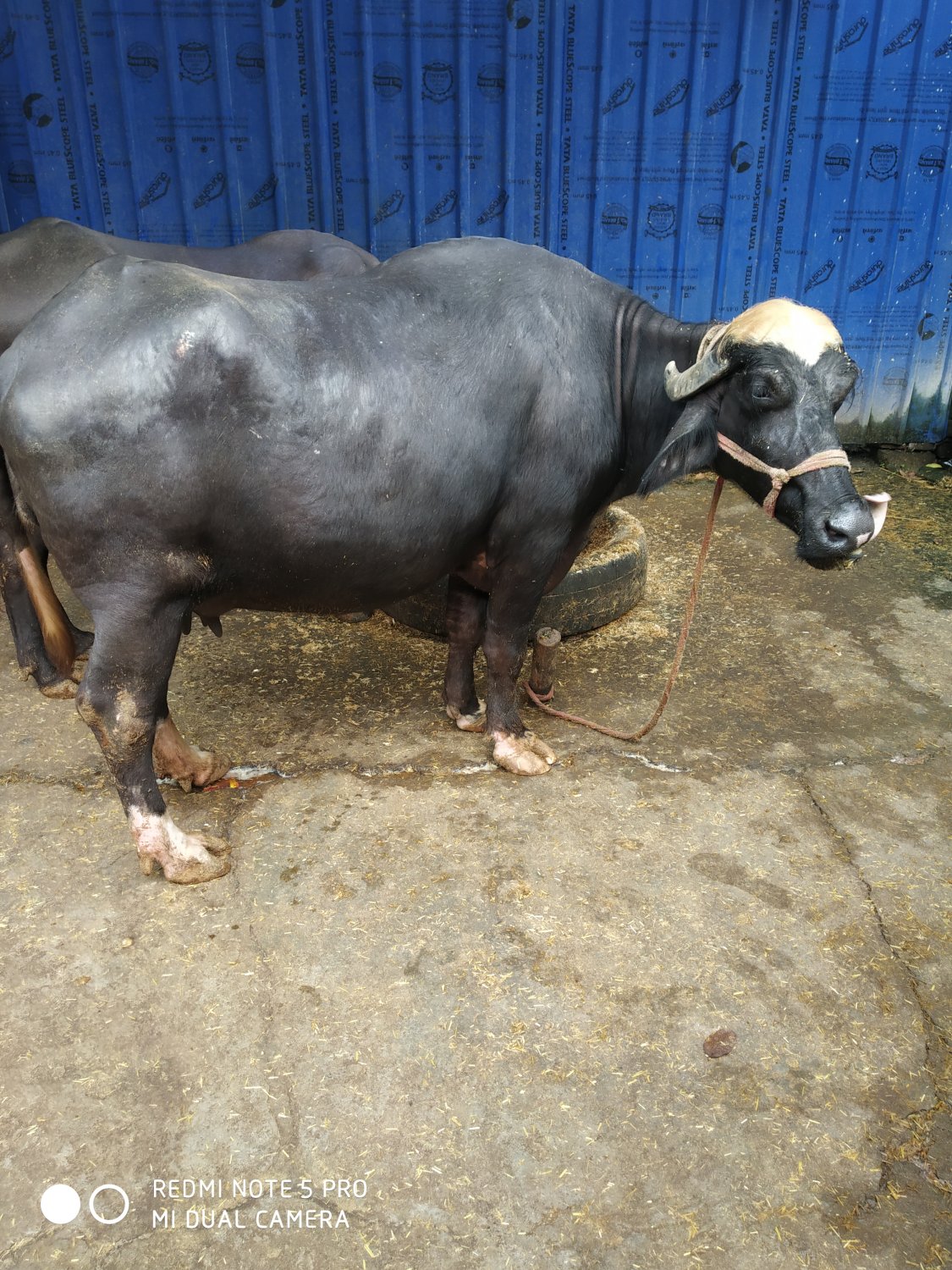 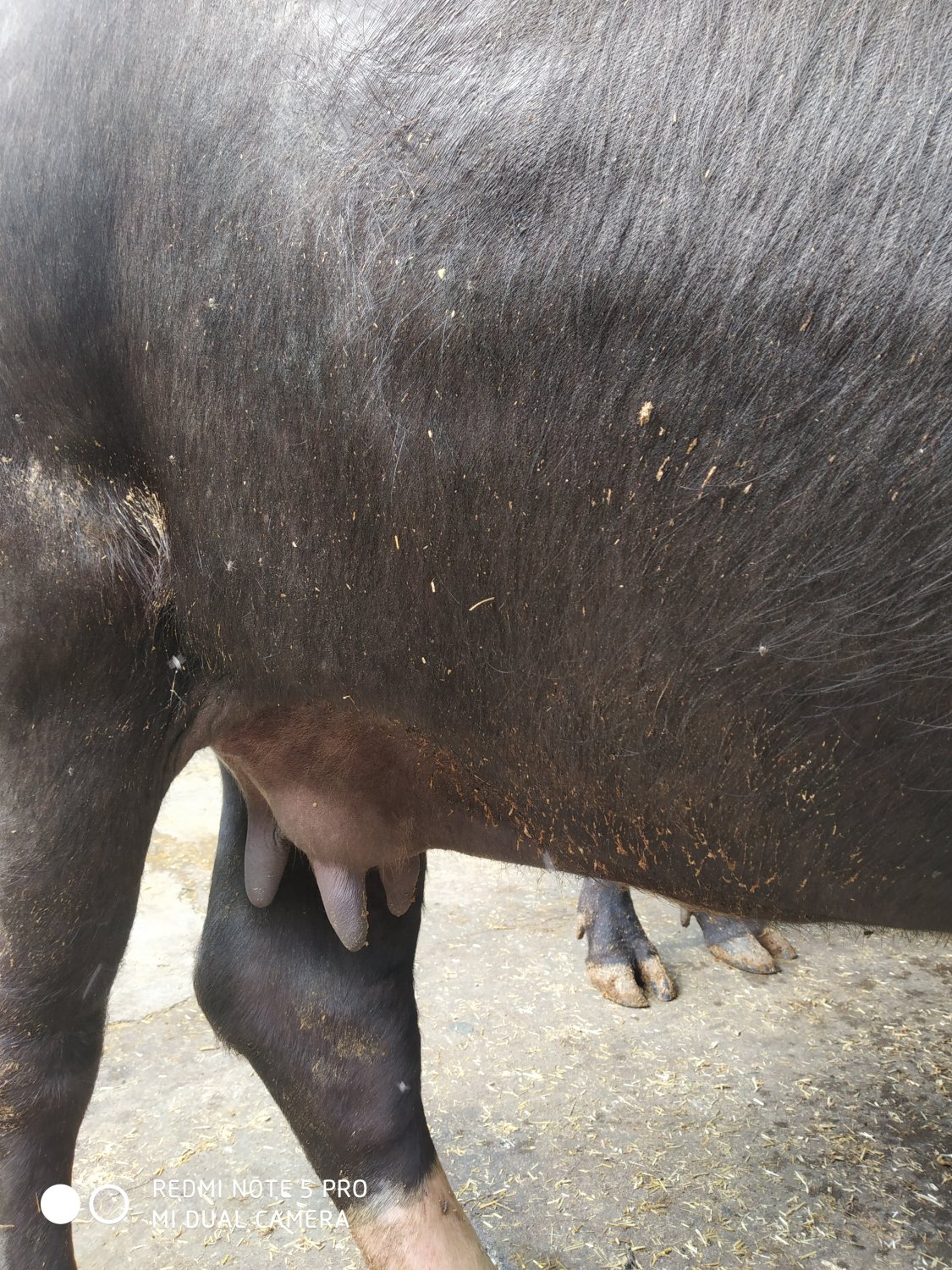 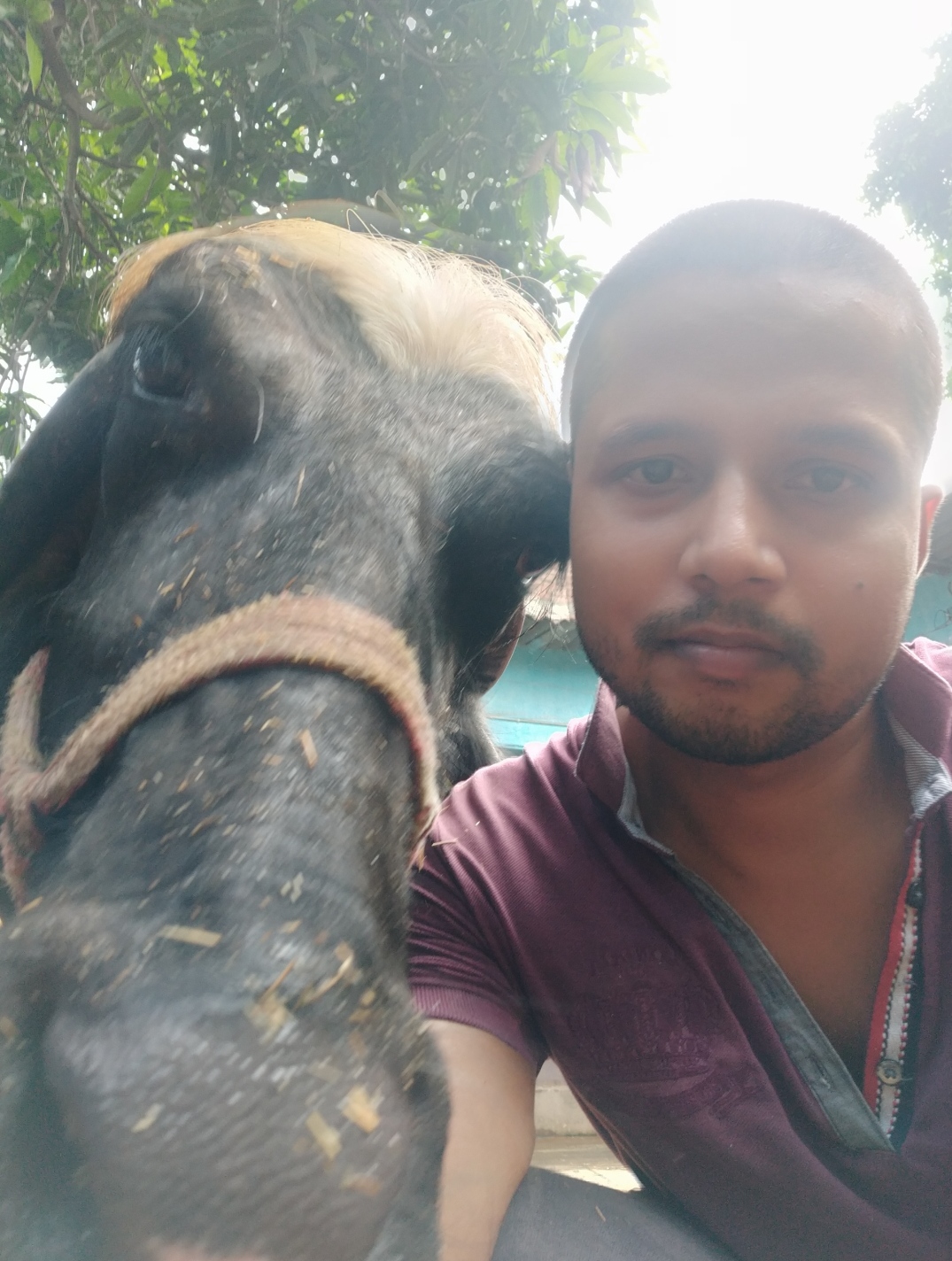