So it seems I was overfeeding pellets big time. The doe seemed to enjoy it though! So I've cut a scoop out of a plastic bottle to the right size so that I know how many pellets to give.

I am worried about the buck not eating much nor drinking. He's only nibbled at his pellets and he does not want to eat the nice hay I've bought. I've occasionally been feeding him bits of grass and he had some carrot bits last night so I know that he can physically eat. I just hope I haven't turned him into a picky eater.

Would he starve himself if I stopped giving him grass and bits of carrot? I'd like him to eat hay but I don't want him going on hunger strike. Then again if I had to choose between eating hay and eating nice bits of carrot I think I'd agree with him. If I take away the option of just eating treats, would he stop eating entirely?

I've also moved him up away from the floor. He can now see the doe through some wire and he's away from any night-time visitors that might be putting him off his food.

I might be over thinking things and moving things around too much but my instinct says that an animal that is off it's food has something that's bothering it.

Part of me thinks I need to breed him quickly before his picky eating affects his condition and that he won't be able to if I hold off for a couple of weeks.

The greedy doe and the picky buck: 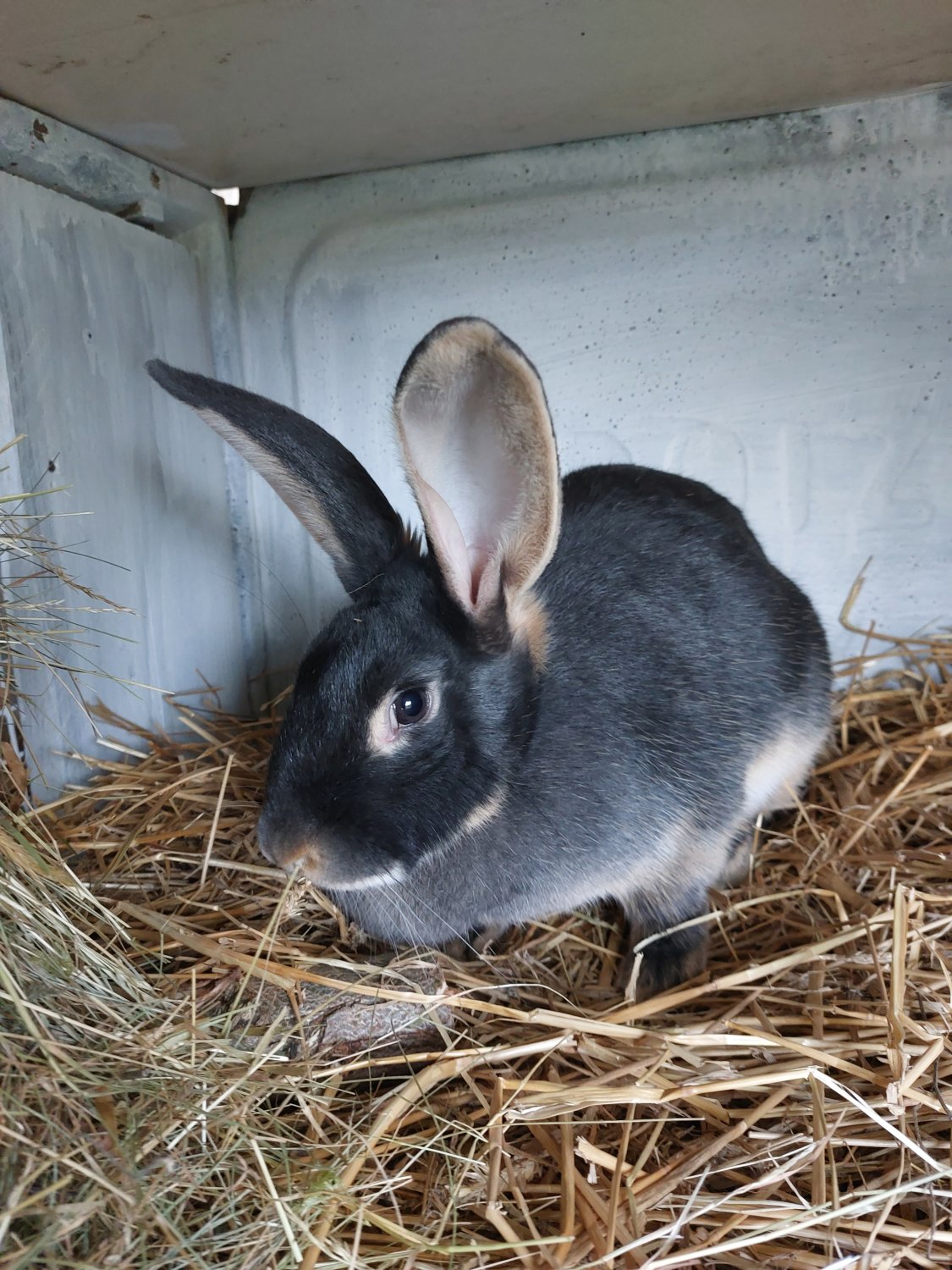 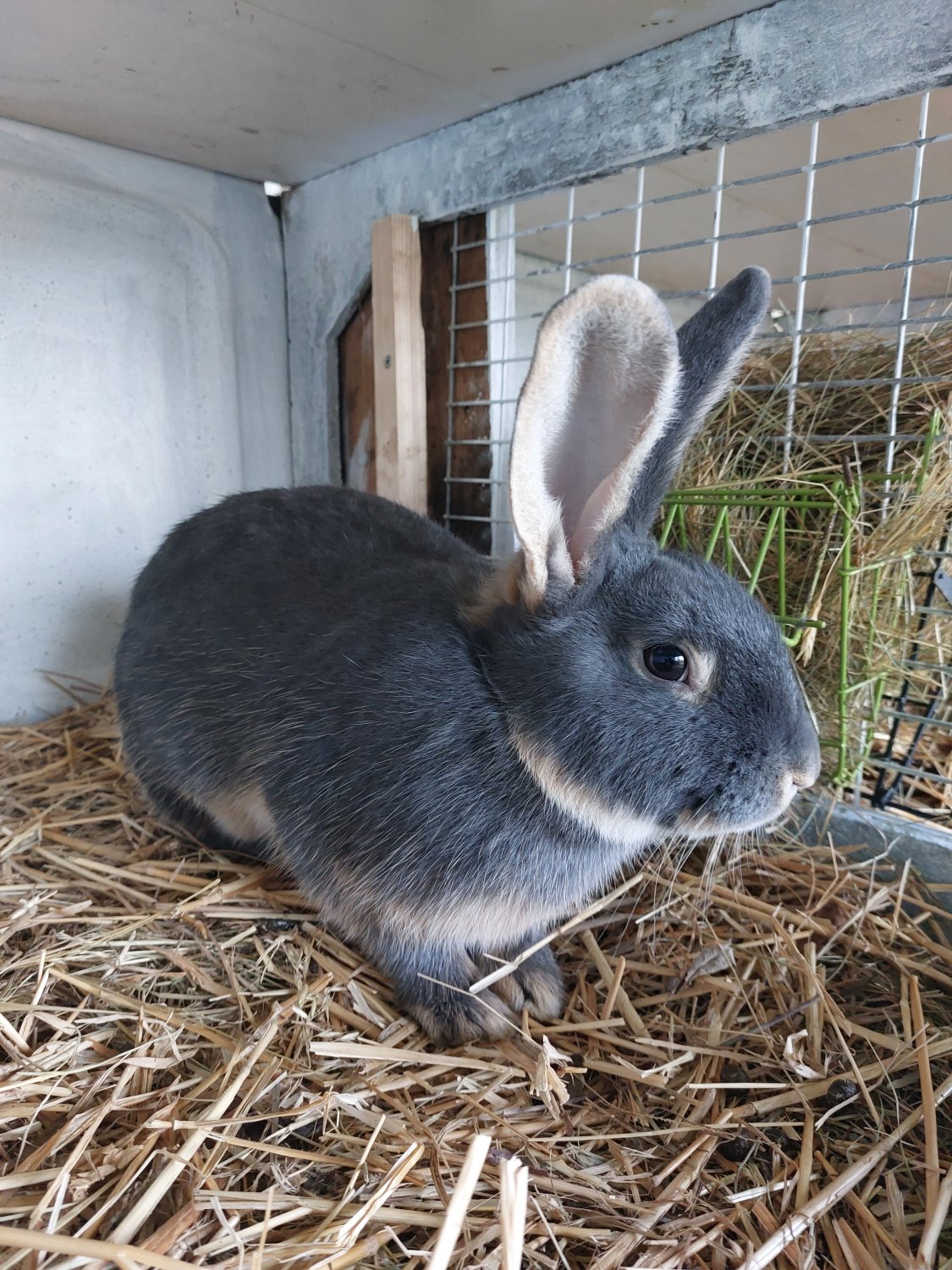 Thanks for the feeding advice. When I was first looking into raising rabbits, I had the idea of feeding them as cheaply as possible. I have access to as much grass as any rabbit could want. So I thought about picking an armful of grass and weeds every evening and the rabbits would grow nicely on that. But almost everywhere online and the Storey's guide said that this was a crazy idea and that pelleted feed and hay was the right way to go.

Now I have a buck that wants to eat grass and not pellets which is exactly what I wanted but now it's supposed to be a problem. Talk about a learning curve!

They do have names, given to them by the breeder's daughter. They are called 'Currant' and 'Little Wolf'.

After getting to know the rabbits for a bit, everyone has seemed to settle down. The buck isn't as picky as he once was and now eats his hay and pellets nicely. He is a lot less jittery and although I can't say he enjoys being stroked, he is a lot more tolerant of being touched.

The doe on the other hand seems to growl a lot. I've tried putting the pair together to breed and although the buck tries to do his part, I haven't seen a 'fall off'. I have seen a wet back leg on the doe though so he is trying. The doe alternates between flopping down on her side while the male tries to find the right end and actively trying to bite off his family jewels. I tried for two consecutive days, putting them together in the morning and the evening and the doe is so adamant that nothing will happen that I separate them before she can do any permanent damage to his manliness...

This is all very much a learning process for me. I started to think that the doe could already be pregnant as I have had the rabbits for less than a month. I even managed to convince myself that she was nest building when it was probably more her just pushing straw around and making little tunnels in her bedding.

I've been trying to look for a dark pink coloring and but have only seen pale pink during a somewhat awkward inspection.
She's not in the mood and the more I try the more she seems to dislike me. She growls and pounces towards me.

The plan is now to wait and see if any kits are born before the end of the month then I'll know for sure if we're clear to have another breeding attempt.

Does often have bad attitudes. Are you taking her to the buck’s cage?

If you put the buck on her cage, she is territorial and will put up a fight. Doe to bucks cage and she may cooperate. Maybe.

Thanks for the advice. I've been taking her to the buck's cage. She might just have a bad attitude.

I'm not giving up on her yet but her attitude is making her eventual trip to freezer camp a lot easier for me to prepare for mentally.

Chevre said:
Thanks for the advice. I've been taking her to the buck's cage. She might just have a bad attitude.

I'm not giving up on her yet but her attitude is making her eventual trip to freezer camp a lot easier for me to prepare for mentally.
Click to expand...