G'day Bee,just out of interest how deep is the litter layer?If you scoop out a hole in the middle does it feel "hotter' as the decomposition of material starts to take place?This is great information you are providing and should encourage others to try this type of system out...T.O.R.

The Old Ram-Australia said:
G'day Bee,just out of interest how deep is the litter layer?If you scoop out a hole in the middle does it feel "hotter' as the decomposition of material starts to take place?This is great information you are providing and should encourage others to try this type of system out...T.O.R.
Click to expand...

Not deep enough for that yet, but it should get that way when it reaches a foot or more deep. In the coop I can get temps up to 98-100 at those depths on days that are in the teens and 20s. If I build steadily, I may be able to reach that depth in their most frequent lounging area by the time it gets cold enough to need that extra heat.

Right now I'm around 8 in. deep in some areas and only 4 in. in others. It's a pretty large area to build up, so it creates a challenge.

Added several more bags of leaves to the sheep pens today, both wet and dry leaves. Mostly placing the dry where the bedding would tend to get more wet from urine, under shelter, and the wet anywhere out in the open areas where there is the most foot travel.

It has rained here for two solid days and nights and the DL seems to be absorbing that well, considering it's all on a slope there and the water tends to run towards the building. It used to wash whatever ground cover that was there further down the slope, but now it just seems to either be absorbed into the mass or runs beneath it, as it's not moving any litter, though the rains were very hard.

There's only one muddy looking place leading into the most used feeding area right now but even then it has a good base of cypress mulch in that area to keep it firm....that's where all the water wants to run to on that slope, so it's no surprise that's the muddiest area.

In the hoop shelter where they had already consumed a 5x5 round bale...I didn't mind letting them waste a bit of hay in that area to establish a base for lounging. Added dry leaves there today, with the added benefit of giving them some additional variety to their diet. 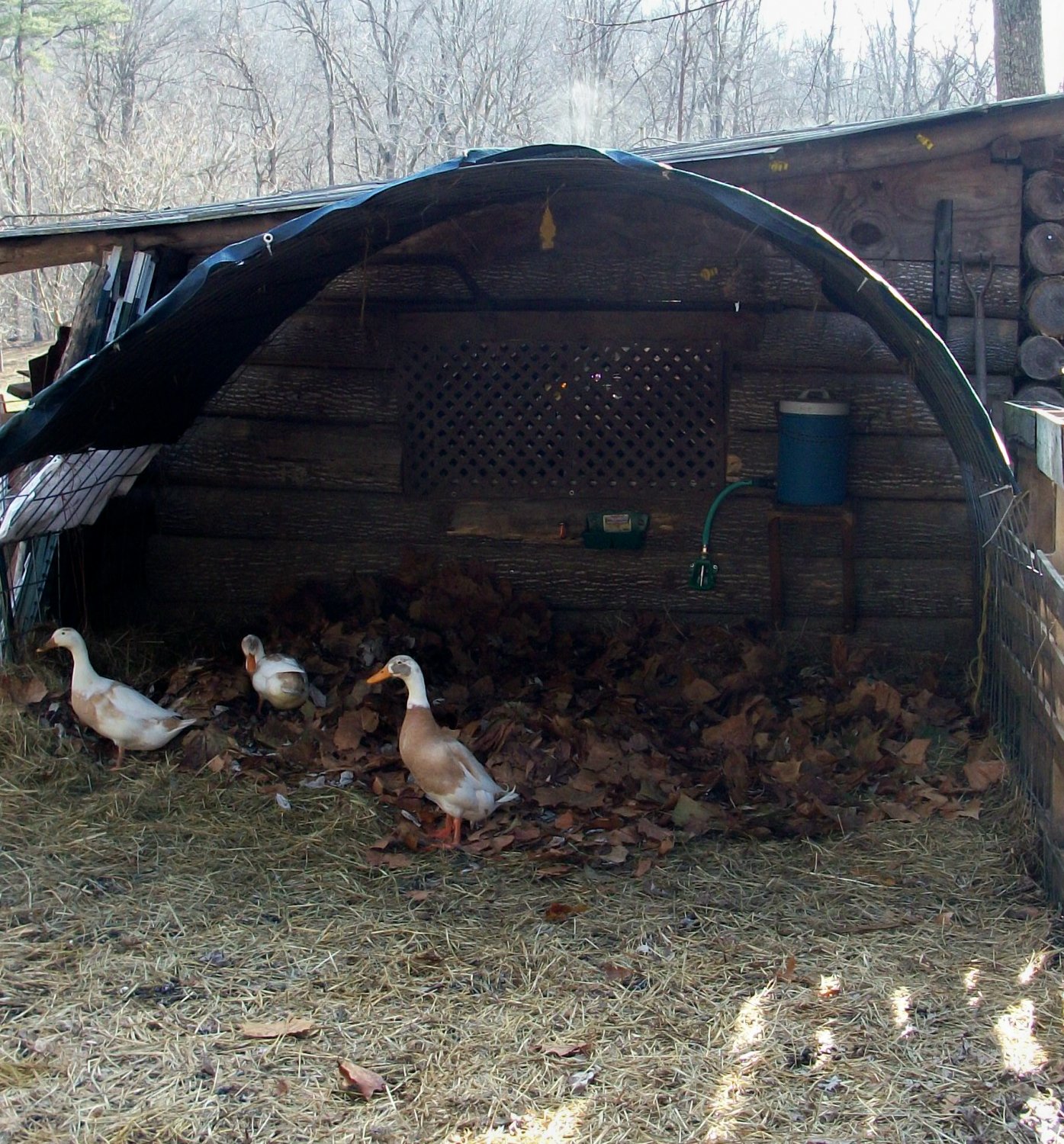 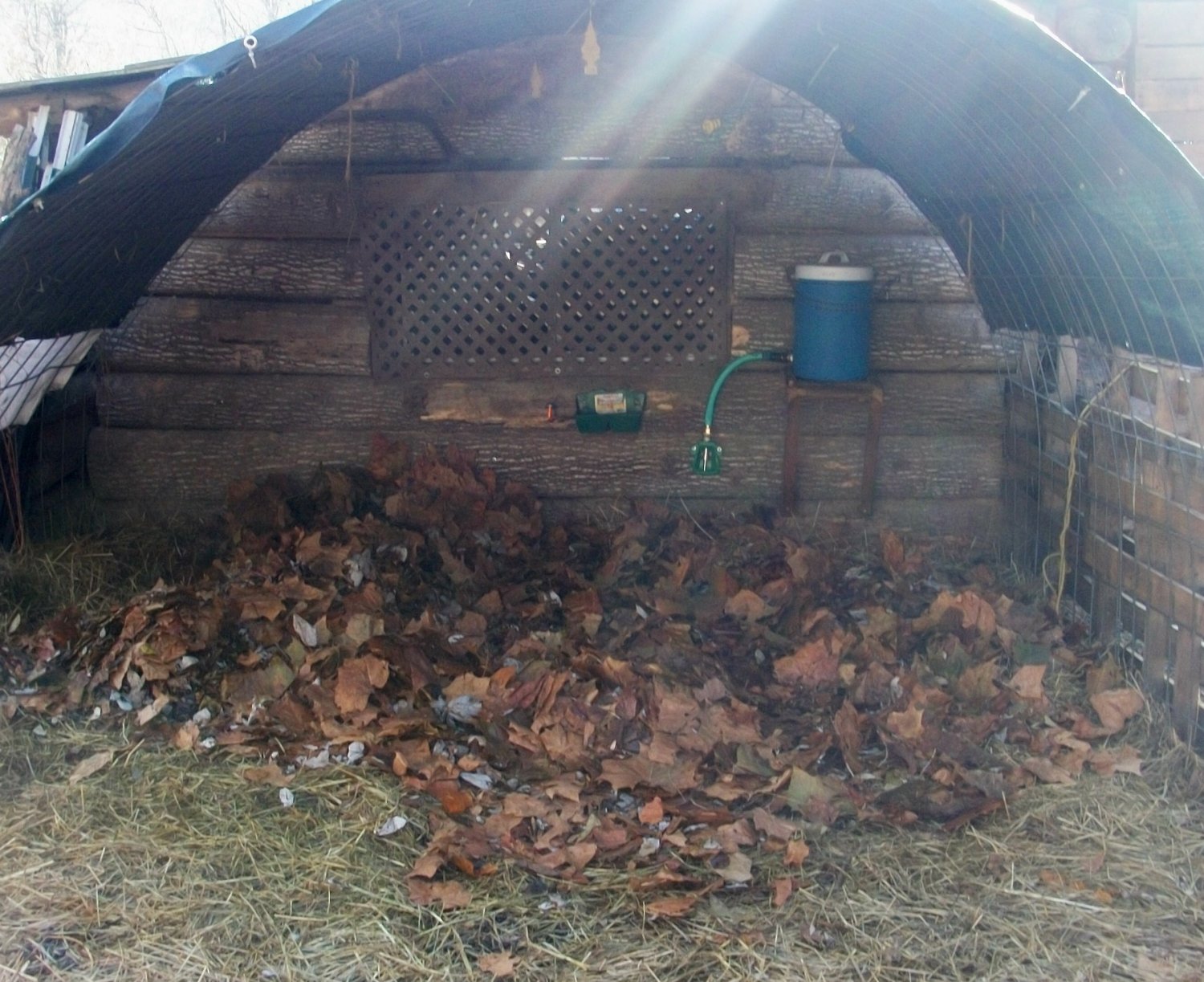 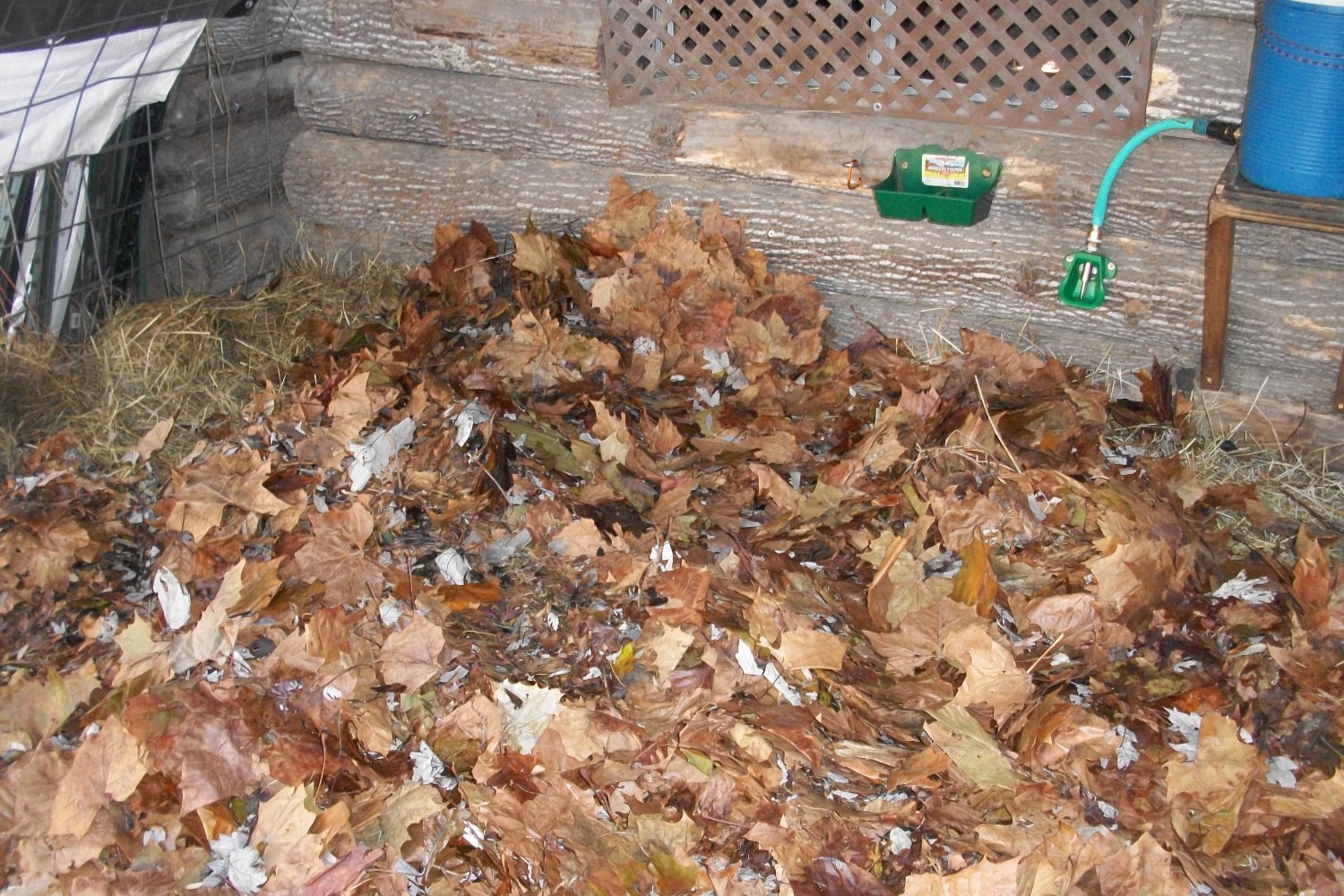 In the other side of the run with the most foot traffic....the leaves are dry on top, though we've had all that rain, so it makes for a springy but still solid footing for the sheep, who have been confined to these pens for the past 3 wks or so. 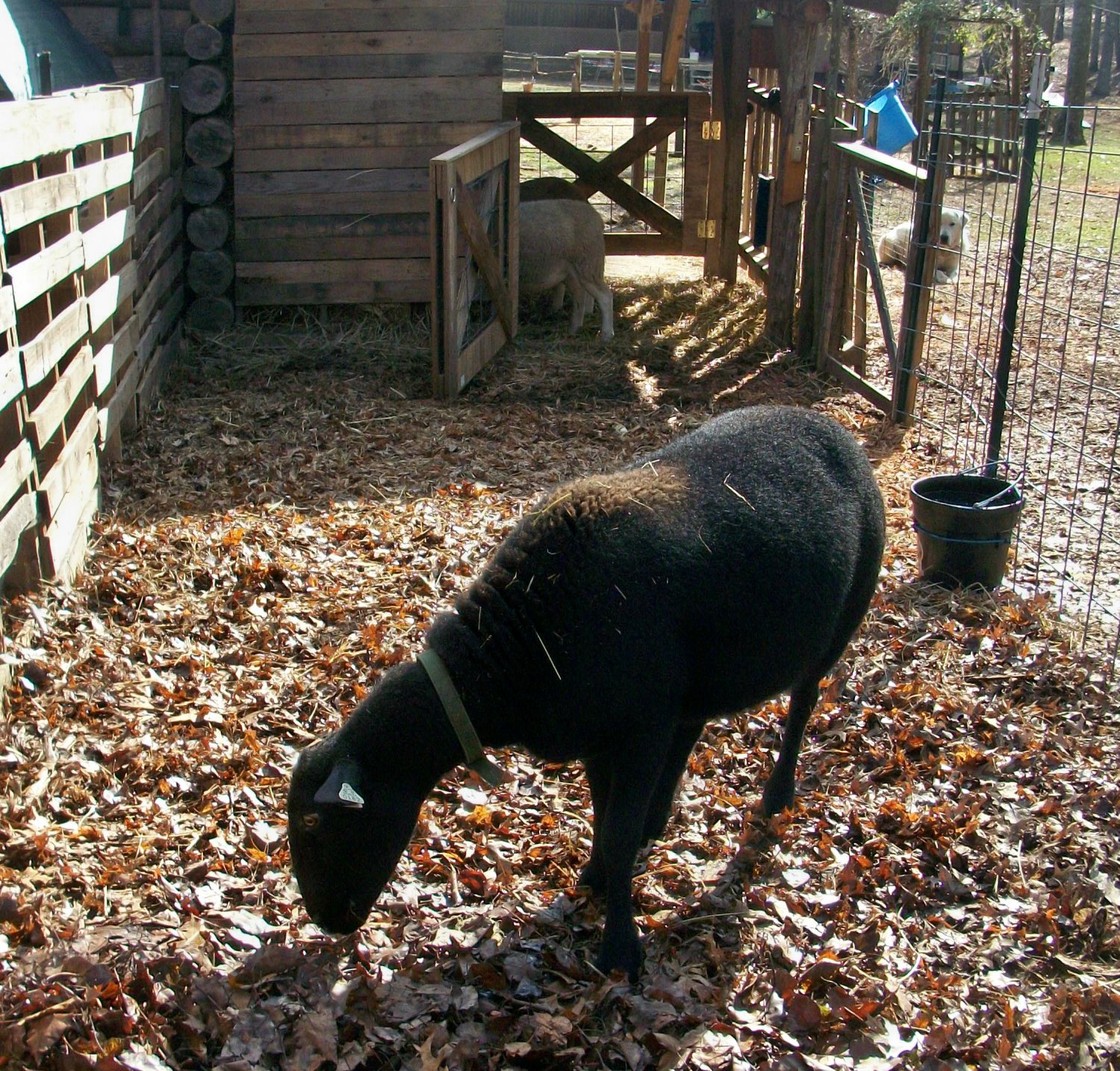 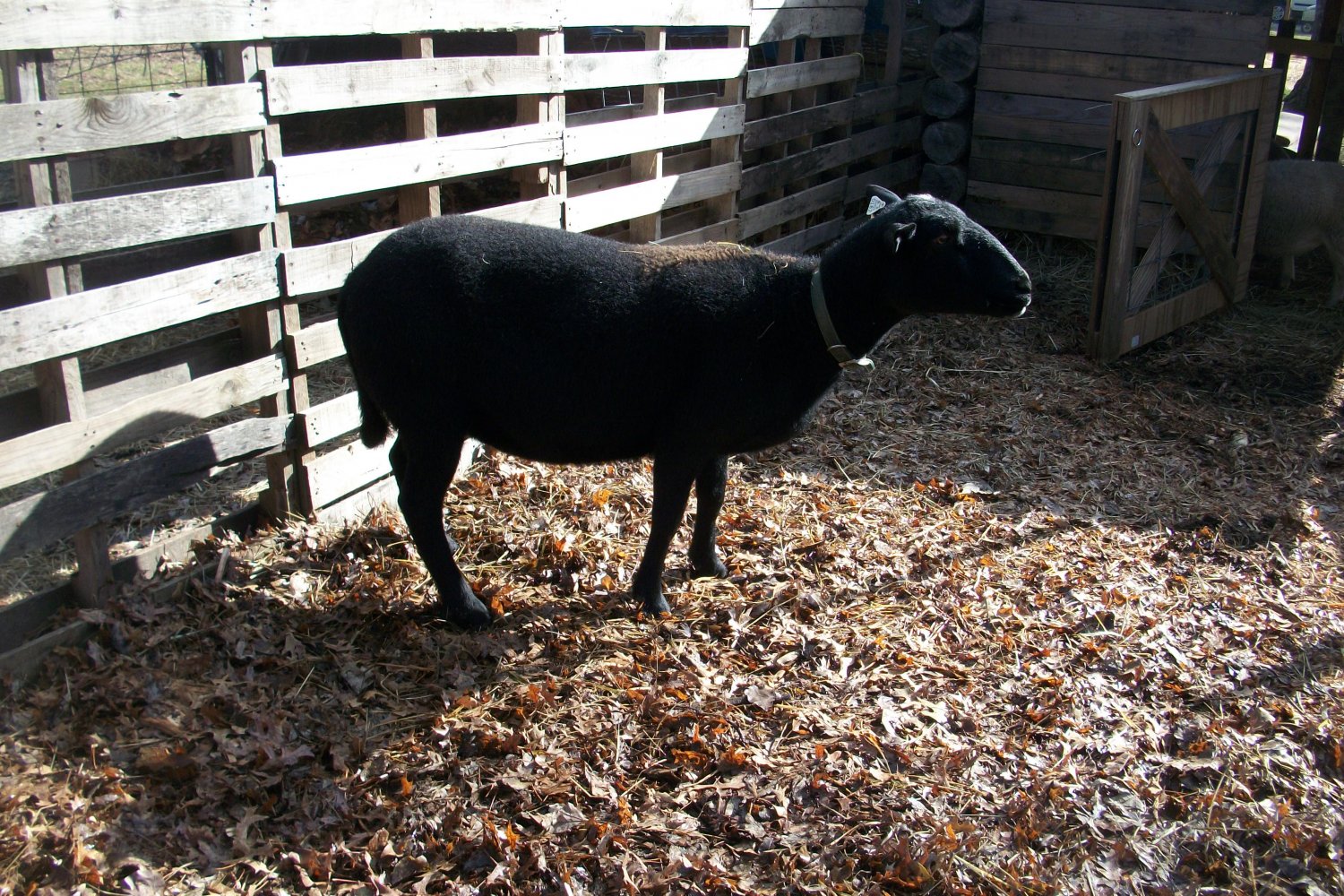 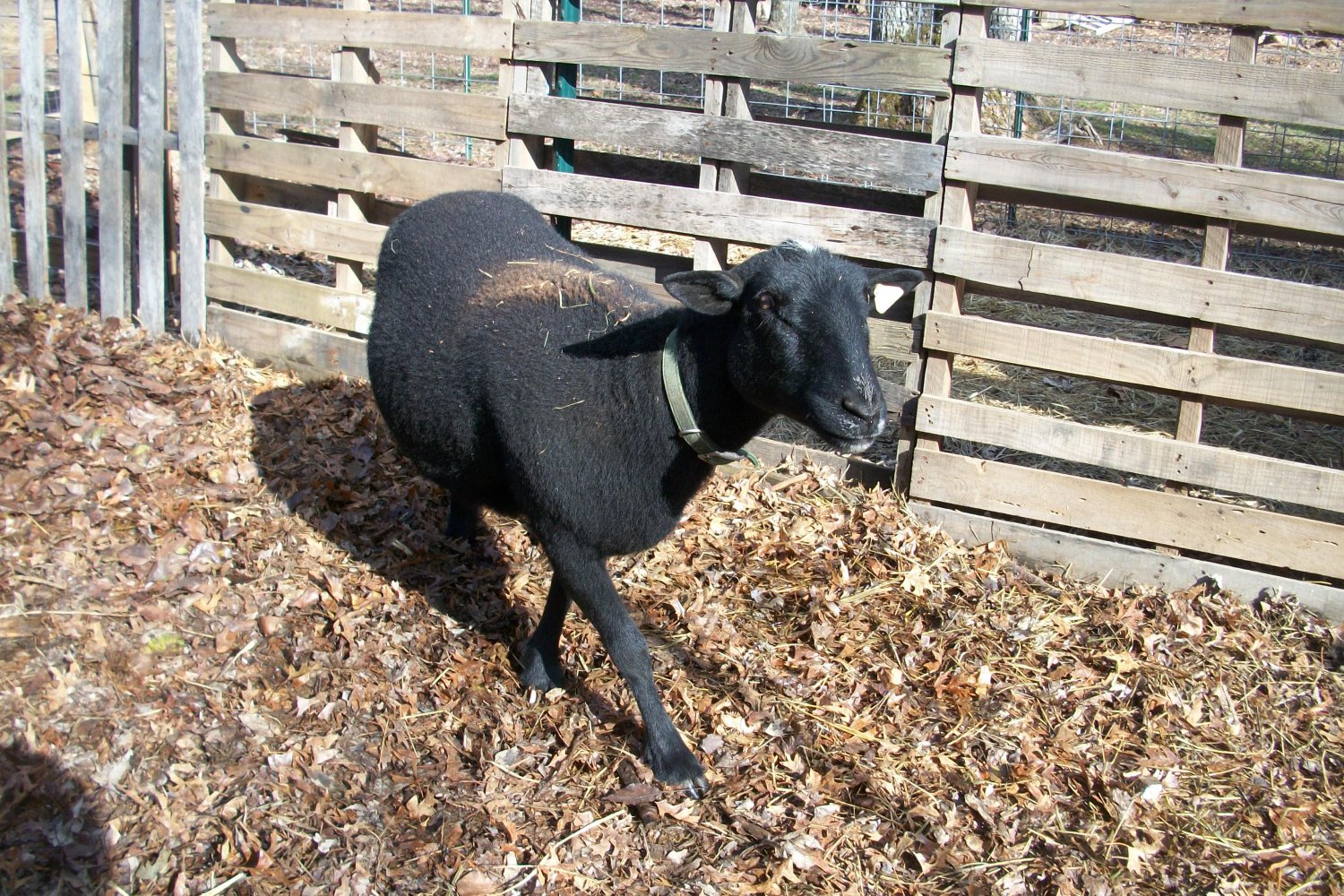 The other side of the pen has more depth to it, as it was the place I added the most material earlier on, so it's even more dry on the surface. Now I'm starting to concentrate on getting some depth in this side...right now it's no more than around 3 in. at best.

All in all I'm pretty pleased with how well it's keeping down the mud and smells of urine and feces...can't really smell those at all. Don't know how well it would perform for the same in hotter weather, but hopefully I'll not need to find out. It will take a few years of building a good base there for it to do well in all seasons, I figure.

G'day Bee, can we see some more "detail" of the log barn?Using old pallets as dividers is another great use of a "waste" material....T.O.R.

The Old Ram-Australia said:
G'day Bee, can we see some more "detail" of the log barn?Using old pallets as dividers is another great use of a "waste" material....T.O.R.
Click to expand...

TOR, that's just an old storage shed my Dad threw up around 20-25 yrs ago, but we don't use it as a barn. I do use part of the front porch of it for one of the feeding stations/pens but that's all just temporary. We'll be building a barn/multipurpose shed down towards the front of the place this year for the pens and sorting pens.

Until then, the pallets and CP came in handy to erect a temporary holding pen and shelter for the flock until I can get everything the way I want it here.

Will be using some supersized pallets(10 ftx 4-5 ft) to help in building the permanent pens and barn....got those for free also. I like recycling free materials whenever I can.

Hay feeder in the porch of the log shed... 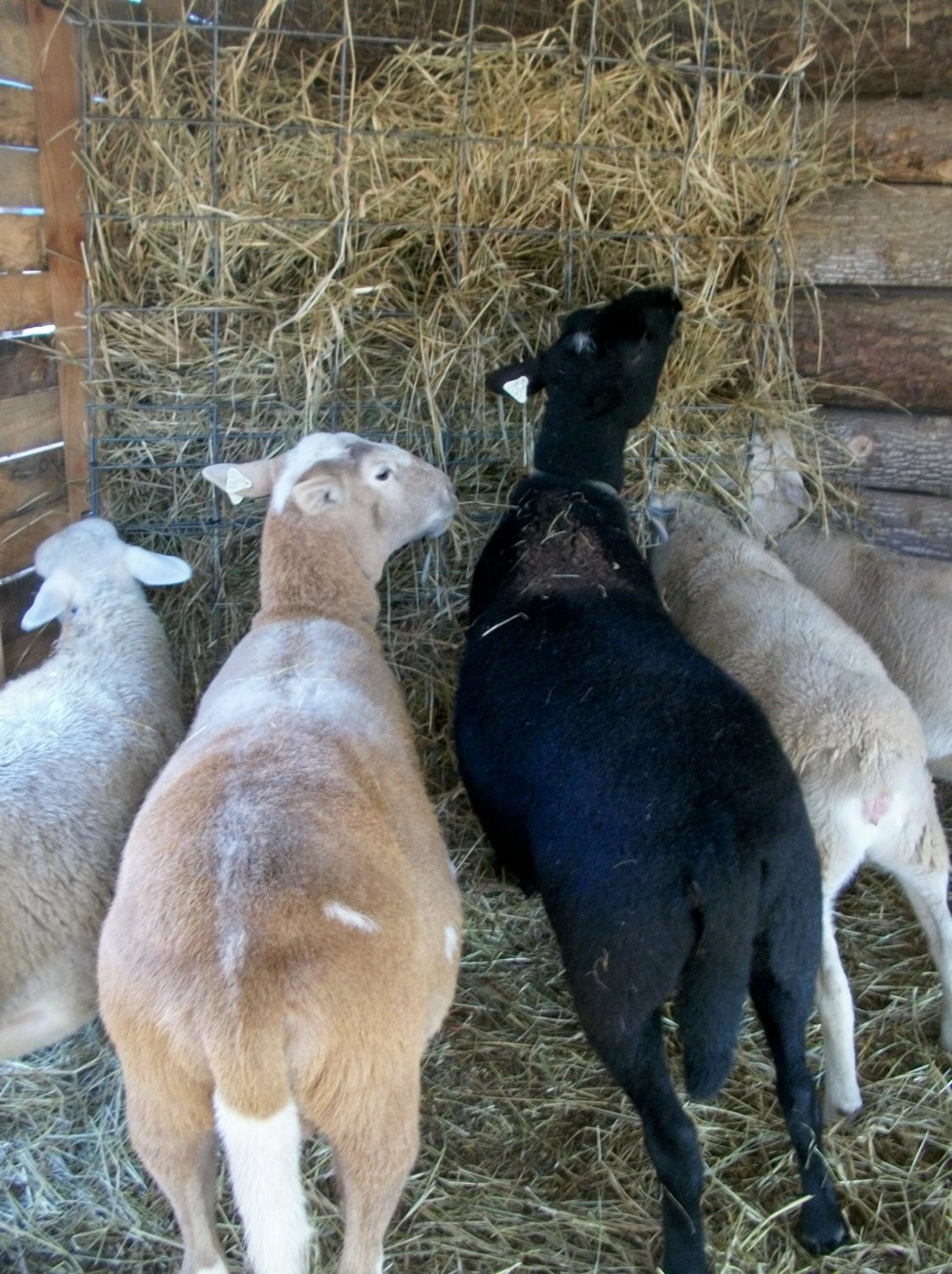 This whole pen was from free and recycled wood, even the gates. It ain't pretty but it gets me there until I can build the other barn/shed and then put this one back into a multipurpose pen....used to be an extra broody pen for the chooks. 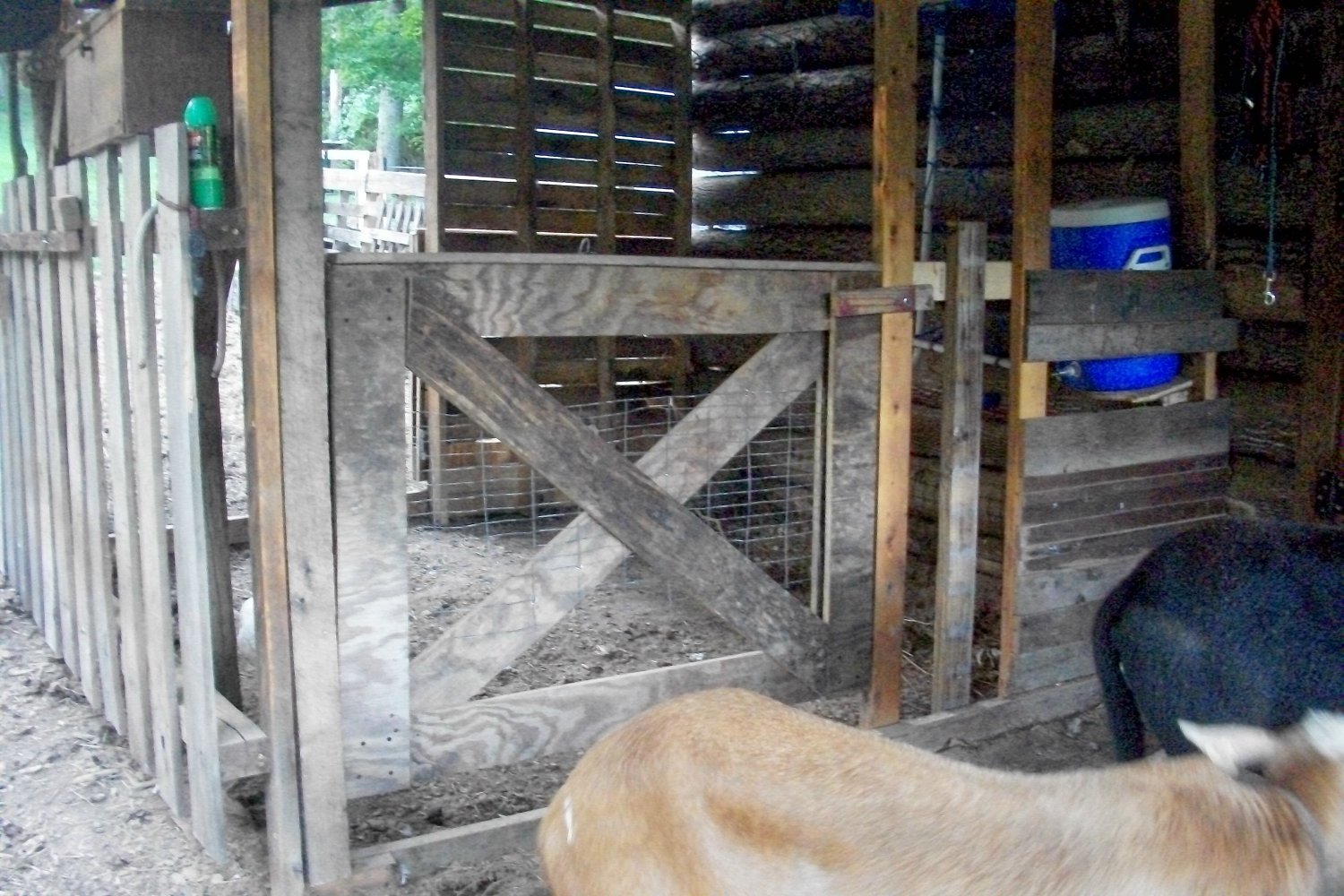 THANK YOU for the DL info. All my oaks finally shed their leaves, and the wind blew piles up against my fencing. I’ve been wheelbarrowing them into my goat “barn”, and I’ve had zero smell issues ever since!! I mix in the dropped hay as well as some sticks, etc to keep the texture varied as you suggested. I’m so pleased. Thanks for this fabulous thread!

Coolbreeze89 said:
THANK YOU for the DL info. All my oaks finally shed their leaves, and the wind blew piles up against my fencing. I’ve been wheelbarrowing them into my goat “barn”, and I’ve had zero smell issues ever since!! I mix in the dropped hay as well as some sticks, etc to keep the texture varied as you suggested. I’m so pleased. Thanks for this fabulous thread!
Click to expand...

I'm so glad it's working out well for you! I've found that varied materials work so much better than just one....it keeps it from matting down into a big, sodden mat of urine soaked mess. Right now I'm seeing the sheep pellets sort of disappearing into the leaves, which is kind of cool. The bugs and worms will find them under that good ground cover and utilize them more quickly now.

The chickens love to scratch in all of that, so that too helps the poop disappear and scratches dry material over the wet spots. They help tremendously to keep it all balanced.

Finally found someone who had been doing this with goats and the heat readings on that litter pack were amazing!!! That's in temps -7* F ambient temps!

I am eyeing all the oak leaves on our ground. I am waiting on Monday, DH goes back to the doctor, after have cataract surgery on both eyes. He'll get turned loose on Monday, then we have a list of chores to do. On the list is dig the sheep compost out of the barn, spread on the garden, then fill the barn with leaves. I deep littered for years in the chicken coops. It is a great way to keep the barn "clean" instead of raking and cleaning constantly. It is also a great way to make garden gold.

The DL is working great....2 wks of solid rain, day and night, really put it to the test and it held steady. Spongy, absorbent and no strong smells at all. We'll see if it will hold out for the winter with the same results, as I add layers of material along the way.

The chickens are keeping the manure pellets worked into the DL, which is pretty nice. The pic below is in the highest traffic area, where they get water and move from one feeding/mineral station to the other. 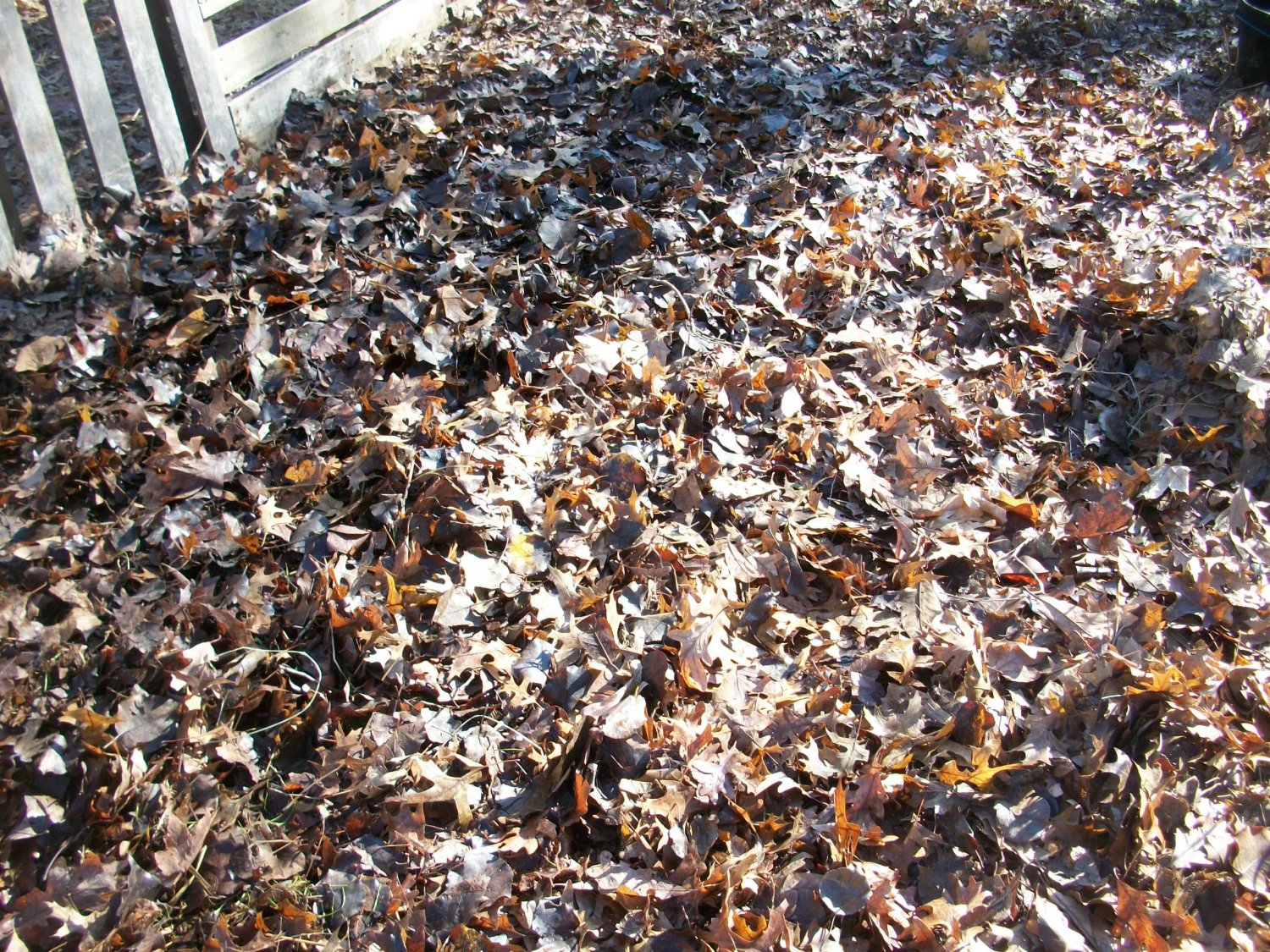 On our coldest day I sat down right next to this hay bale, to see if the DL there was damp, to see if I could smell any ammonia smells down there, etc. Dry as can be, very cushy and soft, not a pellet to be seen or urine smell to be sniffed. This area is downhill from the rain runoff, so I expected there to be WAY more moisture there, but there wasn't. I guess the DL had absorbed it before it got that far, but this little shelter is warm, dry and sweet smelling. The DL there is over a foot deep, so any moisture is way down there and capped off with the leaves and wasted hay. 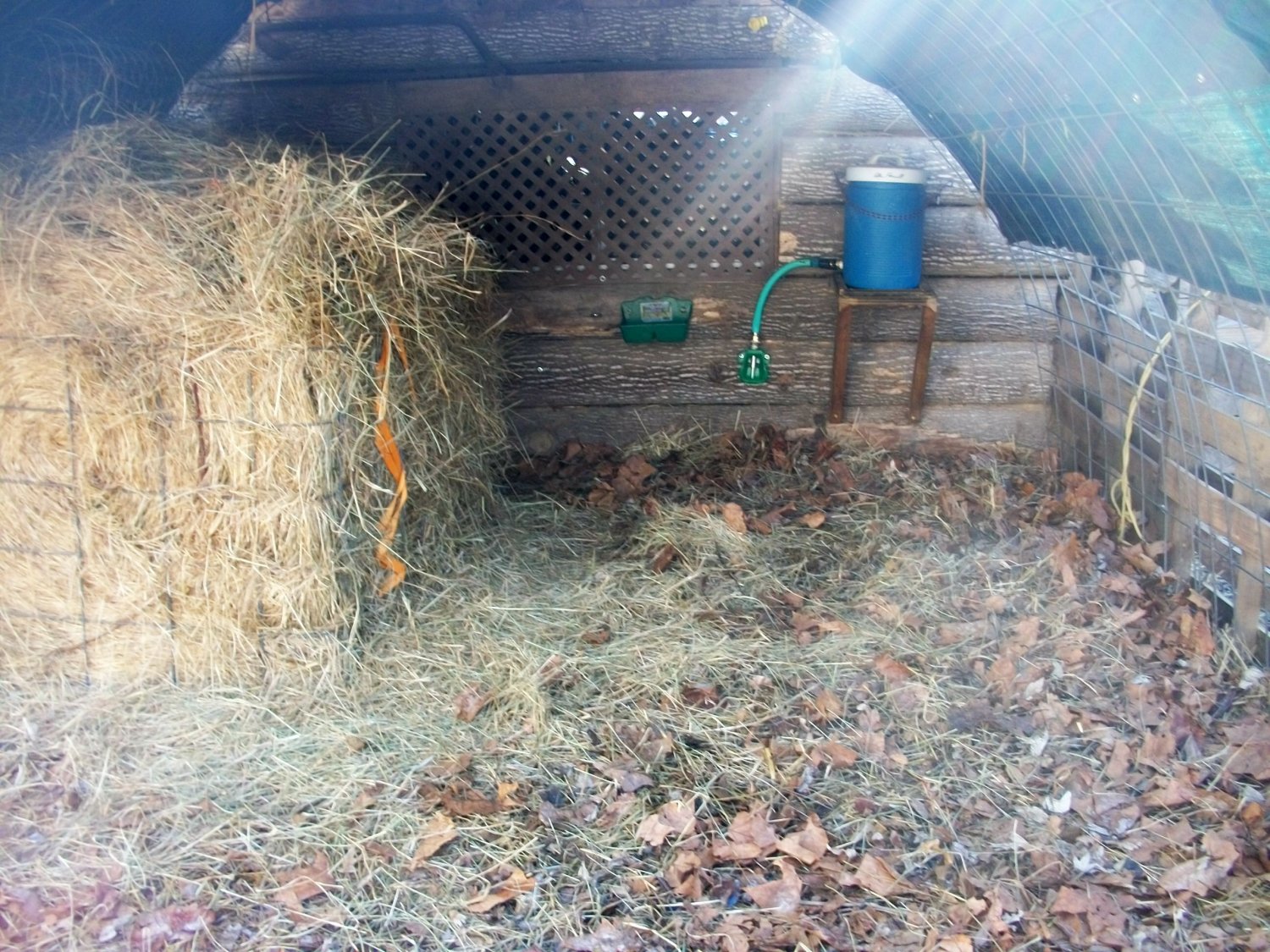