Jesusfreak101 said:
i first thouhght you were talking about goat kids it took a minute to realize it was your babies.
Click to expand...

Me too! Thought they were talking "goat kids". For aggression towards human children, I offer no slack for any dog. Any animal that doesn't recognize the dominion of man over animal is promptly dispatched. No passing GO and no collecting $200. I have NO problem shooting a dog, have done so before and will do so again. If done properly it's just as humane as lethal injection.

He goes after both. With the human kids I am not sure if it is prey drive and it is less intense, but it is a lot like what he started off doing to the goats, so I am not sure. I feel like play and prey drive can start off the same. The children get scratches and have gotten bitten if they go out of my reach and I have to admit, I have NOT been kind to that dog after that. He probably thinks I am some kind of monster, but he keeps going after them. They know they can't go outside unless he is tied. I was hoping it was just misdirected play and just a puppy thing and we were going to have to train through it. He's not real responsive though. That's what I thought with the goats too at first.

(Bailey, on the other hand follows children around the yard and pulls their sleds up hill for them because she likes to take care of them and likes to "play" too. I wish I knew how to reliably get him to near there, or at least to ignoring children.)

I am going to think about this very hard. I'll start his strict boot camp while I think and see how he reacts, and make sure this isn't play that has run awry. I'm nearly 100% sure he's not an lgd puppy. I almost wonder if he would have been better as a house dog with constant discipline and being asked not to think so much on his own-thinking anything on his own seems to result in injured things. I highly doubt the breeder will refund anything no matter what. In her mind, the dog is fine and I am somehow doing it all wrong (and likely that i have ruined him). That was kind of what I was hoping to hear and how I could change. It looks like I'd be trying to make this dog into something he's not. She will probably not take him back. I also don't want him here, and definitely not as a house dog.

We're probably going to be done with puppies after this and Bailey's going to have to learn to be an only dog and enough for us and enough to keep our little farm property safe. I'm going back to deciding I don't like dogs except for Bailey. She's better never grow old and die.

Yuck, I was hoping to be told I was doing it all wrong.

I will preface this with saying I have no real world experience with LGDs. But I am so in agreement with what others have said about the idea that makes the rounds that there are no bad animals, only bad trainers. I've seen examples of psycho horses that were fine one day and the next would happily take your head off without warning. A few dogs too.

I have put one of our own dogs down when it, unprovoked, bit my 4 year old in the face. Didn't even have to think twice.

Rachel, all of the time and energy you have poured into this dog could be spent on a dog that would be a trusted working companion.
I'm so sorry that this is happening, I know what turmoil you're going through.

rachels.haven said:
We're probably going to be done with puppies after this and Bailey's going to have to learn to be an only dog and enough for us and enough to keep our little farm property safe. I'm going back to deciding I don't like dogs except for Bailey. She's better never grow old and die.
Click to expand...

Don't get discouraged over one bad seed.

Bailey would love to have one of her own species with which to romp, work, and snuggle on cold nights....it's just natural for a dog to want to have a social life.

There are soooo many good LGD pups out there....in fact, this is the first time I've even heard of one that would go after children, though I've heard of them going after livestock, especially when they've been poorly bred or cross bred with another type of dog(herding, hunting, etc.) Usually they LOVE kids, almost TOO much, and want to be licking them in the face all the time and dancing around them, bumping them with their big ol' butts and knocking them over with the huge wagging tail.

So many good, loving dogs that could help Bailey do her job....don't miss out on a good thing over this one bad thing?

so sorry Rachel dont let him ruin other dogs for you we have one now that is perfect for us. now she a Aussie, lab mix at first she was a pain killing birds not listening but she turned into a good herder and is great with all animals now. she even herd the pigs for me. she never showed true aggression just over zealous to do her job and lots of play if she had shown aggression she would have gone.

With all the training that you have put into this puppy, if it had been any other dog, you would have a well trained puppy. My dogs love the grand daughters and would lay down their lives for them. When I carried the two youngest, as babies, Trip would put himself between me and what he perceived as danger. The babies could pull handfuls of fur and he loved them. The puppy we have now adores the grands. I tell them that they are helping me train him. He does not paw or jump on them. he wags all around them and loves them.

As I read this it makes me sad .LGDs are new in my life pretty much .I know insanity is inherited. Once they get a taste for blood .Flock guarding is over .And if it even gets the notion to attack a child life is over. I lucked out.My first dog is amazing .Thinking Pyrenees/Anatolian and just my kind of dog lives with the flock .Comes to eat a goes right back to the flock .He will walk as far aound the fields as possible to avoid strangers .Pyrenees and Anotolian dogs are very defensive of thier pups and food . Other than lease training should be left with the flock of whatever. If possible.It is thier nature to shy away from people .I have read every thing I could find on this Breed .The longer I have them the more I love them .Ihave 8 .Pups should be bought young put with an older dog to learn how to behave. Worked with hunting dogs when we had them .Works with LGDs too.So all that being said ,Hot fence is a great tool for teaching dog boundaries. Shock collars also do wonders with hard to train dogs.However nothing will overcome the taste for fresh blood ,Lgds should never be fed any type of blood raw meat.Get rid of the dog is what I would do .Pure Pyrenees Full sisters one year old and there are five goats with them. Chickens go freely in with them.To many good dogs to put up with a bad one. 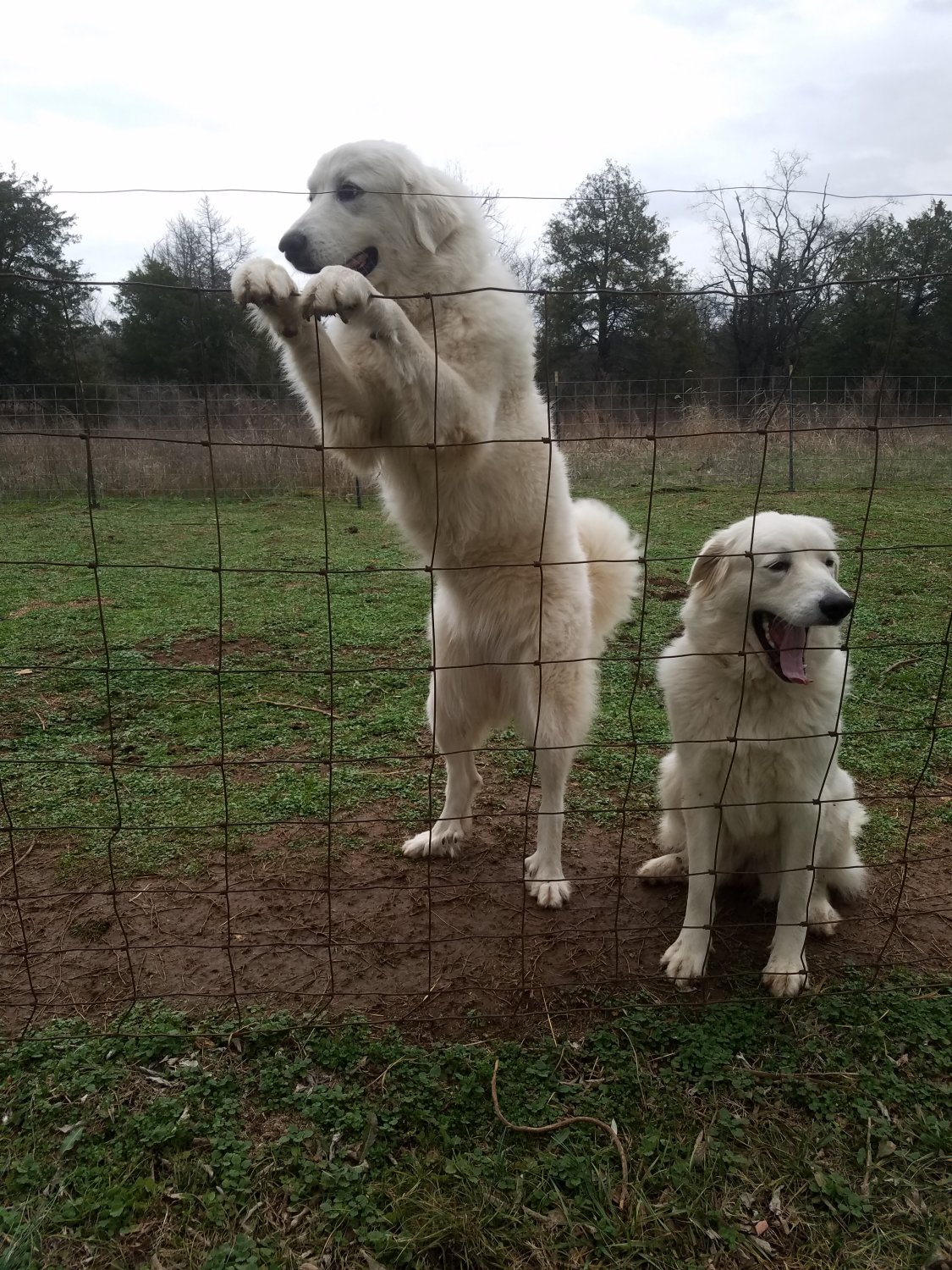 Hipshot said:
,Lgds should never be fed any type of blood raw meat.
Click to expand...

A dog doesn't have to be taught to love raw meat and blood, it's pretty much in their DNA. Mine get raw meat every chance I can give it to them but they don't kill their flocks.

i agree with beekissed stella my aussie/lab mix is a great working dog now but she has been know to kill chickens, ducks, rabbits, and one of my geese however she is now very well behaved to were i can leave my birds with her and all she does is watch them and of course the hussy stills eggs but thats better then killing my birds. i wouldnt trust her with my rabbits because of the fact we have wild rabbits around and that tends to get her going. that being said she will herd the cows just fine, along with goat( when we had them) and their kids, she also herds pigs for us and the birds now as well. i think there a large learning curve and all animals have to learn. she also goes hunting for doves with my husband and knows now what is expect of her on all fronts doesnt mean she wont mess up but she has learned alot just like we do, we have two cats a well that will kill birds and one that would go after chicks however now she can be trusted with them as well she actually guards them from other cats, and regularly kills snakes and rodents.