bottom pic is 24 hours after surgery (and shows the incision and such in case you’re queasy) and the top photo is from earlier today (48 hours post surgery).

She’s back to her sweet Bertie self (minus a leg). She definitely does not appreciate the cone. But walking and running and pretty agile for a goat in recovery from major surgery.

We take her home Friday and we’re gonna try to keep her inside with us for a week or so - ordered suspenders and a friend donated leftover size 7 diapers and have some old T-shirt’s that we will fashion to just keep her incision covered so she doesn’t have to wear her e-collar.

Everyone very pleased with her peppy attitude today.

Had a talk with the kids about how different doesn’t mean less than. Or just because something changes doesn’t mean it can’t be a new kind of beautiful or a new “normal.” They seemed much happier after being able to see her and see that she’s still very much herself. 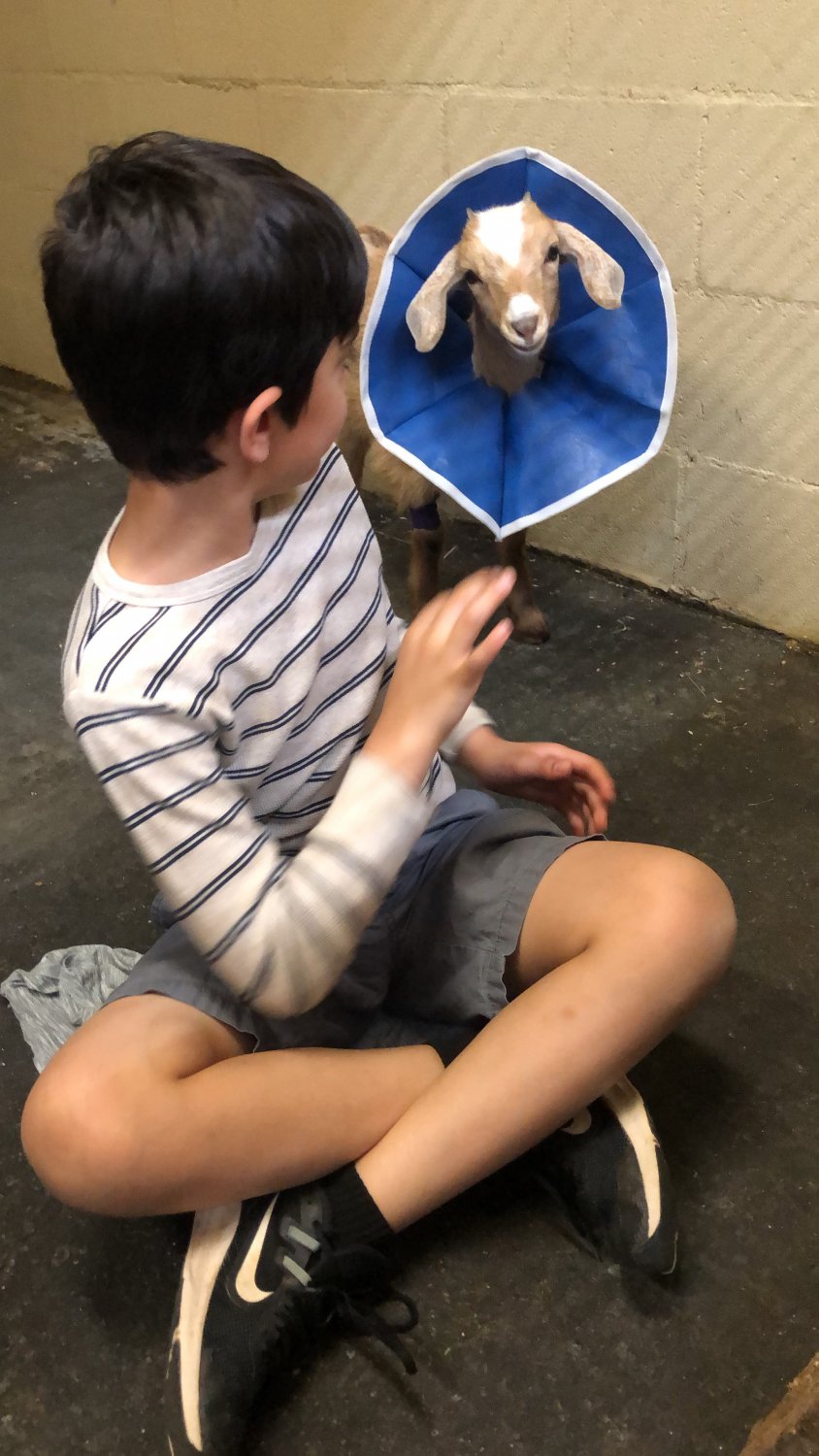 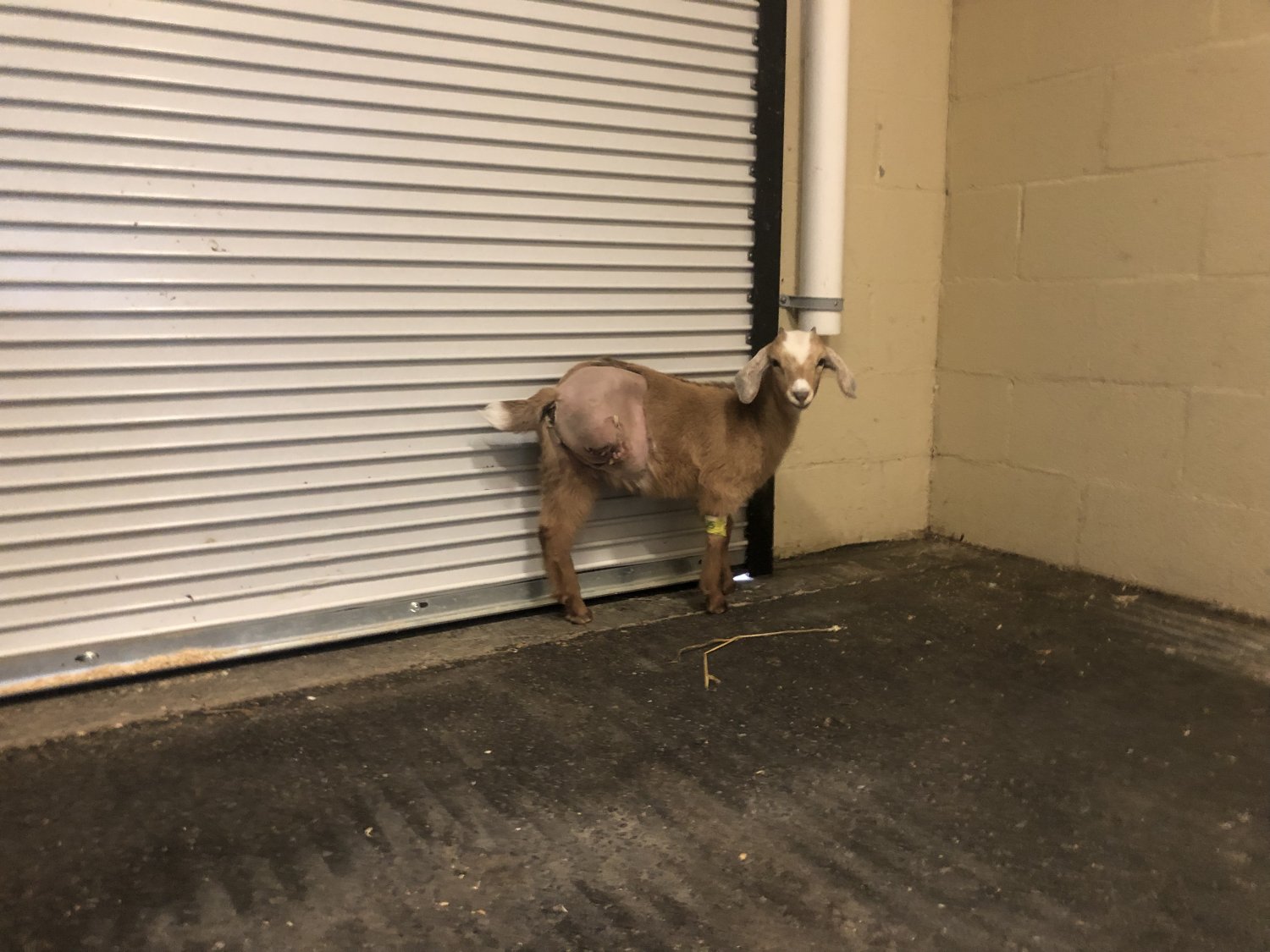 Yay Bertie! She looks very perky and well for what she's been through.

...you are one sweetheart

Bertie is back home 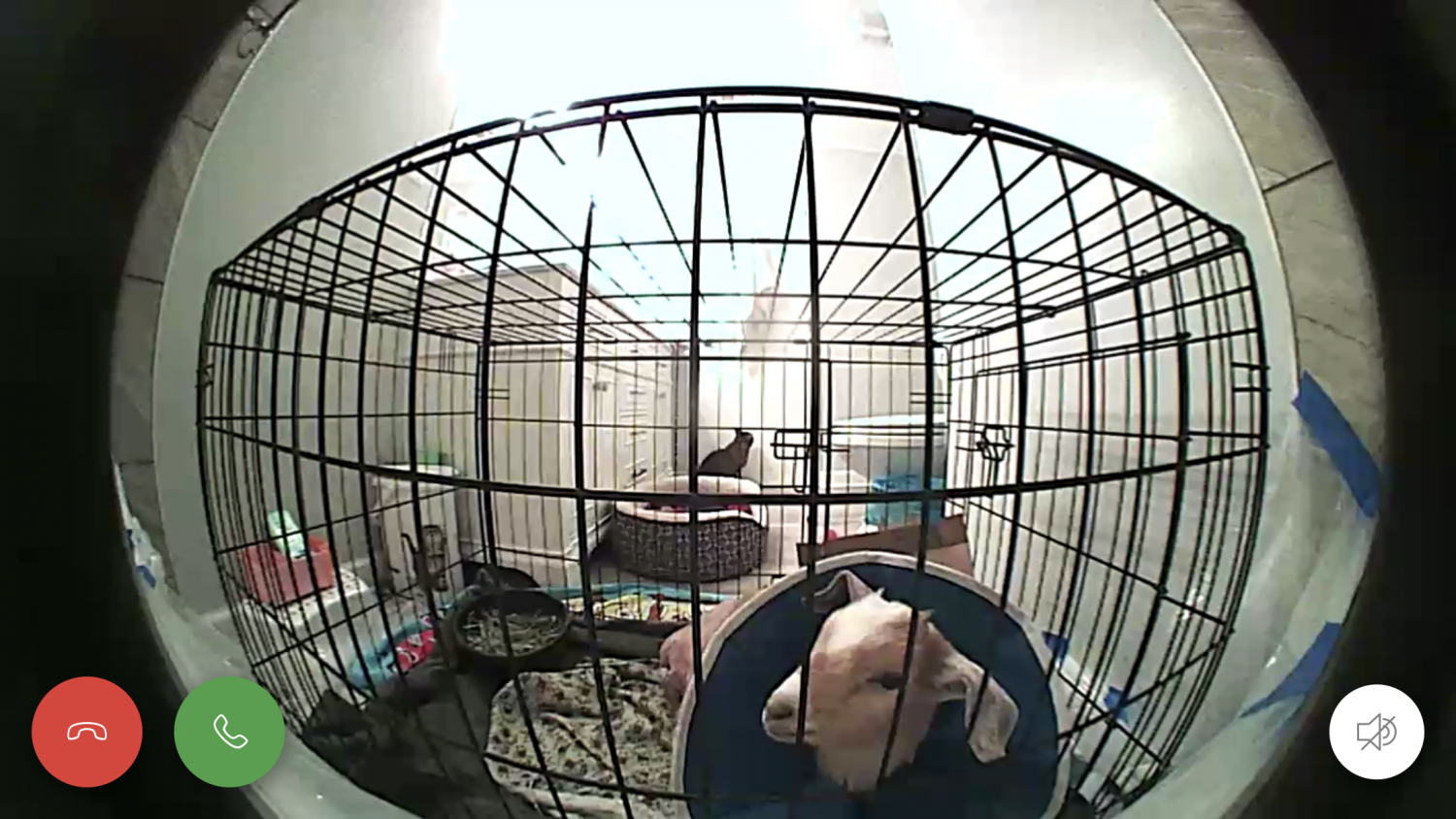 She spent the first night inside with the cats (who were not happy about being cooped up with her all night).

And reunited with mama Lumos and Dobby the next morning 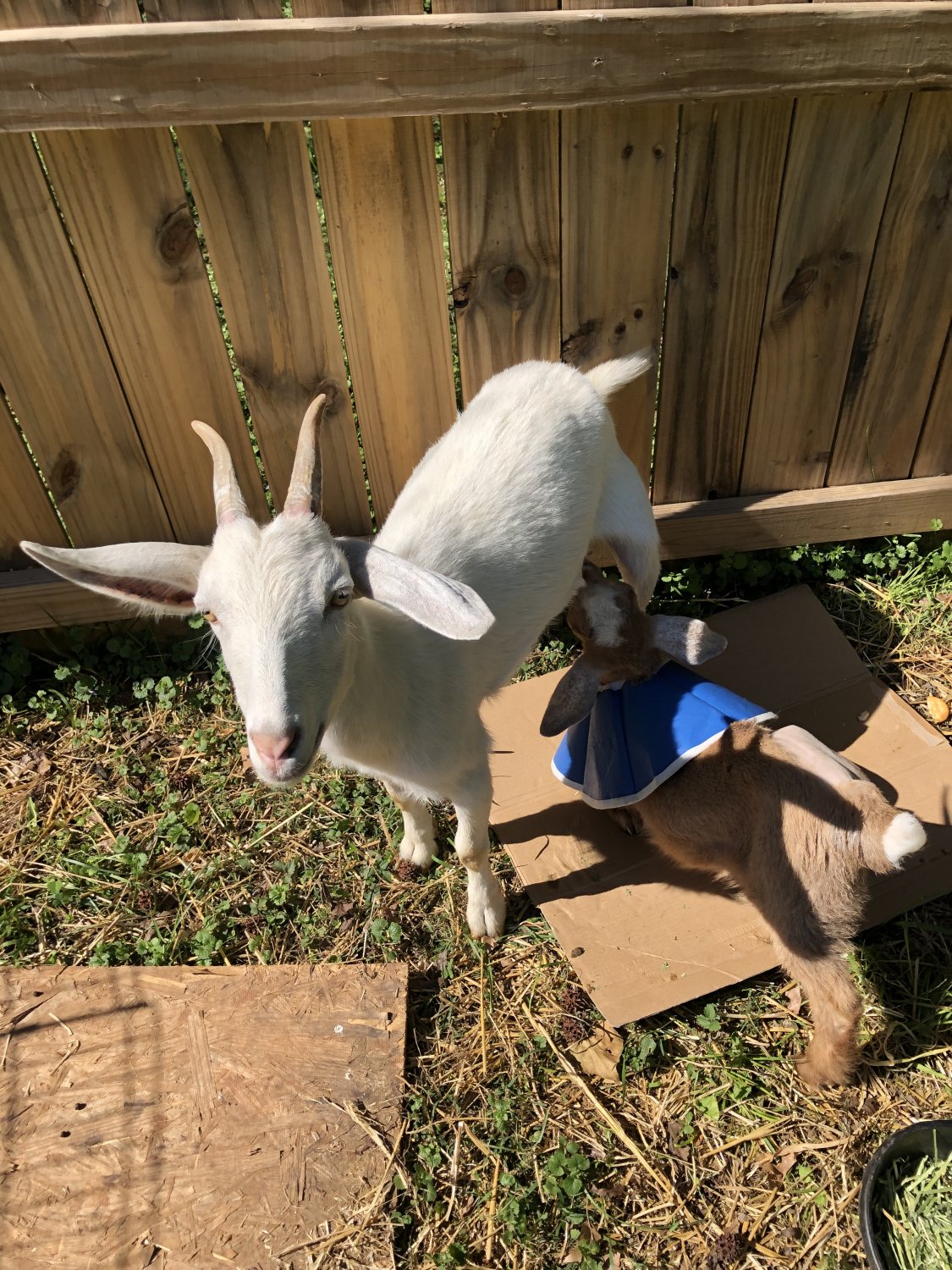 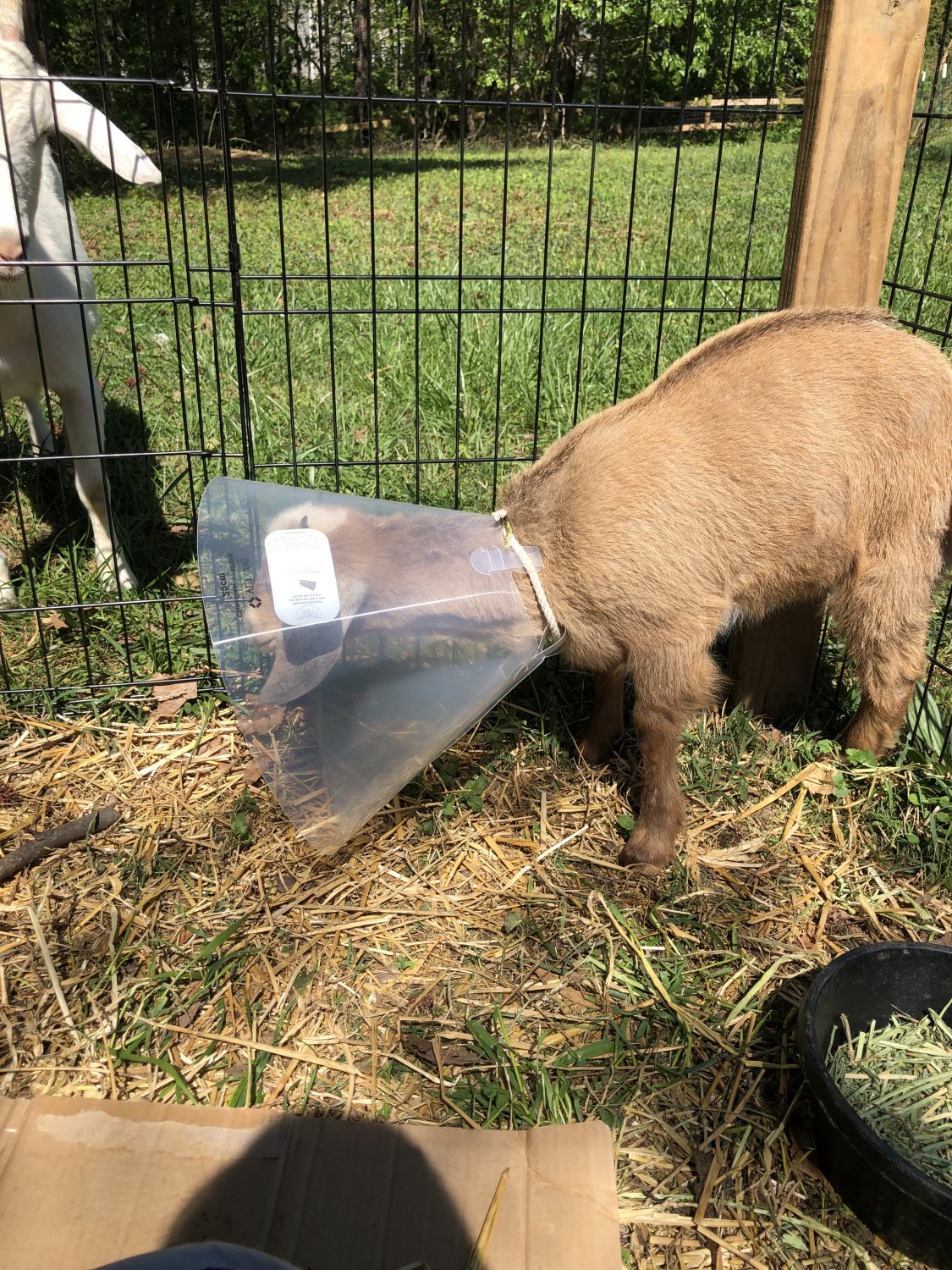 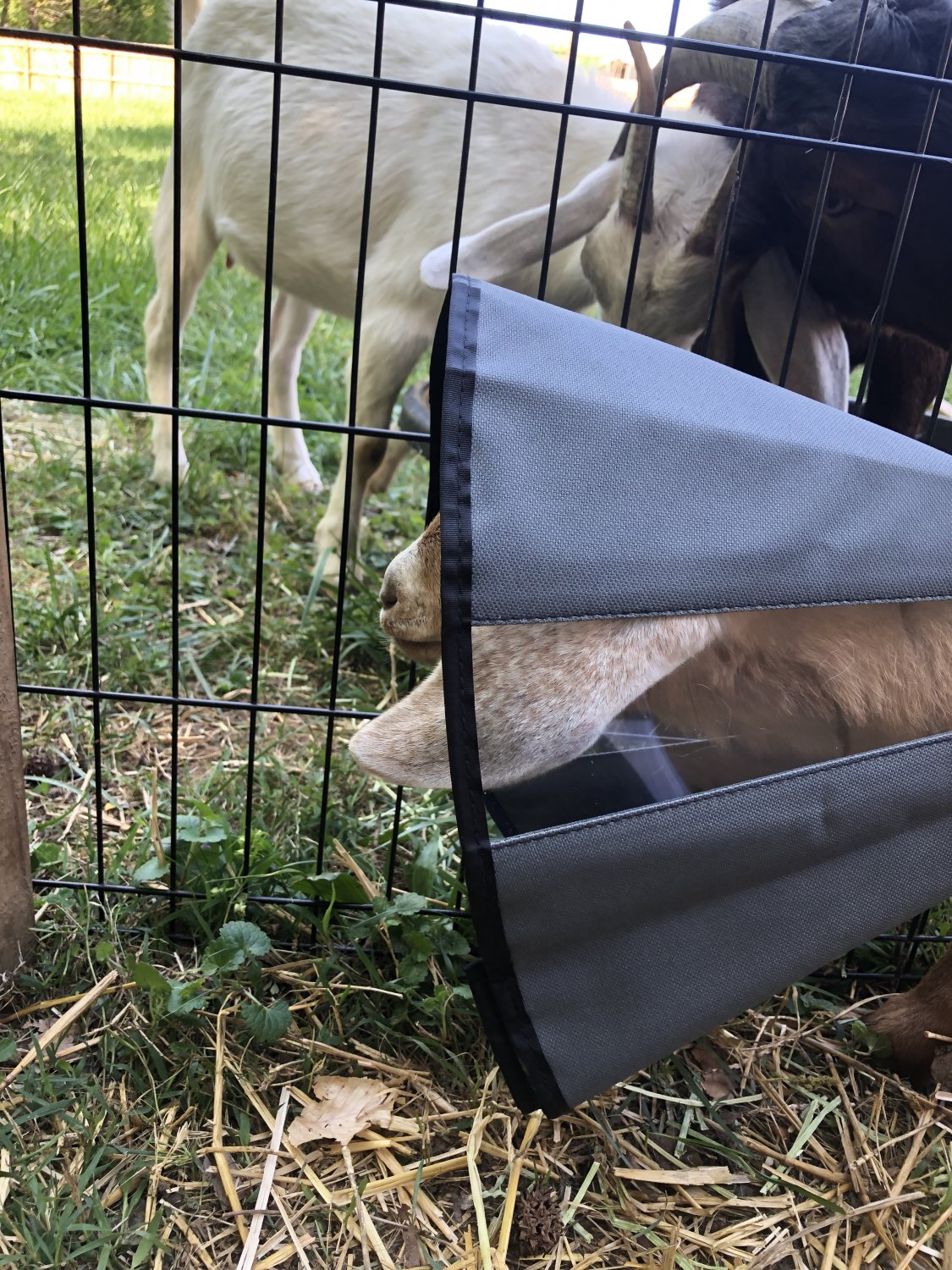 But the elizasoft M/L 8.5” that the vet *finally* provided was JUST RIGHT (after exhausting all options at pet stores around). 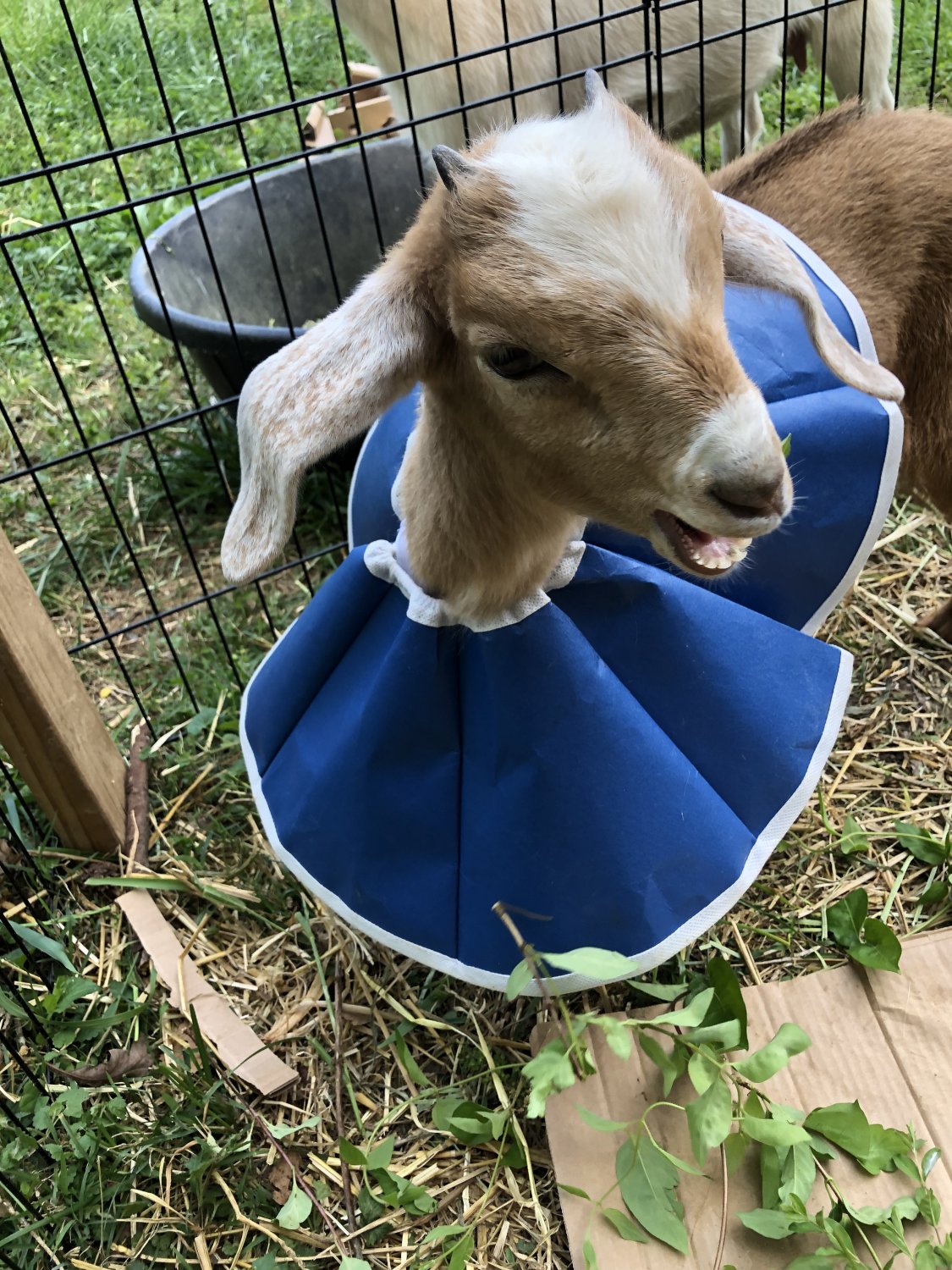 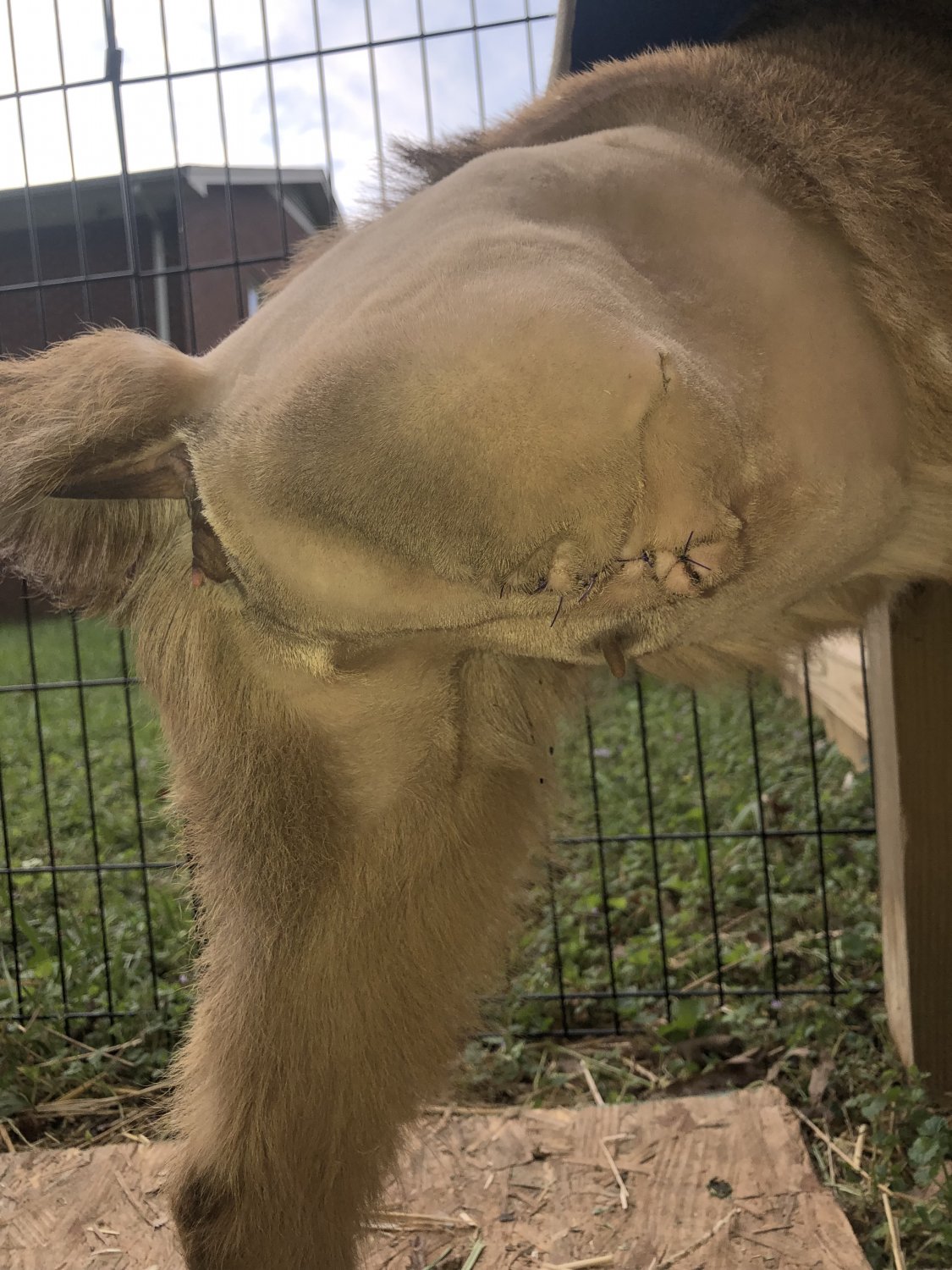 Incision looks good checking twice a day minimum (more like ten times a day). She’s eating well, stealing milk from an unamused Lumos when she can and trying to play with Dobby through her pen.

Follow up this week and stitches out next week (although they are the dissolving kind so I dunno that it’s necessary- rather they stay in as long as possible anyway). 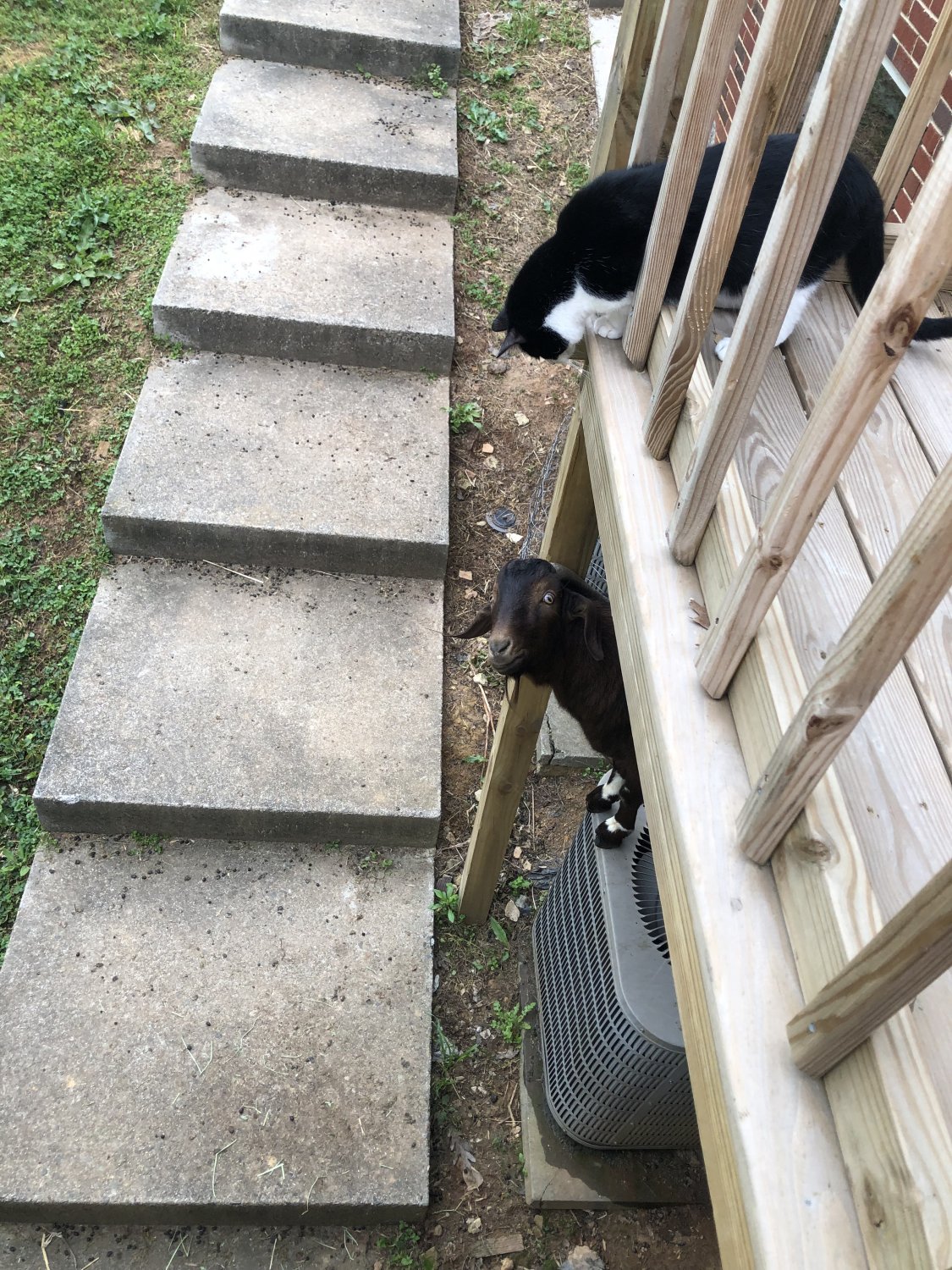 She's adorable. I'm glad to hear you have her home now. That's a very healthy looking surgery site.
That's a cute picture of your cat and Dobby, doing what goats do best.

Bertie, you are a awesome girl ! So happy to have you back at home with your family........

Bertie has her stitches out a couple weeks ago (see bottom pic) and it has since healed up completely.

I’ve been keeping her in a bigger outdoor area that’s still separate from the others (out of caution since she’s still prob 50 pounds smaller than my wether) but the last few days she’s protested ALL day very loudly. So she’s been out about 6-7 hours a day with her mom and Dobby.

She’s faster than them both on three legs.

I asked the other kids if they were still sad about her losing her leg and they both smiled and said no. How could we be sad if she was just so happy all the time. 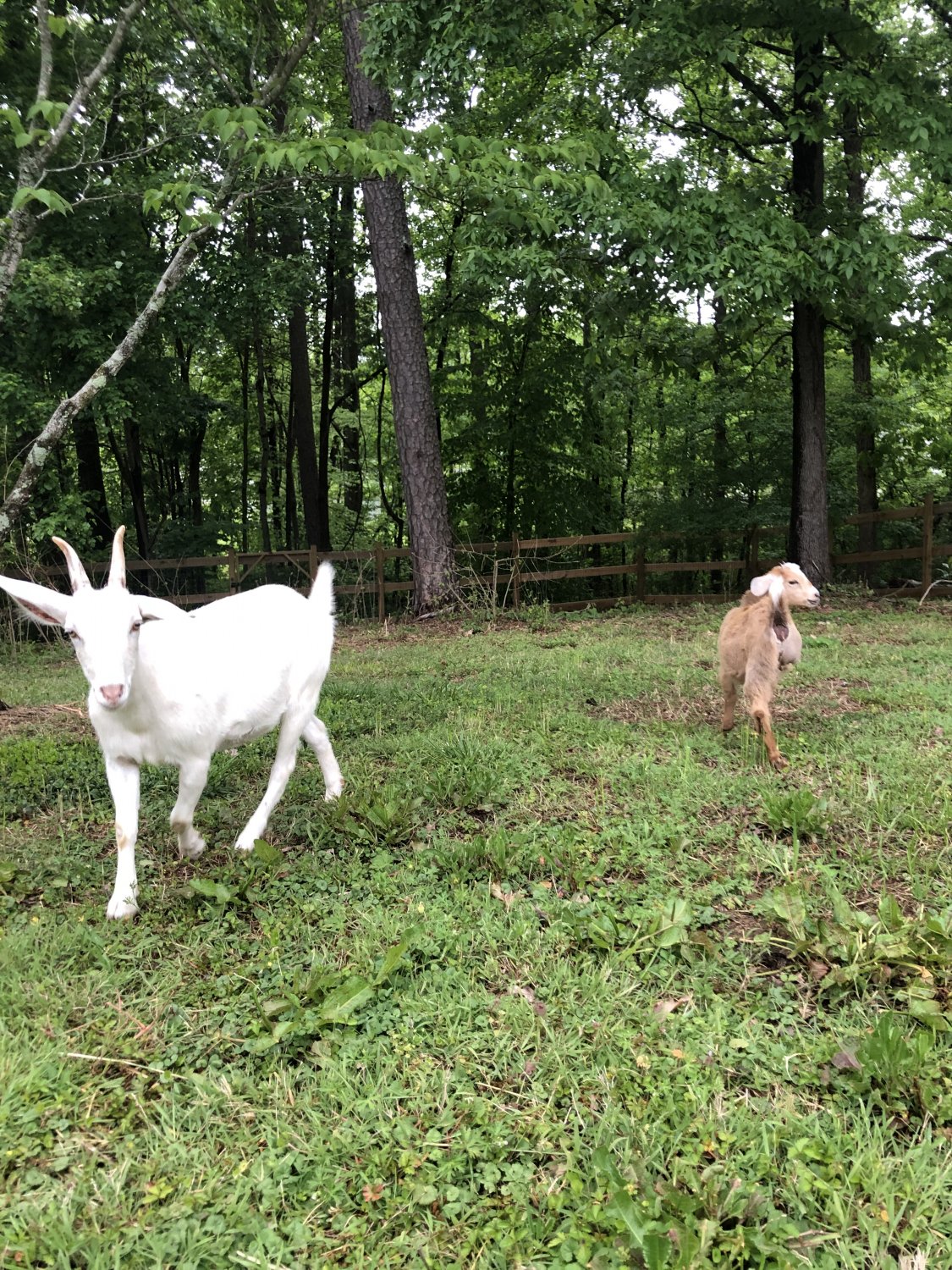 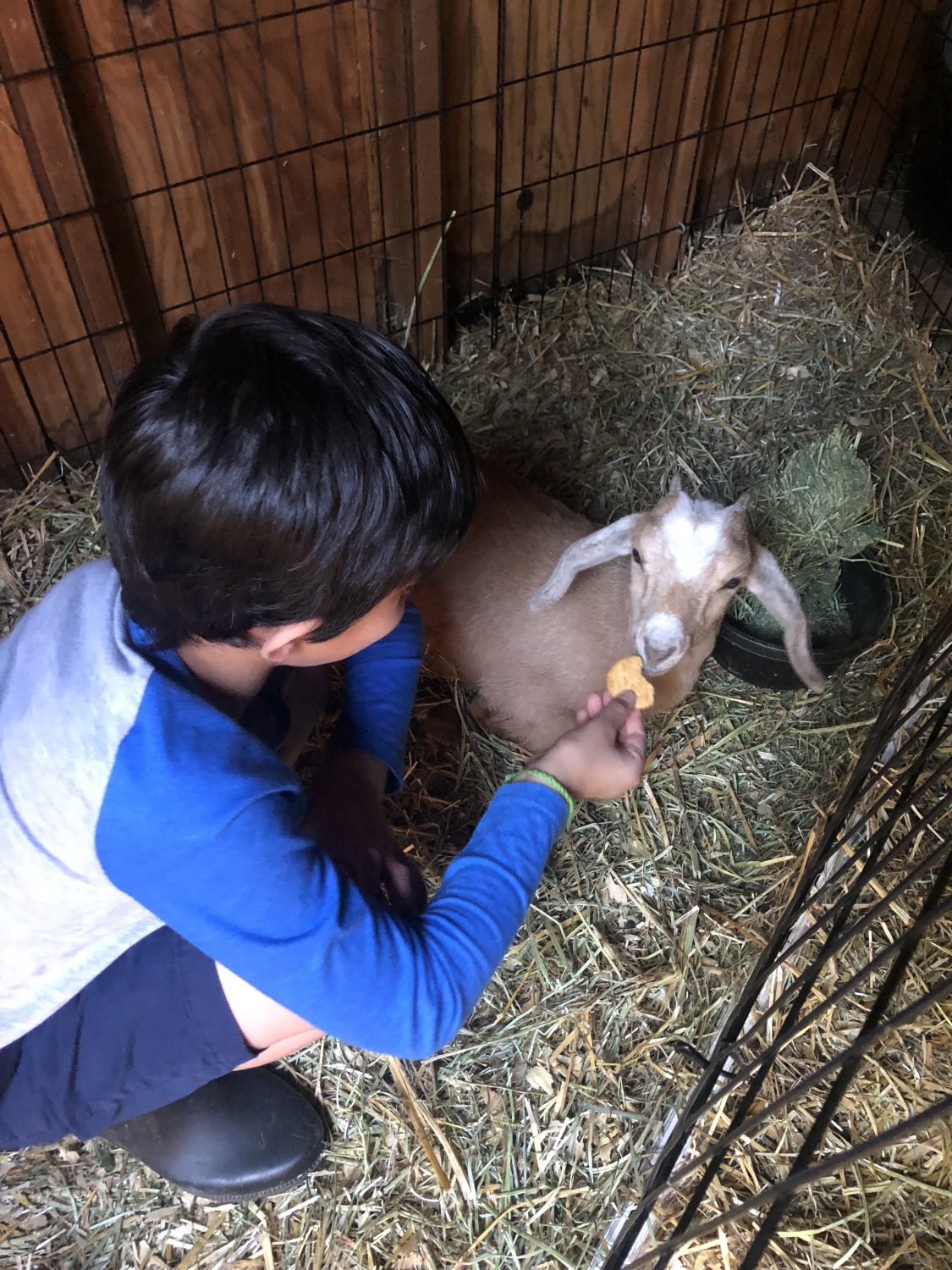 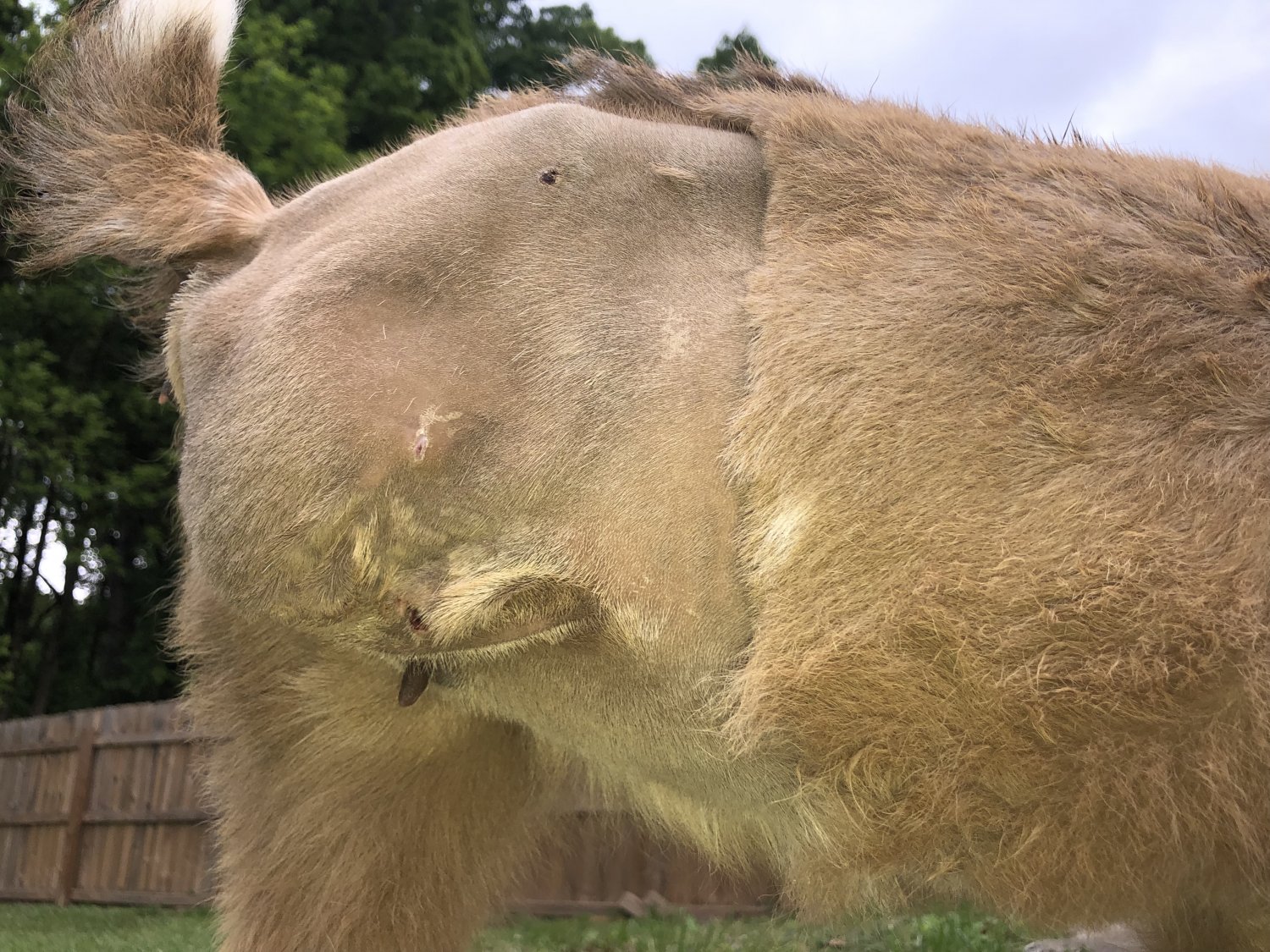 keep everybody on their toes trying to keep up with you