That really does look nice, and the contrast of the mulch sure sets things off. Hope ya get some water for the sprigs, but not the amounts south of ya or they will wash out. We are constantly finding shards of colored glass, thick medicine bottle blue, green, and brown.....

Surely you don't mean the sand I covered the Bahia with! DH's arm will hurt a little when he overdoes it......like today and the last few days. But he is light years away from where we started. He is so happy that he had it done.

Thank you @Mike CHS I appreciate it.

@CntryBoy777 we find glass all the time, dug some up today. It was thick, like canning jar bottoms, threaded tops and it spoke of times gone past.

Oh yes, I DID mean that lovely "soil" you planted the grass in

Bay -- I wish I could give you sprigs of some of the grass I have!!

Update on pasture #2. We sprigged a lot of bare dirt, then covered it with a layer of wood chips on the strip between the earthen berm and the front fence. It's looking good.

Our neighbor Jerry, who lived on our property as a boy, collects scrap metal. We finally cleared away the briars so we get to the wad of metal that used to be an automobile. Our neighbor Robert came over and between him, me and DH, we dragged it out. Jerry came over with his truck and we loaded him up. It was the back end of an old Studebaker that Jerry remembered as a child. It belonged to people who rented the house after his family moved out. Then, being the complete idiots that we are, we bought 2 big hogs and turned them out. With gusto they systematically began to dig huge pits that looked like open coal mines. 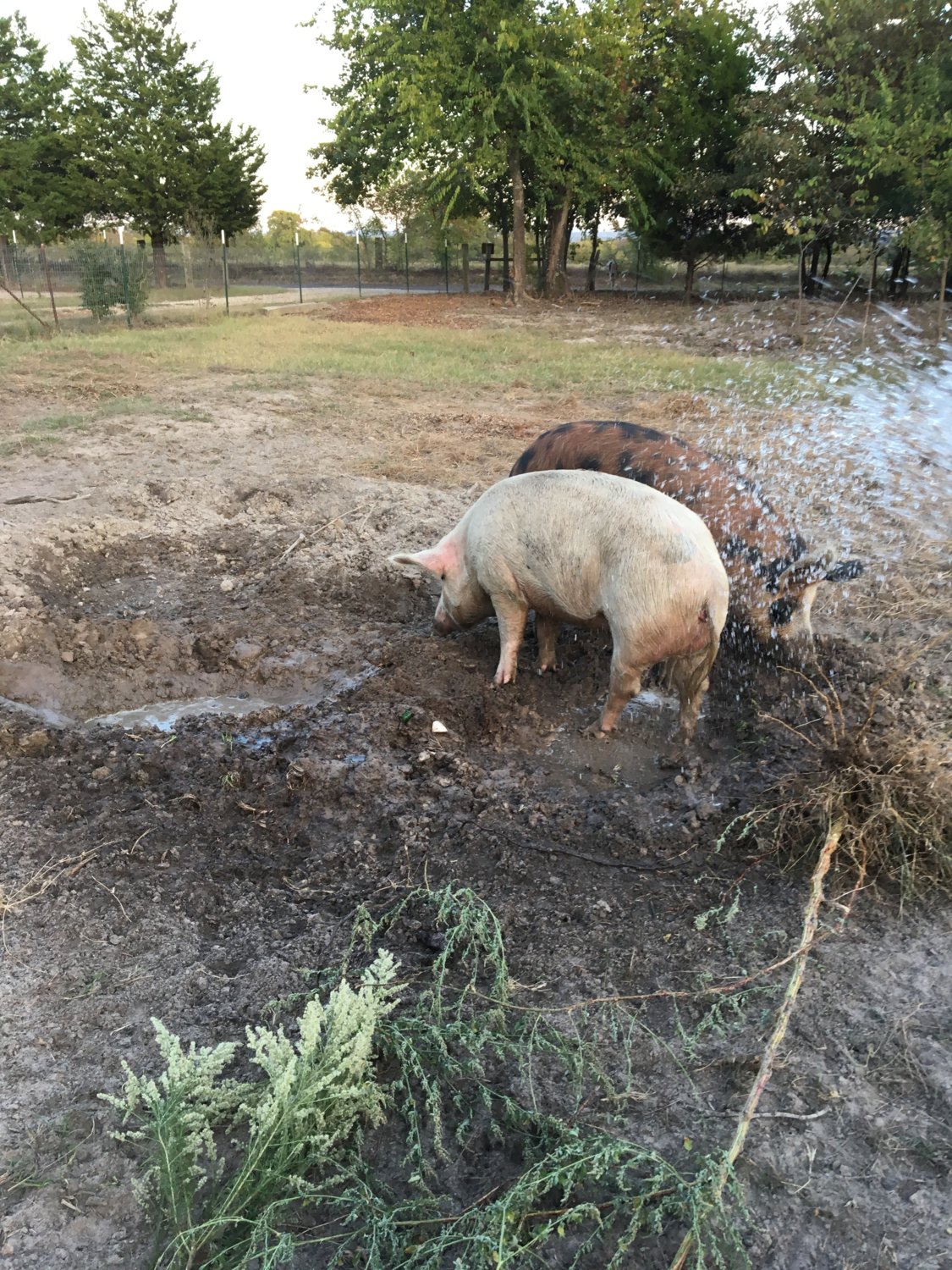 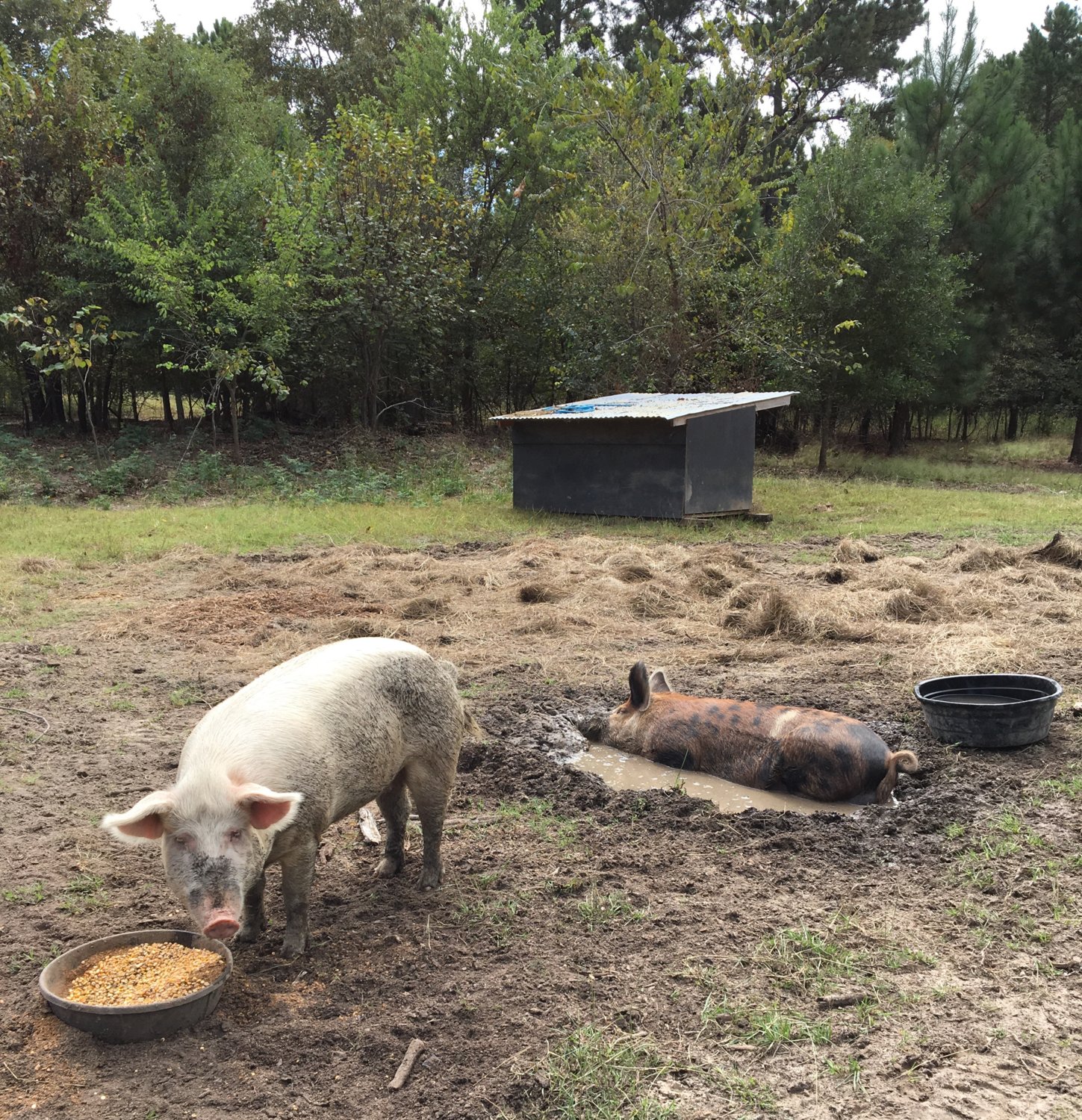 We dragged the Hawg Hut in there for them. The good news is they go to slaughter November 6 and we can smooth it out and seed it with a clover mix, chicory and rye grass. While they are wreaking havoc on the pasture, they haven't discovered the sprigged part in the front. So for now, pasture #2 is on hold.

We went back to work on pasture #1. We dug sprigs of Bahia and Bermuda from the side of the road out front. We discovered 3 or 4 feet of road under a blanket of grass! 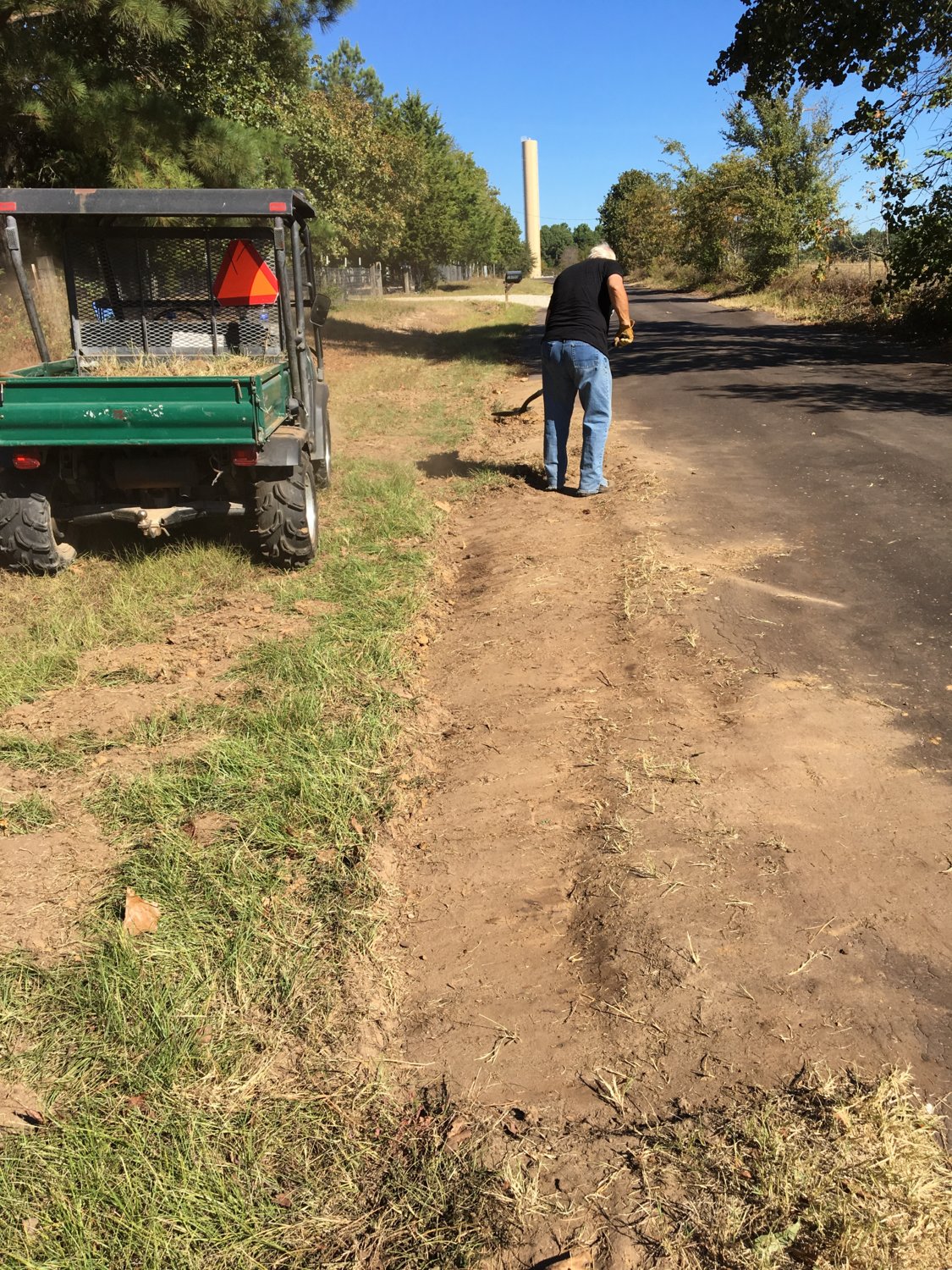 We filled the back of the mule 3 times this week and did a darn fine job of cleaning off the road! Then we sprigged the grass in trenches and covered it up. 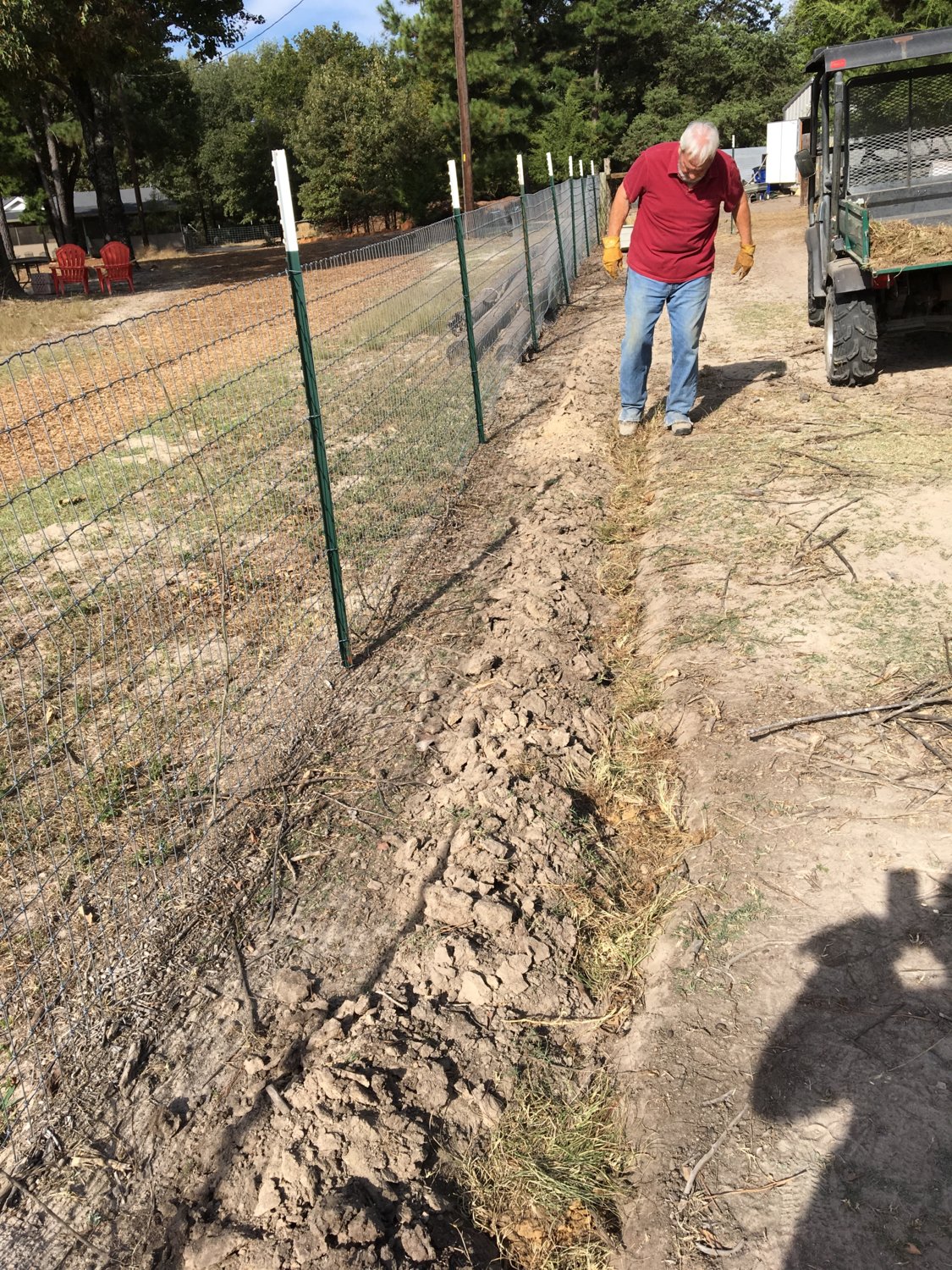 This morning we had a load of grass in the mule that we dug yesterday, but we're too tired to sprig it. So we dug trenches, sprigged and covered it up. It has been so dry that the beach sand we have that masquerades as soil, is like walking over a sand dune. The dirt was hard packed and hard to dig in, but once dug up, turned to fine silty powder. Rain is forecasted for the weekend, so we were pushing hard to get the grass planted. The flip side of that, the rain would wash out the powdered sand and uncover the grass we have worked so hard on. So we mulched over it with wood chips. DH ran the tractor and I raked. We put a thin layer, just enough to hold the sprigs in place, keep them from washing out and provide some humus to hold in moisture. We spread 37 front end buckets of mulch. We were utterly exhausted. We staggered to the house. Even our feel good hurt. I got a small glass of wine to relax, DH refilled it and got some too. Four glasses later, us practically non drinkers were pretty loopy. We still hurt, we were still tired and sore, but we no longer cared. Bring on the rain.

And you should sleep like a baby tonight! Wine - it does a body good!

Wow, what a lot of work! Sounds like someone isn't taking care of the road if you found so much of it buried.
Seems that DH's new shoulder is working really well

Today I sowed grass seed. In pasture #1, I sowed 5 pounds of chicory, 8 pounds of white arrowleaf clover, 8 pounds of white ball clover, 50 pounds of Kentucky 32 non endophyte fescue and 50 pounds of rye grass. We didn't have any rye grass seed, our 2 year old grand daughter wanted to come over, so we met her mom at the library and picked her up. We took her to Tractor Supply, bought her a new pair of pink rubber boots and a bag of jelly beans. We got 200 pounds of rye grass seed. DH pulled his back loading the bags in the trunk of the car. He is pretty miserable now. Then we took her to Dollar Tree where she picked out a puzzle, color book and colors.

I filled a little bucket for her with rye grass seed and a bigger one for me. She clenched her tiny fist full of seed, drew back and threw seeds in her hair, down her shirt, in her new boots and some hit the ground. She threw seed at trees, made tidy little piles of seed and hung out with Mamaw. I explained to her that it was going to rain and the seed would grow into grass for the sheep to eat. When we finished with the 50# bag of seed, she was ready to go watch Disney with her Papaw.

I sowed 100 pounds of rye grass in the pipeline pasture, 50 pounds of fescue, 5 pounds of chicory, 10 pounds white arrow leaf clover and 10 pounds of white ball clover. Somewhere in between that, I took our precious girl home. She told her momma that she planted grass seed, it's going to rain and it will be green! Adorable.